One of the most interesting towns I've had the pleasure of visiting was way off the beaten path. Located about an hour's drive east of Bentonville, Arkansas and an hour southwest of Branson, Missouri, Eureka Springs is a most unexpected surprise if you're just passing through. The town has a population of 2,000 but the cozy-yet-bustling Main Street will have you thinking the community is much larger.

The highlight of the community is its vibrant commercial district but a large attraction is the Thorncrown Chapel, which has been noted as extraordinary in various travel guides. There's also a railway museum! 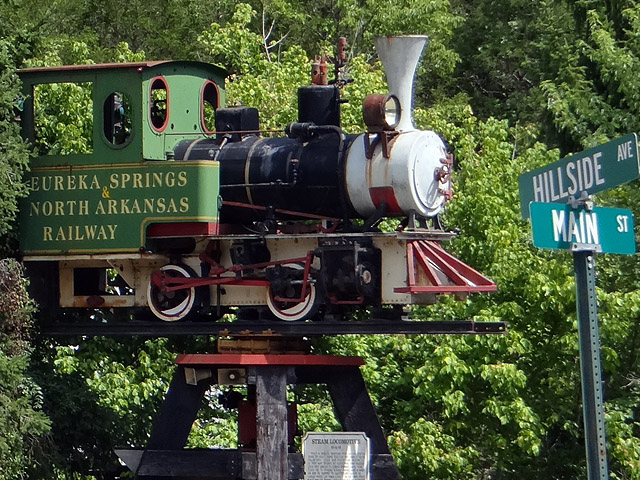 I will be the first to admit that this place ain't too easy to navigate:

This is largely due to the fact that it is built on a unique swath of mountainous terrain, its roads winding around hills and cliffs, with some buildings having multiple entrances from different floors to different streets. All road intersections occur at bizarre oblique angles. The town was, of course, built around springs that had been heralded by its initial settlers as magical. The rumors had so spread that at one point during the late 19th century (according to Wikipedia, I couldn't find the census statistics) the city was Arkansas's second largest (with only Little Rock being bigger).

How this town was built I'm still amazed. Buildings were built on steep slopes, into hills, above and through ridiculously interesting rock formations... This is not at all unusual there: 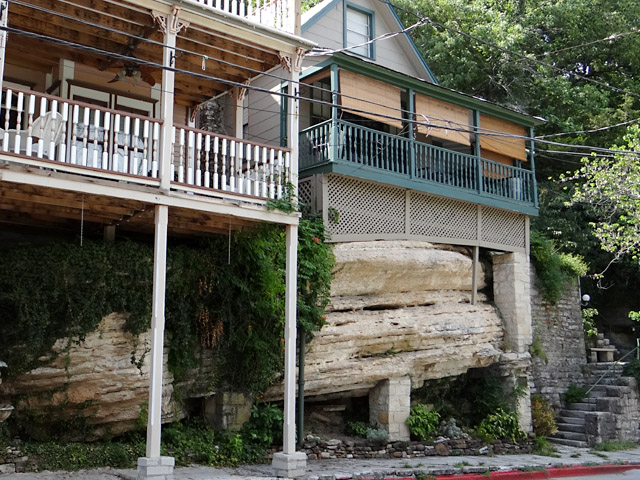 And believe you me, Eureka Springs definitely earns its nickname of "The Stair-Step Town." 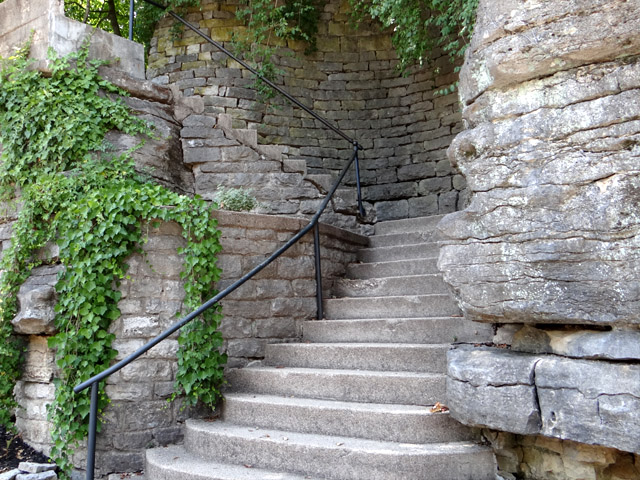 My favorite part of the city was Spring Street. No Mickey D's here; the street is flanked with enough stores of artisinal vendors to make a hipster from Brooklyn jealous. 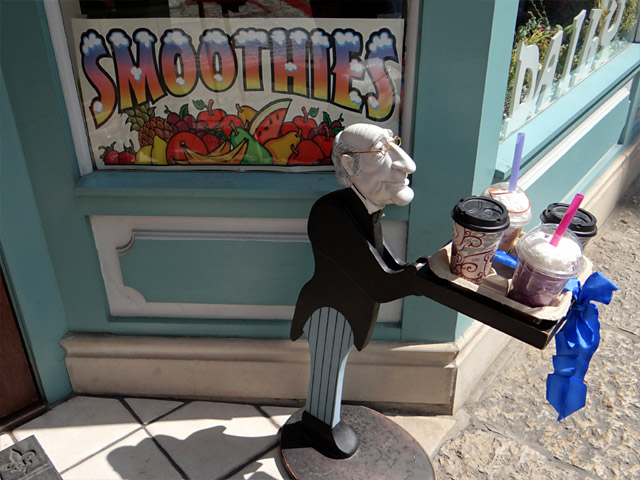 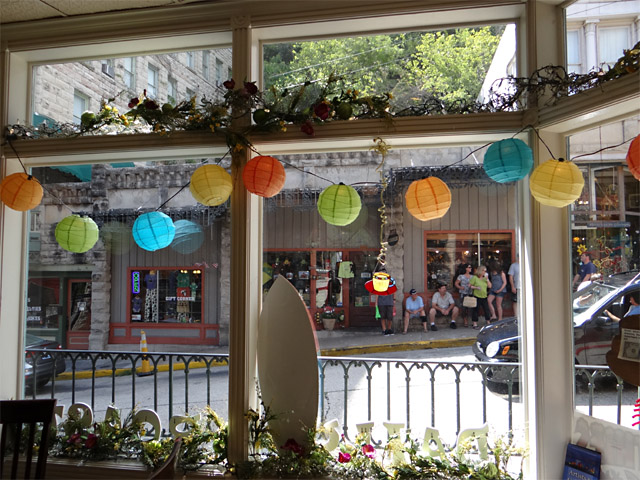 Basin Spring Park is a unique venue with stunning exposed rock walls and artwork and sculptures around every corner. 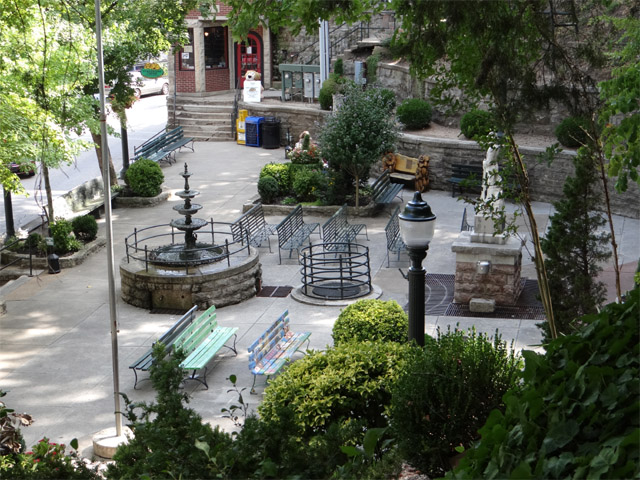 Ah, yes, the post office! Eureka Springs's post office was established October 21, 1879 and has been housed at its current site for most of that time. The Eureka Springs post office is located a block off the Spring Street drag and was built in 1916 with federal Treasury Department funds. The stately building has old-style P.O. boxes. This said, renovations have been undertaken. Regardless, it's good to see that this building is still in service. 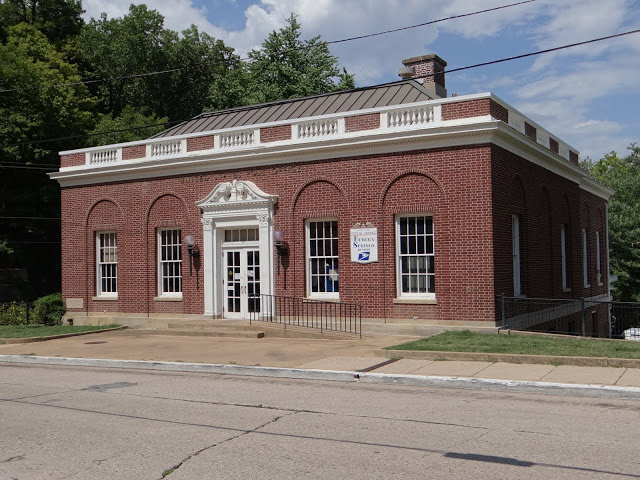 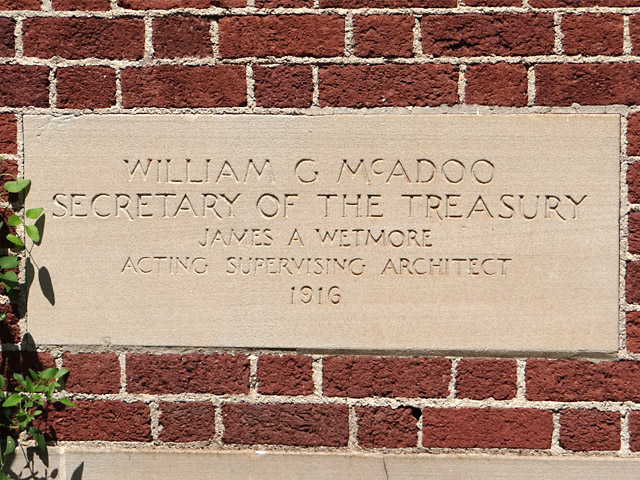 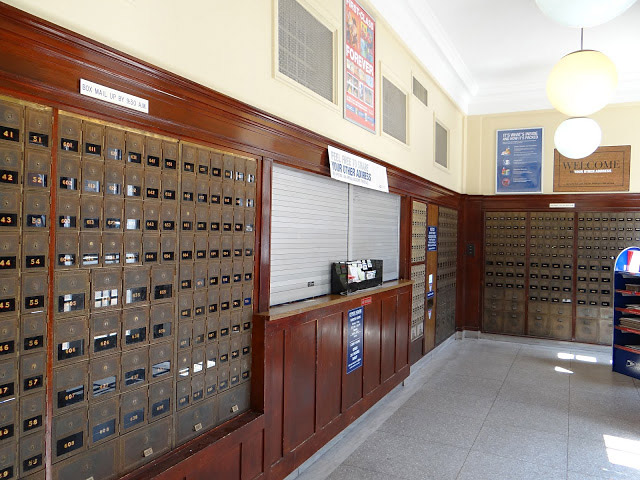 Traveling deep in the Appalachian Mountains along Interstate 80 in Pennsylvania you might be surprised to see the destination accessible by taking exit 192:

Yep, it's the Jersey Shore! Well, not the Snooki type. It's the town of Jersey Shore in rural Pennsylvania. Though interestingly enough, the name was just insulting to the Garden State 200 years ago as the TV show of the same name is to present-day dignity. Here's the situation (pun intended), courtesy http://www.usgennet.org/:


The first settler, Reuben Manning, ... was the uncle of Forster, who at that time owned and occupied Long Island, in the river opposite these surveys. They were both from Essex county, New Jersey, and from the part known at that day as the "Jersey Shore." As the settlement grow it came to be called "Jersey Shore," because Manning and Forster were Jerseymen. At first the name was applied in derision by the Irish settlers in Nippenose bottom, across the river. The place was named Waynesburg in 1805, but the title, "Jersey Shore," had obtained such notoriety that it prevailed, and when the act incorporating the borough was passed it distinctly said that the place "shall be called and styled the borough of Jersey Shore." That legalized it, and by that title it has been known to the present day.

Jersey Shore has had a post office since 1805. Today the community (pop. 4,300) has a pleasant Main Street. This article on nj.com describes more of the daily life around town.

The current post office resides downtown and has been in service since 1960. Here is the Jersey Shore post office in 2012: 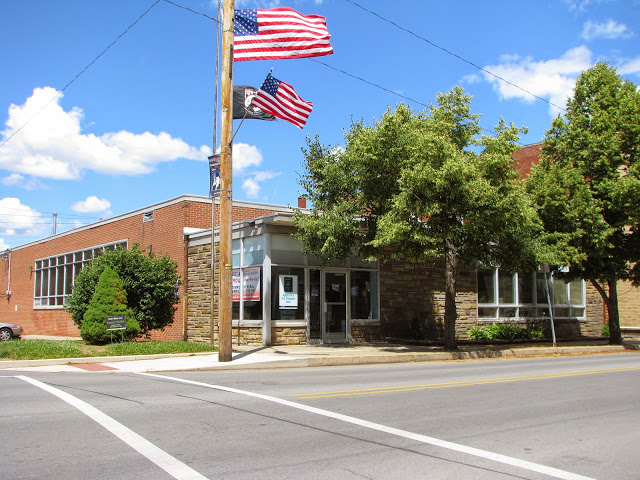 A modern mural depicting some historic buildings in the community is painted at one end of the lobby: 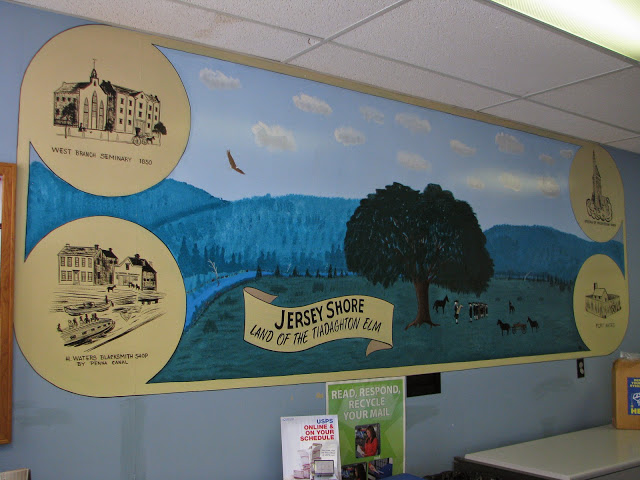 It was interesting to research the meaning of the central inscription: "The Land of the Tiadaghton Elm." As the Williamsport Sun-Gazette explains: "The Tiadaghton Elm Ceremony is celebrated because the Fair Play Men, who were settlers that moved out of the Philadelphia area to the Jersey Shore area, decided they wanted to be free from Britain's rule and signed their own Declaration of Independence on July 4, 1776, without knowledge that the Continental Congress was creating its own Declaration of Independence." You can find out more about the Fair Play MEn settlers here. 'Til next time!
Posted by Evan K. at 9:30 PM No comments: