Several have gotten me thinking about the U.S. Post Offices on Puerto Rico lately... 1. The island has been in the news of late. 2. The Living New Deal has been adding some great photos and information about F.D.R.'s impact on the island by way of the work of various New Deal agencies. 3. When writing this Postlandia entry last month ranking U.S. states by number of active post offices, I had to manually de- and re-sort Puerto Rico since the territory outranked three states. 4. Our friend Jimmy Emerson, DVM, having visited all 50 states, recently snagged a few photos from the island. 5. Now I can show you some awesome photos of Puerto Rican New Deal post offices scanned at the National Archives!

Let's play a game we're calling Basic Postal Q&A: Puerto Rico Edition!
That seems good for now. So where can you see some pictures? Your first stop should always be the PMCC Online Post Office Photo Collection: Puerto Rico page. We're presently nearing 27,000 photos, of which 54 are from Puerto Rico. So we've presently got a bit shy of half the island covered.

Ponce:
Now the Atocha Station post office, what had been Ponce's main post office was completed in April 1933, meaning construction was begun under the Hoover administration and completed soon after F.D.R. took office. 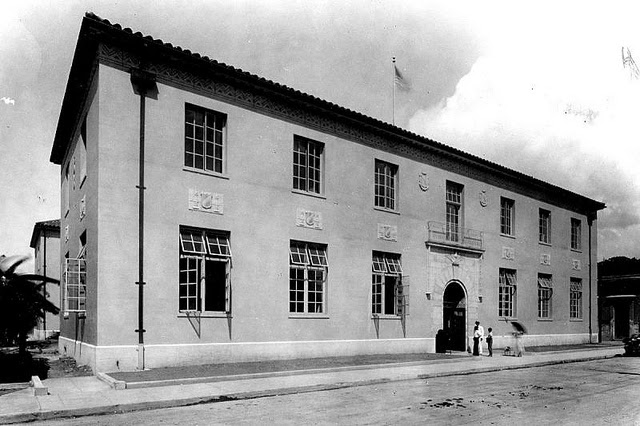 Mayagüez
Completed in 1937, the F.D.R.-era Mayagüez post office is the only one in Puerto Rico for which New Deal artwork was created. In fact, the post office houses two murals, which were installed in 1940. Titled "The Indian Mail System" and “Receipt of First Official Spanish Mail in the Island of Puerto Rico in 1541,″ the works were painted by Jose A. Maduro. You can see photos taken in 2017 of the post office and the artwork, courtesy Jimmy Emerson, in this album.

The following photos were taken in 1937 and 2000. The latter picture was taken by Postlandia friend John Gallagher. 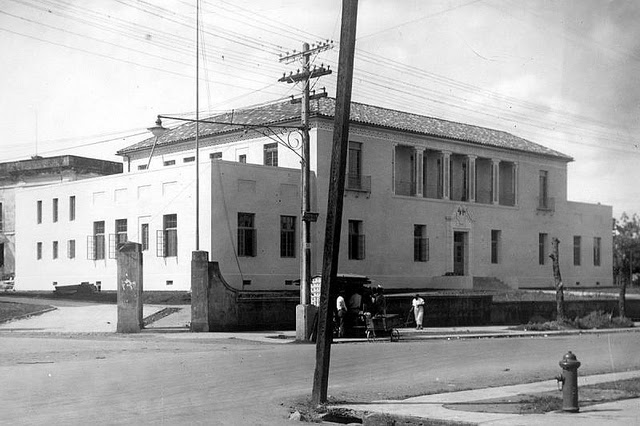 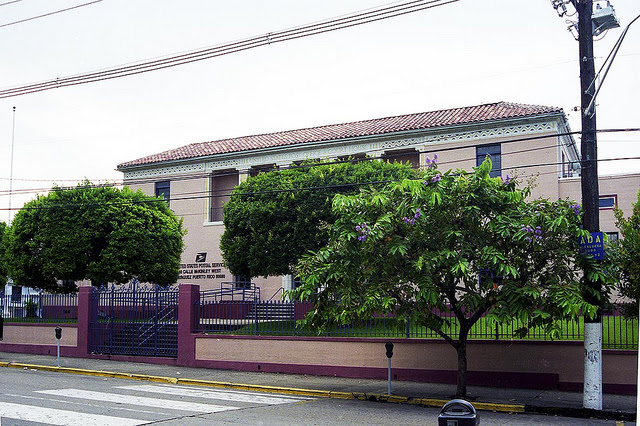 Perhaps the most spectacular post office facility in Puerto Rico is [what is now known as] the Jose V. Toledo Federal Building and U.S. Courthouse in San Juan. You can read more about the building's history at Living New Deal here. The facility was originally constructed in 1914, with its iconic towering addition built in 1940. While primary mail processing operations have been relocated, a postal station: the Old San Juan Station, is still housed in the historic facility. 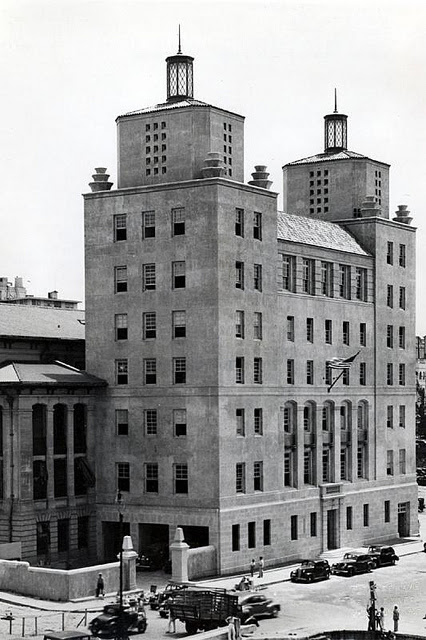 Celebrating a Century in Merrill, Wisconsin

USPS and the local community teamed up last week to celebrate the Merrill, Wisconsin's historic post office building centennial. The building, located at 430 E. Second Street, opened April 17, 1917 and is still in service.

This photo of the facility was taken by Postlandia friend John Gallagher in 2005: 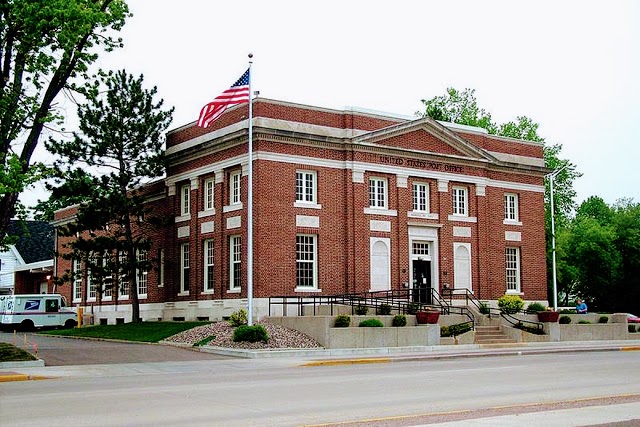 To commemorate the occasion the Postal Service and Merrill Historical Society set up displays and exhibits featuring historic artifacts and photos at the post office. A press release [somewhat rearranged by yours truly] describes the following special activities undertaken on Saturday, April 29:


Retired Letter Carrier Ron Behm was outside the post office building with his dog sled team as a reminder that mail didn't always arrive in a motor-powered vehicle. Postmaster Joelle Nelson and [Milwaukee-based] Lakeland District Business Development Specialist Dave Janda were available inside the Post Office to share the many ways the US Postal Service has changed and the services they currently provide. ... Behind-the-scenes tours of the Post Office led by retired postal employees were given to participants in the Merrill Historical Society's 2017 History Hunt. The event also took participants out to the country to visit the current/former locations of 12 rural post offices and learn about some of the area's colorful history.

The Merrill Historical Society uploaded several images from the 2017 History Hunt, of which I snagged a couple. Loving that birthday cake! 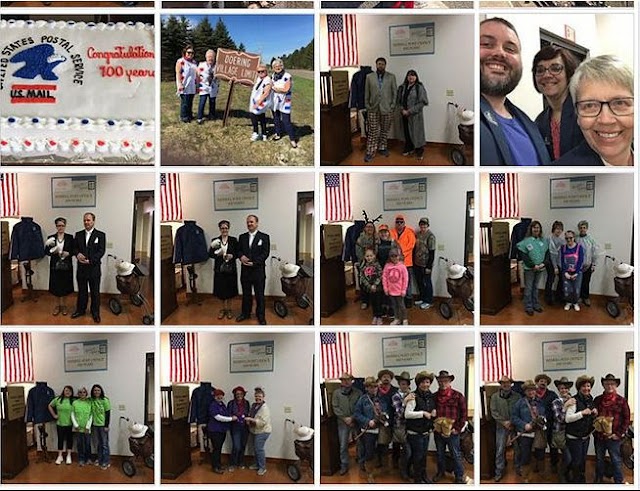 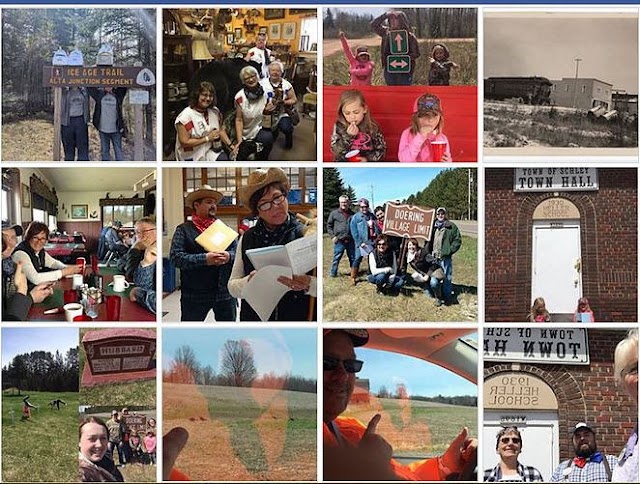 The History Hunt took people to society-proclaimed "obscure places" in Lincoln County, all of which housed post offices a long time ago:
Wisconsin's WJFW reported from the event, led by Postmaster Joelle Nelson, who has worked at many Wisconsin post offices over the years: "A trip to the back rooms reveals locked passageways for postal inspectors to secretly observe employees through fake vents. Upstairs, an empty old safe with a huge iron door stands open. Glass cases in the lobby house pictures and items from 1917, 1967, and years in between. Nelson's favorite feature is a giant glass skylight in the main lobby." Tours today can be arranged by contacting the Post Office at 715-539-3287.

The building's cornerstone declares the building's construction start date to be 1915. A handful of additional photos of the building, which is listed on the National Register of Historic Places (NRHP), can be found here. The building's NRHP registration form notes: "The postal lobby is unique among the Wisconsin post offices surveyed; it has a cofferred ceiling with an octagonal skylight. The design of the skylight is enriched through the addition of geometric tracery. Modern lighting fixtures have been installed in such a way as to minimize the Impact on the cofferring. The lobby retains other original features, including its original tile floor, marble wainscot, and marble door surrounds. The walls and ceiling are of plaster."

I, for one, have never seen a century-old post office with an octagonal skylight. I also can't recommend the two-minute video story at WJFW highly enough. Please go watch!

The building's National Register of Historic Places (NRHP) form provides more details about Post Office history in the town: "The Merrill Post Office was built in 1915 to the designs of the Office of Supervising Architect. It was the first federally owned post office in Merrill. Prior to its construction, the post office was housed at various locations. The first post office hi Merrill was located in the Jenny Hotel, owned by Cyrus Stowbridge, the first Postmaster. Prior to the construction of the current building, the post office rented space in the Masonic Temple."

You can get a physical souvenir of the Merrill post office building's 100th anniversary: a Postmaster-autographed postal card with limited-edition pictorial cancellation applied on the day of the event. Some copies of the item are available for $10 from the Merrill Historical Society. Here's part of the item in a scanned example:

The Merrill Historical Society continues to commemorate the occasion, with an exhibit that opened May 13:


A new exhibit featuring an overview of the U.S. Postal Service, including some history on railroad postal cars, opened May 1st at the Merrill History & Culture Center, 100 E. Third Street. According to exhibit chairperson Pat Burg, the exhibit also tells the story of some of Merrill's early Letter Carriers and Post Offices. A small model train layout in the lower level will showcase the interesting way that railroads came to be part of the mail delivery system. The Society plans to create a Merrill postal time capsule to be opened 50 years from now. For further information on the dates and times for the exhibit, or to loan items for this exhibit, please contact Merrill Historical Society at 715-536-5652, or see the website at www.merrillhistory.org.

Four years ago I reported on the sale and redevelopment of several historic post office buildings in Fairfield County, Connecticut, including the 1935-6 building in the wealthy coastal town of Westport. On the way to Rhode Island last weekend I decided to check in on the Stamford, Westport, and Fairfield former P.O.s to see what's changed. I was particularly intrigued to re-visit Westport after seeing this interesting Google Street View image taken last October. A restaurant had replaced the post office here, and that's not a restaurant!

Post 154, a high-end restaurant whose name reflects the building's address at 154 Post Road East, opened at the former post office site in August 2013 after an investment group paid $2.35 million for the property in 2011. The restaurant faced a glut of culinary competition and closed after two and a half years, despite what were termed tasteful renovations (including the addition of a "serene" patio) and generally positive reviews, such as this one in The New York Times. Westport Now reported soon after that developers had come up with a brilliant new idea to turn the closed restaurant into... you guessed it, a new high-end restaurant!

The former post office's new tenant is Design Within Reach (DWR), a modern furniture store. Long-time readers know I'm generally not a fan of the sale and conversion of public buildings into what are effectively retail enclaves for the wealthy. What I will say is that in this instance the re-purposing of the old Westport post office results a space more open and inviting than any other renovation I've seen to date, and I'm very grateful to the staff for letting me poke around and admire the new life that DWR has breathed into the building.

Here's a look at the front of the building now: 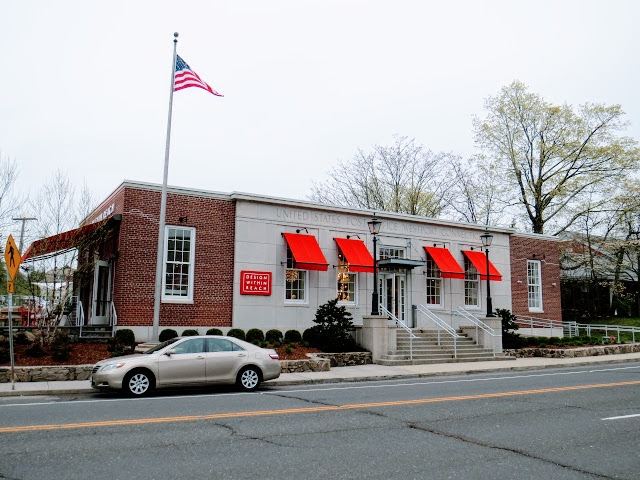 Allow me to present some photos. First is taken from the main entrance, where your eye is immediately captured by a nearly 100-light installation called Light Cloud. In the background you can see the 30-foot-long color spectrum Swatch Wall. Light Cloud leads you down the staircase from the center of the main floor, where postal counters used to be, to the showroom's lower level. The second image was taken looking up from the staircase. 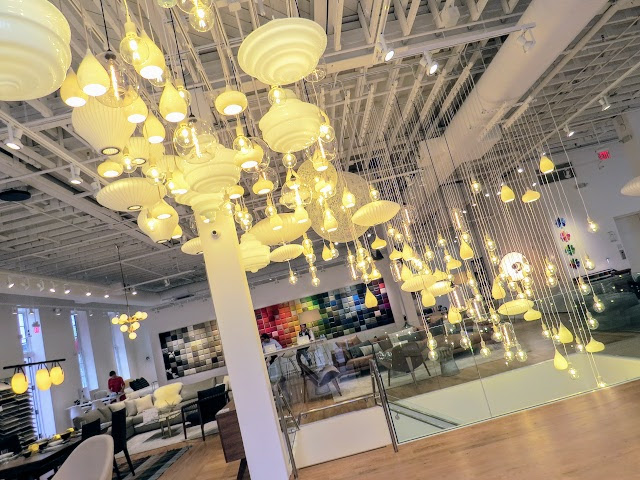 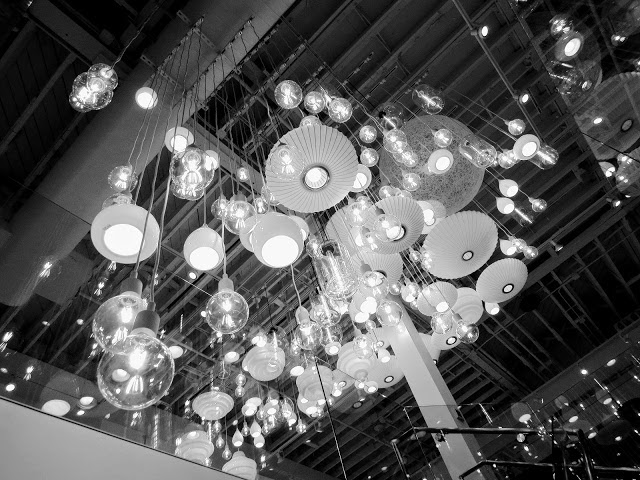 Downstairs, as upstairs, features an unadorned ceiling with exposed beams and pipes painted white. As such the space reminds you of the building's roots; but they don't detract from the space's modern feel. Both floors are bathed in light from a variety of fixtures. Each corner feels lively, with each room vignette coming across as intimate yet vibrant. 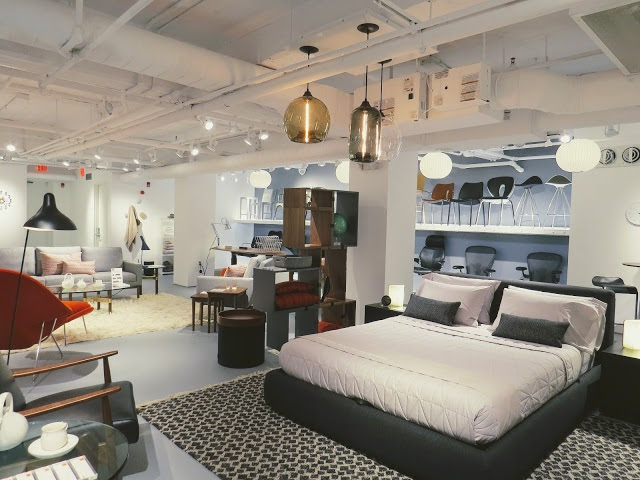 Many of the fixtures enable incredible textures by way of the interplay between light and shadow. To wit: these clocks and this room vignette. 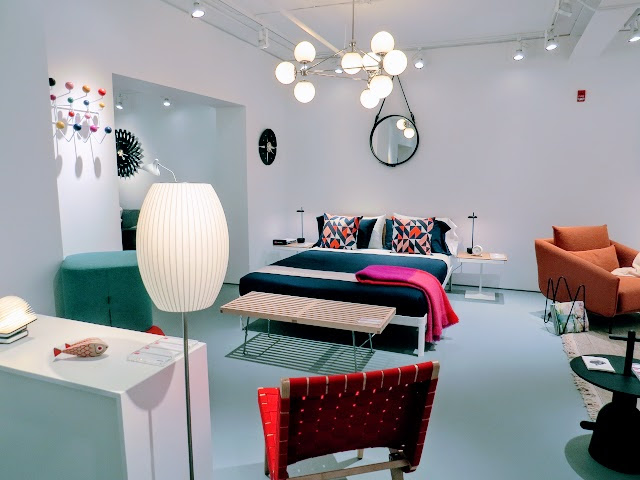 Here is the deck space originally created for Post 154. 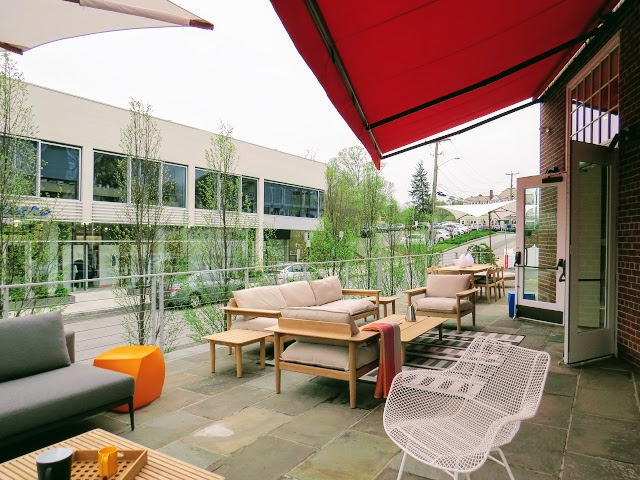 Look closely, such as along the rear wall behind the building, and you can see some vestiges of the facility's original function. Here, loading dock numbers with doors since walled in. 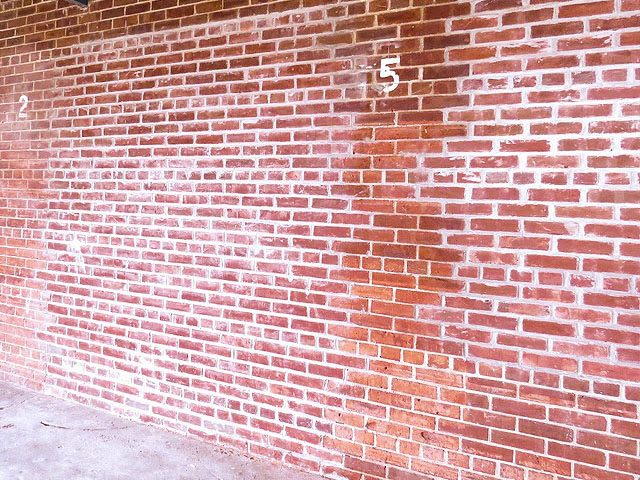 Here's another look at the primary floor space. 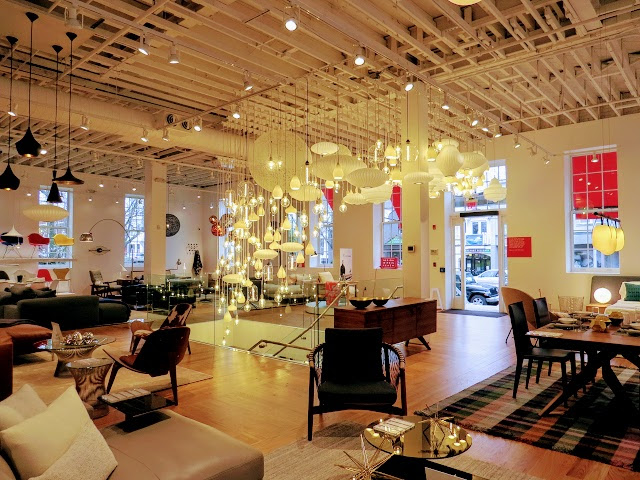 All in all, at least in my view, Design Within Reach creates a compelling re-purposing of the post office building through an innovative rethinking of the building's interior space.