If you're looking to get away from the hustle of Charleston, Edisto Island is a photogenic and relaxed community within an hour of the city. It's not commercialized and not heavily trafficked as is Hilton Head Island. I visited both areas in April during a brief jaunt to the South. Of course my mission on Edisto was to photograph the post office, which lies 17 miles down from its nearest, and smaller, (and not to mention highly photogenic) neighbor in Adams Run. The present post office building, a mid-'80s model, is a rather standard structure. The former post office site, however, which I first noticed as a seemingly extraneous dot on the Google Maps app on my phone, is definitely worth a look. It's now the Old Post Office Restaurant, and they've got the old postal window to prove it! But first, a photo of the location. 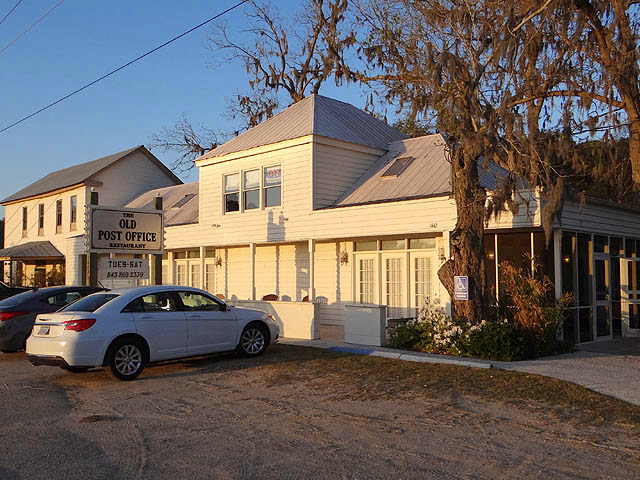 Here's a general map of the area. 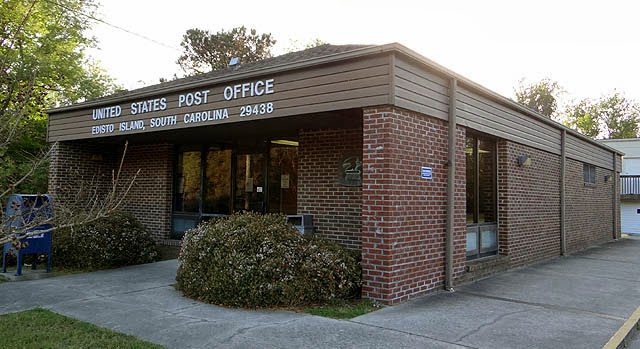 Edisto Island has had a post office since 1832, though USPS's Postmaster Finder does not currently maintain Postmaster information for the office prior to 1950. Edisto Beach, a community about seven miles southwest of the Old Post Office, maintained a short-lived post office that was in operation between 1950 and 1953. (The current Edisto Island post office lies three miles closer to the latter.)

The old Edisto post office [and general store and gas station] was a central meeting point for locals and visitors alike. But the site's significance dates to the late 18th century. According to a story in a Charleston historical magazine, the site "encompasses the restored Bailey House ca. 1799, and Bailey's Store, a pre-war relic from Edingsville Beach, once a thriving, antebellum seaside resort and one of the last, if not the last, surviving commercial building on Edisto Island." [Edingsville Beach lies along the Atlantic, about three miles south of the Old Post Office.]

The present Old Post Office Restaurant is the second such institution to reside at this location. The first O.P.O. Restaurant opened in 1988, three years after the post office moved out. It closed in 2006, but not after having received press coverage in such publications as USA Today and Gourmet Magazine.

The husband-and-wife team of Adam and Toniann Morris picked up the gauntlet soon after the original O.P.O. Restaurant closed. They devoted extensive effort into renovating the property and restaurant facilities -- both while teaching full-time. The present Old Post Office Restaurant opened April 2009, and part of what makes this a fun stop for the postal buff are the little details the couple has worked in to maintain the restaurant's connection to its past. To wit:

The mailbox is beautifully decorated with a stamp and giant Edisto Island postmark. 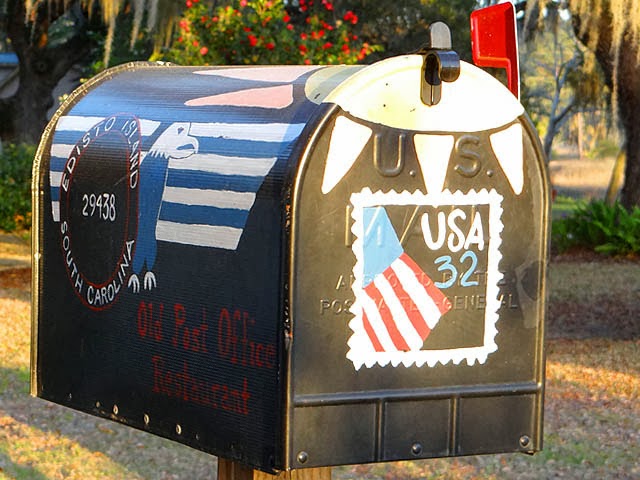 The old postal window, just inside the entrance. 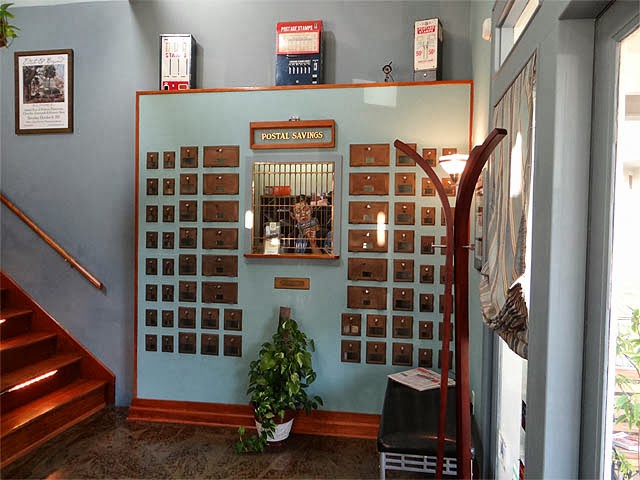 The Morrises are impeccably friendly. The diners I witnessed while I was in town appeared to be enjoying their meals. With more post office buildings being either sold or shuttered, one can only hope that more owners will recognize and maintain the heritage of these sites, much as the Morrises have.

Other points of interest nearby include the With These Hands Gallery, which is right next door; and the Edisto Island Serpentarium, a few hundred feet down the road.
Posted by Evan K. at 4:22 PM 1 comment: