New York's First Subway Station
(and the Post Office That Shaped It!)

Ride a New York subway to the end of the line and it will eventually start heading in the other direction on the track from whence it came. On most lines this turnaround is uneventful: you sit around for several minutes and off the train goes in the other direction. But if, say, you fall asleep on the 6 train and don't get off at the last stop near the southern tip of Manhattan (at the Brooklyn Bridge – City Hall Station), you'll soon find yourself winding through the underground equivalent of a video game Easter egg as you physically loop around to head back north. Here you'll catch a glimpse of New York's first (though no longer utilized) subway station. You'll find that the station is gorgeous and utterly unique: 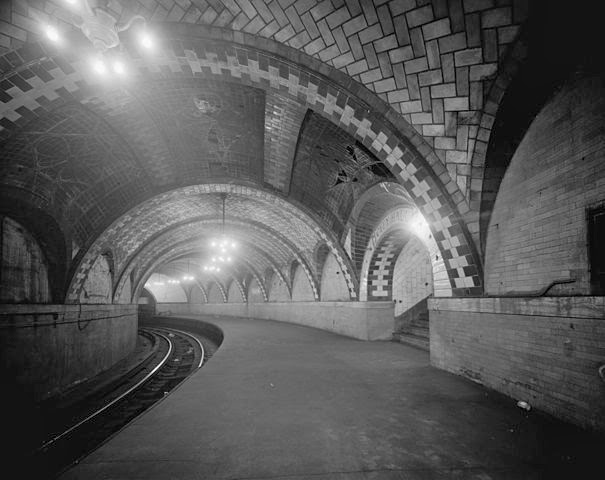 The platform forms part of the turnaround loop that is still used by the 6 train today. Located beneath City Hall Park, the original City Hall subway station was the southern terminus of New York's first subway and was inaugurated October 27, 1904. (New York had consolidated as as the five-borough city we know in 1898, drawing vastly more land under a single government; subways were seen as instrumental for ensuring the city's place among the world's great metropolises.) The original subway route took passengers through Midtown, Times Square, and up to the mid-140s past the Upper West Side. You can read more about the stunning station here or here.

So why publish this to a blog about post offices? Consider the unique shape of the subway station: it's an arc, and as it turns out there was a reason for this: given the space New York's original subway cars would need to turn around, there was simply no room to create a flat platform at this location. If you look at the landscape today you'd see no reason why you wouldn't be able to take as much land as you need to turn a train around underground—most of City Hall Park is open parkland. But this was not always true. During the early 1900s there was actually a huge building with a deep, solid foundation on this now-open site: the old Main Post Office for New York. Have a look, and note how the subway just avoids the [foundation of the] post office. In other words, the crescent shape of the subway station was necessary to occupy the space in question. (For the record, north is roughly rightward in this diagram.) 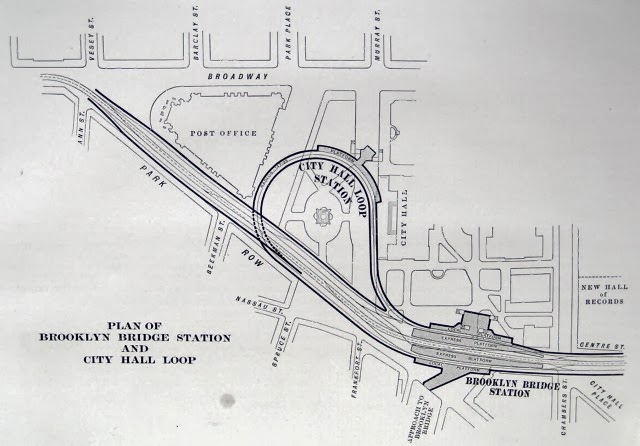 I've superimposed the above schematic onto a Google Maps map below. The Brooklyn Bridge extends from the lower-right corner of the map. There is no trace of the old post office footprint in what is now an open grass area today.

The post office building in question, sometimes referred to during its existence as "Mullett's Monstrosity" after the architect who designed it, was constructed over the course of a decade (1869 to 1880). Designed to enable the processing of more than 100 tons of mail per day, the five-story building also housed federal courts. The building was constructed at what was then $8.5 million. It was the predecessor to the world-famous James A. Farley Post Office Building, which became (and continues to serve as) the main post office for New York. The "Monstrosity," for its part, was completed not a moment too soon; from 1844 to 1875 New York's post office had been housed in a church building constructed in 1731(!).

Here's a photo of the post office building from 1905 (source: shorpy.com, at which you could buy a full-size print if you so desire): 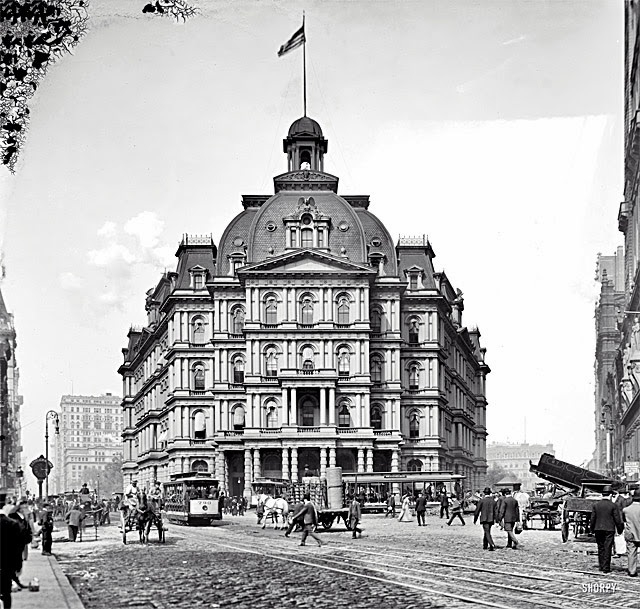 The building extended underground, with a "basement for sorting mail and a sub-basement for machinery" (Wikipedia). And thus it came to pass that the needs of the city's new subway would defer to footprint of the massive federal post office.

Daytonian in Manhattan has a fantastic write-up of the now-demolished federal building, featuring many images of the structure.
Posted by Evan K. at 2:32 PM No comments: