Browsing the Post Mark Collectors Club (PMCC)'s vast trove of post office photos can sometimes lead to some interesting discoveries. This realization came after reviewing a recently uploaded photograph contributed by GP friend Steve Bahnsen, who recently explored dozens of post offices in Florida and who noted that one of my photos from the region was mislabeled. Back in 2009 I took I-95 from New York City to south Florida, stopping at two post offices in Titusville along the way. Why Titusville? Memories of Space Camp, of course! Titusville is located right by Cape Canaveral on Florida's eastern shore. Well clearly it's postmark time! But disappointingly, three of Titusville's post offices have been closed in recent years.

A post office in the community had been established in 1859 by the name of Sand Point. The name stuck until the community was redesignated Titusville, although Titusville's website informs us that the town could have been differently renamed:


Today's "Titusville" might have been known as "Riceville" except for the craftiness of Col. Titus who won a challenge match of dominoes against Capt. Clark Rice to determine which player got to rename the town. Thus the outcome of a domino game resulted in Sand Point becoming Titusville, Florida in 1873.

What struck me about the PMCC's collection of post offices in Titusville is that it shows us just how much USPS's footprint can evolve (or disappear) from a community over time. In this case the PMCC has images of four post offices in Titusville over the past 20 years, though now only one is still in existence. The main post office remains but the three stations, including the two I visited in 2009, have since closed. And that's a shame for a growing community of 44,000 that encompasses 30 square miles and stretches more than 10 miles from north to south. Presented are the PMCC's photos as well as more recent Google Street Views of two of the discontinued sites. And, as always, here's a map! 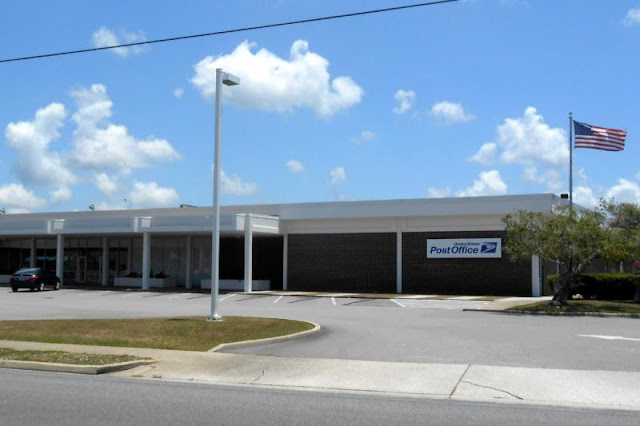 Located at 2503 S Washington Ave., Titusville's Main Post Office is located right along the Indian River, with its parking lot bordering the body of water. 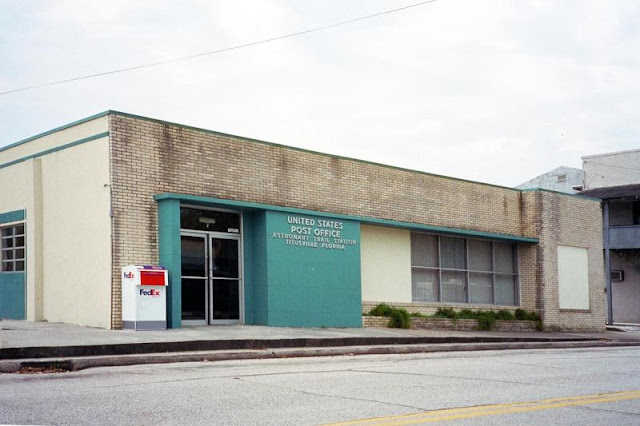 Address: 5 Main St. Titusville's Astronaut Trail Station is located in the heart of the original downtown Titusville, also rather near the Indian River (and two miles north of the Main Post Office). Google Street View confirms that this post office closed by 2011. Imagery shows the former post office operating as a real estate office. A banner on the front of the building was advertising deals on foreclosed properties.

(FYI: Google Street View imagery for this site dates back to 2007, if someone would be interested in deciphering some of the project's very grainy early images.) 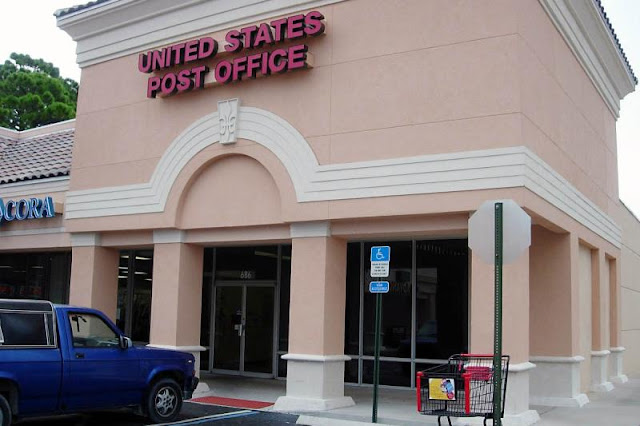 Address: 686 Cheney Hwy. Located a 3.1-mile drive from the Main Post Office, Google shows this pink-façade building in a shopping plaza vacant in May 2015. 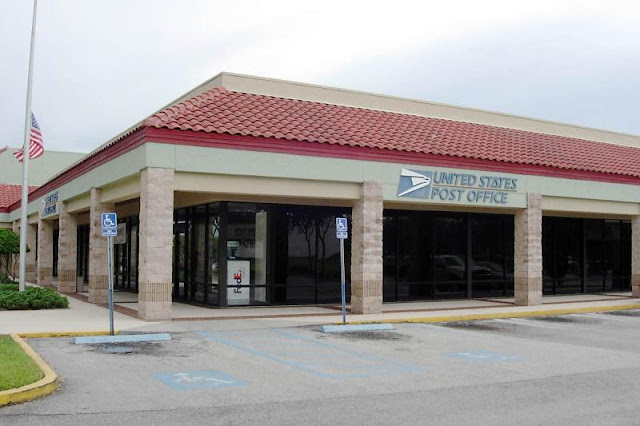 Address: 1538 Harrison St. Located in another shopping plaza, Street View shows this post office operational in 2011. This was the closest station to the Main Post Office (a distance of 1.2 miles).
Posted by Evan K. at 4:51 PM