Dubuque holds a special place in history: It is, per its website, "Iowa's oldest city and is among the oldest settlements west of the Mississippi River. The first permanent settler to the area was French-Canadian fur trader Julien Dubuque." The region contained rich deposits of lead, and Mr. Dubuque worked with the native Mesquakie to mine it until the time of his death in 1810. Dubuque is also home of what was the first post office in Iowa! Per The Annals of Iowa: "The postal system in Iowa dates from 1833 the first postoffice being established in Dubuque (then called Dubuque's Mines) on May 27th." The City of Dubuque was chartered in 1837 and has had a post office by that name since that time (replacing the Dubuque's Mines P.O.). By 1837 two dozen post offices had been established in the territory, and by the time of Iowa's 1846 statehood there were dozens throughout the territory.

A great early history of the Dubuque post office, particularly during its early years, can be found at Encyclopedia Dubuque!

First, let's have a look at the former Custom House and Post Office building. Long gone, it was located at W 9th Street and Locust Streets. This image was taken ca. 1902: 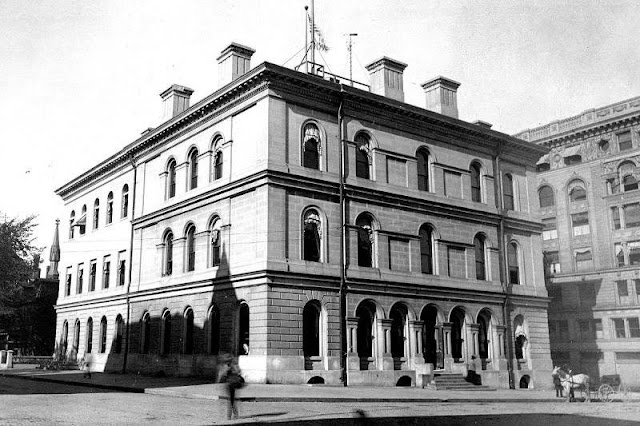 Here is the current post office as of last year: 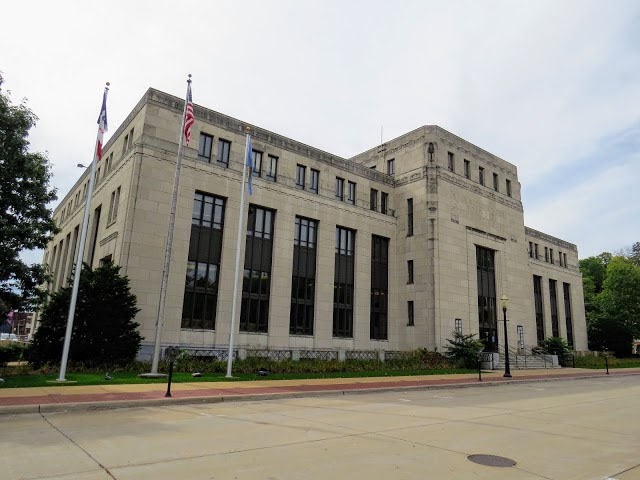 
As Dubuque expanded during the 1920s, the post office was not large enough to handle the increasing volume of mail. Rather than enlarge the existing building, city officials decided to construct a new post office. Congressman Thomas J. B. Robinson led the effort to secure a more appropriate postal facility. Officials determined that the new building would function as both a post office and courthouse, and the building continues to serve these purposes today [author's note: I find no direct evidence that the courtroom is still in use by the Northern District of Iowa; the building does, however, serve other Federal functions].

The building was constructed with funding from the 1926 Public Buildings Act, in which Congress appropriated substantial resources for Federal buildings throughout the United States. Dubuque received approximately $650,000 for site acquisition and construction costs. Renowned city planner John Nolen intended for the building to be part of his civic design, "Administrative Center at Washington Park," which he developed in 1931. City officials hoped to construct a city hall, courthouse, and park adjacent to the post office, but these plans were never realized.

The Courthouse was designed by the Office of the Supervising Architect under James A. Wetmore, who received input from Iowa architects. Among the local designers was the office of Proudfoot, Rawson, Souers & Thomas, a highly respected Des Moines firm. This venerable firm (including earlier variations of the founding office) had a long of history of designing high-profile public buildings in Iowa, including the Polk County Courthouse in Des Moines and buildings for Iowa State University and the University of Iowa. Although little is known about the Dubuque architect involved in the project, Herbert Kennison, he likely served as an onsite consultant and provided the valued contribution of a designer who was also a local resident.

The building's cornerstone was laid in 1932, and a dedication ceremony was held the following year. The building was occupied in early 1934. In 1985, it was listed in the National Register of Historic Places as a contributing resource within the Cathedral Historic District, which encompasses historically significant residences and public buildings. 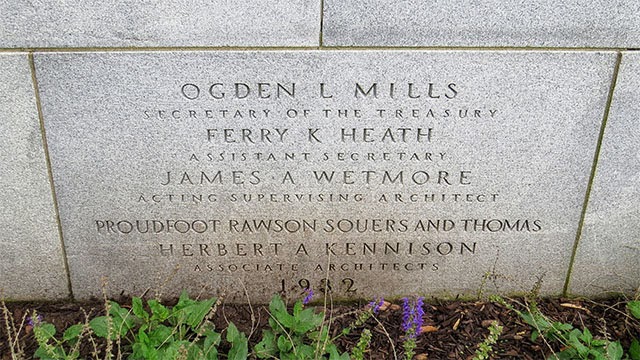 Beyond the fact that the structure was built by Chiabi & Garriup Construction Co., Wikipedia actually seems a more reliable source than the National Register of Historic Places nomination form that includes this federal building, which wrongfully states that the building was built in 1930; was built by the Works Progress Administration (WPA)—which wasn't around at the time of its construction; and featured artwork by just one artist. A URL on the GSA cited by Wikipedia is no longer valid, so let's continue our discussion of the two Treasury Section (New Deal) murals with the Wiki text!

The interior features ... important murals in the lobby vestibule. The murals were funded with $2,000 of the original money allotted for construction of the building. Although a competition to select an artist was held, officials intended to select Grant Wood, the famous Iowa painter of "American Gothic," to complete the murals. When Wood did not enter the competition, William E. L. Bunn was selected. The selection was subsequently overturned in favor of a painter named Bertrand Adams. As a compromise, both Bunn and Adams, who each studied and worked with Wood and were friends from the University of Iowa, were allowed to paint murals. Adams painted "Early Settlers of Dubuque" in 1936 and 1937. The painting depicts several symbols of the city's pioneering days, such as the Julien Dubuque Monument and the Mesquakie Native American village. Adams also represented impending industrialization by painting the Dubuque Shot Tower and a bridge. Bunn painted "Early Mississippi Packet 'Dubuque III'" (also referred to as "Early Mississippi Steamboats") at the same time. His mural illustrates life in Dubuque in 1870, when steamboats were a primary method of transportation in the Midwest. The two murals show a harmony of scale and color use. 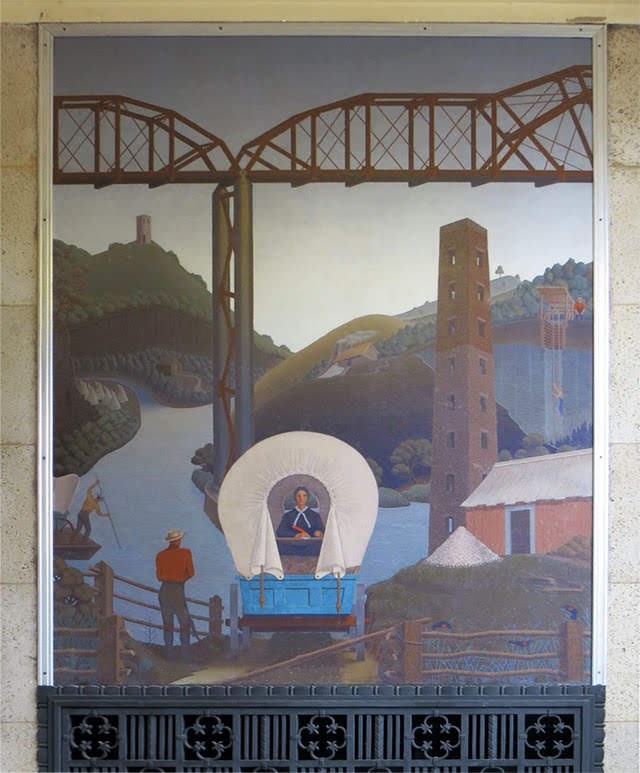 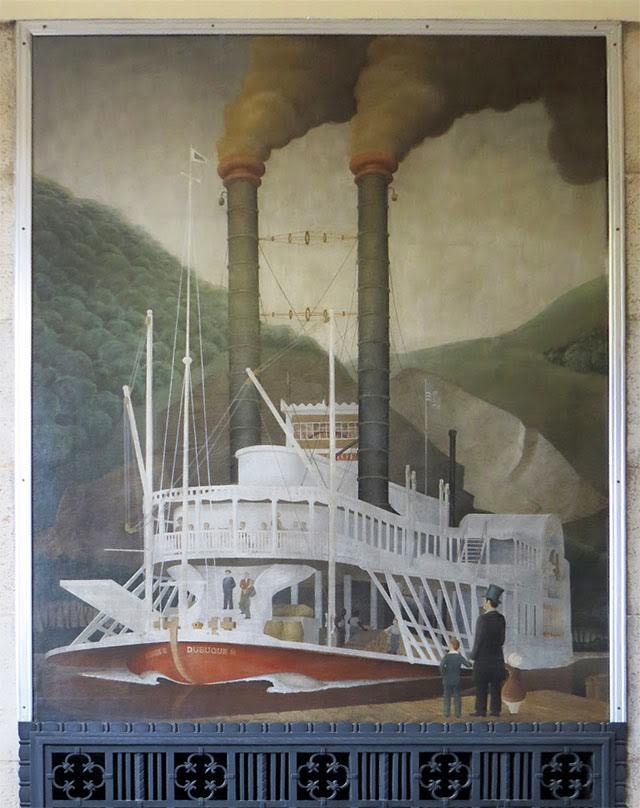 I am totally digging those radiator grilles at the bottom; aren't you?

Postlandia bonus: Compare the final artwork with an initial "cartoon" by the artist! (Note: The perspective on the modern image is a bit warped, and thus not exactly to vertical scale.) 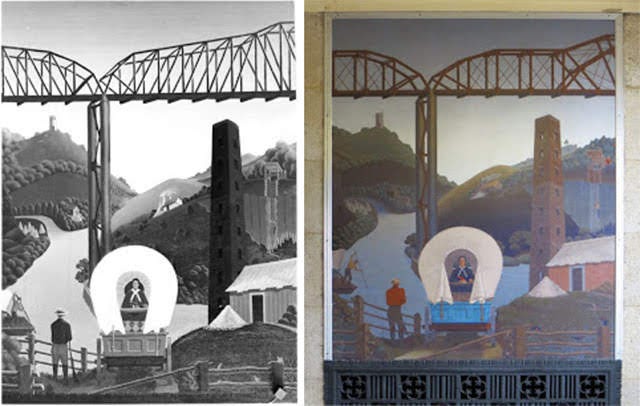 My favorite part of the vestibule is the plaque describing the murals; specifically: 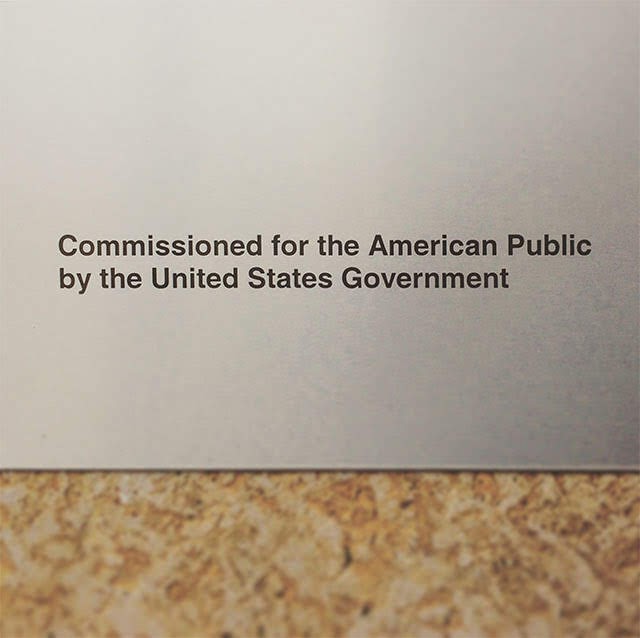