Last week a collecting friend and I visited 22 offices in northern Massachusetts and southern Vermont. Deep in rural Massachusetts lie three beautiful small post offices of northern Franklin County, each of which occupies a room in a corner of its respective town hall.

Heath is a CPO of Charlemont, MA, open from 9:30 to 1:30. It possesses a new four-bar and is literally the next door from the Heath police department. Sawyer Hall also contains the Heath public library. Mail is delivered to the building in a Jeep for the town of 800. There is no signage indicating the location of the post office outside the building; only a mail dropbox.

Rowe is an independent post office and features a large four-bar. Its OIC writes a monthly column for the wonderful monthly newsletter for the town of 380. (It even includes the birthdates of all its residents!) In the one I picked up, the OIC thanked residents for shoveling paths to their mailboxes after the big Christmas storm.

Monroe Bridge is a CPO of Rowe and is open two hours a day (three on Saturdays!). It, too, possesses a four-bar -- slightly worn -- and any outgoing packages need to be "wallpapered" since no meter is available. The town now numbers fewer than 100 people, and it's highly likely that the CPO will be permanently discontinued once the current contractor retires. Once again, there was no indicative signage for the post office outside the building. 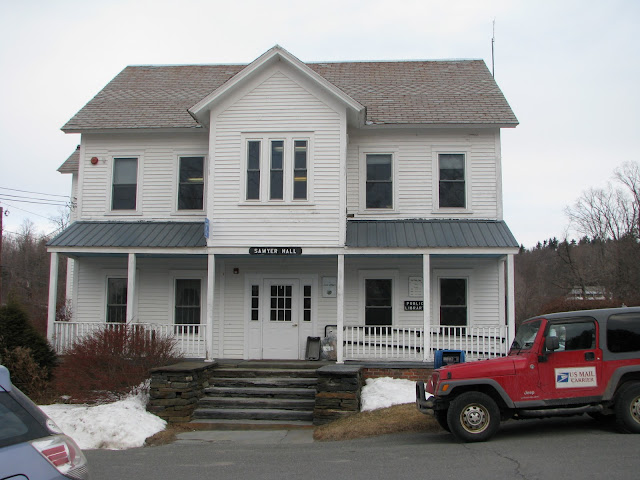