While exploring the post offices of the Las Vegas metropolitan area, I set out to document a few desert POs in southern Nevada and along the edge of California. Look no further than Pahrump, NV as evidence that postal adventures can be realized in nearly any setting, no matter how mundane. So what can one say about this locale in the southern tip of Nye County? ... It has legalized prostitution but no ordinances governing zoning or land use. Play around with this movable satellite view and see if you can figure out what in the sun's blazes is going on.

Pahrump now occupies 364 square miles, housing 36,400 residents. Cheyenne, Wyoming has a population density 24 times that of Pahrump. Consider that the town possessed only 7,400 residents just 20 years ago. Now, Pahrump is a massive sprawling grid in the middle of the desert, half of which was built out to accommodate development that has never come to fruition. The vastness of the town and the possibility of future population infill is what enables three post offices to operate.

Here's a satellite image of a massive sub-development that wasn't. The roads are all laid out, yet there's nothing there. It's right by a private airport just east of the town's main thoroughfare. 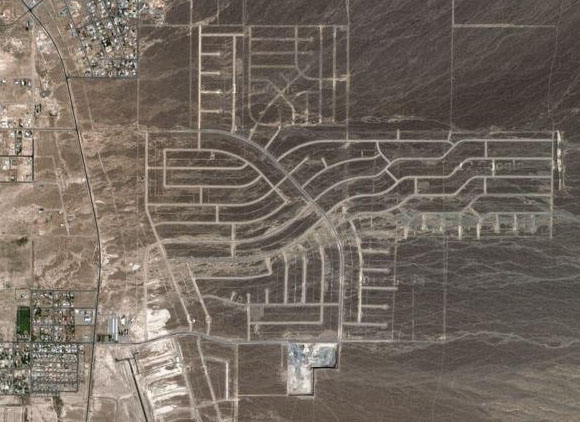 So, let's get a geographic fix on the postal landscape!

Pahrump possesses a main post office and two stations: one north -- Simkins, and one south -- Homestead. I've not been able to find history on the past of the Pahrump post office, though one website shows a cover cancelled there in 1937. Simkins and Homestead were established relatively recently: Simkins in 2001, and Homestead in 1994.

Simkins Station is across the street from a Shell station to the north, a house to the east, and is kitty corner from a large vacant block. Beyond its bland setting, the office is surrounded by barbed wire fencing. Considering that the lobby and parking lot are always open, that seems like bit of a moot defense mechanism. The location houses 580 PO Boxes and is staffed by one clerk from 9:00am-12:30pm and 1:30pm-4:00pm Monday through Friday. The Pahrump Valley Times reported that Simkins Station was targeted for closure last summer, but the office was never a part of the 3,650-office RAOI discontinuance studies. 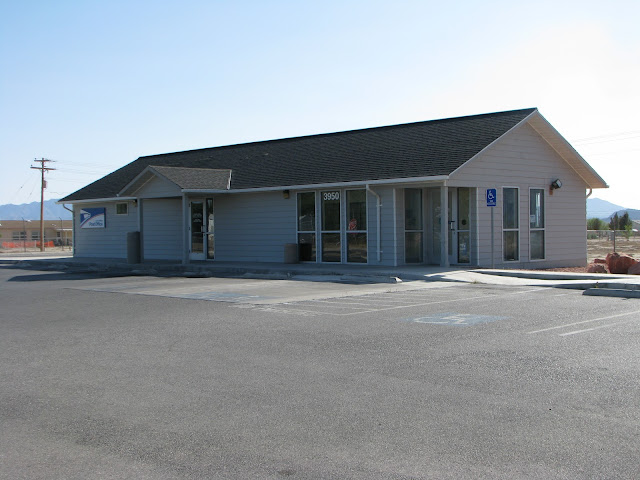 Here's the view from the entrance: 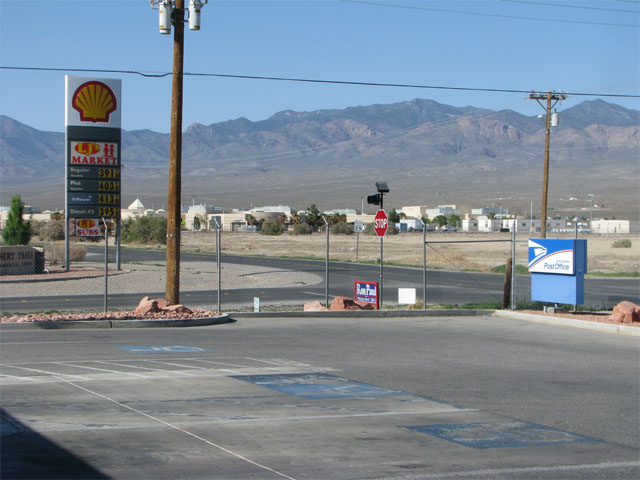 Pahrump's Main Post Office, in current iteration, has been housed at 2300 Postal Drive since 1995. The lobby is open 24/7 and possesses an APC. 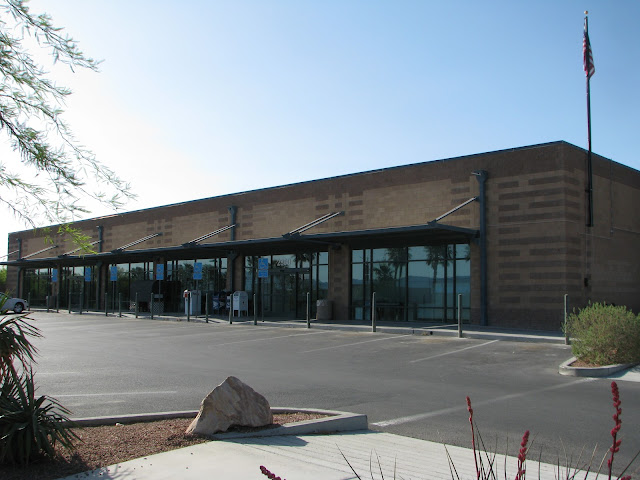 The front of the offices has, in addition to a regular blue collection box, an Express Mail box, and a FedEx bin, a white collection box for metered mail only. That is something I had never seen before... obviously I had to grab a photo of it. 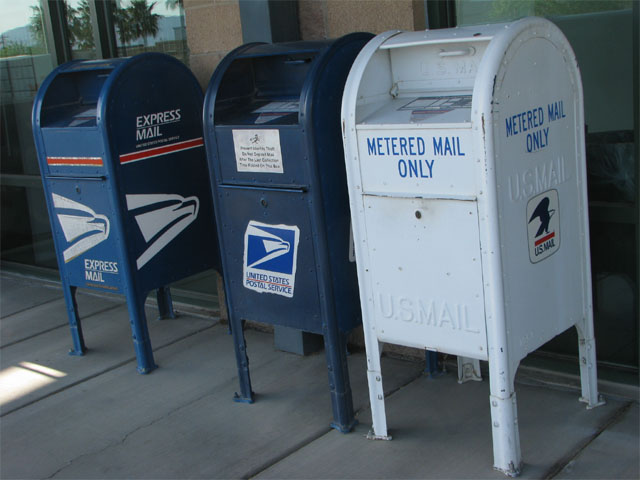 Pahrump's Homestead Station is in a setting similar to Simkins's. It's in a neighborhood that is half residential yet half devoid of development, on a drag punctuated by an occasional little shop. In fact, the site that presently houses the post office formerly housed a brothel! But the building is new and nice; the siding blends with the palate of the landscape. 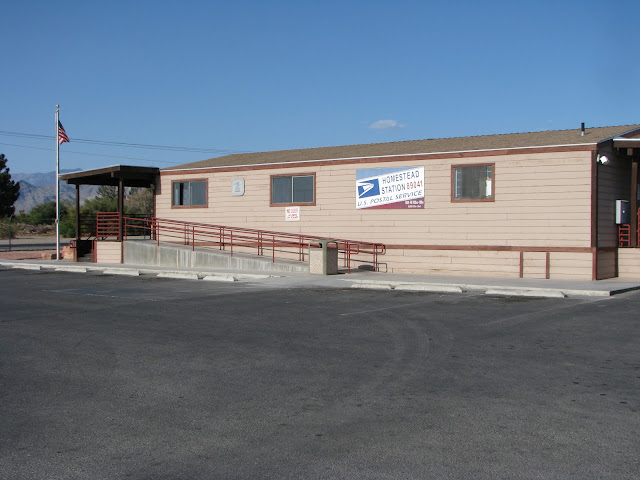 The highlight of the building is the signage, which is unique to the location and hand-stenciled. It even features the hours of operation! Wouldn't want to have to change those. Regardless, this is what classifies this entry as a Nice Touch. 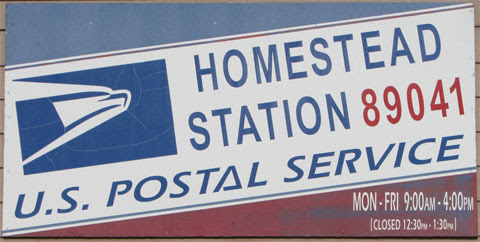 As suggested by the lunch-hour, this is a one-person retail-only operation. Like Simkins it is surrounded by a barbed-wire fence though the parking lot and lobby / PO Boxes are always available for customer access. Here's a view from the edge of the lot: 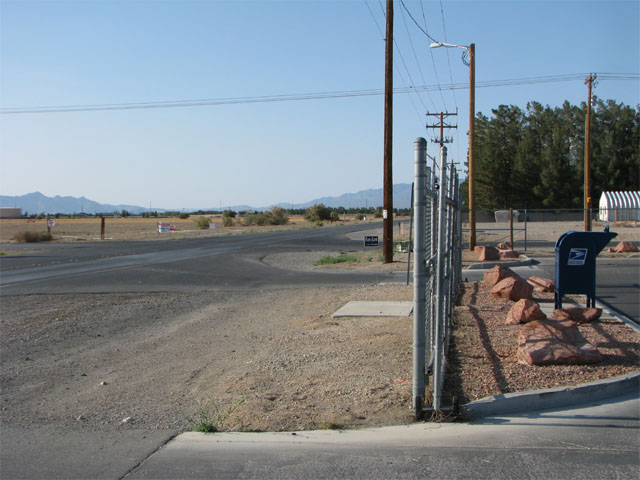 Hope you enjoyed your postal tour of an interesting little corner of the world!
Posted by Evan K. at 8:46 PM