A Positive Impact of POStPlan?

Editor's notes: In discussing the nationwide implementation of POStPlan we consider frequently the reduction of retail hours at rural post offices and the dismissal of Postmasters. Often overlooked is the need for local residents who have no rural delivery to be able to pick up their mail beyond the hours of a post office's new reduced hours of, say, 8—10 A.M. Here's how that issue is being addressed in many parts of the Midwest and in particular at one office affected by POStPlan in eastern Iowa. Mr. Bahnsen is encouraging and working with various postal officials around the country to improve access to Post Office Box lobbies, whether or not those post offices are impacted by POStPlan and its attendant reduced window hours. (This post does not necessarily endorse the latter policy.)

POStPlan is sweeping rural America. Perhaps you have heard of it, or even had this affect your community's post office. It was designed to eliminate Postmaster jobs, and while small post offices will remain open, their window hours will be reduced to 6, 4, or even 2 hours a day.

Postal Service Headquarters in Washington, D.C. selected which offices would be impacted by POStPlan, and gave guidance to its local Districts regarding the logistics of its implementation.

POStPlan mandates that residents' ability to access their Post Office Boxes [in the post office lobby] not be reduced upon the plan's implementation. If a lobby was open all the time, access would not change. If the boxes were available from, say, 7:00 A.M. to 5:00 P.M., or even if the boxes were only accessible during the morning, lobby access hours would not be reduced even as retail hours were impacted. Nowhere within POStPlan were there instructions that box lobby hours could not be expanded, only that they could not be reduced. In this way POStPlan has afforded the Postal Service with the opportunity to re-evaluate and in many cases improve P.O. Box mail access. 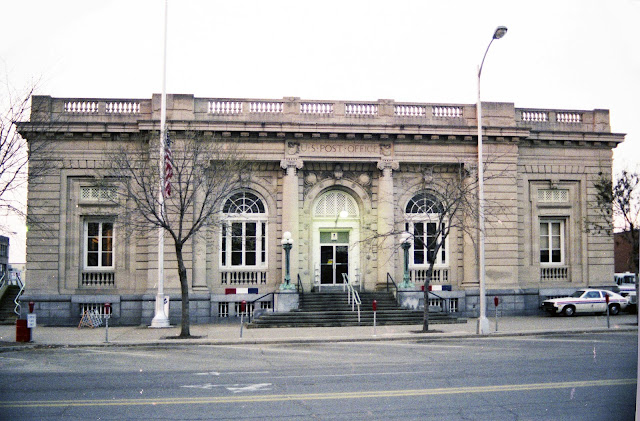 My own postal history dates to about 1965 when I discovered the glorious 1902 post office in my hometown of Clinton, Iowa. I was mesmerized by the marble walls and floors in this building where people came to buy stamps and mail things. The whirr of the cancelling machine in the late afternoon and evenings was music to my ears, as was the idea that any person could come into this building at any time to get their P.O. Box mail. The concept that everyone should be able to get their mail at any time has stayed with me for 50 years.

For decades Iowa has housed hundreds of post offices whose lobbies are accessible at all hours. Plenty of other offices maintain lobbies that are accessible into the evening courtesy of automated time locks, many of which were installed during the 1980s.

POStPlan has provided the impetus to turn off the time locks at many offices and just leave the lobby open all the time. [The postal Districts governing] Minnesota, northwestern Wisconsin, Missouri, southern Illinois, and Indiana are among those that have joined Iowa['s] in simply leaving post offices' lobbies open once POStPlan impacts them.

The expanded lobby hours have been a boon to many communities. Residents need no longer race home from work just to pick up their mail before the post office is locked for the evening. Now they can get their mail after dinner, on Saturday afternoons, or even Sundays and holidays — any time that suits them. Only minor security modifications have been required at many offices for this plan to succeed.

A novel idea was implemented in Goose Lake in eastern Iowa, a town of 250 people (and a large school complex) about 15 miles from the Mississippi River. Their post office building was hastily constructed 35 years ago [in 1978] with the P.O. Boxes and window counter all occupying the same room. The entire building needed to be locked while the Postmaster took lunch [before window hours were reduced upon the implementation of POStPlan]. A 24-hour lobby here is out of the question.

Here the Postal Service provided and installed four large cluster boxes in front of the post office building, meaning residents can pick up their mail whenever they want to -- for the first time in history in Goose Lake. The equipment also includes eight parcel lockers (another first), which enable most customers to pick up a package that is too large for their mailbox at any time.

[Below: the Goose Lake post office featuring cluster boxes for increased P.O. Box mail access. The boxes were added upon the implementation of POStPlan as the post office lobby could not be left unlocked beyond the newly diminished retail hours.] 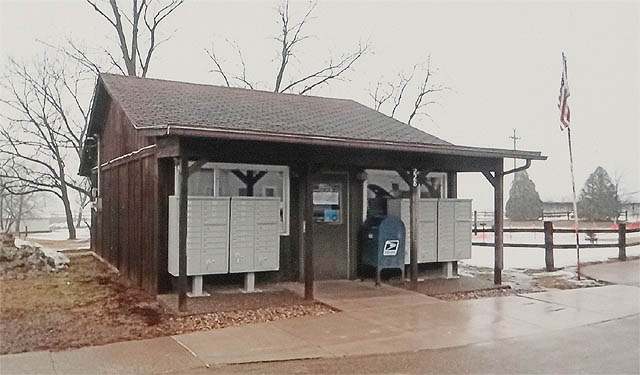 Some residents preferred to keep their Post Office Boxes inside. Those are accessible from 10:00 AM to 2:00 PM during the week as well as for a couple of hours Saturday morning.

The standard blue collection box is emptied each afternoon after 4:00 P.M. by the Highway Contract Route driver and taken to the Quad Cities P&DF [about 45 minutes south].

POStPlan has its downsides, but I firmly believe that in this respect people are being better served now by being able to access their mail every day, even if the retail window is open less.

Note: During my own travels I've observed that post offices in the southern part of the country are much more likely to maintain P.O. Box lobbies that are accessible 24/7. Rare is a 24-hour lobby in the Northeast, even in remote and presumably safe areas in Pennsylvania and New England. In the South 24-hour lobbies are pervasive.
Posted by Evan K. at 3:29 PM