We've all got a mental image of our neighborhood mail collection box, right? It's SpongeBob MailPants, but blue. 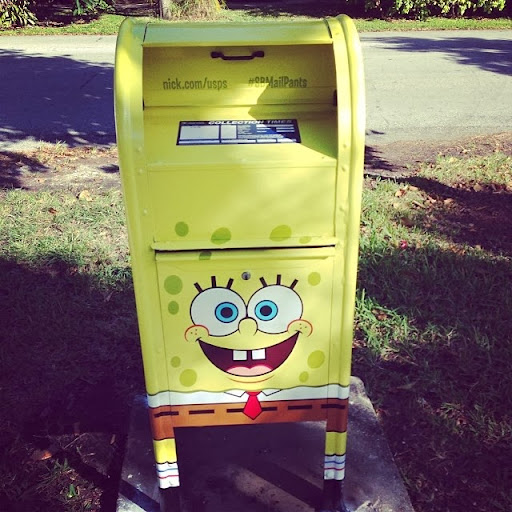 (This was found by a friend outside the Miami Children's Hospital. Here's a story about the temporary program, and here's little USPS YouTube video showing how they were made.)

In the old days, however, collection boxes looked different. They were smaller, they were mounted on poles and walls, and they most certainly were not blue. Some older collection box models remain in circulation; today you'll primarily find them in front of rural post offices and around scattered historic districts. These boxes have been around for decades, are seen by some as relics, and are slowly being phased out by the Postal Service due to the added capacity and wider mouth of 'standard' collection boxes.

I found this pole-mounted box in the town of South Hill in southern Virginia last summer. The Postal Service was looking to remove the box shortly. 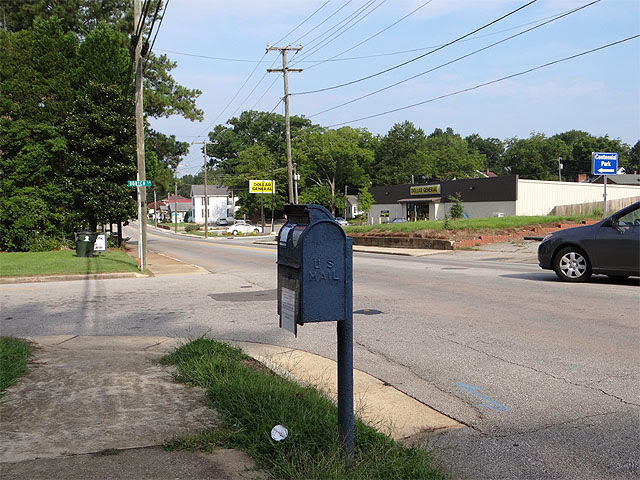 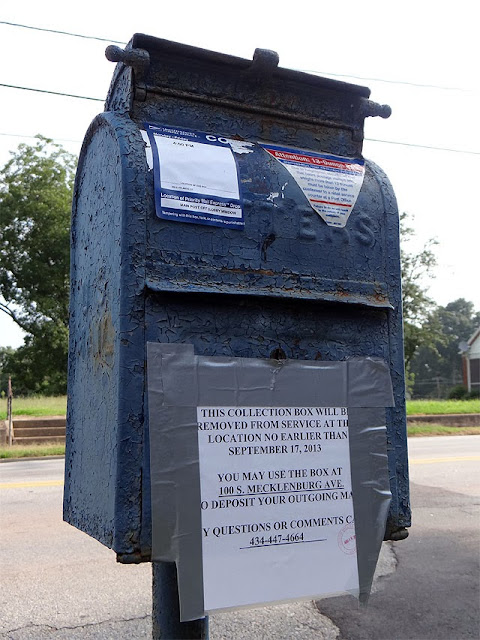 
After the introduction of stamps, people wanted a more convenient place to drop-off their mail than [at] the post office. In the 1850s, the Post Office Department began installing collection mailboxes outside of post offices and on street corners in large cities.

Collection boxes were initially mounted on lampposts. Albert Potts, a Philadelphia iron manufacturer, patented the first of these mailboxes on March 9, 1858 (patent number 19,578).

The website presents a gallery and details regarding ten post boxes of varying models in the Museum's collection. (NOTE: The site doesn't display correctly on some browsers. Furthermore, the site does not include all varieties of old post boxes, including some that you'll see here.) Included with the details are notes regarding collection box colors. To wit, with respect to one 19th-century model:


The boxes were color-coded and were either red or green. Residents considered the red boxes more convenient because mail was picked-up every hour, but the green boxes only had collections four to five times a day and twice on Sundays.

I found this non-standard collection box at a rural Pennsylvania post office in 2012: 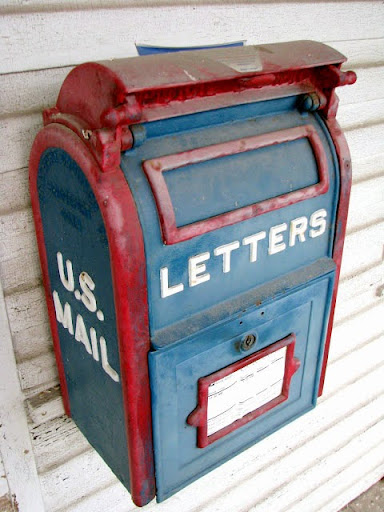 (In the old days you'd be more likely to see a red-blue design like those seen here:) 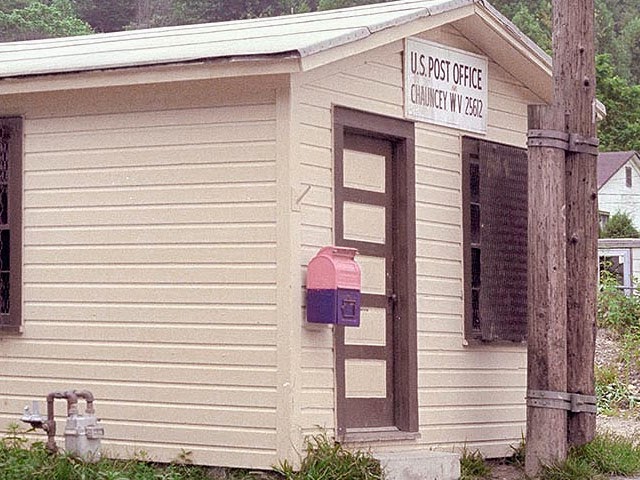 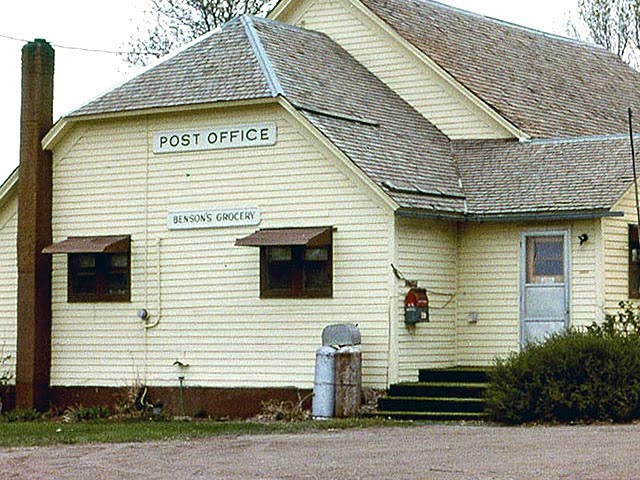 (These, as well as more than 15,000 other photographs, can be found at the PMCC's incredible Post Office Photos site, which I also maintain.)

Some collection boxes take up a life of their own after they're formally retired from service. For example, this Doremus lamppost mailbox now resides at a rural post office in New England, serving as a depository for letters to Santa: 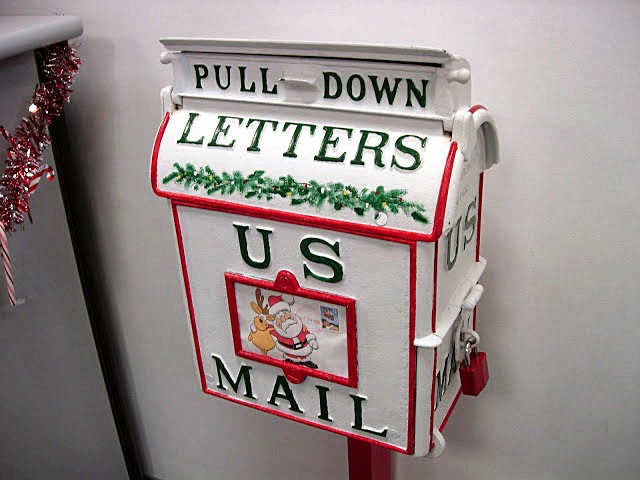 Some readers might remember this box, from the Silver Dollar City CPO in Missouri: 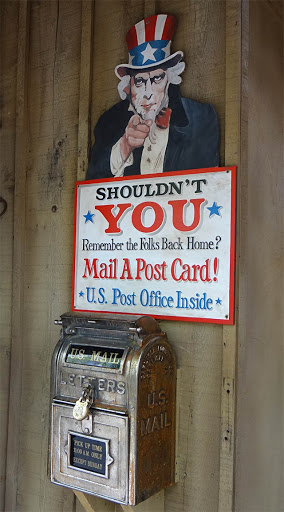 The solid blue collection box theme we know today became the norm in 1971, when the U.S. Postal Service as we know it was established as a result of the Postal Reorganization Act. And despite my highlighting interesting exceptions here, the vast majority of old-style post boxes in use today are [Owens-style mailboxes that are], indeed, also solid blue.

If you're interested in locating such old-style post boxes near you, USPS has hidden a little hint for you within its submissions to the Postal Regulatory Commission's for its 2013 [USPS] Annual Compliance Review. Since many databases that ordinarily could not be accessed except through FOIA requests are submitted as part of the public record, you can find all sorts of interesting data about our postal network. Two massive Excel files provide the locations of all mail collection points (such as blue boxes) and their attendant collection times across the United States. They can be found among the files posted here. You can organize and analyze the data as you see fit.

Virtually all the existing post box examples of which I'm aware are categorized in these databases under TYPE "POST" and "WALL." I used filters within Excel to highlight just those collection points for this article.

This list and map includes all collection points from these databases that are of TYPE: "POST" as well as some of TYPE: "WALL." I have removed the vast majority of "WALL" entries because there appears to be no standard definition for this term. Many postal districts apply it loosely toward generic mail slots in office towers and post office lobbies as well as to any actual blue post boxes that are mounted on walls. So while I have attempted to generate the most informative listings and maps possible from the raw data provided, you should still take these data with one or more grains of salt. (See an error or omission? Let us know in the comments. It is possible that many more post box collection points exist in sporadic but concentrated clusters throughout a couple of metropolitan regions.)

"POST" listings appear pretty accurate. Looks what happens when you employ Google Street View at on one of the points (321 Willings Alley) in Philadelphia: 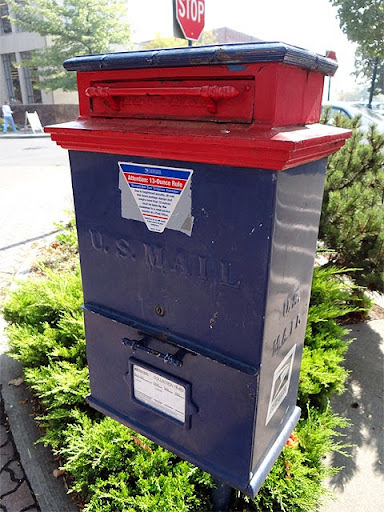 This old-style box is in front of the post office in Fort Meade, SD. 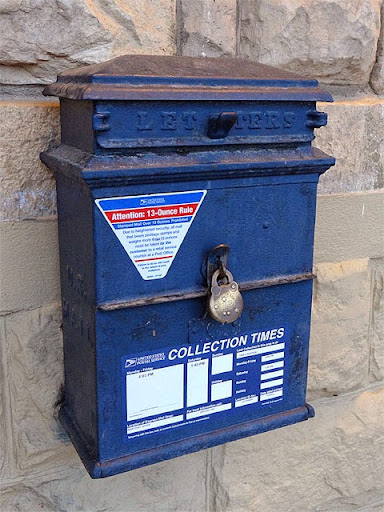 Here are images of two post boxes unaccounted for in CPMS data: 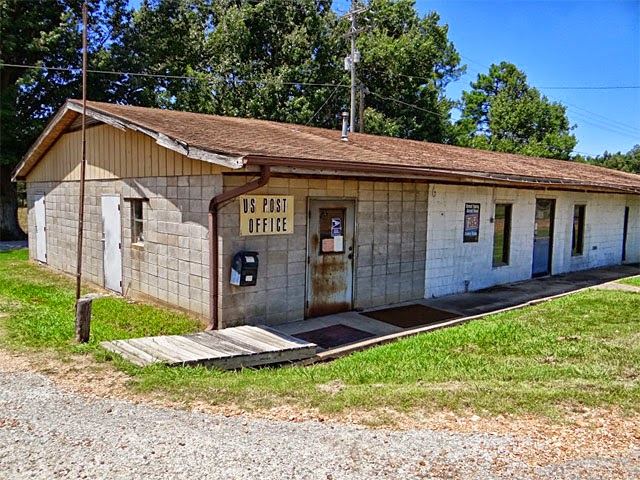 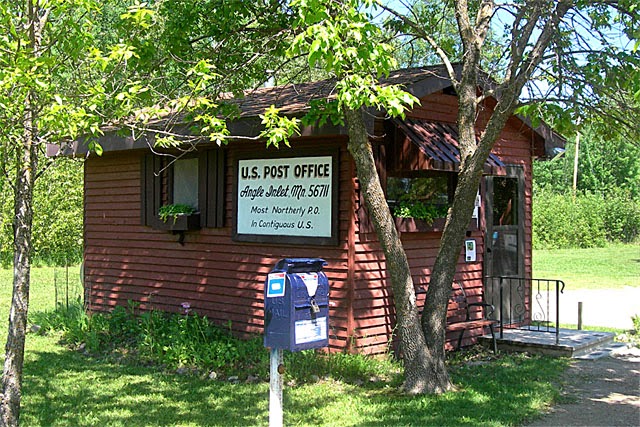 All styles of older post boxes are being slowly phased out by USPS. A USPS Delivery Operations specialist notes that "rust is a common enemy" for these boxes, and "there are no parts nor technicians available to repair these boxes if something happens." New standard (four-legged) collection boxes also enable the acceptance of larger flats and Priority envelopes, and so "[USPS does] not disappoint these customers when they arrive at a box" to deposit items larger than letter-sized mail.

Hope you enjoyed your tour of this little neck of the postal woods!
Posted by Evan K. at 9:36 PM