Four years ago the 200-plus-person community of Reading, Kansas was devastated. On May 21, 2011, a tornado struck the community, killing one, flattening dozens of homes, and taking with it most of the village's business district, including the post office. (An image of the aftermath, taken by Jim Saueressig, can be found here.) USPS operations in Reading were immediately suspended; worse, the cessation of services was unlikely to be purely temporary. Some veteran readers of this blog might recall that the Postal Service was considering the closure of 3,700 [mostly rural] post offices, and Reading faced the outright discontinuance of its post office.

Reading is located in Lyon County, Kansas, about an hour's drive south-southwest of Topeka and 25 minutes northeast of Emporia. Here's a map. Note not only the location of Reading but also that of Lebo. Lebo is the site of the nearest post office to Reading.

Reading's postal operations had been relocated to Lebo after the tornado, and to reach it Reading residents had to undertake a 26-mile, 40-minute round-trip drive. At the end of 2011 the change was likely to be permanent. Imagine needing to take to the road for nearly an hour to purchase some stamps or access your mail! Reading residents had the option of picking up their mail at P.O. Boxes in Lebo or installing their own mailboxes to receive mail delivery service by rural carrier. (Note: Reading's rural carriers were also moved to, and continue to operate from, Lebo.)

Topeka's Capital-Journal newspaper has been covering the story for four years, and by mid-2011 the story was bleak. The town's post office had been in operation since the community's founding in 1870, and the story was likely to end right there. The tornado took with it two rich pieces of Reading's heritage: the post office and the historic 1915 building that had most recently housed it. Here is a photo of the Reading post office by John Gallagher taken in 2001, and part of the PMCC's massive Online Post Office Photo Collection: 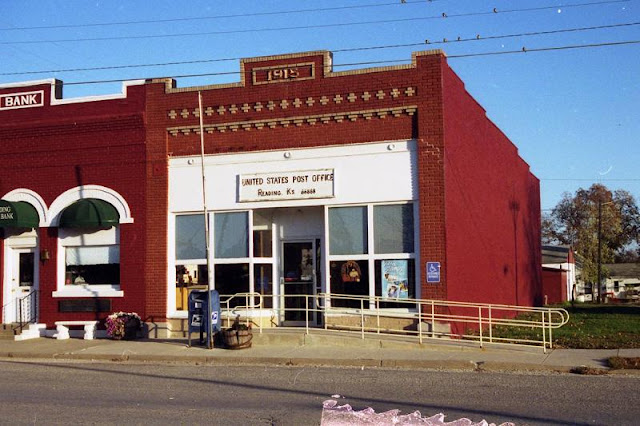 After some (presumably) bureaucratic stagnation the Capital-Journal reported in 2014 that Postal Service officially stated its intention to reopen the post office in Reading. A new, small site (merely 700 square feet in area) was sought at which to open a new postal facility.

The results of the efforts on behalf of both the community and the USPS have since borne fruit: the new Reading post office reopened in June at the old town hall. According to the (who else?) Capital-Journal "a USPS construction crew has renovated the building, installing new heating and air-conditioning systems, upgrading the bathroom to meet USPS standards and erecting a new flag pole and lighted post office sign." The improvements at the front of the building also include the addition of new steps, handicapped-accessible ramp, and attendant railings. The building has been freshly painted in an elegant blue-and-white scheme that accentuates the building's windows and door; they reflect the Sonic Eagle sign above the door. Even the aforementioned railings fit the color scheme! During the first month or two of operation the location's primary downside was the lack of signage identifying the actual name of the community. Demonstrated by the first photo below, it appeared that once again a community's local identity was superseded by the Postal Service's branding initiatives. (It's a trend the author does not care for at all.) In that sense, while the building is clean and beautiful, its standardized design had been entirely devoid of any character that would actually make the new post office the community's own.

Our friend Steve Bahnsen drove out to Reading to see the new post office for himself. This photo was taken in July. Steve reports that the post office reopened Monday, June 29, 2015. 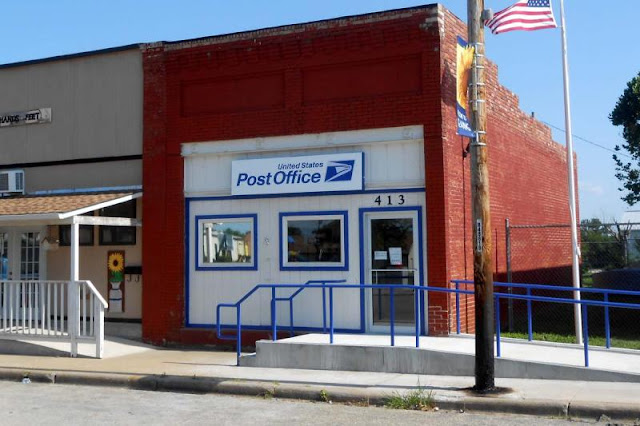 (Update, 9/12/15:) Jordan McAlister, a road trip warrior from the Midwest and friend of GP, visited the Reading P.O. on Sept. 7 after reading this very article, and his photo shows the new stenciled signage in the post office's front window. It's in a rather odd font, but at least it's authentic! Jordan's original photo can be found here. 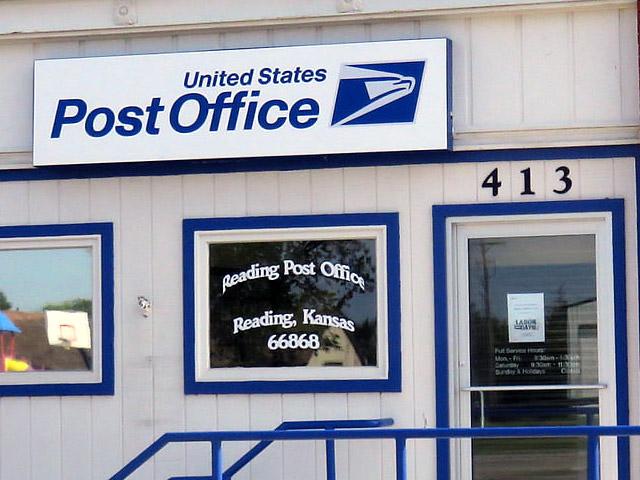 The new post office is located at 413 1st Street. USPS's Locations tool states that the hours for the post office are 9:30 to 1:30 M-F with two morning hours (9:30 to 11:30) on Saturdays. The facility is accessible 24 hours a day so that residents can access their P.O. Box mail any time they choose. The post office is a RMPO (Remotely-Managed Post Office) as per POStPlan.
Posted by Evan K. at 1:56 PM