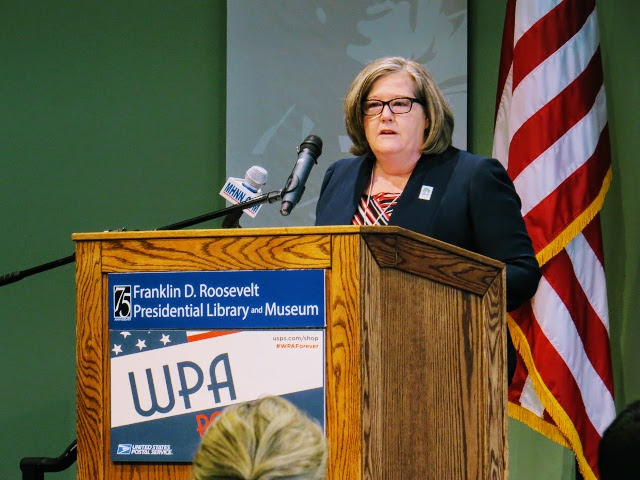 The series of ten stamps was made available for sale nationwide in a booklet-of-20 format beginning on March 7. The Works Progress Administration (later Work Projects Administration—each WPA) was perhaps the capstone of Franklin D. Roosevelt's ambitious New Deal, a set of programs which impacted all corners of the American social and geographic landscape as part of a massive effort to combat the effects of the Great Depression. The WPA operated between 1935 and 1943, and is best known for the staggering array of physical infrastructure development projects it undertook: more than 1,000 airports were developed; 24,000 miles of sidewalks, and sewers were installed; 40,000 public buildings were constructed, including schools, libraries, and hospitals; thousands of parks were developed; and hundreds of thousands of miles of roads built or improved with WPA labor. The list goes on. 8.5 million unemployed Americans were put to work as part of WPA projects that benefited the public good.

In addition to manual laborers the WPA put thousands of white-collar workers to work. Women were employed as seamstresses (creating and repairing 382 million articles of clothing), nurses, and school cafeteria workers (serving 1.2 billion school lunches). The new WPA Posters stamp issue celebrates a lesser recognized accomplishment of the WPA: poster artwork produced by a division of an arts program, which was known as Federal Project No. 1. As part of "Federal One" WPA artists created murals and sculptures for public buildings; musicians played in Federal Music Project orchestras; and thespians performed in Federal Theatre Project plays. WPA artists also created posters that were displayed in public places. These posters encouraged exploration of America's landmarks and natural treasures, "education, health, conservation and other civic ideals" (USPS). Two million posters of approximately 35,000 designs were produced. Ten of these designs are commemorated with the new WPA Posters stamp issue. 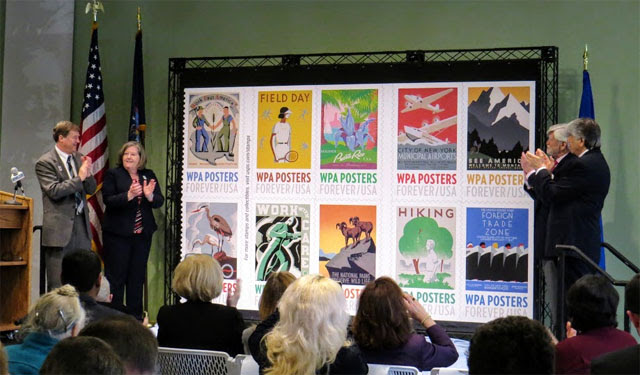 "These stamps commemorate the work of my grandfather's most ambitious New Deal program and the artwork generated from the WPA artists," declared David B. Roosevelt, grandson of Franklin and Eleanor.

Postmaster General Megan Brennan dedicated the stamps at the ceremony, lauding the "simple, effective, and striking" style of the artwork created as part of the WPA's poster program. FDR, an avid stamp collector, "understood the power of visual design" and the WPA's artwork was "bold and energizing." The designs featured on these stamps are "classic and enduring" images that continue to appeal today.

The Library of Congress maintains the largest collection of surviving WPA poster artwork. Digitized images can be viewed here.

It's only fitting that the stamps were inaugurated at Hyde Park in Dutchess County, explained Anthony Musso, author of FDR and the Post Office. Dutchess County is home to the five 'FDR Post Offices': Beacon, Wappingers Falls, Poughkeepsie, Hyde Park, and Rhinebeck. Each of the five distinctive post offices was constructed during FDR's presidency, and FDR himself had a hand in the design of each. Each was built with locally quarried stone and each possesses sizable or otherwise distinctive works of New Deal artwork inside. (Beacon, Hyde Park, and Rhinebeck house full lobby-wraparound murals; Wappingers Falls has two triangular murals painted directly on walnut wood, and Poughkeepsie's houses five large murals on two stories.) In each case the New Deal artwork displays aspect of the community's heritage. The art was created and installed in public buildings so to be accessible to all people. Four of the five post offices (all but Beacon) were designed after historic buildings in each community. Poughkeepsie's post office— the "Grand Palace"—was designed to emulate the former courthouse in the city in which New York became the 11th state to ratify the Constitution, in 1788. Collectively the five FDR post offices in Dutchess County are among the finest and most concentrated collection of New Deal post offices in the country. 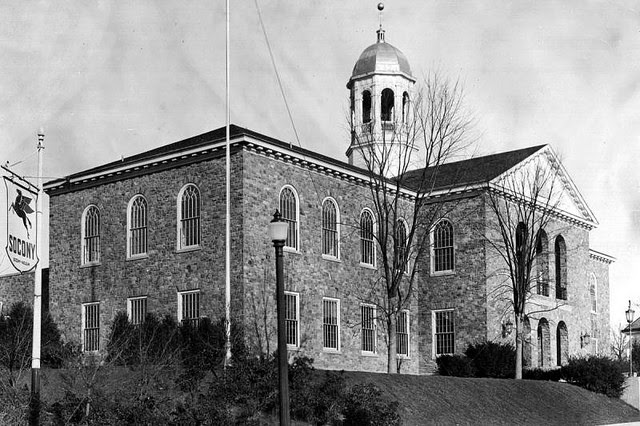 [Note: I must correct a popular misconception that was repeated several times by the speakers at the stamp ceremony (and, alas, even by me in the past). New Deal post offices and their attendant artwork were not themselves products of the Works Progress Administration (WPA). Rather, they were products of parallel but separate New Deal programs that were overseen by the federal Treasury Department. Post office building construction was overseen by the Public Buildings Branch (1933—1939) and Public Buildings Administration (within the Federal Works Agency, 1939+), with many facilities funded in conjunction with the Public Works Administration (PWA). Federal building artwork was commissioned by the Treasury Section of Fine Arts ("the Section", or SFA) and Treasury Relief Art Project (TRAP), not the WPA's Federal Art Project.] 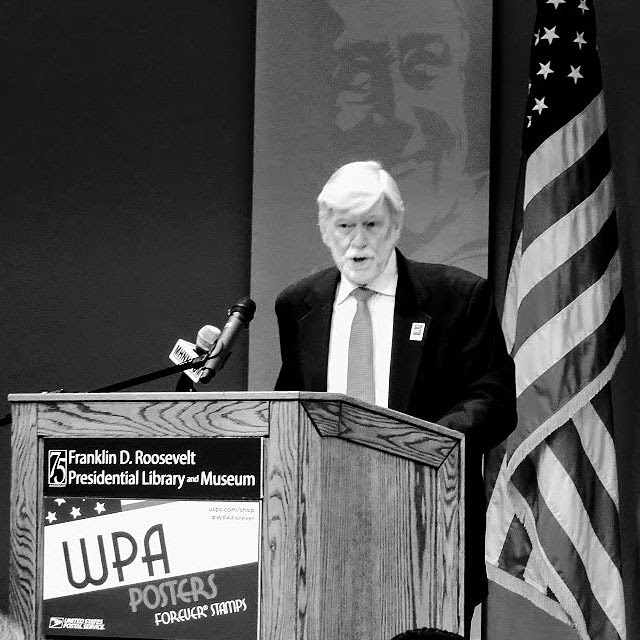 Franklin D. Roosevelt was an avid stamp aficionado. At its peak his collection of stamp numbered 1.2 million items. Collecting and studying stamps "helped save his life," declared Ms. Brennan. Philately was "like a Zen meditation for him," stated Mr. Musso. According to the National Postal Museum, "As a child, he looked to stamps for knowledge about the world. As a polio-stricken adult, they offered solace." David Roosevelt affirmed the value of philately: it "makes us better citizens and innumerable ways enriches our lives."

The Franklin D. Roosevelt Presidential Library and Museum granted free admission to all attendees of the stamp ceremony. FDR's first stamp album was put on display at the museum for the first time.

One special guest at the ceremony was Jeremiah Brennan, Postmaster General Megan Brennan's father. He lived through the Depression and was an admirer of FDR. Mr. Brennan came from Pennsylvania to attend the event.

Local coverage by the Poughkeepsie Journal and Hudson Valley Post.
Posted by Evan K. at 1:35 AM