Take I-70 from Pennsylvania toward Ohio and you'll pass through West Virginia. Though not for long—you'll be in and out in a mere 14.2 miles, a blink of an Interstate eye. You'll have driven through what's known as the Northern Panhandle of West Virginia, a 63-mile spit of land that hugs the western end of Pennsylvania out to the Ohio River. The Northern Panhandle consists of four counties, collectively housing 132,000 people. The largest population center here is the city of Wheeling, which historically straddles the Ohio. There are large hills that bound the city center to the east, though that has't stopped other communities from sprouting in other comparative lowlands to the east.

Let's have a look at some maps! Below, a map showing Wheeling in West Virginia, and a satellite overview of the Wheeling area. 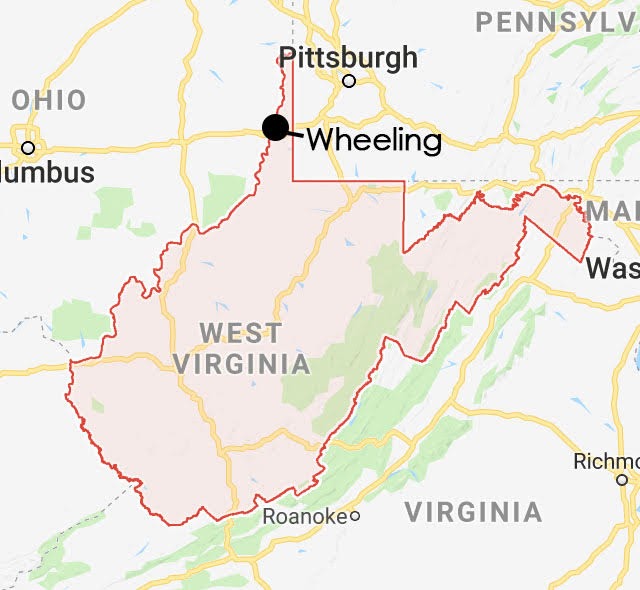 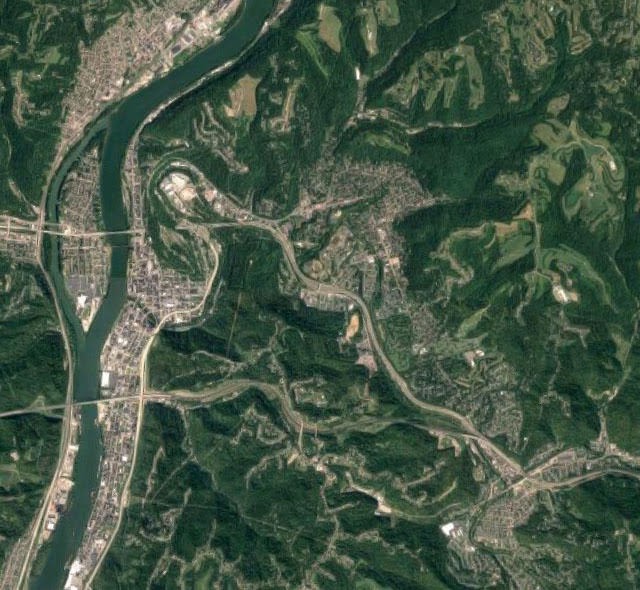 Wheeling developed during the 19th century as an important stop in a multimodal transportation hub. In addition to hugging the Ohio River, Wheeling lay on the route of the National Road and the all-important B&O Railroad. As with so many Rust Belt communities, Wheeling has had to undergo economic renewal following the depletion of local manufacturing.

The city has a couple of stunning historic federal buildings and, until recently, was a mail processing hub. Here's the present postal layout, excluding one up-river site that I did not get to photograph last summer. 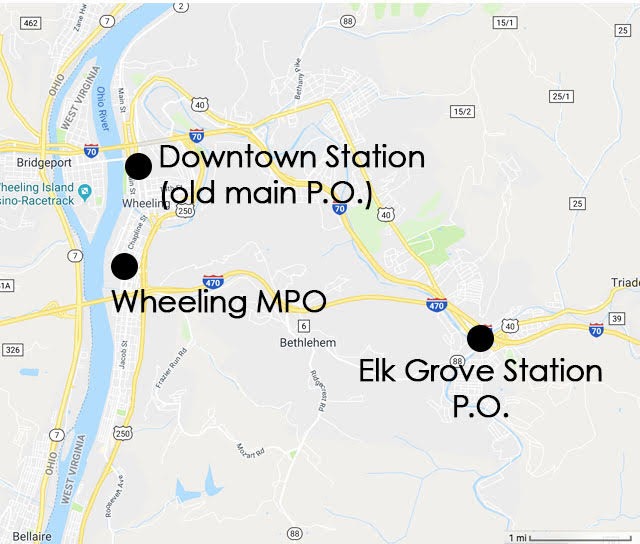 Wheeling houses an extremely early federal building dating back to the pre-Civil War era. Now West Virginia Independence Hall, this 1859 construction served as a U.S. custom house, courthouse, and post office. It is also the spot from which the western counties of Virginia would secede and form, well, West Virginia in 1863. (An alternative name for the state under consideration was Kanawha.) Upon completion of a new federal building in 1907, this building was sold to private interests and subsequently expanded. Most of the modifications to the original structure were reversed after the State purchased the structure as part of the West Virginia centennial commemoration. Thus, the building better reflects its original mid-19th-century appearance now than it did a century ago.

West Virginia Independence Hall can be found facing Market Street, at the northeast corner of Market St. and 16th St. 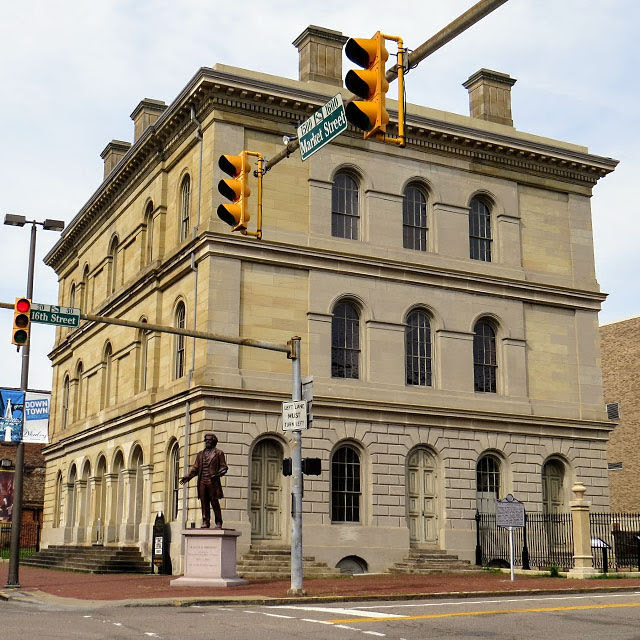 The Federal Building and U.S. Courthouse on the west side of Chapline Street, between 12th and 11th Streets, was built before the advent of what we might now call traditional federal building cornerstones. You can, however, see the date of construction (1905: in Roman numerals, MCMV) above the building's front entrance. The building has been expanded multiple times, including during the Great Depression, and most recently in 2002-4. Inside, most postal operations have been relocated, but retail operations and banks of P.O. Boxes are still present on the first floor. 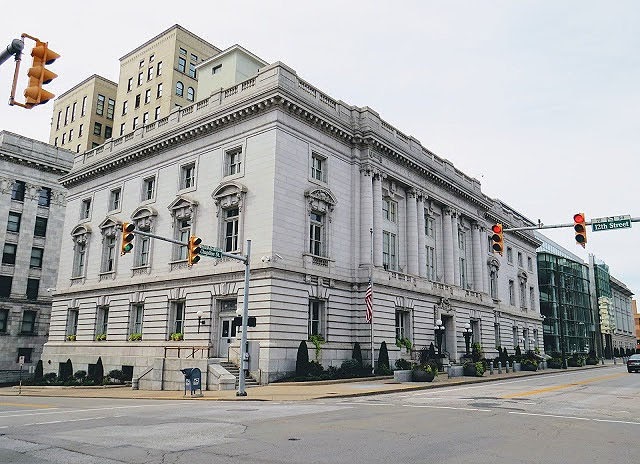 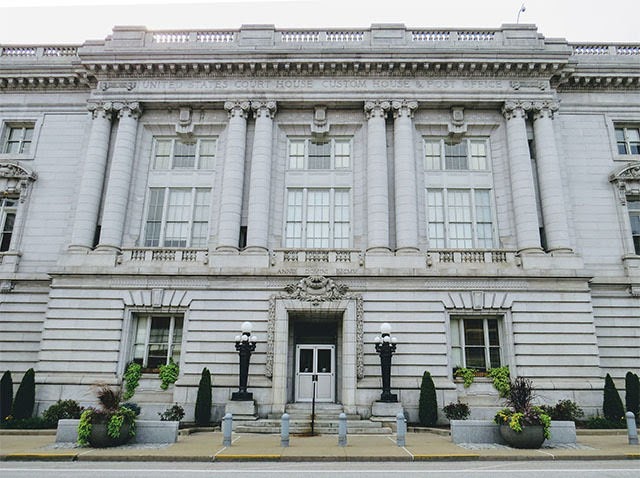 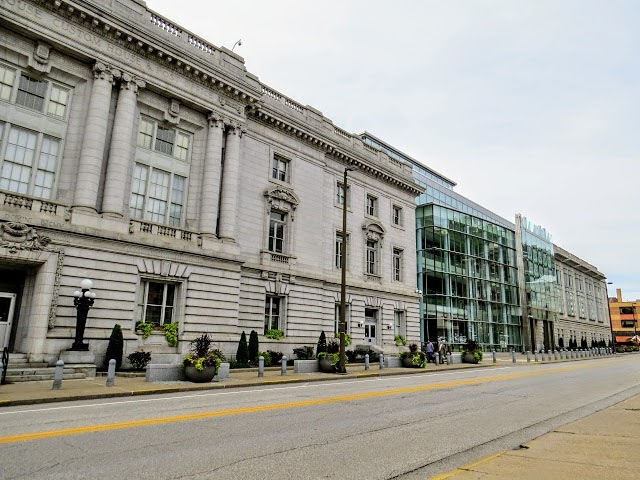 In 1966 a new postal facility was built south of Wheeling Creek, about 0.9 miles south of the Federal Building. The building housed retail and delivery operations, and for decades mail processing operations as well. Wheeling Processing and Distribution Facility (P&DF) operations were relocated to Pittsburgh in 2010, a 60-mile drive away.

A few miles up the road from the main post office is a station in Elm Grove (which formerly had its own independent post office). Here's a photo; this post office site has been in operation since 1986. 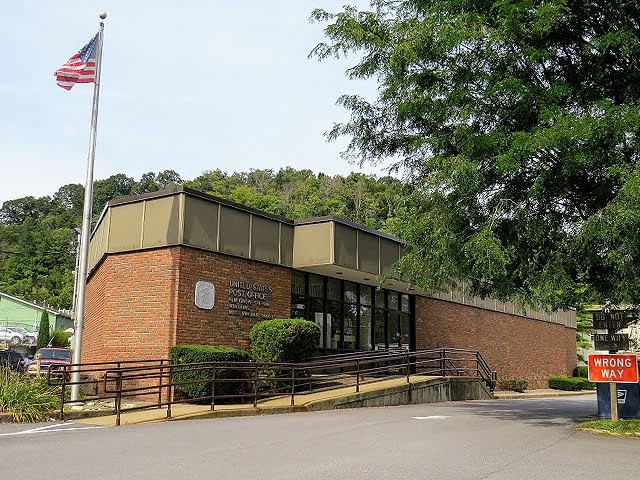 (Additionally, there is another station, not mapped, 3.8 miles up the road: Warwood Station, that is under the jurisdiction of the Wheeling postmaster. Hopefully I'll get to visit that the next time I'm in the area.)