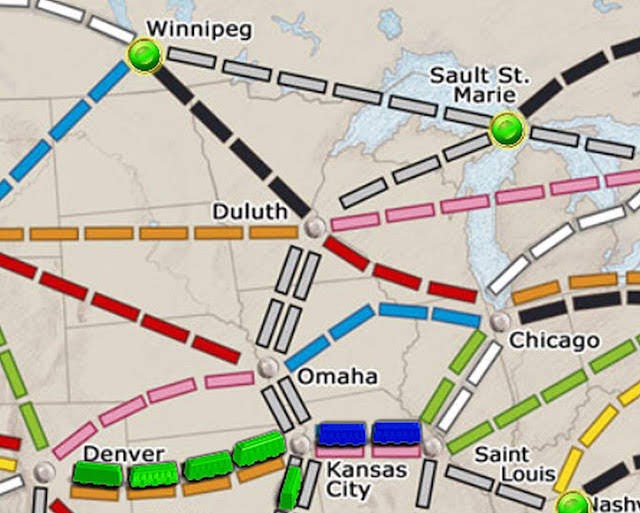 Duluth is so much more than an important city in Ticket to Ride. (Note: the board places Duluth where Minneapolis actually is. Let's have a look at a real map.) 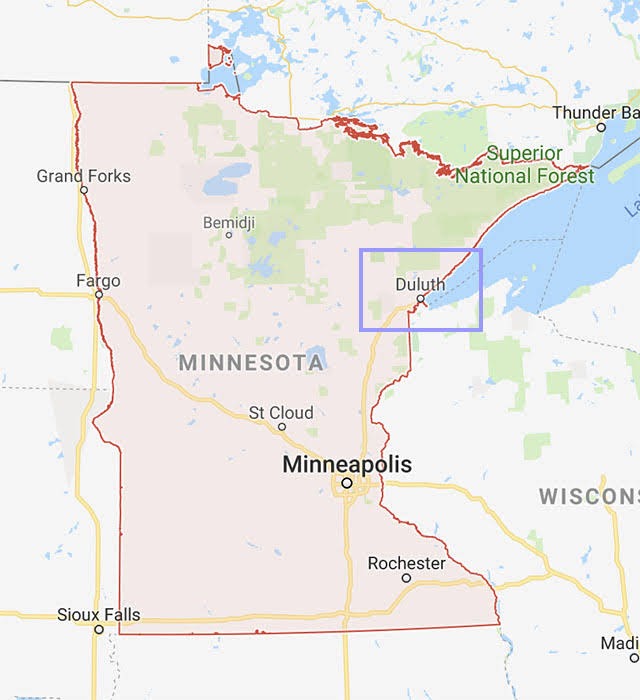 Duluth hugs the shoreline of the very western edge of Lake Superior, which makes for wonderful dawn vistas because the city is largely built up the slope of a hill facing east. To wit: here's a 3-D rendering via Google Earth, and a photo from my stay's bedroom window. 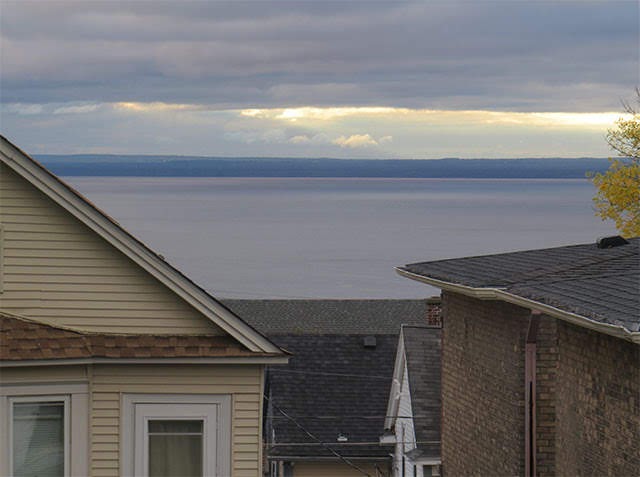 The Minnesota Historical Society wrote in 1955 of the early establishment of the Duluth (and neighboring) post offices. Duluth's has been in operation since July 6, 1857. "Between May 13, 1856, and December 31, 1943, sixteen towns adjacent to Duluth maintained their own post-office establishments before they were discontinued and made either branches or stations of the Duluth post office." This is modest compared to the "hundred and sixty-five post offices have existed at one time or another in St. Louis County since it was established on March 3, 1855 ..."

That article presents the following as Duluth's first post office: 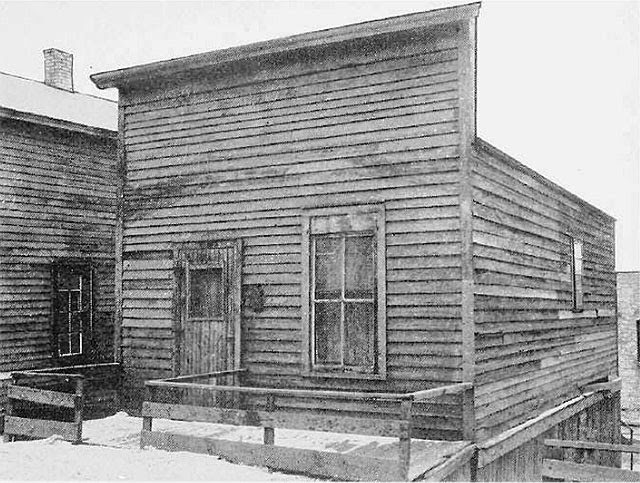 The GSA writes about the need for a permanent federal building: "Duluth's sawmills thrived by the end of the nineteenth century, and the city became the nation's fifth busiest seaport. In 1892, the city's first federal building—a post office, courthouse, and custom house—was constructed."

It was located at W 5th Ave. and 1st St. The building has since been destroyed, but here's an image from around the time of its completion: 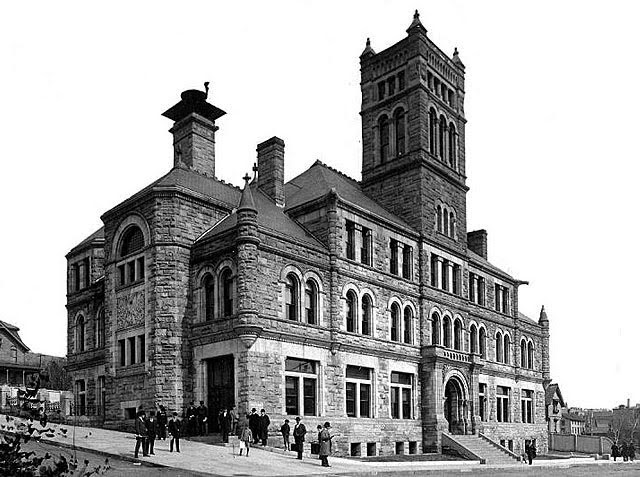 
"As the city continued to expand, officials decided to create a civic center and in 1907 invited prominent architect and planner Daniel H. Burnham to develop a plan that would include a new county courthouse, city hall, custom house, federal office building, and plaza. A pioneer in city planning, Burnham was responsible for the layout of the 1893 World's Columbian Exposition in Chicago, as well as city plans for Chicago and San Francisco. His plans emphasized the relationship between buildings and their sites. Burnham's design for Duluth, which the city commissioners unanimously endorsed in 1908, incorporated components of the City Beautiful movement, which espoused the use of formal arrangements, axial streets, and monumental, classical public buildings in city planning.

The county courthouse and city hall were constructed first. In 1916, the federal government purchased a site within the civic center for the construction of the new federal building. The U.S. Post Office, Courthouse and Custom House was designed in 1928 by James A. Wetmore, acting supervising architect of the U.S. Treasury Department, after Congress approved a $1.2 million appropriation. Construction commenced the following year and was completed in 1930."

This image from the National Archives shows the Civic Center post office ca. 1930. 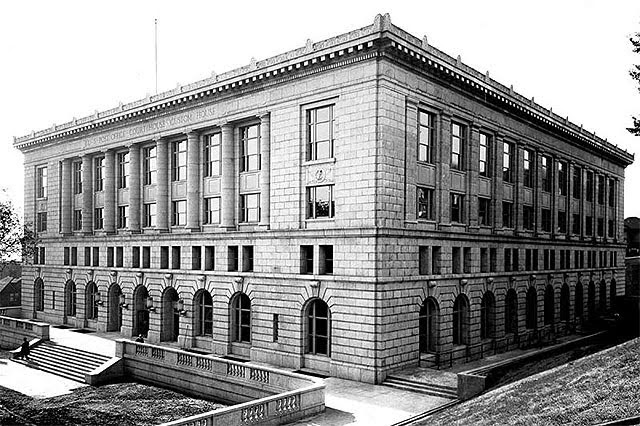 Most postal operations have moved to a new facility south of downtown, though a modest retail operation can be found on the first floor. You have to pass through security to visit it. Unfortunately no photos are allowed inside, but here's the Federal Building, and its cornerstone, as of last autumn. 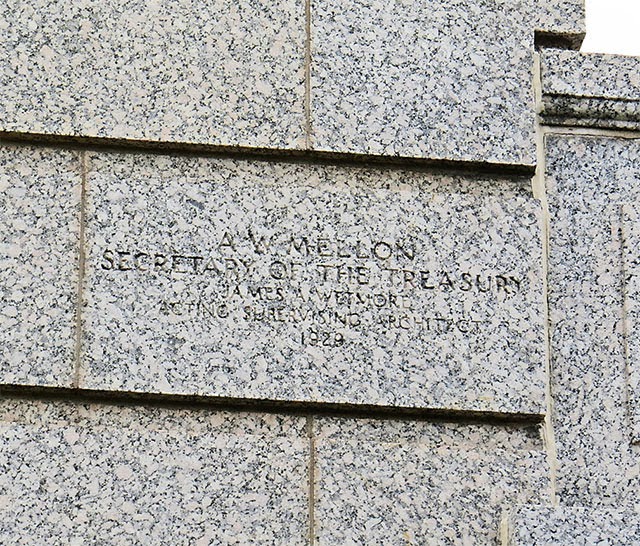 The cornerstone is located around the side of the building [northeast corner]. Since the building is built on a slope, you have to look up to spot it. Its text reads: "A W MELLON / SECRETARY OF THE TREASURY // JAMES A WETMORE / ACTING SUPERVISING ARCHITECT // 1929".

Primary post office operations relocated from the Civic Center to a location about two miles south, in 1970. You can see the post office from I-35; it's just about right off the S 27th St. exit. The 133,000-square-foot facility was built to house retail, mail processing, and vehicle maintenance operations.

Duluth had been the processing hub for mail from metropolitan area, the Iron Range (north interior Minnesota), and the North Shore (along Lake Superior). However, mail processing operations were moved 160 miles down I-35 to St. Paul in 2015. In addition to slowing down local mail (which would have happened anyway, at least in part, due to a nationwide change in service standards), it caused mail collection times to get bumped up in the region. As Duluth News Tribune reported, "The last mailbox collection time in Duluth will be 3:15 p.m. ... Previously, the last collection time at that box — the latest in the area — was 8 p.m. Mondays through Fridays and 7:45 p.m. on Saturdays." Community and other elected officials (including then-Senator Al Franken) were opposed to the change.

The following photo was taken by the author at a distance of one mile(!) along a hill road called Skyline Drive, which overlooks the city. The Duluth main post office is the red building in the exact center with vertical white stripes. I-35 can be seen behind it, and in the background are massive ship/rail transfer facilities, including two 2,500-foot-long rail piers. 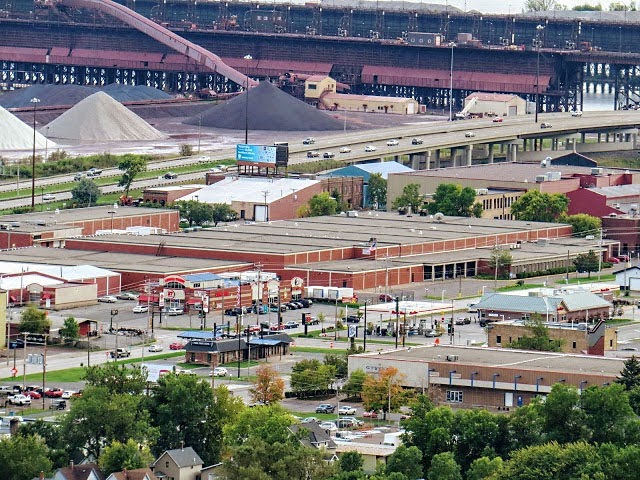 In addition to the Civic Center Station, the Duluth post office oversees operations at several other post offices: Lakeside Station; Miller Hill Station; Mount Royal Station (a USPS-owned facility); West Duluth Station (located about four miles inland); and the Proctor Branch in the next city over. USPS also leases a modest amount of space (<100-square-foot) for P.O. Boxes at the Pine Lake Superamerica gas station, which also houses a Contract Postal Unit (CPU). Such an arrangement would not be allowed at new CPUs; this location is grandfathered in.

Photos of all the locations can, of course, be found at the PMCC's Online Post Office Photo Collection, which now features 29,000 photographs. I personally find Lakeside Station photogenic: