Internal emails obtained via the Freedom of Information Act reveal that an "artwork workgroup” of high-level United States Postal Service (USPS) officials, including attorneys and USPS's Federal Preservation Officer, has directed facilities and maintenance personnel to cover up 80-year-old murals housed at 16 post offices spanning 12 states. USPS is considering the murals' outright removal, and it is unclear whether this initiative will expand to include historic artwork at additional locations.

Recent photographs from four of these locations show tarp-like plastic sheets, resembling heavy-duty garbage bags, covering the entirety of their respective murals to render them unviewable. The coordinated effort is without modern precedent, and the Postal Service has repeatedly declined to explain its actions in response to inquiries from local news reporters and even members of Congress.

Before and after (covered): Photographs of the 1940 mural, "Cotton—From Field to Mill," at the Jackson, Georgia post office, taken Jan. 2008 and Aug. 2020. Photos courtesy Jimmy Emerson. 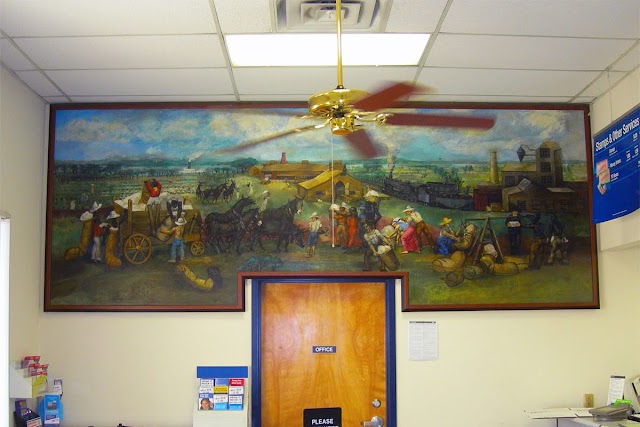 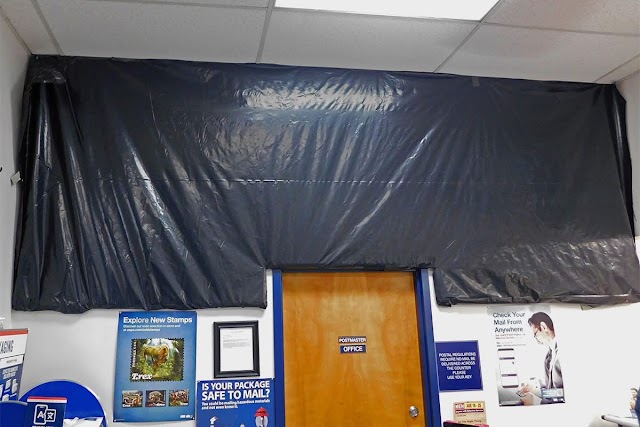 Impacted post offices serve locations ranging from small cities in Illinois and Florida to the suburbs of Boston and Baltimore, as well as multiple locations in the Deep South. Several of the post offices are listed on the National Register of Historic Places. One of the post offices, in New York's Hudson Valley, was uniquely designed to the specifications of President Franklin D. Roosevelt, whose New Deal programs commissioned each of the murals.

Postmasters and employees at post offices have been instructed not to respond to requests for comment regarding the murals. Anecdotal evidence suggests that many know little, if anything, about the situation. Requests to USPS for information are funneled through communications "field managers" for inquiries from "the Postmasters and media," and Government Relations (GR) officials "for any congressional inquiries they may get." The response is exactly the same.

Internally this blanket response is known as the holding statement, which reads as follows:

The Postal Service respects and embraces the uniqueness and diversity of every individual. And we encourage contributions of people from different backgrounds, experiences, and perspectives, including those of our employees and members of the communities we serve.

While it is the policy of the Postal Service to preserve and protect the historic artwork in its collection for future generations, we are mindful that certain murals generate strong feelings for some of our employees and customers.

With that in mind, discussions are being held on how to properly handle and safeguard the future of those pieces. We are evaluating each of the pieces and we will work to ensure that appropriate action is taken on select murals, if deemed necessary.

On Friday, August 28, Postlandia emailed the following questions regarding the murals and "artwork workgroup" to two senior Public Relations Representatives, for this article:

• When and why was this group formed? Who is on it and why?
• How were these murals selected for covering and analysis [for potential removal]?
• How are the murals being analyzed? When will a determination for the murals' “final disposition” be complete?
• What are the options being considered for the murals’ “final disposition”—e.g. returning to the way things were; adding informational plaques, etc.; relocation to storage; relocation to a public-facing institution, like a museum; or destruction?

Instead of answers to any of these questions, the author was treated to a startling string of private Reply All emails to which he was accidentally cc'ed, in which the two senior Public Relations officials questioned his character and the motivation for this journalism. They proceeded with the following internal discussion:

At this point one of the officials attempted to recall two of the emails; they later apologized for the "inadvertent emails" while fully denying the request for information.

The Postal Service is responsible for the preservation and maintenance of most of the 1,400+ murals, bas reliefs, and sculptures commissioned for federal buildings (including post offices) by the Treasury Department's Section of Fine Arts and similar New Deal agencies between 1934 and 1944. Over the years many of these works have been mistakenly attributed to the Works Progress Administration (WPA); however, the WPA's Federal Art Project did not participate in the creation of artwork—also known as "decorations," or "embellishments"—for federal buildings.

The covering of these murals deviates sharply from modern USPS precedents. In 2019, when one couple petitioned for the modification or removal of the mural "Three Ages of Phoebe Goodell Judson," which has been on display at the Lynden, Washington post office since 1942, a USPS official "cited the General Services Administration Fine Arts Policies and Procedures in his response saying “adverse public opinion ... does not justify the relocation, covering from public view, or removal of artwork."

As recently as July 2020, in response to complaints about the mural "John Eliot Speaks to the Natick Indians," housed at the post office in downtown Natick, Massachusetts since 1937, a USPS Communications official confirmed:


Our policy has always been not to cover or remove these artworks based on one person or group's artistic interpretation, but to preserve the works in our custody for future generations. In some cases, we have added interpretive text alongside a mural to give it historical context.

It is unclear how covering and potentially removing the murals supports this mission.

Generally, the Postal Service only relocates such New Deal artwork when the agency "disposes" of a historic building bearing such artwork, and the artwork needs a new home (see: Greenwich and Fairfield, Connecticut; and Virginia Beach, Virginia). This is not the case with any of the 16 post offices whose murals are impacted by the current initiative. While USPS has declined to specify why these particular murals have been targeted, in multiple instances the works have been subjected to one or more public complaints regarding their potentially discomforting content. Some depict slavery in some capacity.

Internal USPS emails reveal that three post offices with "American Indian themed mural subject," which have also been "subject of recent complaints," are excluded from the present program. Instead, informational statements with text provided by the Federal Preservation Officer are being posted at the post offices: Natick, Massachusetts; Wayne, PA; and Greensboro, GA (more about this one later). Some question why USPS did not immediately take this approach with the now-covered murals, presuming it ultimately decides not to relocate the works.

While USPS Handbook RE-1 does not discuss the remedies available under such circumstances, the parallel policy of the General Services Administration (GSA), which manages thousands of Federal properties and an extensive New Deal art collection of its own, is quite clear: "GSA's policy is to retain the existing location of an installed artwork—be it the original location or a permanent relocation—and to honor the artist's original intent. Adverse public or tenant opinion does not justify the relocation, covering from public view, or removal of artwork" (Fine Arts Policies and Procedures § 3.4.1: Relocation Eligibility). It is unclear why USPS's policy differs from the GSA's.

USPS guidelines state that all changes to a mural's disposition must meet with the approval of the Federal Preservation Officer (FPO)—currently Daniel Delahaye, who has held the position since December 2013. The inclusion of Mr. Delahaye and Postal Service lawyers on the artwork committee suggests that at least some of these murals are being considered for removal and/or relocation to a non-USPS location. Per Handbook RE-1, § 333.2 ¶ 2:

Precedent raises questions as to whether these regulations were intended to permit USPS's current course of action; however, it is possible FPOs have just opted not to execute their full authority in the past. Under a broad interpretation of this text, USPS may make any changes to the disposition of any or all items in its New Deal Art Collection, at any time, so long as the move is approved by the Federal Preservation Officer.

The Postal Service has not responded to an email seeking clarification of this matter.

Where Are the Murals?

An internal USPS email (obtained under FOIA), dated August 4, identifies the 16 post offices whose murals were to be covered, stating that the "process should be complete within three weeks." [Updated, Sept. 4:] Visitors to six of these post offices have confirmed, by way of social media post or email to Postlandia, that the affected murals have been covered: five in their entirety, and one in part—by a USPS banner, no less. As of August 28 the 12-panel mural in Rhinebeck, New York, had not been covered.

The post offices (and respective murals) are:
The author invites journalists interested in pursuing this story to contact him for access to the FOIA response cited in this article. Thank you—Evan K.
Posted by Evan K. at 4:20 PM