No, it hasn't closed! Postal Bulletin botches one

By and large, only folks within the Postal Service read the bi-weekly Postal Bulletin. Heck, they're supposed to read it because the Bulletin informs them of all new postal regulations changes. Regardless, Bulletin issues are available to the general public and I follow each new issue closely to find out whether any changes affect my hobby-work, which post offices USPS wants to announce the closure of (after the fact) this time around, and see what interesting pictorial cancels I might want to mail out for in coming weeks.

The Address Management section (namely Post Office Changes, the list of closures) has been very large of late, and the current edition's notes the discontinuance of 11 offices in Alabama. Among the closures was a very bizarre entry:

This announcement states that the West York post office, a branch of York, was officially discontinued September 10, 2011. There's just one problem, and it's one I'll admit to never having seen before in a Postal Bulletin -- it's not closed. I know this because I was sitting in their parking lot on November 22, listening as my NPR interview aired. I got their postmark and, of course, photos of the office, too.

The West York post office is in a strip mall and open from 8AM to 6PM weekdays, and 9-2 Saturday. I can't think of any reason they would close this in the near future. 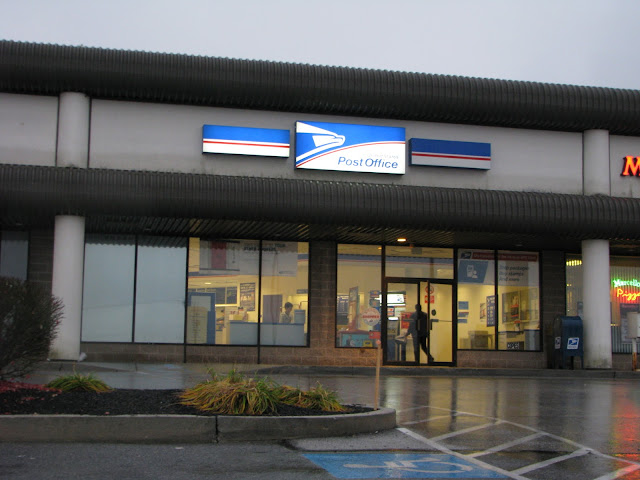 I'm open to the possibility that I might be missing something... Do any readers have ideas as to how this happened?

(Also, if the appropriate person is reading this, the phone number listed on the USPS locator tool for the York, PA Main Post Office is "no longer in service", as is the White Pages phone number listing for a popular CPU, Weis Market #71. That should probably be rectified. Furthermore, the New Salem post office is woefully misplaced on the map, and is not actually located adjacent to the West York location. See below:)