USPS introduced gopost kiosks, a proprietary self-service parcel locker service, just over a year ago in the D.C. metro area. Designed to be placed in high-traffic locations and used at any time of a customer's choosing, registered users can both receive parcels from -- and deposit prepaid packages in -- secure lockers. The kiosks are imposing: they are about 20 feet long and nearly eight feet tall. The structure is gray yet modern, featuring vibrant blue and red accents and a sloped roof. The structures are freestanding, but are designed to be tamper-proof in both the front and the rear. Most importantly, the kiosks increase access to USPS services. The author also suspects that gopost kiosks are also intended to shorten lines (in postal parlance: "improve WTIL:" Wait Time in Line) at post offices with busy Inquiry windows.

The lockers only accept package services; one cannot deposit outgoing First-Class letters into a gopost kiosk. According to this Postal Service FAQ, any Express or Priority Mail product can be handled through gopost, in addition to any parcels that are at least 3/4" thick. The Postal Service opened about a dozen gopost units in northern Virginia early last year, with expansion into D.C. and its Maryland suburbs last fall. I ran across one kiosk last June at the South Station post office in Arlington, VA. Note that this particular unit is both accessible 24/7 and doubly protected from rain. (Indoor kiosks do not possess the curved supports or the red top.) 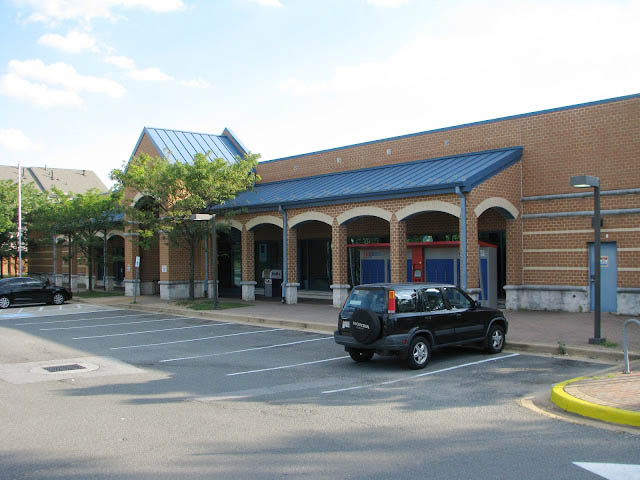 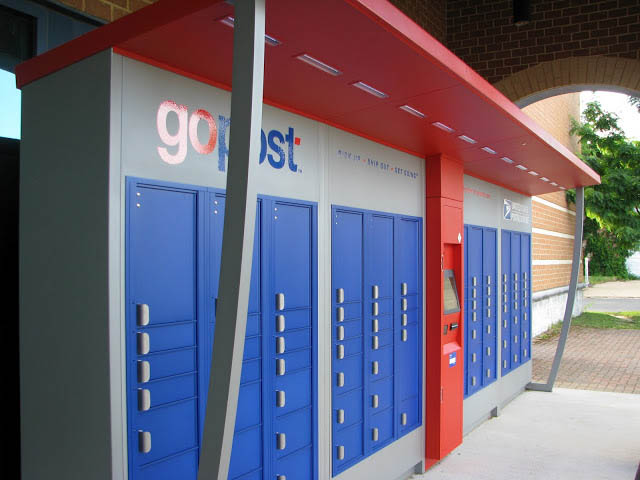 The first kiosk outside the D.C. metro area opened in Manhattan early February: the new unit at the Grand Central Station post office (outside Grand Central Terminal) opened to the public and saw its first customer usage on February 1. Its availability was announced by USPS New York District Manager William Schnaars at the first-day ceremony for the Express Mail-rate Grand Central Terminal stamp that afternoon. The kiosk at the Manhattanville Station on 125th Street opened soon after. A recent query to a staff member at that location suggests that the service is slowly gaining awareness and sees at least modest use.


Follows are observations and photos of each of the gopost locations in New York City.

At Grand Central Terminal's Grand Central Station post office, there can be as many as a dozen postal clerks on duty at any given time. (In fact, the operation features more staffed windows than this postal tourist has ever seen; again, that's over 5,000 post offices.) Retail hours are 7:30am—9:00pm weekdays (7:30am—1:00pm Saturday) though the lobby is open 24/7, which means that the office's gopost unit and the post office's Automated Postal Center are accessible all hours, as intended. The kiosk is instantly visible upon entry. 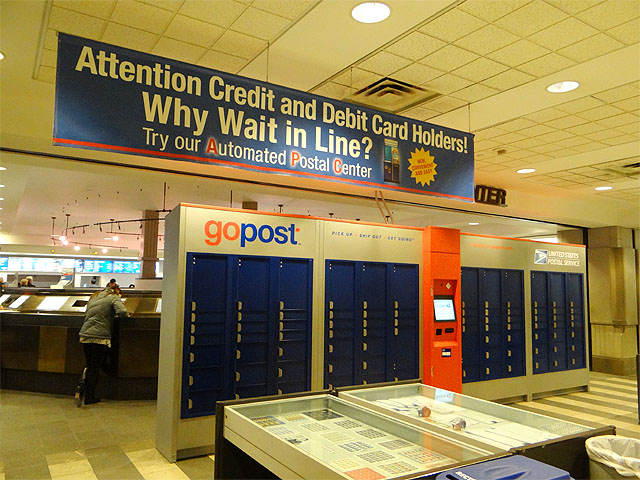 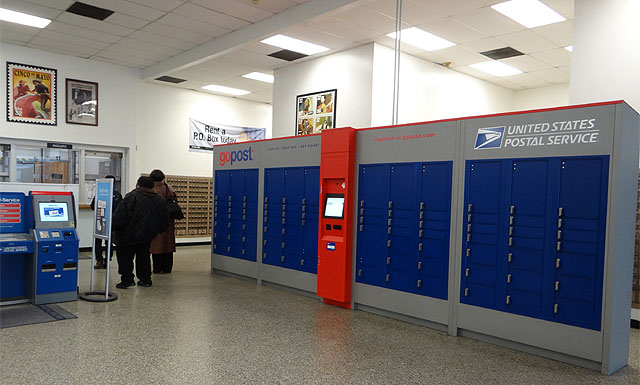 West Harlem's Manhattanville Station is very busy in its own right, and featured three active retail windows plus an Inquiries staffer when I visited last month. The gopost kiosk, whose profile is visible upon entry, commands attention but is not immediately inviting. More visible is the Automated Postal Center which faces the entrance. Retail hours are 8:00am—7:00pm weekdays (8:00am—4:00pm Saturday); however, the lobby closes with the retail windows, meaning both the APC and gopost kiosk are not available at all times. This mitigates their effectiveness.

Good additional candidate post offices for gopost units in Manhattan include the Rockefeller Center Station (among USPS's most expensive leases in the country) and FDR Station (East Side hub) post offices. A kiosk might look out of place inside the General Post Office / 'JAF Station'.


From experience, Brooklyn's Williamsburg Station post office is a reasonable location for a gopost kiosk. I say this because, in a community that has nearly doubled its residential population within the last decade, this post office is woefully overcrowded and lines can be dreadfully long. Until last year the neighborhood's postal operations were supported by a Contract Postal Unit called the Better Letter CPU, yet that was forced to close due to a bizarre provision in the most recent USPS contract with the American Postal Workers Union (APWU). You can find my full write-up of that closure here.

Essentially, anything to mitigate the wait times and provide additional postal services to the people of Williamsburg is welcome news. 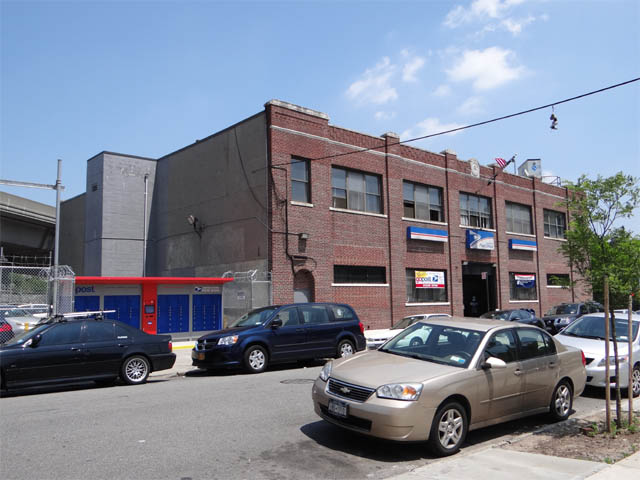 Retail hours for the Williamsburg post office are 9:30am—5:30pm weekdays (9:30am—4:00pm Saturday). But that doesn't matter in this instance because the gopost kiosk here is located outside. It features the red roof without the supports. From the looks of it USPS spent a lot of money implementing this unit: it recessed the barbed-wire fence (presumably sapping a couple of parking spots in the process) and flattened the sidewalk to create a sort of mini handicapped-accessible platform. 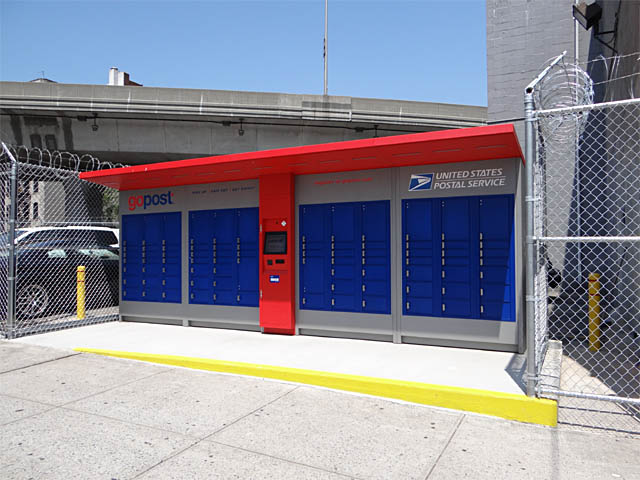 The problem with a gopost unit in Williamsburg is that the unit won't be of much use to the heavily Orthodox population, much of which considers Internet usage sinful. Ergo, they won't be able to sign onto the gopost website to create an account, nor receive emails or text messages to let them know that a package has arrived for them. I suppose the local hipster crowd would be up for a trial, however -- if they have the patience to undergo the process in order to use the system. After filling out an online form, you have to wait two weeks and bring some mailed forms and a card to a participating post office...


After [online] pre-registration, you should receive your gopost account card and packet in the mail within 7-10 days. To then activate your account, you will need to:

1. Complete the Authentication Sheet enclosed in the packet.

2. Take the Authentication Sheet to one of the Post Office™ locations listed on gopost.com/poauthentication.

3. Present one form of government-issued picture ID. (Please make sure your first and last name on your gopost account matches those on your ID.)

4. Receive a confirmation email that your registration is complete and your account has been activated.

Your new gopost card is for you only. Like a credit or debit card, only you should use your gopost card and assigned PIN. Other adult-aged (18 or over) individuals interested in using gopost may register free of charge for their own account, card, and PIN.

Yes, we get it -- this is the Postal Service's automated way of asking you the question "Does this package contain anything liquid, fragile, perishable or potentially hazardous?" But herein lies the fallacy: USPS is applying its bureaucratic processes onto what is supposed to be an entity designed for convenience. And that just won't work. The Office of the Inspector General reported, on May 6, on the results of USPS's initial gopost trial. The report found that "the Postal Service has not made any changes to its complex registration process," even after a full two-thirds of users who had initiated their registration process "gave up on their registration before finalization." Meaning, two in three people who thought they might want to utilize the system were turned off by the process needed to take part in it. Turning off two-thirds of your potential customers is never good.

The 13 original gopost kiosks experienced usage between 1 and 64 parcels per month, per unit. Not per locker; per the entire cluster of 80 lockers. Data for specific kiosks were redacted in the public OIG report.

So what does Going Postal make of it all? These gopost parcel lockers are cool, but: 1) unless they're placed in convenient locations; 2) unless people passing by can immediately figure out what the kiosks are for and why they should use them; and 3) unless the registration process is improved, then the program will be a flop.
Posted by Evan K. at 4:23 PM