Only in New York, II: Return of the Post Office in the Bagel Store

It's been two years since Going Postal first introduced you to the southern Queens community of Broad Channel and its attendant Contract Postal Unit at The Bay-Gull Store. It's been a delight to re-visit this operation and witness its evolution over the past couple of years, which is why the Broad Channel CPU receives another write-up today.

A lot has happened in the Broad Channel community and to the post office since then, not the least of which was the advent of Hurricane Sandy. Broad Channel, separated from the Atlantic by the sliver of land that is the Rockaways, features houses that directly overlook channels of Jamaica Bay. Folks here love to fish off their decks. Sadly, this meant heavy damage during Sandy last fall, and you can read about some of the flooding and devastation here and here.

Today the primary thoroughfare of Broad Channel, Cross Bay Boulevard, appears largely improved but is still recovering. Houses have new roofs, and new windows overlook the street. Buildings bear NYC Building Inspection signs. The Deli and Catering store is open for business (though the old Wharton Pharmacy -- site of the old CPU -- remains vacant after nearly three years; someone should open a restaurant in there). Dozens of cars pack the sidewalks toward Howard Beach (north of 'town') as fishermen swarm the bay...

However, signs of what occurred here still appear: some yards are littered and boards cover plenty of doorframes and windows. Plenty of siding still needs to be replaced. 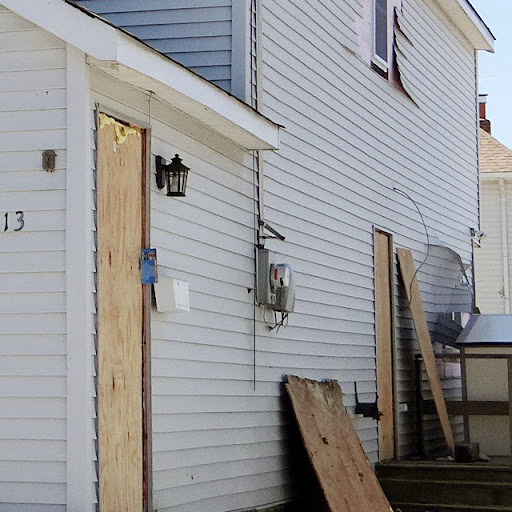 That said, this hand-painted sign at the corner of West 18th Road offers a glimpse into the spirit of this close-knit community. 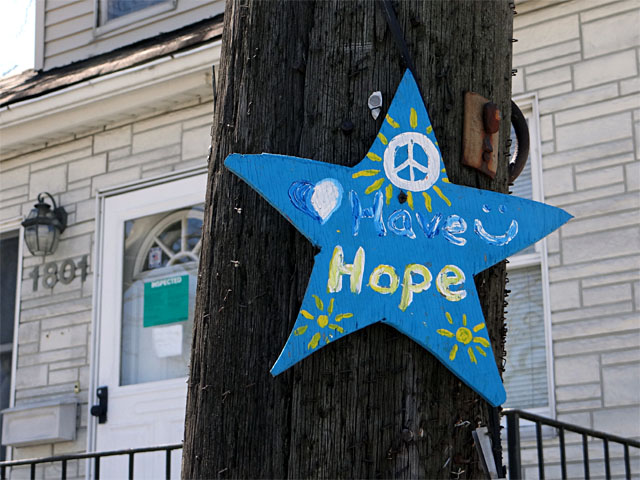 Entrepreneur Magazine reports that about a third of all businesses in the Rockaways and Broad Channel have still not opened, six months later the hurricane hit. The Bay-Gull Store was fortunate to reopen after six weeks, and has been re-establishing its services ever since. Its recovery mirrors that of the overall Broad Channel community.

Much of Broad Channel was covered with five feet of water during the storm, and Bay-Gull Store owner Pat Williams informed The New York Times that he was "up to his shoulders" as the storm hit, when he raced home to rescue his dog. His store was inundated and he lost nearly everything, from the postal counters to the "biggest freezer, the biggest refrigerator." (Read the full story here.)

After the storm, The Bay-Gull Store served as a community gathering and rallying point. Quote The Times: "The store's porch quickly became a meeting space, its empty cavern a supply distribution center, the surviving pieces of plastic furniture unofficial therapy chairs." Having witnessed the expansion of The Bay-Gull Store over the last two years, I can tell you that Mr. Williams is always looking for new ways to serve his community.

With no insurance, Pat had to rebuild from scratch. This included purchasing a new $17,000 oven [see next paragraph] with which to bake more of his signature cheese bagels, and folks were pleased to witness their return: 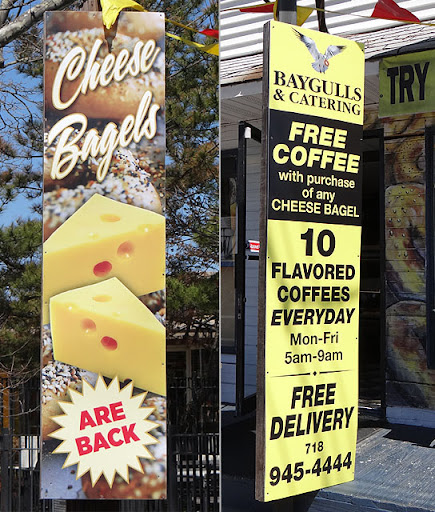 (Cheese baygulls come in five varieties: cheese; jalapeño; bacon; ham; and spinach, of which the latter are my favorite. There's nothing quite like 'em. Why? The Times writes the following: "They dress loops of uncooked dough in five cheeses — American, Muenster, Swiss, provolone and Cheddar — and then place them into an antique oven that slowly spins bagel trays without disturbing the melting cheese.")

Below: a stack of the delectable five-cheese cheese; I like to heat them up when I get home to get 'em all nice and gooey.

Of course, the special note here is the fact that Broad Channel will have its CPU back up and running shortly, after a six-month suspension of operations. The counter was destroyed, as were all postal materials -- the postal computer system, boxes, 'postmarking' devices, everything. The new setup will be somewhat different. For this it is be helpful to see some before-and-after scenes at the store. 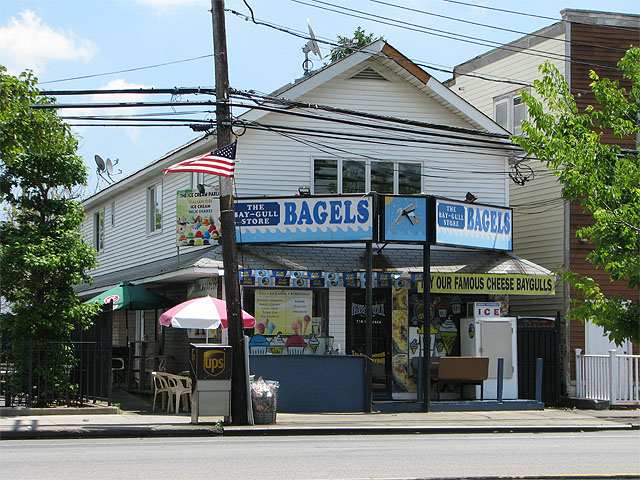 In the back: the postal counter alongside a party balloon display. 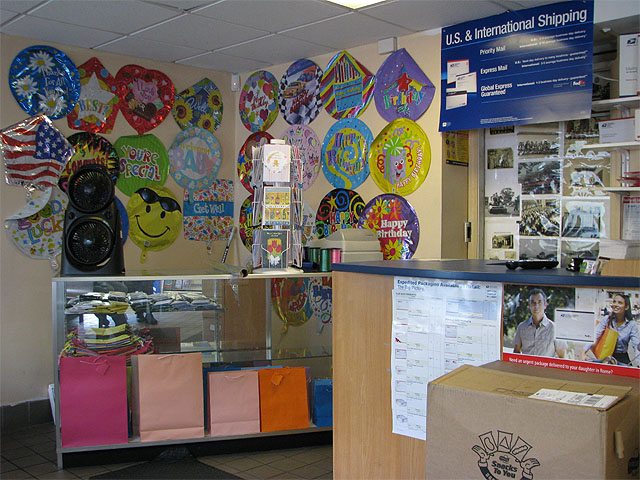 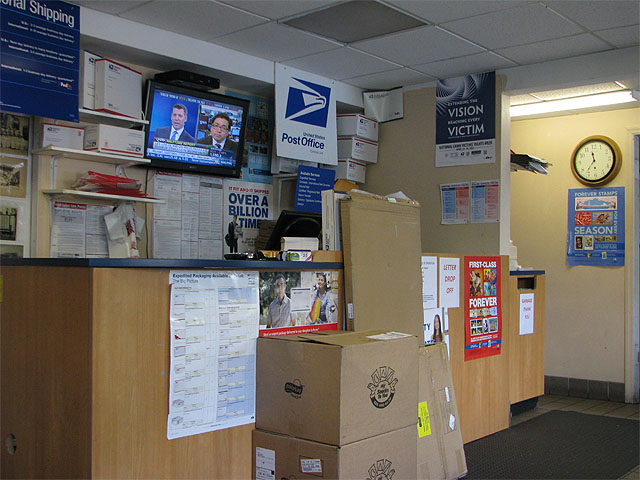 CPU signage outside, behind the ice cream window. 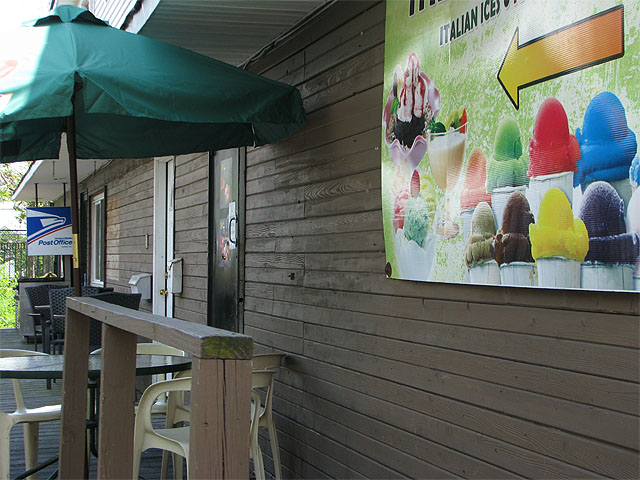 Presently the back of the store, which housed the Broad Channel CPU, the party balloon corner, and a Hallmark card stand, lies empty. The ice cream window is gone and boarded up as well, but will return. Pat intends to move his postal operations to the front of the store, by the food counter. Residents, who must either drive four miles to the Howard Beach post office or pay a toll to reach the closer Rockaway Beach facility, have been eagerly anticipating the CPU's reopening. (Broad Channel residents presently receive an E-ZPass credit when crossing their bridge, so their payment is reduced to $1.31 each way. Regardless, wouldn't you prefer not to pay a toll in order to buy stamps or pick up a package?)

Here's one final photo—the store as it presently stands. 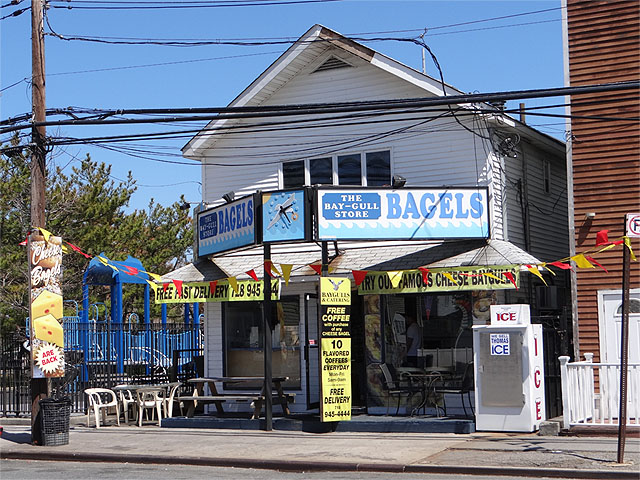