Last summer outgoing mail processing operations were consolidated from the Jack D. Watson Post Office building -- also known as the Fort Worth Main Post Office and Processing and Distribution Center (P&DC) -- to the North Texas P&DC in nearby Coppell (about 18 miles northwest of downtown Dallas).

Here's a photo of the Fort Worth facility: 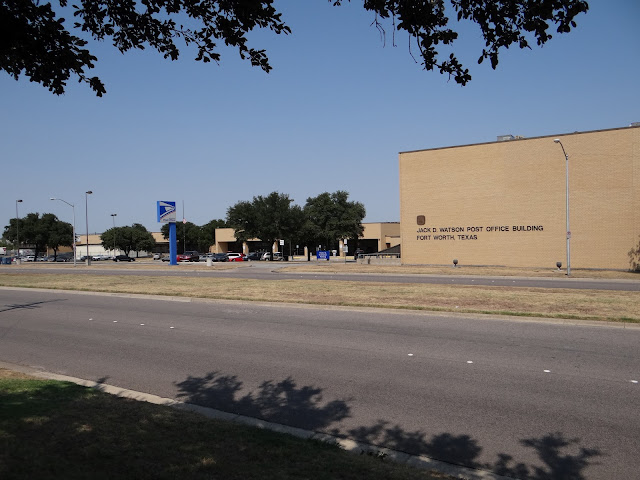 Actually, USPS's plan for originating mail in the Dallas-Fort Worth Metroplex resembled a game of musical chairs among the three P&DCs it had in the area: Dallas, Fort Worth, and North Texas. Here's USPS's explanation from a news release posted last February:

Quote this fine article by Fort Worth's Star-Telegram: "The plant is not shutting down; it is part of an operational plan to shift outgoing mail to Coppell," Bolen said. "If you mail a letter, it will go to Coppell, and if it's local, it will come back to Fort Worth, where it will be sorted and processed."

Here's the front entrance for the building, leading to the retail area: 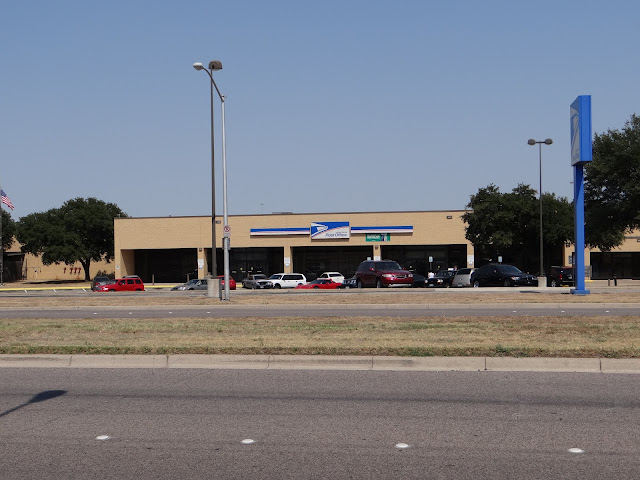 So here's where the nice touch comes in. As revealed in the pictorial postmarks announcement in the Aug. 9, 2012 Postal Bulletin, the Postal Service created a pictorial cancellation in honor of the last day of cancelling operations at the Fort Worth P&DC. That has not happened since I started collecting cancellations from around the country. Since I was in the area at the time, I decided to check it out for myself!

I handed over a couple of stamped items to be cancelled with the device. The staff was also nice enough to also give me an item handed out to Fort Worth plant employees that afternoon: a stamped #10 envelope postmarked with the same cancel. It might not be everything, but it's still a class act. Here's a close-up:

As postmarks go, this was crystal-clear and impeccably applied. The postmark design itself is beautiful, and resembles [at least the northern half of] the Jack Watson building. (Perhaps the building before some additions?) If you compare to the two photos I've provided and the satellite image below, you can definitely see the resemblance.