Alaska's Floating Post Office, and the Town Under One Roof

Hello again! Welcome to Postlandia's fourth installment of Alaskan postal explorations. In case you missed them here are the links to the first three posts in the series:

1. The Last Frontier: Alaska, Anchorage, and Bypass Mail
2. The Halibut Capital of the World
3. The Crooked Runway

This time we conclude our late October explorations from Homer, Alaska. Instead of flying we will be heading to our final village off the road network, Halibut Cove, on the official U.S. mail boat. And like the communities we've visited in our previous posts, there's nothing quite where we've about to go.

TravelAlaska: "There are no roads to Halibut Cove — in fact there are no roads in Halibut Cove — but the community is only [a few] miles across Kachemak Bay from Homer and the famous Homer Spit... Halibut Cove's peak years date back to 1911 when it supported 42 herring salteries and a population of more than 1,000. After the salteries closed, most residents left and today the community is an enclave of artists, craftsmen, commercial fishermen and the operators of one very fine restaurant."

Halibut Cove features just one-to-two dozen permanent residents around its pristine waters, with scenic views of the Kenai Mountains and blocks of boardwalks on stilts to protect everyone from (as we noted back in Seldovia) some of the highest tides in the world. They also have, of course, a post office—a contracted Community Post Office (CPO), to be precise.

Fortunately, of those dozen full-time residents two are named Carl and Tammy Jones. They were gracious enough to answer all my questions, get me on the mail boat out to the town and ferry me back to Homer, all during the tourist off-season. Thank you, Tammy!

Our journey begins at the docks near the end of the four-mile-long Homer Spit (seen from above, below). 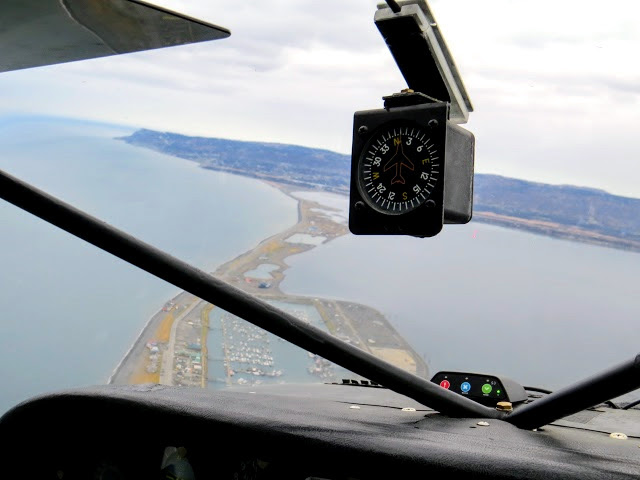 On the ground (water?) our destination of the Stormbird, a former U.S. Army T-boat that carries the mail twice a week to Halibut Cove. During the tourist season she also carries passengers who can "visit the art gallery, hike the scenic trails or beaches watching the wildlife or grab a bite to eat at the Saltry Restaurant." Today though, we're off to see Halibut Cove's floating post office.

Here is the Stormbird docked at the harbor in Homer, and its USPS / mail boat decal. 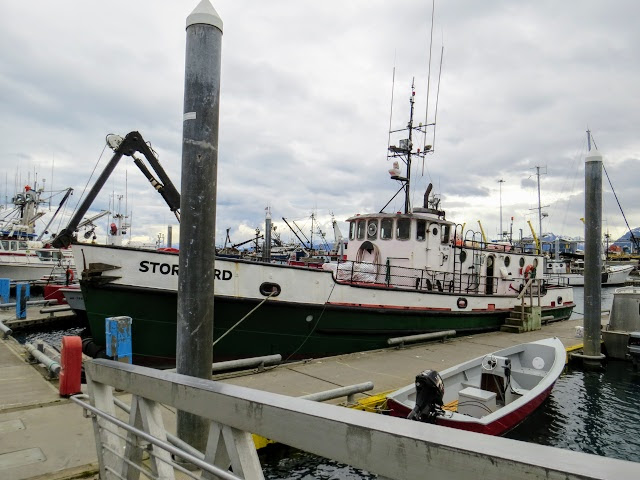 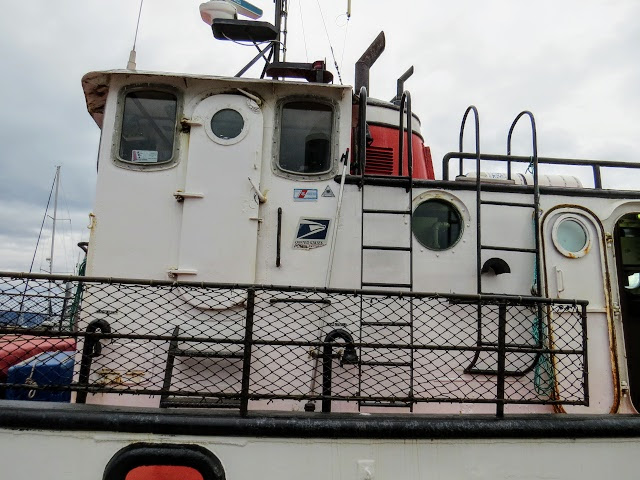 The Kenai Mountains are in the background as we leave the harbor. 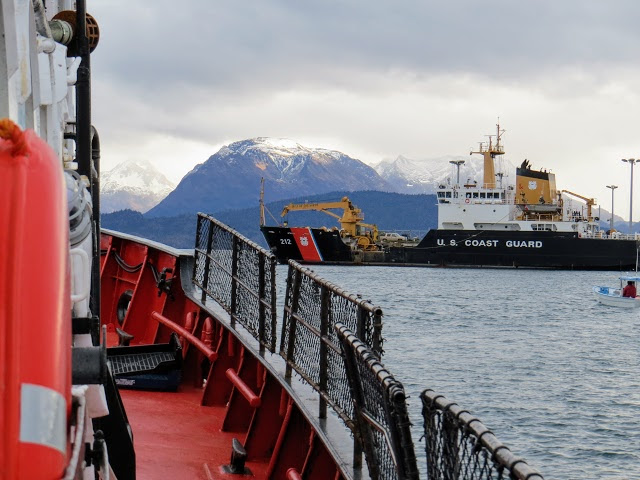 Aboard is a stack of mail and a bag of mail. Mail gets delivered twice a week to Halibut Cove: Tuesday and Saturday. The post office is open those days and only those days. Current operating hours are 9:00am - 10:00am and 3:00pm - 5:00pm. The official "address" of the post office is 6400 Boat Dock Lndg. 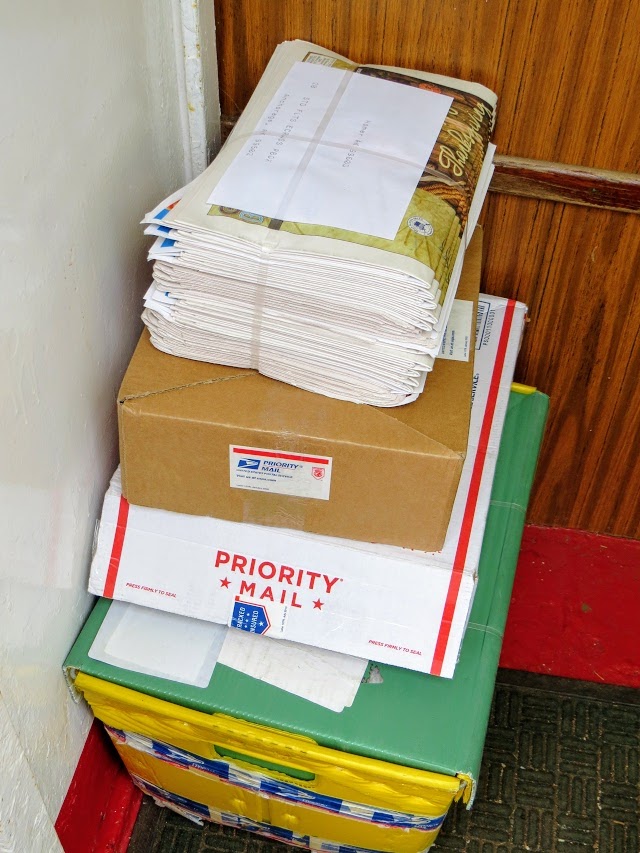 You are welcomed to Halibut Cove by a former lighthouse, now a rental that can be had for a cool $200/night. 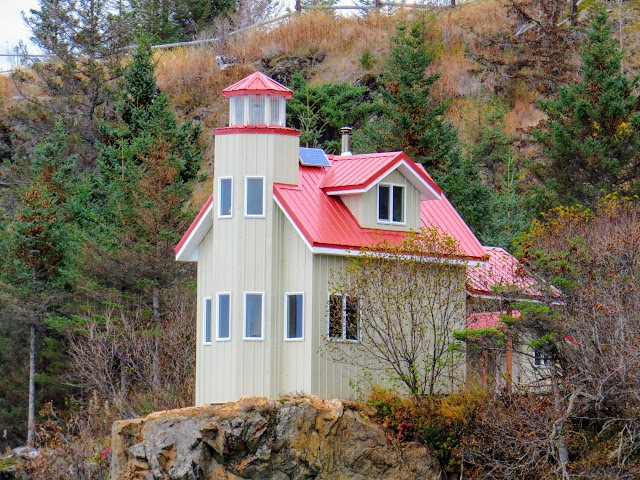 Stormbird is ably captained by skipper Jim, seen here focusing on the task at hand. 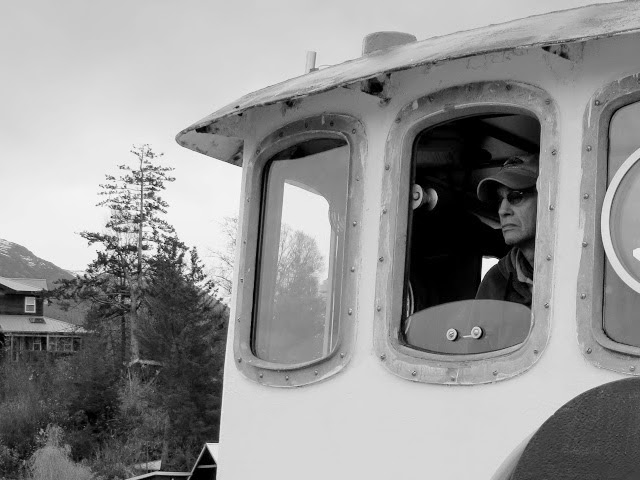 Upon arrival at the dock the mail is carried the few dozen feet to the post office. Halibut Cove is identified by USPS as a No-Office Point (NOP), "a location where there is no Postal Service facility or Postal Service personnel. The NOP community identifies and appoints an individual as the agent responsible for receipt and dispatch of mail." Below, mail is walked to the post office, and contractor ('Postmaster') Kay comes down to greet the mail and open up shop for the afternoon. Behind her is the Halibut Cove Coffee House, a visitor favorite. 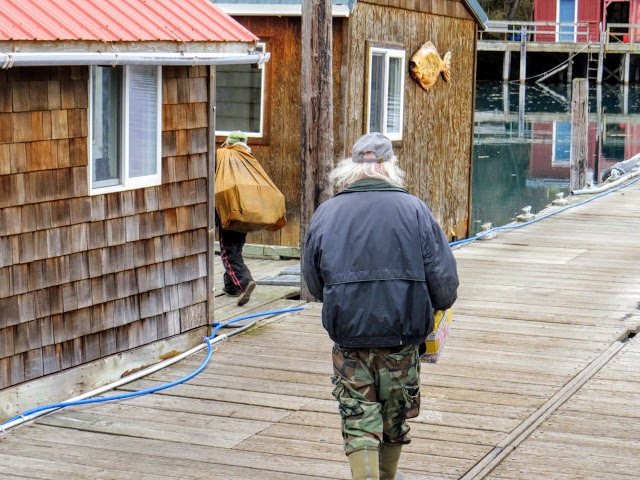 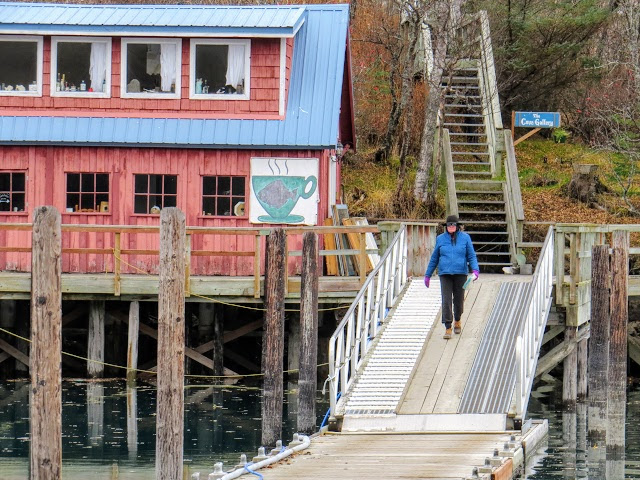 Stormbird handles deliveries beyond official mail as well. Tires were among the products getting delivered this October afternoon. 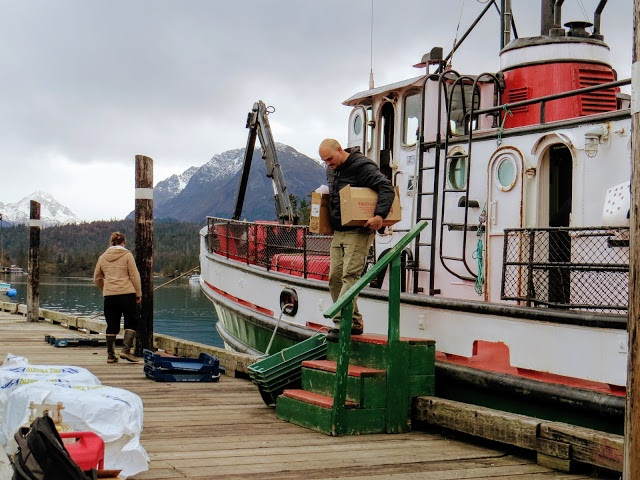 The post office building (along with the entire dock) rises and falls with the tide. Hence it is truly a floating post office. See the pilings? We're actually near high tide at this time. I think it's also interesting to watch just how extreme the tides in this area can be, and how it affects the piers. Watch this time-lapse video from nearby Tutka Bay, from low to high tide: 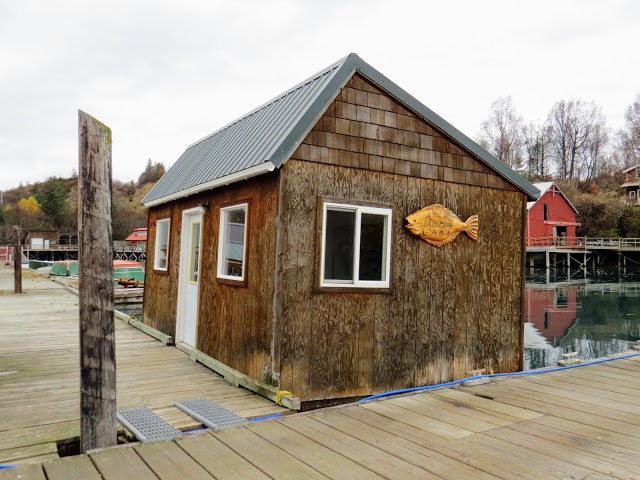 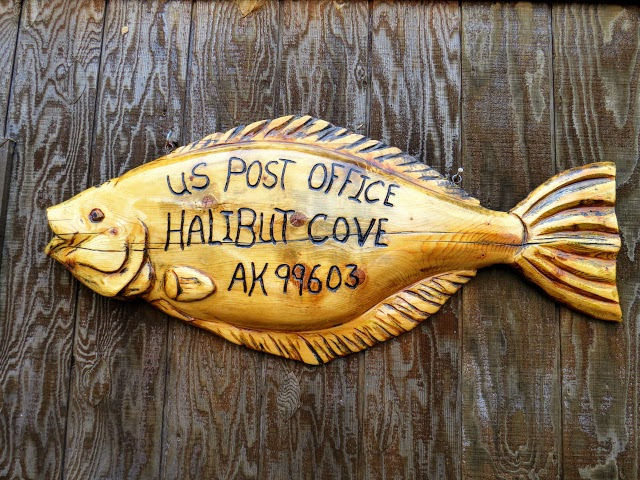 The inside of the post office is not unusual, per se. 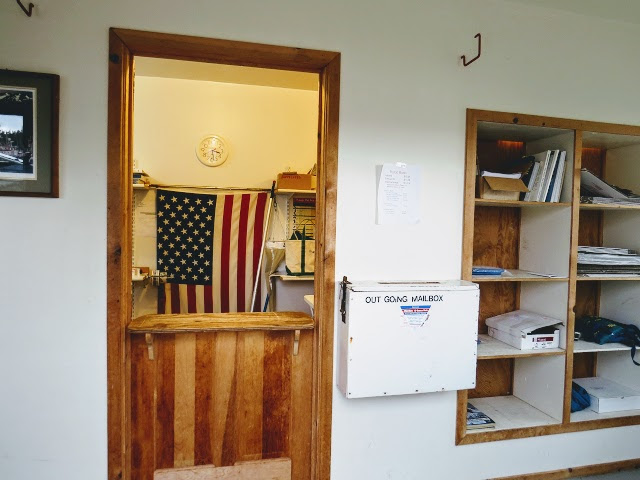 I think it's helpful to provide a broader view of the community. I never made it to high ground, per se, but one person who took a Halibut Cove hike, Panoramio user jeffxx, took this wonderful overview photo. I annotated a small version of it to show the Halibut Cove Community Post Office (CPO) in its larger context. 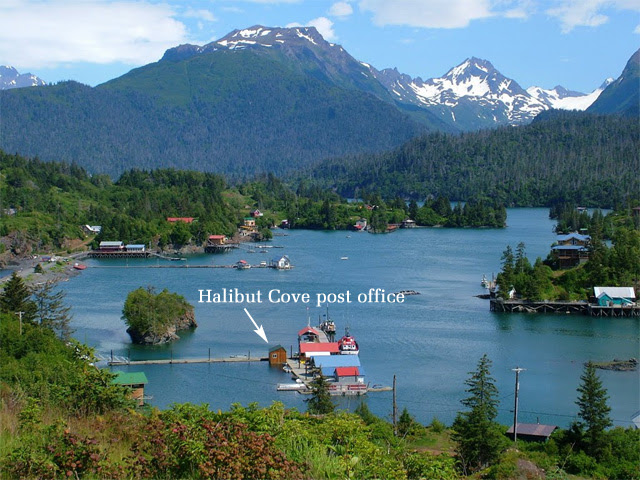 Anyway. I sent a LOT of postcards to my friends from the post office. Thank you, Kay, for putting up with me!

From the post office Carl Jones ferried me on the Bay Roamers Water Taxi to the beautiful Covelight Inn for some much-needed coffee after a long day of flights and ferrying. Bye, floating post office! 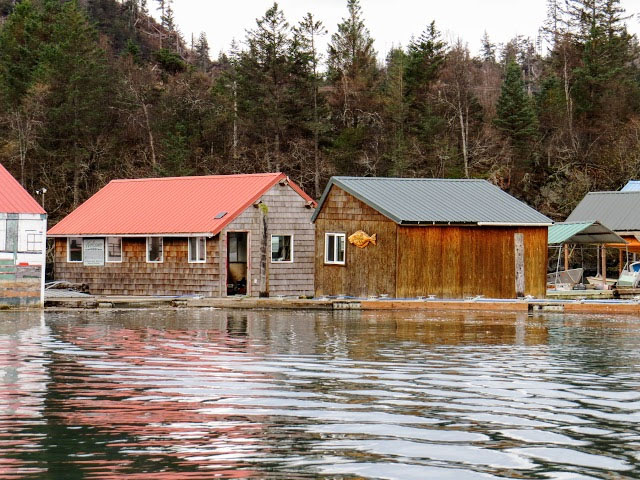 The water taxi ride was pleasant. You'll likely see wildlife during a trip to Halibut Cove. Case in point: welcome back, Otter!

Here's the lovely Covelight Inn. And here I am with Tammy, outside. 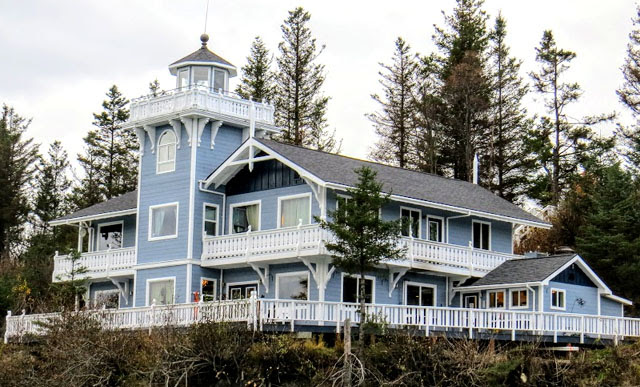 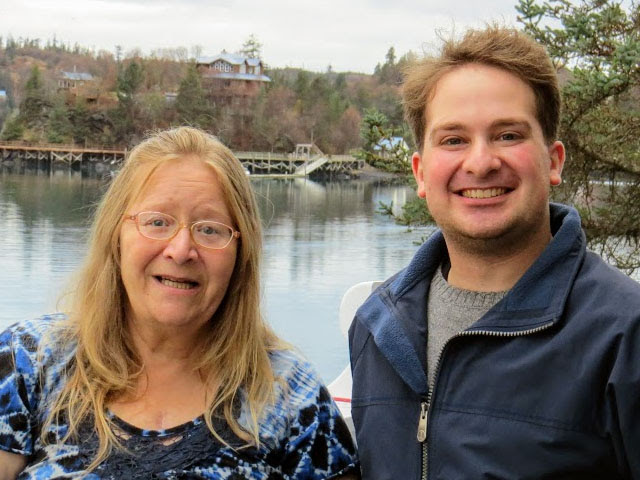 The trip back to Homer was chock full of wildlife, all documented (from very long range) while still in the cove. First was a sighting of Spot, the resident seal. You can even get postcards of him at the post office! Careful if you're a fisherman just back from a run; he might just snatch away some salmon!

(And, gotta love the Internet, here's a video of a cat named Cleo passing by a sleeping Spot, on a kayak.)

Next up, a graceful blue heron. 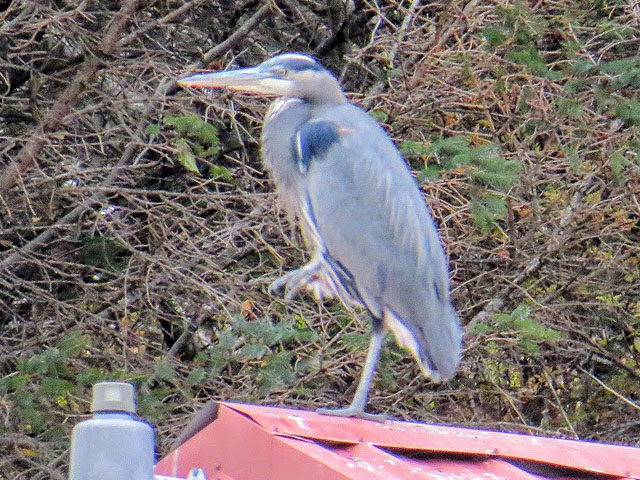 Finally, a couple of bald eagles! 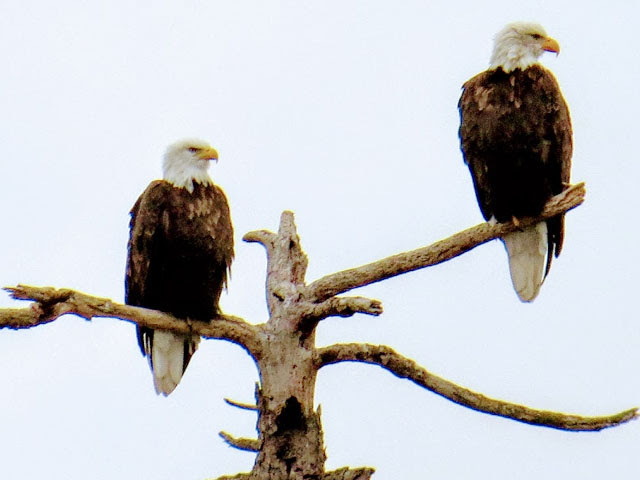 Back on terra firma, here's one final look of the Homer Port and Harbor. 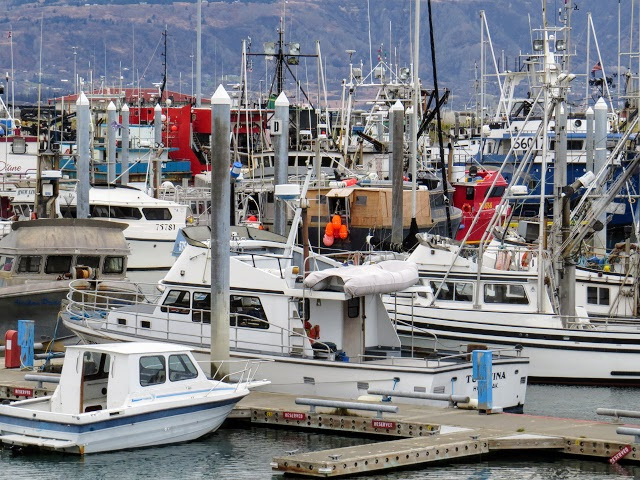 So the flights to Seldovia, Port Graham, and Nanwalek, as well as my trip on the mail boat, occurred in one day. Let's get a drink. The Salty Dawg Saloon is right by the docks and is positively plastered floor to ceiling in (largely signed) dollar bills. Talk about a really cool decor / possible fire hazard! 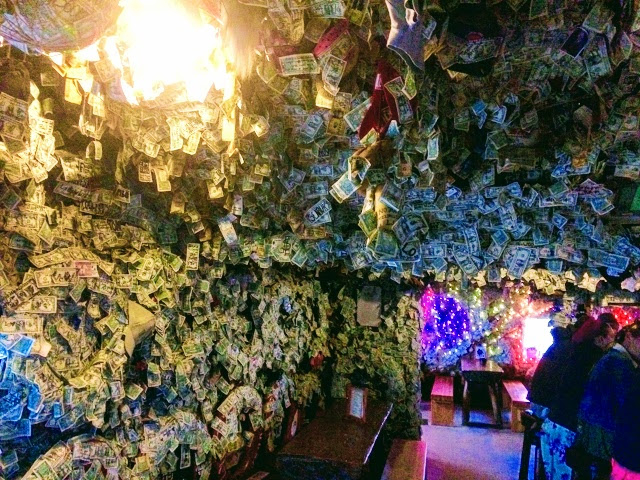 Anyway. Cheers, and thanks for joining me on this Alaskan voyage. 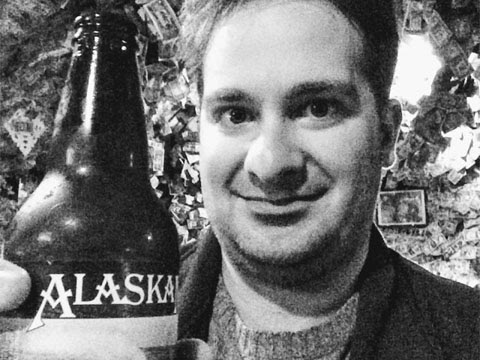 Whittier: The 'Town Under One Roof'

Before we bid adieu to the Last Frontier for now, I thought I'd show you a postal operation south of Anchorage that, while it is on the primary Alaskan road network, makes for a rather unique travel experience. That's because a mountain separates the city of Whittier from Portage, which is on the primary route Alaska 1. The solution? A tunnel, of course. But this isn't just any tunnel. This 2.6-mile tunnel was the longest highway tunnel in North America until it was edged out by upon completion of Boston's Big Dig. What's remarkable about Whittier's Anton Anderson Memorial Tunnel is that it's one lane wide. This means that both vehicular traffic, and even train traffic, travel in the same space. How is this accomplished? Very carefully.

Alaska.org: "The one-lane tunnel must be shared by cars and trains traveling in both directions, and it usually needs to be aired out in between trips (with jet turbine ventilation, another first!). This unique design that enables a single lane of traffic to travel directly over the railroad track saved tens of millions of dollars over the cost of constructing a new tunnel."

The arrangement makes for an interesting visual when driving through. 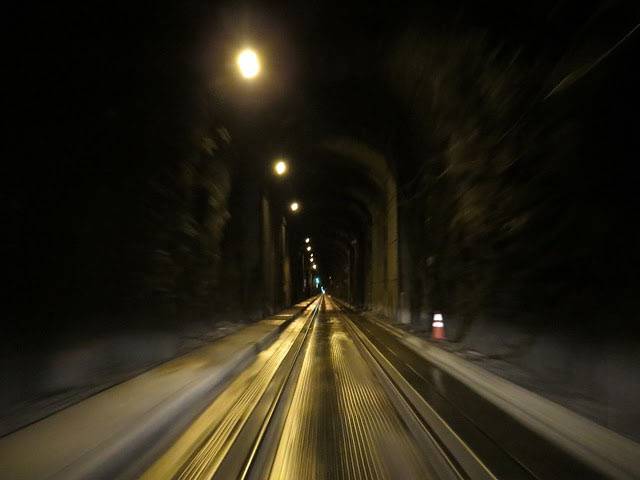 Ah, yes. There's also a toll (collected eastbound), which was $13 for the round trip last year. And don't head to Whittier for the nightlife; the tunnel is closed entirely between 11:00 pm and 5:30 am.

So how is Whittier "under one roof," you ask? Because Whittier is an unusual town. For a community with only 200 residents the landscape is dominated by one surprisingly tall structure: Begich Towers, which houses most of the community's residents as well as the city offices, police department, and (of course) the post office! The contracted Community Post Office (CPO), to be precise. 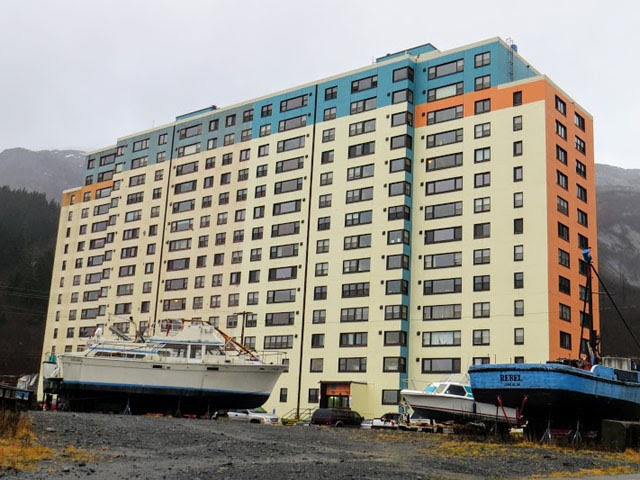 The 14-story building was originally constructed as an army barracks during the 1950s. It was constructed in three phases as three buildings: "east," "middle," and "west". The post office can be found inside the east entrance (at left, above) along Kenai Street. It features a great wooden sign, banks of P.O. Boxes, and an experienced contractor who's got some interesting stories to share. 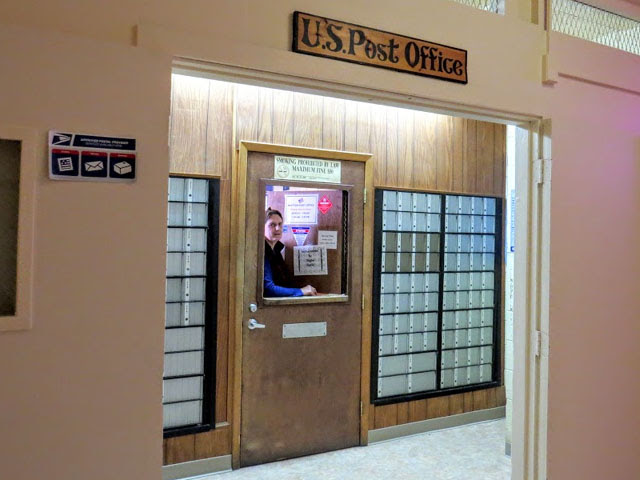 You can see more photos and read more stories from Whittier here.

Hope you enjoyed! That's it for this episode, but don't worry, there are plenty of amazing post offices to be found all over our country. See you next time on Postlandia.
Posted by Evan K. at 5:44 PM