From Plate Blocks to Plain Ol' Plates: Old Post Offices You Can Eat At Now

Over the years I've visited hundreds of former post office locations. A surprising number of them have been converted into restaurants, eateries, and cafés. In 2013 we toured The Old Post Office Restaurant, near the water in Edisto Island, South Carolina. But there are many other instances of this trend at work (and in fact, too many for one post; there will be more to come). Let's review a few finds from recent years.

One additional note before we begin: in our 2012 annual postal summary a recently discontinued post office in Brook Park, Ohio was noted as becoming the Post Office Cafe. That business is since reported closed.

My most recent nudge for this post was a recent visit to Vacaville, California, where the 1937 former New Deal post office now serves as the downtown location for Lyon's Restaurant. According to Yelp the location is under new management and recently renovated as of 2016. 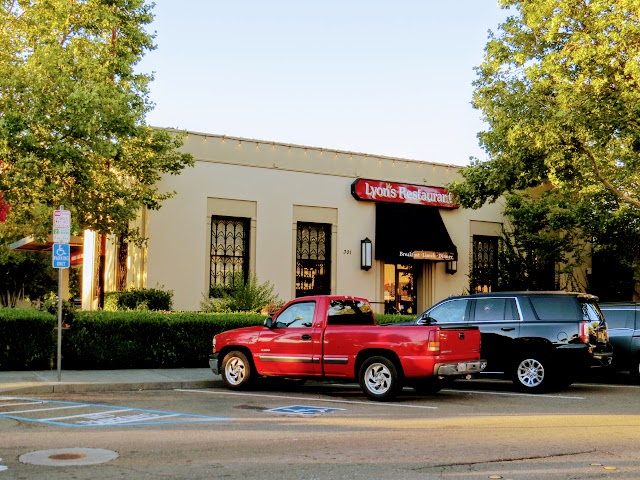 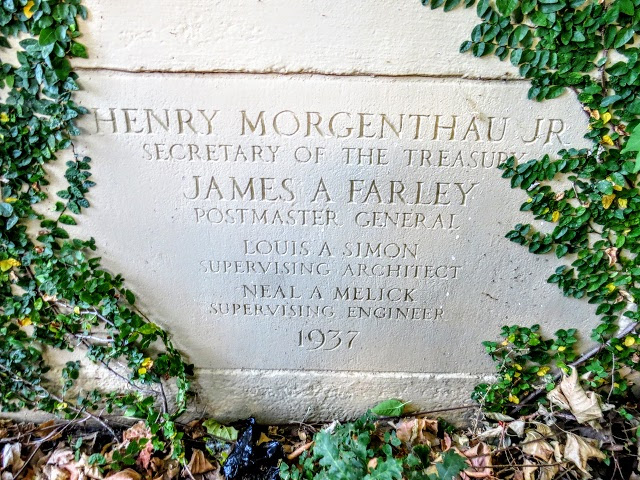 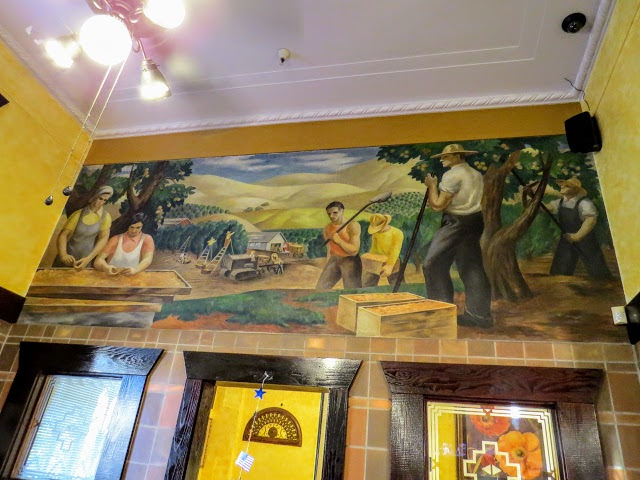 Random postal detail: a bank of P.O. Boxes at the front in the back of the former postal lobby by a waiter work station. 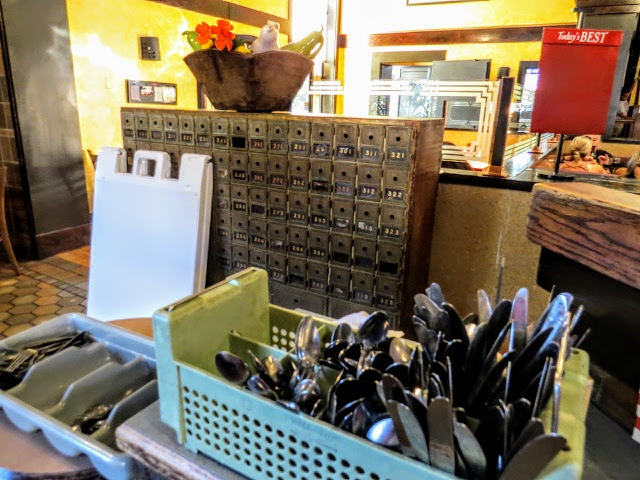 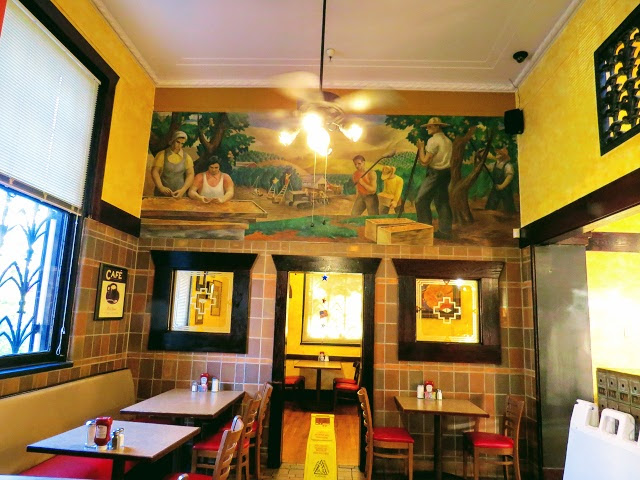 This location I actually have eaten at! Washington, DC's T Street post office was replaced by what is now called 14th Street Station several years back. Discussed in the National Trust for Historic Preservation's Preservation magazine last year:

When co-owners Ann Cashion and John Fulchino signed their lease on the former T Street post office in Washington, D.C., the building had already been reduced to storage space for a secondhand furniture store.

“It was just filled from floor to ceiling with junk,” says Cashion. Influenced by the original facade, she and Fulchino outfitted the interior like an old post office in Mexico or the Caribbean, adding concrete floors and brightly colored tiles.

With “U.S. Post Office” etched into the preserved limestone exterior and mailbox replicas serving as trash and tray stations, the restaurant’s details have lured more than one customer into trying to mail a package or buy stamps. “I think we succeeded in our illusion,” says Cashion.The carnitas taco is a popular choice, and vegetarian options include the refried bean or egg and green chile tacos. 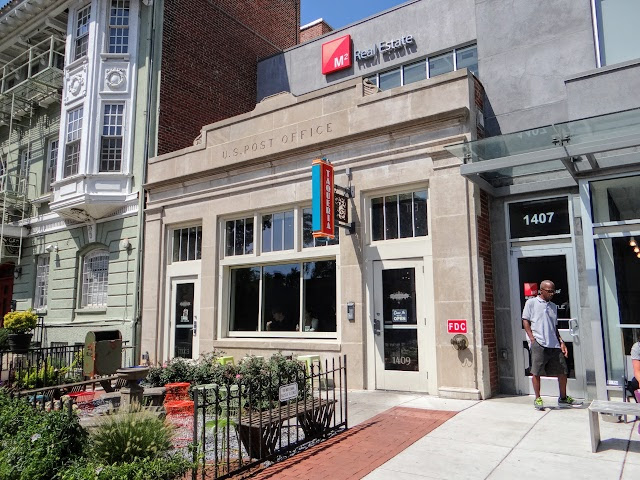 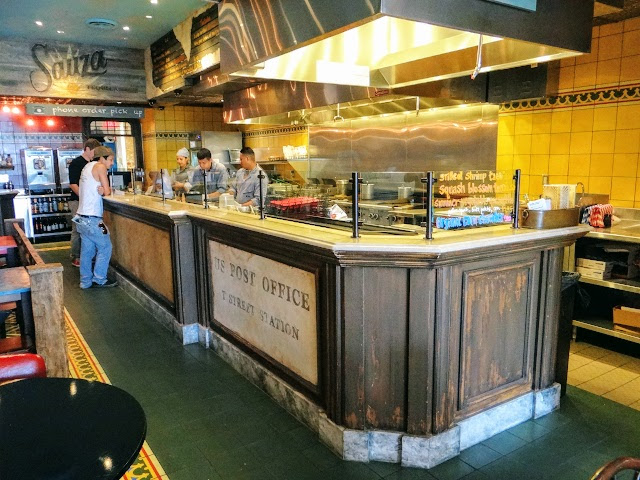 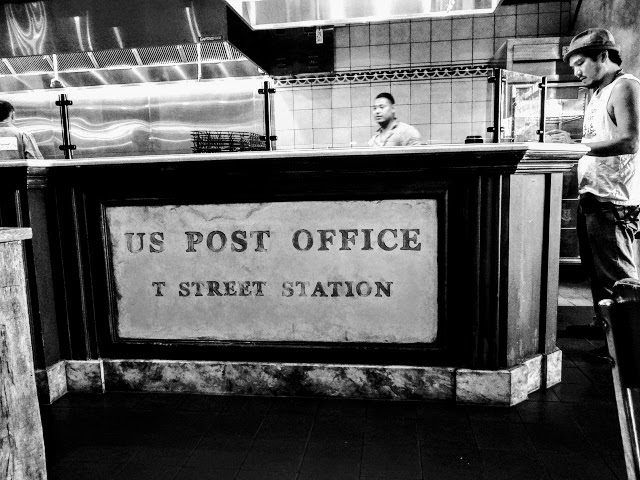 The building is lovely and I did enjoy the food. Three years later I recall that the triangular-cross section yucca fries were distinctive. Here's my taco order: 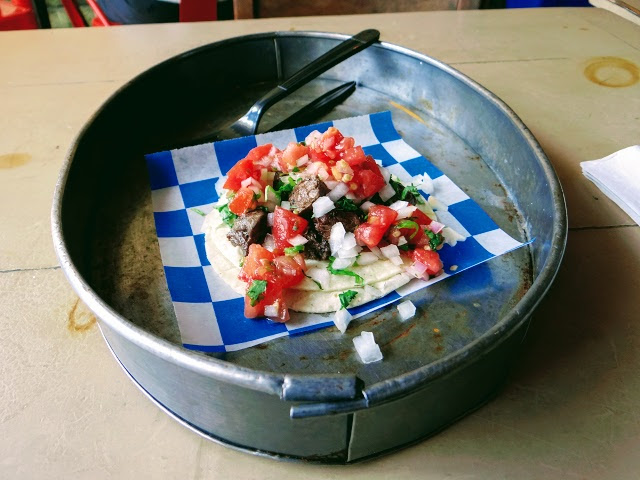 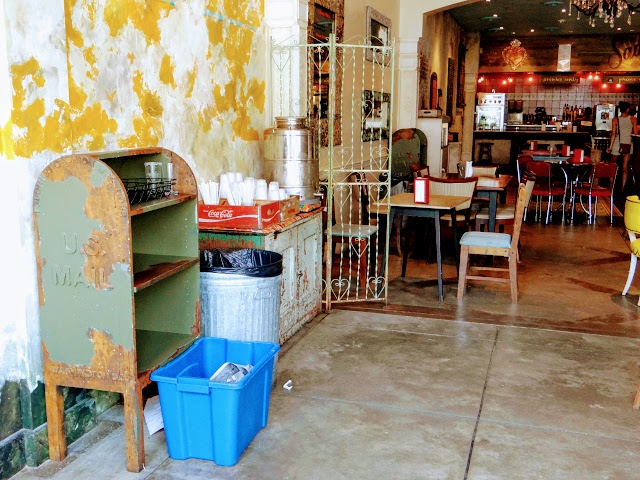 The historic 1911 former main post office in Jonesboro, Arkansas, is long closed but is still stately. The building is now home to a restaurant and catering hall called Sue;'s Kitchen. Their website discusses the family's origin story in great depth, though does not make any reference to the fact that they reside in an old government building. I visited in 2012, though this first image is from the post office's heyday, a 1934 image from the National Archives. 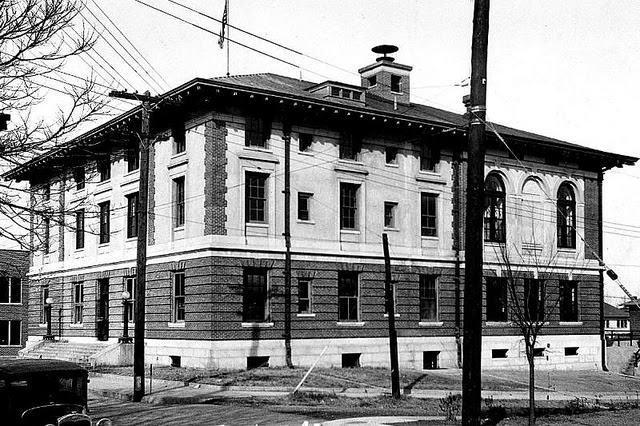 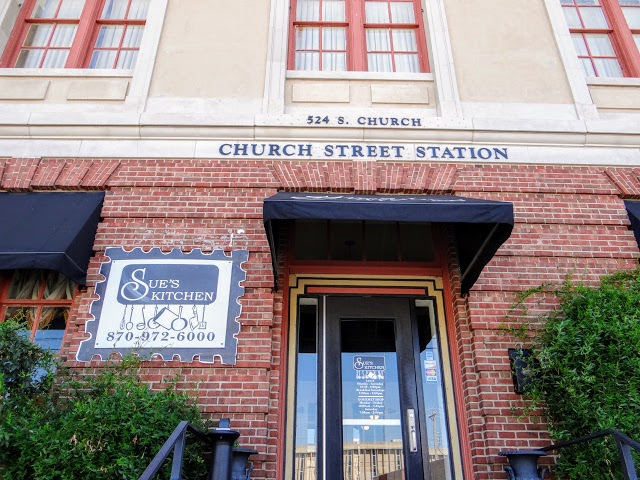 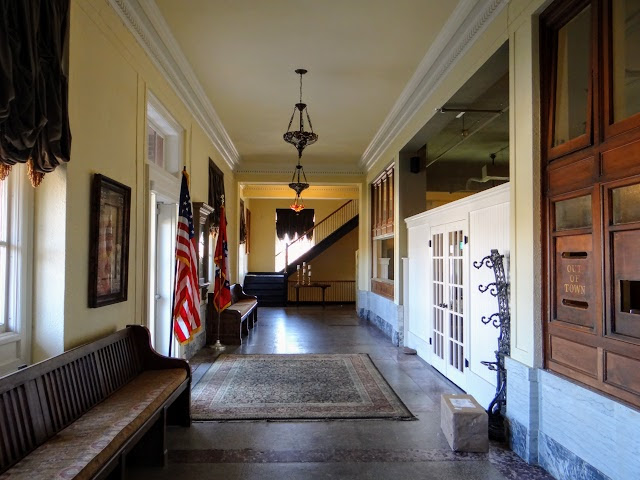 The website Tie Dye Travels acknowledges the building's postal past and reviews the interior in more depth: "The cavernous main floor of the building is mostly open, with dainty tables and large windows. The menu is very much teahouse meets burger joint, with a nice selection of sandwiches, specials and salads. And on Saturday, there's a brunch."

A few months ago we followed up on our 2013 report about the sale of historic post office buildings in Fairfield County, Connecticut. Post 154, a high-end restaurant that opened in the upscale community of Westport had already closed (and been replaced by an interior design showroom). I revisited former Fairfield post office as well, now home to the upscale Plan B Burger Bar.

In Fairfield extensive landscaping and building modifications have been made to the old post office grounds. Compare the below photos of the post office in operation with a new image of Plan B Burger Bar. You can see that a building extension at the left side of the building has been removed, replaced with an outdoor patio. The front handicapped ramp is gone. Fortunately the cornerstone was left visible and intact during the laying of cement old and new. 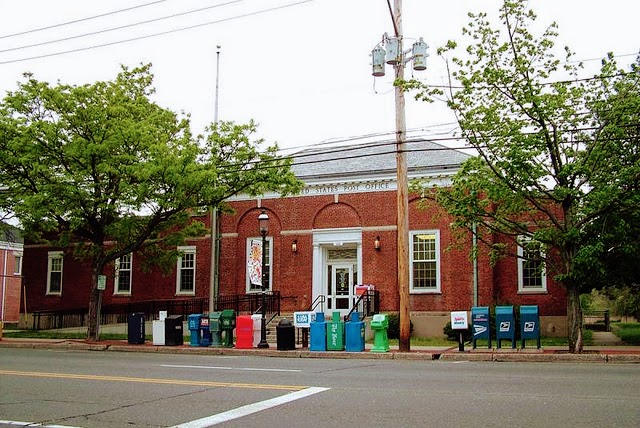 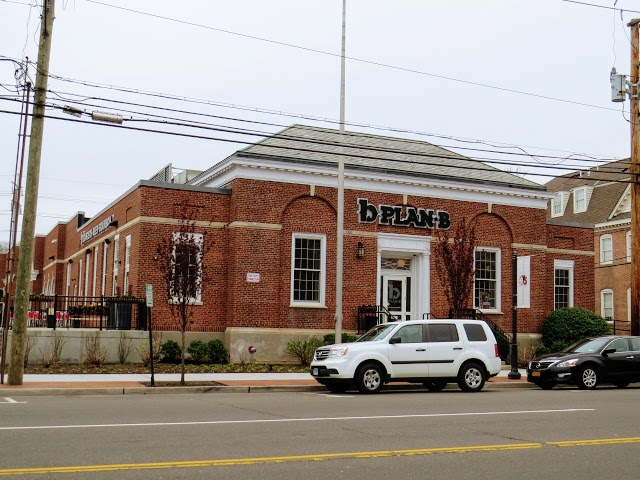 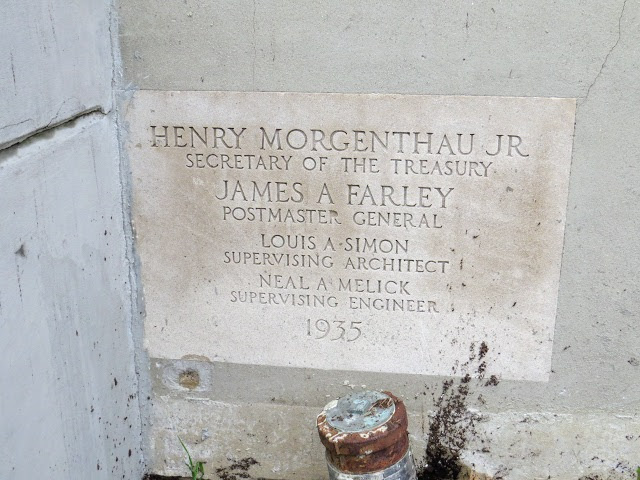 Remember, the New Deal artwork that had been housed in the lobby has since been relocated elsewhere in the community. But here is a photo from inside the Burger Bar for good measure. 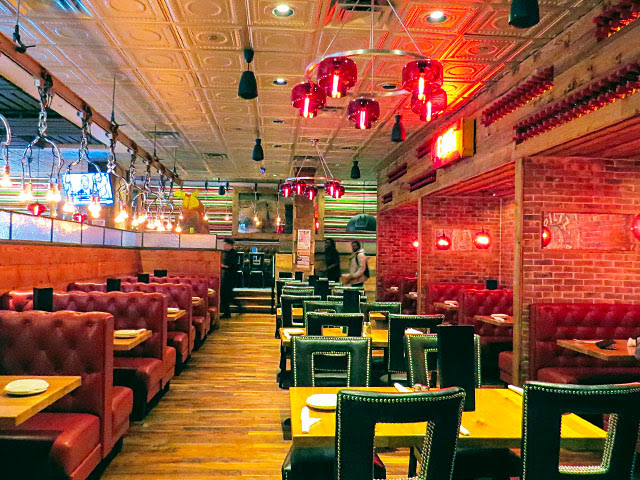