The Flooded Post Office in the Desert: Montello, Nevada

You might be familiar with the years-long drought in California that ended this winter. The wettest winter in more than a century resulted in record snow melt, breaches in dams and emergency spillways (notably Oroville in northern California), the closure of stretches of Highway 1 along the California coast near Big Sur, and the flooding of a post office northwest of Utah's Bonneville Salt Flats, in far northeast Nevada. I first read about an emergency mobile postal unit heading to the high desert back in February, soon after failure of the Twentyone Mile Dam.

Here's Utah station KSL coverage of the damn burst, to give you a sense of the magnitude of the situation.

Waters easily poured the 25 miles southeast to Montello, flooding basements and, according to USPS, "swamping" the post office. Photo here of the post office at the time. No mail was damaged, and USPS sent over a Mobile Unit to maintain operations in the community (as opposed to subjecting residents to a nearly 100-mile-round trip to West Wendover—or '150 miles,' as per a veterans group protesting the potential closure of the Montello post office several years back). The road at the Nevada/Utah border, 11 miles northeast, was also washed out.

Here's a look at the landscape as of the beginning of July, and here is the Montello post office. 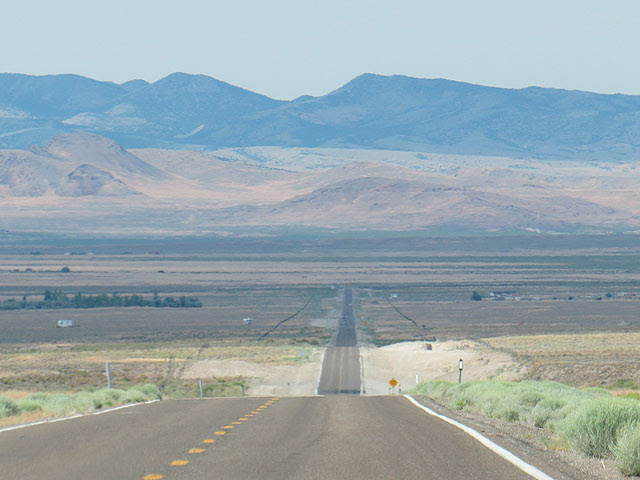 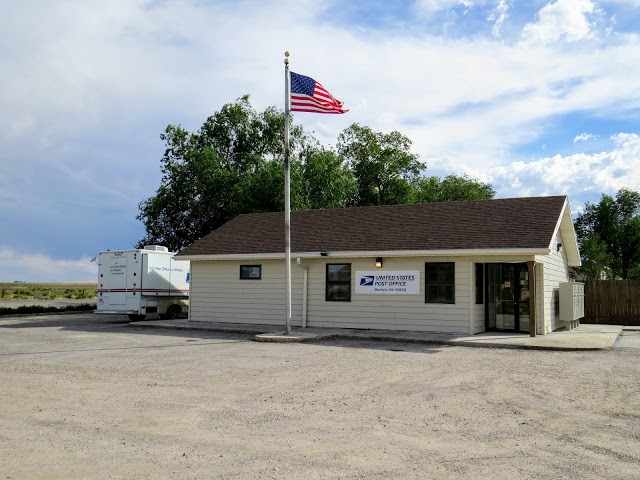 When Postlandia friend John and I arrived in Montello about a month ago the mobile unit was still on the scene, camped out at the south side of the post office building. There was not apparent damage inside the post office; in fact it seemed ready to reopen. The building smelled of fresh paint, and several fixtures, including the windows, seemed newly installed. The standard facility has been in use since 1997 (per dedication plaque). I've been told the building was inspected to ensure there was no structural damage or threat of mold, which led to the suspension of quite a few postal operations over the years. 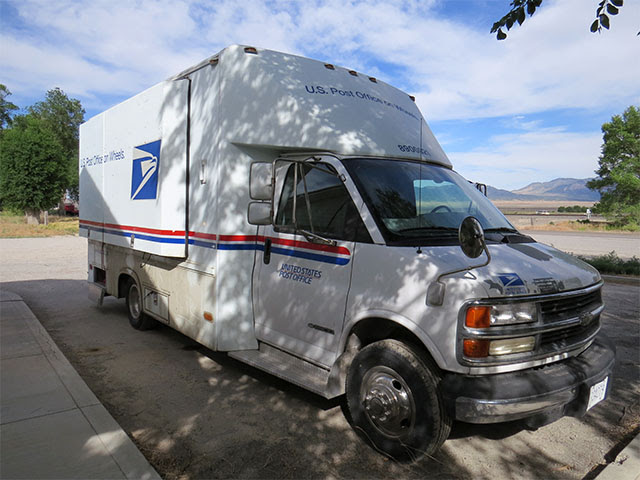 Fresh paint and window repair work at the Montello P.O. 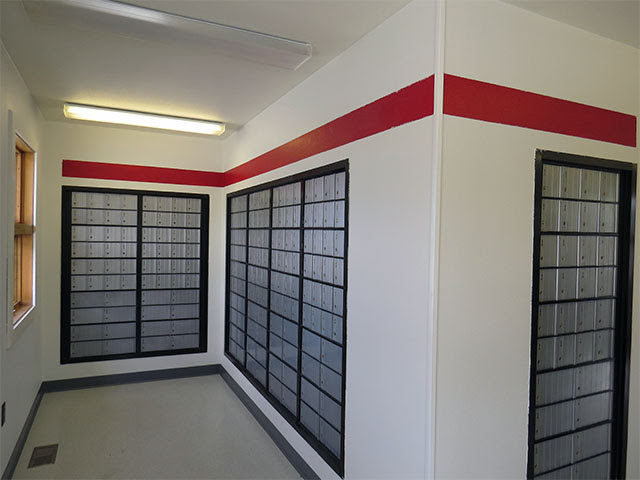 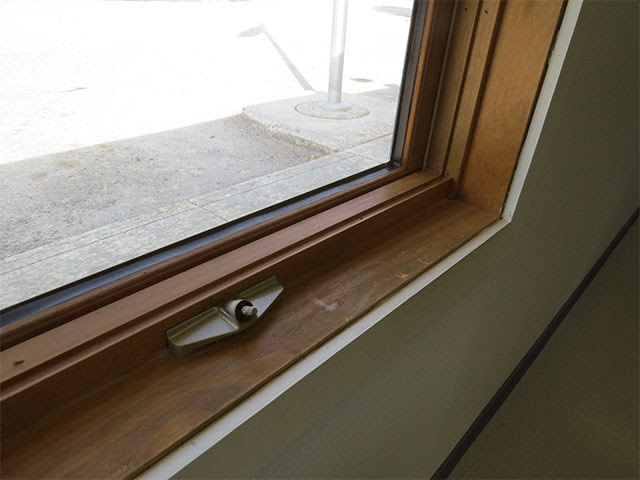 Nice touch: A modest display on the bulletin board shows a couple of photos of the former Montello post office and its former postmasters. It's an all-in-the-family story: Melva Pearson served from July 1950 to October 1976; Ruth Pearson [surname Beatty, as of July 1993] took over until June 1996; then Josephine Pearson served as Postmaster until April 2015.

While preparing this post I looked into the photo topped by the heading Ruralite, a monthly magazine founded by northwestern electric cooperatives in the 1950s. The publication features information "about electrical safety, conservation, and new products or ways of doing things," and issues regional variants. Several editions have featured fantastic vignettes about small-town post offices and Postmasters, including Montello in 1987. Ruralite was kind enough to find the publication in its archives and send it over. Written by Rick and Kristi Steber, the story was written when the Montello post office occupied a false-fronted building on Route 233 between 3rd and 4th Streets. Image from Google Street View, 2008:

The building, possibly built as a cabin for use by the manager of a cattle company and in use as a post office since prior to 1956, was repainted between 1987 and 2008. Once the post office moved out, signage that had read "U.S. POST OFFICE // MONTELLO NEV. // 89830" became "MONTELLO NV", albeit the new iteration retained the font's basic character. 1987 photo (courtesy Ruralite): 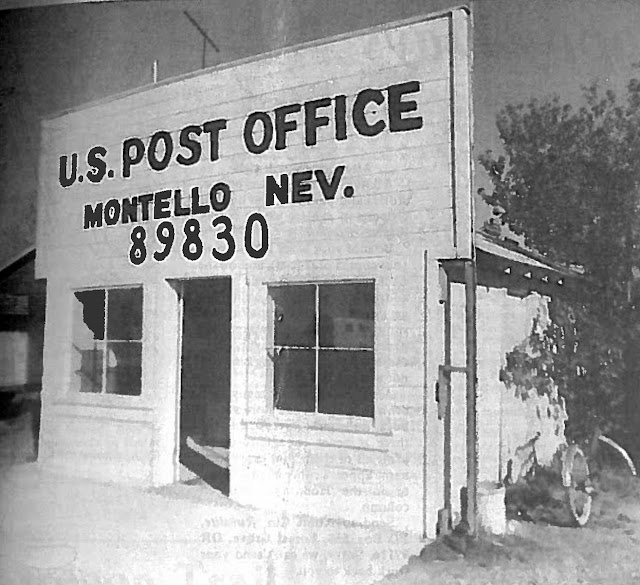 The Ruralite story details a typical day in the life of the Montello post office at the time. Postmaster Ruth would arrive at 7:30 a.m. by bicycle, have her morning smoke and coffee, and sell stamps and money orders until the day's mail was delivered from Wells, Nevada (another town approximately 50 miles away). After delivering the mail to the 100 or so P.O. Boxes the Montello post office serves, Ruth said, "sometime during the day everyone in town will swing by to pickup their mail. It is fun to see people."

Her attitude is one we can all appreciate. "I found out a long time ago if you are friendly people will be friendly to you. It works the same if you are a crab. Most days, I'm smiling." 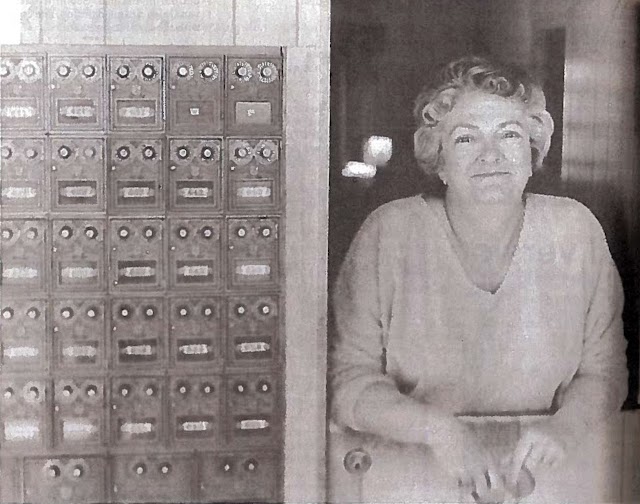 The day wound down, per Ruralite, at the 2:30 mail dispatch. In those days mail would have been processed in Elko, northeast Nevada's largest city (present population 20,000), 100 miles away. Today, Montello's mail travels much further; a few years back Elko mail processing operations were moved to Salt Lake City—a 227-mile drive (further than the distance between New York City and Boston)—as part of USPS's Area Mail Processing initiative.

There are plenty more stories from northern Nevada post offices to tell; see you next time!
Posted by Evan K. at 6:57 PM