Explore Montana with the Man Who's Been to Every Town

In recent entries we explored the development of some of Montana's large post offices. Today we delve a little further. As of last month the Post Mark Collectors Club (PMCC)'s online post office photo collection for Montana is complete! We have a photo from every active post office in the state—and then some.

As of January there are 314 active post offices, one carrier annex, and 27 Contract Postal Units (14 of which are Community Post offices—CPOs) in Montana. At press time we have 481 photos from the state, including images of discontinued operations, former sites, and (as seen with Pendroy below) multiple stages in the visual evolution of a single post office building.

The majority (276) of these photos were taken by Postlandia friend Gary Splittberger, a consulting geologist (think: oil/fracking country) who has worked in and explored much of western oil country. He's also provided more than 80 photos from North Dakota, and more than 20 from Wyoming, Utah, and Arizona. Most importantly for this article's purposes, he has visited each of the post offices in the 147,000 square miles of our fourth largest state. He puts his visit count at 419, when you include discontinued operations and new post office locations: "for instance, I have visited 3 different St. Marie PO buildings over the past 20 years." 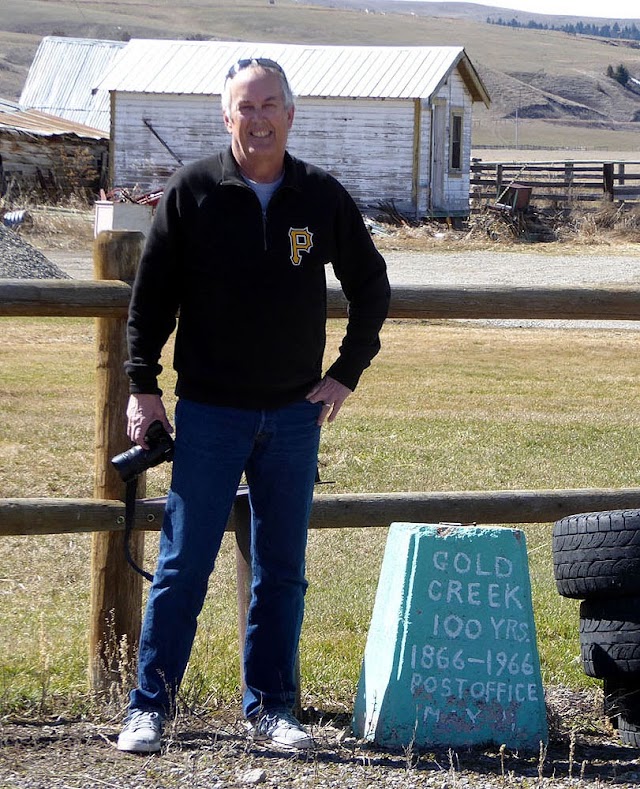 Gary and his SLR at a marker commemorating 100 years of the post office in Gold Creek, Montana.

But that's not all, as Gary keeps on top of developments in Big Sky: "I will soon visit #420, as Bighorn, Montana has a brand new PO building that is about to open (probably August 16)." That photo will surely be posted to the PMCC collection soon.

The Great Falls Tribune covered the end of Gary's 24-plus-year trek around Montana: the post office at Malmstrom Air Force Base outside of Great Falls, a site not accessible to the general public—which makes sense considering it's a nuclear ICBM launch site. For this leg of Gary's travels he was accompanied on post by a veteran, Wayne Olson.

(The PMCC's post office photo collection now includes a photo Gary took of the Malmstrom post office this year, and one our friend John Gallagher took in 1999, when those attending the PMCC's annual convention, that year in Great Falls, were allowed to tour the base and visit the P.O.) 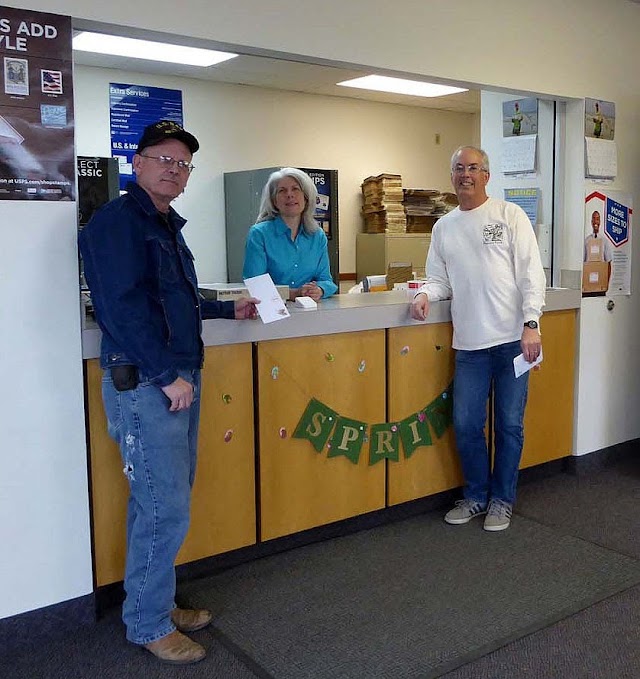 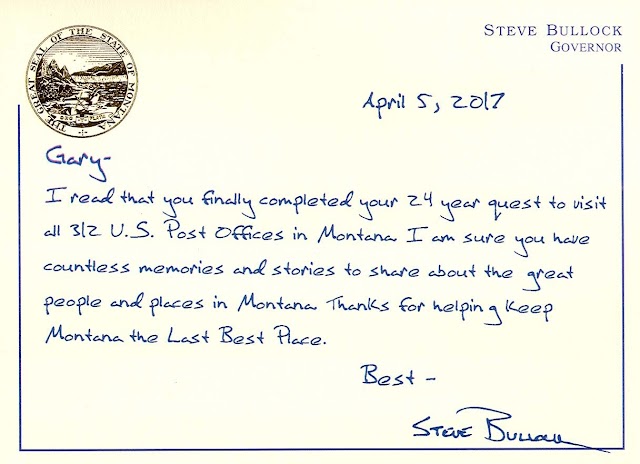 How awesome is that??

Gary didn't start out photographing post offices. At first he collected regional postmarks in "a very casual sort of way." When collecting at the post office in Broadview, Montana (a town comparatively near—only 30 miles from—Billings) in 1993, the Postmaster (presumably, as per Postmaster Finder, Mary L. Baasch) suggested that Gary that it would be really "neat" if he documented the places he visited with photographs in addition to postmarks. And so that branch of the quest began. 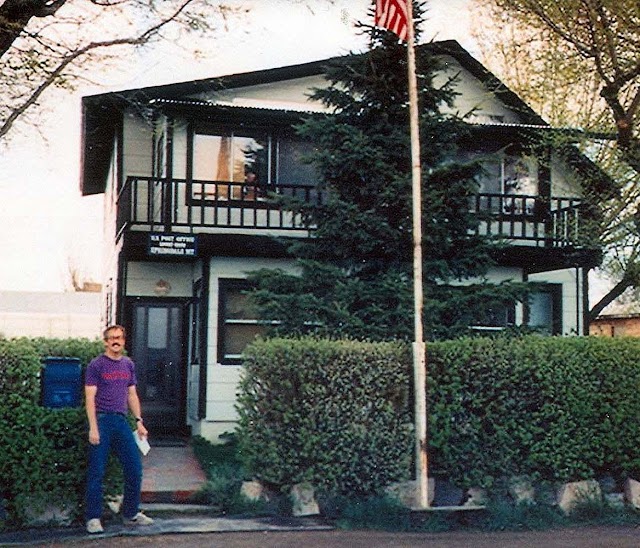 Gary in Springdale, Montana, in 1993. How times and styles change!

Many post offices in Montana are small and remote, such that Montana has 51 Part-Time Post Offices (PTPOs), more than every other state except Alaska. PTPOs are independent post offices which USPS now deems too small to justify a full-time Postmaster's salary; they would ordinarily be assigned to a neighboring postmaster's oversight. PTPOs are far enough (more than 25 miles) from another full-time post office that they instead report directly to their USPS administrative District—in this case the Dakotas District, headquartered hundreds of miles away in Sioux Falls, South Dakota. [USPS's former Big Sky District, which had overseen operations in Montana, was absorbed into the (self-explanatory) Dakotas District several years back, making the Dakotas District among the most geographically broad in the country.] As Gary was quoted in the Tribune, "It’s not that there’s so many [post offices in Montana], it’s just that they’re spread out."

Take a look at Gary's Flickr stream and you'll discover another arm of his collection: postmarks from post offices from an era of Montana long gone. He has postmarks from more than 1,100 Montana post offices in Montana, at least half the total that has ever operated in the state. The Tribune featured a sizable and detailed gallery of some of Gary's collection, much of which has been scanned and posted to his Flickr feed. But there's more, and this is what's really awesome: Gary then goes out and finds the sites of these ghost communities, and shows you what they look like now. What remains could be anything: a cluster of buildings, perhaps decrepit; a dusty crossroads; a railroad track; a ranch; a single sign; or even an empty field, hillside, or stream bank. It's Forrest Gump's box of chocolates spread across tens of thousands of square miles... and condensed into an image feed, conveniently for us. 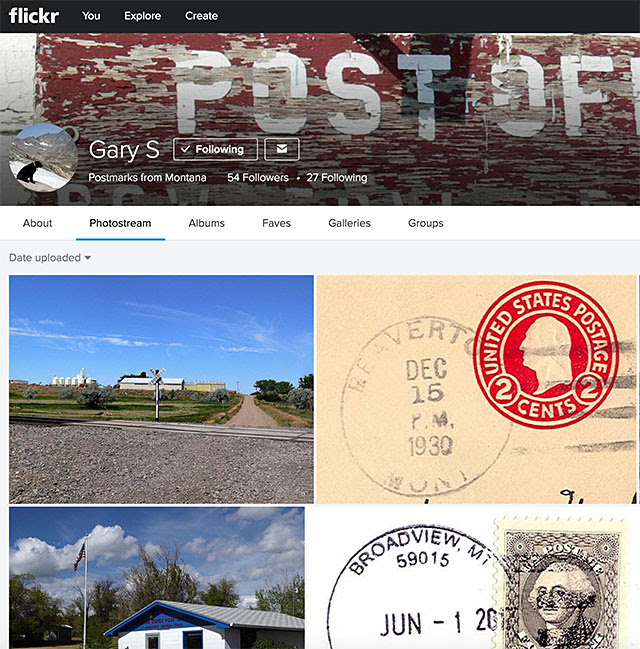 Further still, Gary's feed features descriptions of what had been. Below I've combined two pairs of adjacent images [current photo, old postmark] typical of what you see in the feed. These two are of Brookside and Bald Butte. Here is Gary's caption of the former:


Phillips County. View of the Little Rocky Mountains from the Stage Road, near the last site of Brookside. Brookside was a ranch post office that moved between three different ranches in it's 34-year lifetime. The Brookside post office first opened in 1903 (June 15) on the Coburn Ranch along Beaver Creek, on the northeast side of the Little Rocky Mountains. Robert Coburn served as the first postmaster. In 1916, the post office moved ten miles north to the Graves Ranch with Belle Graves filling the postmaster position. The post office moved again in 1920, one mile further north, to the Daellenbach Ranch. Paul Daellenbach was postmaster until the Brookside post office was closed in 1937 (July 31). On a postcard from 1937, Postmaster Daellenbach wrote a note describing how the area had been "ruined by the drouth and is now deserted". Today, 80 years later, the area is still very lightly populated. 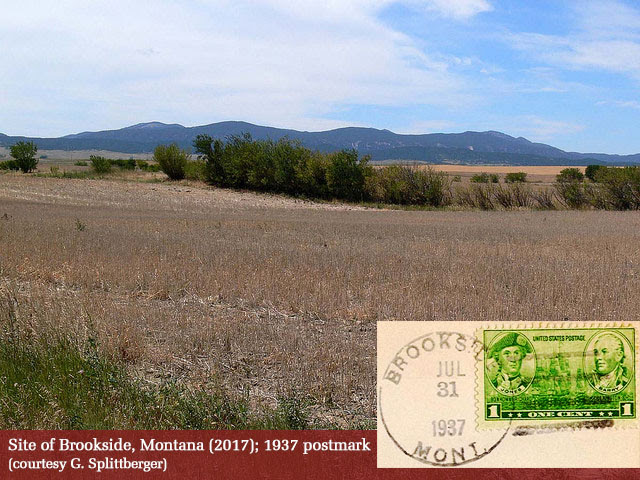 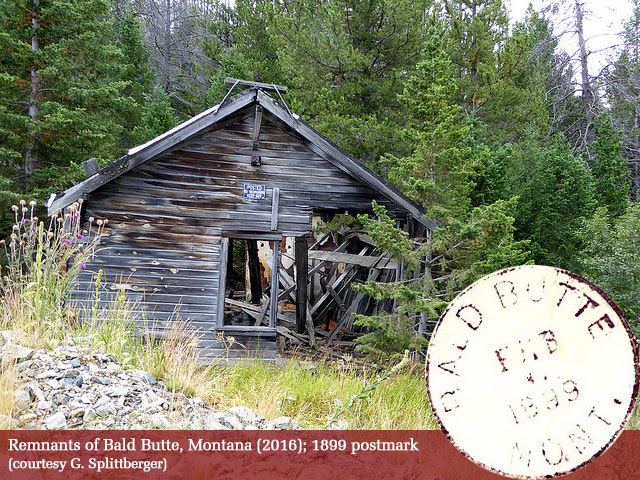 A postmark is, in its own way, a physical embodiment of a place, and Gary's work ties them together to tell their stories. You can see why I enjoy his work.


On Cookie-Cutters and Gems

When I've explored Montana I must confess I've been a bit disappointed. So many of the small-town and remote community post offices that you see in Montana nowadays are cookie-cutter structures with standard blue-and-white USPS signage. I've illustrated this before in this post about Hammond, Montana. Or maybe, if you're in a larger town, you get this standard design—again, no real character distinct to the open West. Examples of these designs below: 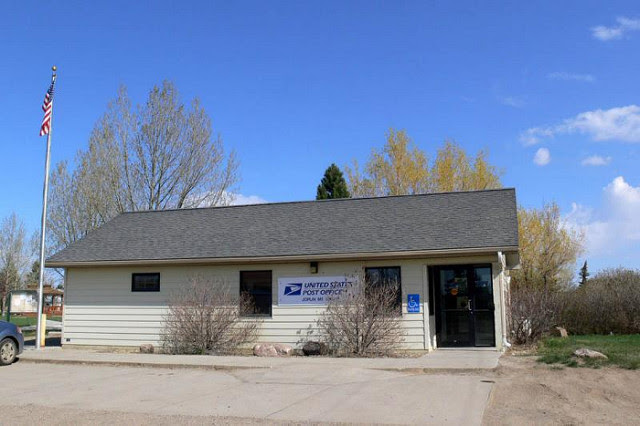 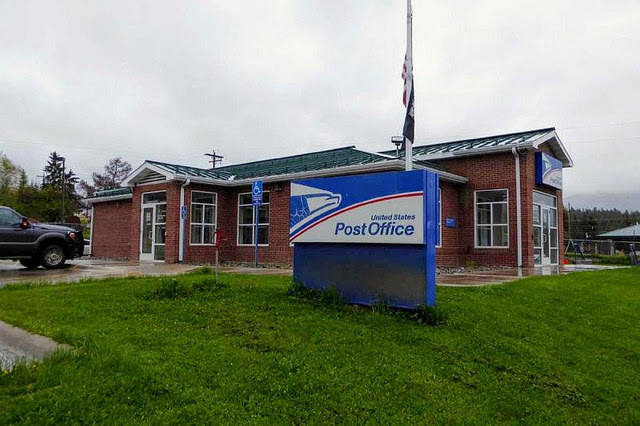 I'd hoped to see more of this: 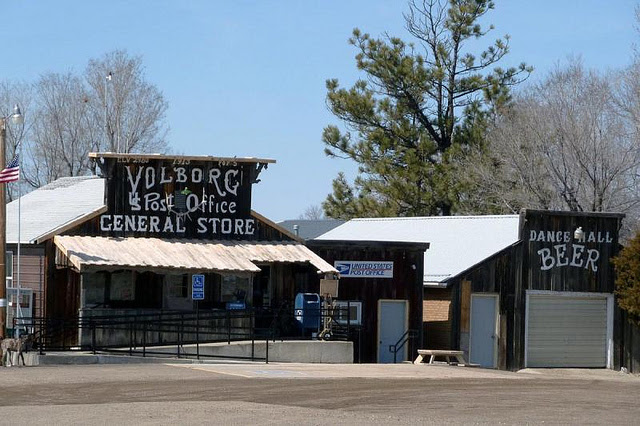 When prompted, Gary provided his thoughts about how things have changes in his 2+ decades of exploration, as well as some of his favorite P.O.s to visit in the state. Verbatim:


You asked about the cookie-cutter Montana post offices. Most of them were built in the 1990's and they they built all across the state so you can find similar PO's from Alzada to Heron and from Turner to Roberts. Not the best for those of us who enjoy photographing post offices, but likely a good thing for the P.O. staff and customers.

I was fortunate in that I was able to visit and photograph many of the earlier PO locations prior to the construction boom of the 90's. There are still a few post offices around the state that retain some "character" and are fun to visit and photograph; Volborg [photo above], Canyon Creek, Ismay [photo below], Silver Star, Polaris, Wyola, and Zortman came to mind right away. The old bank buildings in Flaxville and Fallon are fun to photograph. Yellowtail is kind of unique in that it's the only PO I've ever seen in a laundromat. And, of course, we still have some of the grand old PO's from the early part of the 20th century; Anaconda, Deer Lodge, Dillon, Miles City, Glendive, Livingston, Missoula, and Billings. 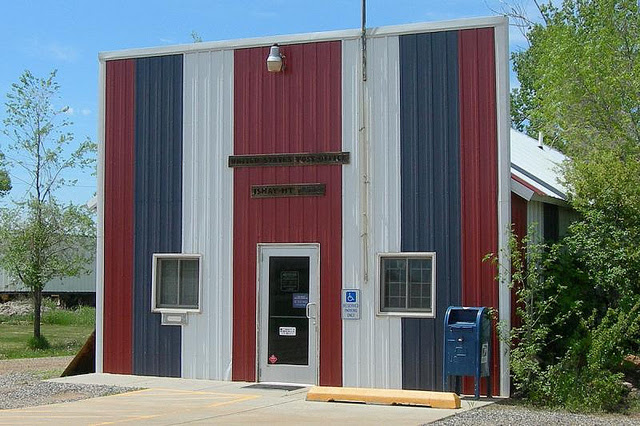 
Unfortunately, some of my favorite PO's to visit have closed in the past few years. Vandalia, Powderville, Polebridge, Haugan, Swan Lake, Lake McDonald, Kinsey, Forestgrove, Creston, and Mosby were all unique places to visit. In fact Vandalia was probably my favorite of all; it was located in an old school building (dated 1912) that was much fun to photograph. For many years Penny Strommen served as postmaster there; now she has an art gallery in the old school house/post office building. And right next door to the old school house, the previous Vandalia P.O. building still stands, with "post office" readable to this day across the front of the building. I've stopped in Vandalia for photos at least 6 times over the years. 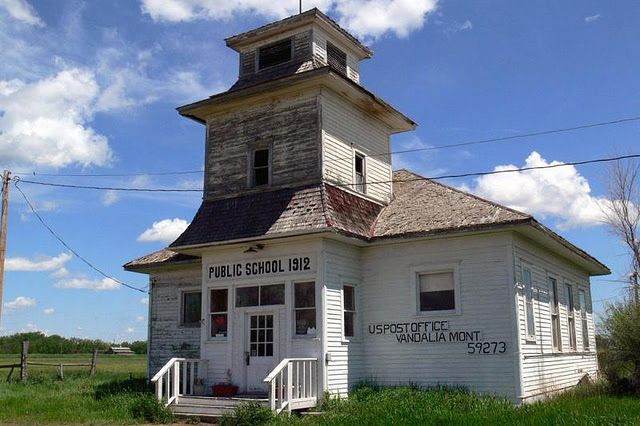 Powderville was also a great place to visit, although not an easy place to visit; it's about 35 miles over dirt and gravel roads to get to the PO building which was a little shack out on the prairie. That little shack served as the post office for at least 50 years before it closed in 2013. 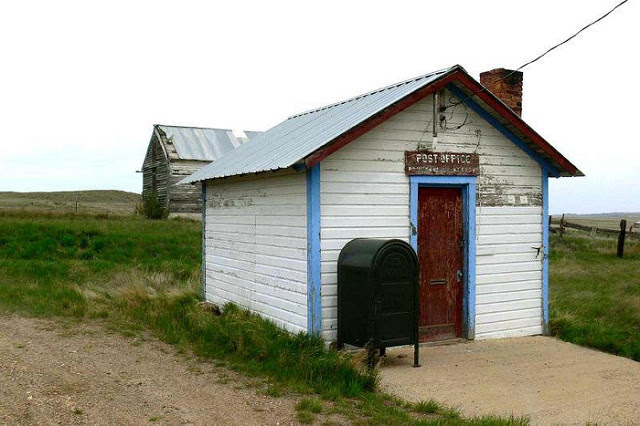 While monotonous standardization might have impacted the visual appeal of many post offices in Montana, Gary concludes, "there are some treasures to be found around the state if you've got the time to search."

Some of this searching takes Gary, and his wife and "fellow backroads traveler," Mary, way off the beaten track—even by Montana standards, to wit: Gateway, "a former port-of-entry along the Kootenai River in NW Montana." Gary: "The Gateway townsite was flooded in the 1970's when the Libby Dam was built, creating Lake Koocanusa." Normally accessible by foot or by boat, "very low lake levels" meant the site was only accessible via a five-mile hike. 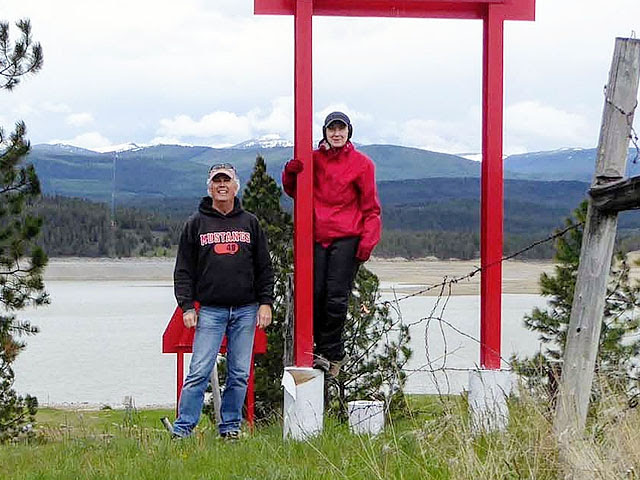 Gary and Mary at Gateway

Other remote sites include Duderanch:


The post office at the OTO Ranch, one of the earliest dude ranches in Montana. It was a summer-seasonal P.O. that closed in 1937. The ranch is owned by the Forest Service now and has been restored to some of its former glory. It is accessible by foot, about a 2-mile hike in the Absaroka Mountains. The main lodge, which I'm standing in front of, was probably the site of the Duderanch P.O. 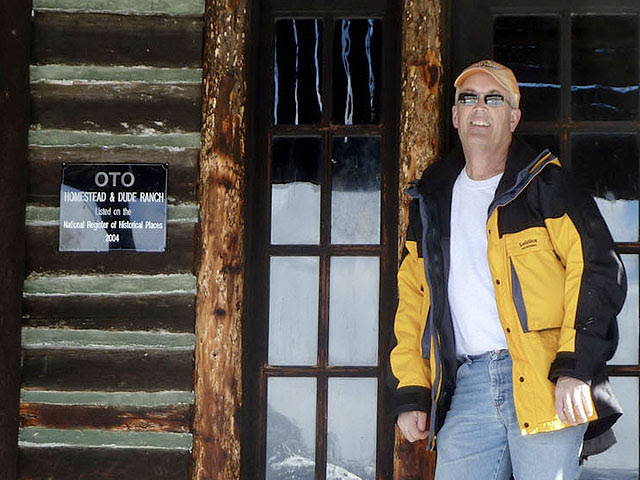 Gary's trips ain't over yet. When asked how much further his adventures might take him, he waxes poetic and practical:

"I'll likely keep driving the back roads looking for these long-gone communities as long as I have gas money and as long as Montana will give me a driver's license!" I sincerely hope you enjoyed this article, the first in what I hope will be a series of articles featuring postal enthusiasts from around the country!
Posted by Evan K. at 2:33 PM