... And the Word from Wyoming

From Lincoln City, Oregon to McClellansville, South Carolina, post offices from—literally—coast to coast commemorated the eclipse of a lifetime last week with limited-time pictorial cancellation stamps for application to letters and postcards. Most of these post offices were in communities that experienced eclipse totality.

Post offices in more than 125 communities have special postmarks that are still available, for the 30 days beginning August 21. Idaho is best represented, with 29 post offices offering the cancellations, every single one of which was in the eclipse's path of totality (100% total eclipse by the moon). Oregon ranks second with 23 post offices, all but one of which experienced totality. (Union, Oregon, according to my sources, experienced a "mere" 99.4% sun coverage.) In Missouri and Wyoming 17 post offices have special cancels available, and Nebraska ranks next with 12. Kentucky, Tennessee, North Carolina, South Carolina, Kansas, and Illinois are also represented among 'totality' post offices. 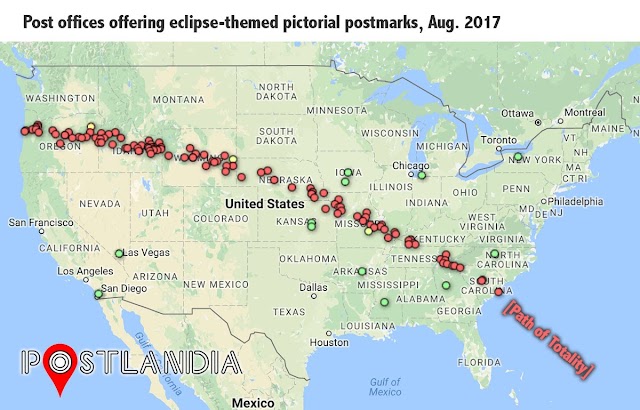 A handful of other post offices, dispersed around the country, experienced the eclipse more modestly but joined in the fun. Of these, a postmark available in San Diego represents the "least eclipsed" post office to make an offering. (To be fair, it is on behalf of a science center.) Among other outliers is Union Pier, Michigan, at 86%, among the closest to the eclipse in the state's far southwestern corner (a mere 283 miles from totality). In Mississippi a postmark representing Stennis Space Center (77%) can be had by mailing to the Postmaster in Jackson (84%). And this time around, what happens in Vegas (71%) doesn't have to stay there; mail your envelopes or postcards to: Postmaster, 1001 East Sunset Road, Las Vegas, NV 89199-9998 for their commemorative cancellation.

The Postal Bulletin from Aug. 17, 2017 provides a list of [nearly all] operations offering the cancellations; link here. It includes instructions for submitting your items for cancellation as well.

About 70 post offices are offering a 'standard' pictorial cancellation of this design:

However, many different designs are available. Some of my favorites include maps, featuring the eclipse's geographic arc, that tie the event more to the place. For example, Dawson Springs, Kentucky; Herculaneum, Missouri; and Stapleton, Nebraska:

[Note: Please excuse the image quality above. The images stem from the Postal Bulletin, which never offers a very good resolution for these.]

The Word from Wyoming

Perhaps my favorite set of cancellations comes from Wyoming, where many participating offices made a special effort to marry the celestial with the terrestrial by including their community's particular location on the planet by way of latitude and longitude coordinates, and time and duration of totality. Simple and to the point, many of these daters resemble a post office's "standard" four-bar cancellation device—literally, as illustrated below, a date stamp with four solid bars sticking out the right side for the purpose of cancelling a stamp. For these special postmarks, the bars are replaced with four lines of text featuring specific eclipse information for the community: the time of totality (in Mountain Daylight Time); the latitude; the longitude; and the duration of totality.

Here is an illustration of four-bar cancellations in regular use, and as interpreted by way of two of these eclipse postmarks, from Lander and Powder River, Wyoming:

Curious as to how this set of designs came to be, I checked in with Corporate Communications for USPS's Western Area and Colorado/Wyoming District, which did a nice job of promoting their impressive assortment of pictorials. Here are stories they posted re: Oregon, Idaho, Nebraska, Wyoming.

They referred me to Antoinett ("Toni") Benthusen, Postmaster of Powder River, Wyoming post office (a PTPO, for those who are into that kind of thing). Powder River, located 40 miles west of Casper, has a population of "approximately 17 (not counting the dogs and cats)." The community is located on U.S. 20/26, one major route for those traveling between the Black Hills of South Dakota and the Yellowstone / Jackson Hole area.

Here is the Powder River post office, photographed in 1997 by Postlandia friend John Gallagher. (We also have another photo, taken last year, by Jimmy Emerson.) 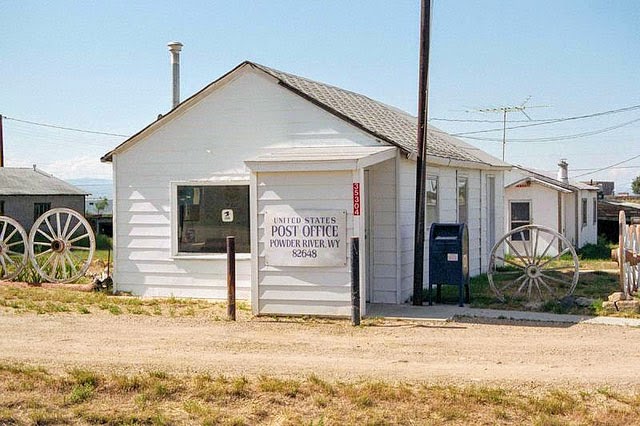 Toni provided some insights into the pictorial design process:

"I got the idea for my design from Julie Greer, Postmaster of Upton, WY. She suggested using the four-bar dater and replacing them with the Coordinates for Powder River..." Coordinates and other eclipse information came from eclipse2017.org.

One step in the pictorial creation process is copyright management, by way of artist's release: "When I went to fill out the paperwork there was an Artist Release form which either I needed to fill out as the Artist, or have the person who created the artwork fill it out. So, I called Julie and asked her if she would sign the form as the Artist. She said no, that I was the Artist; she only gave me the idea and then I ran with it, making me the Artist. WOW was I blown away, me an Artist?! I couldn't believe it!!!!!"

At this point "other offices (7 in all) started calling me and asking if they could use my design." And they needed help by a bona fide artist. "Would I help them with the paperwork since I had already done mine, and gotten approval to use the design for my stamp? I was so honored that they wanted to use my design and that" Corporate Communications specialist "David Rupert thought enough of it to use on a release." [See links, above.] "He then asked me to create a flyer with all the [participating] offices in Wyoming, and their addresses," for distribution to their customers. Here's a snippet from the flyer featuring several of the unique designs representing the state:


[W]e sat just a few feet north of the center of the path of totality. This gave us a crystal clear view of the Eclipse, and what a spectacular event it was! The 20 or so people who chose to park off the edge of the highway were ecstatic about their choice! Immediately after the event a lady from Italy, who is currently living in California, came in to mail a backpack full of extra things she didn’t want to haul along on her trip. When she saw that I was selling the Eclipse Stamps and sleeves and doing the Special Cancellation she went outside and spread the word to everyone out there who all came in and bought me out of sheets of stamps and sleeves, and then bought envelopes to collect and send. I did 160 special cancellations that one day, which for my office is Huge!

I have since restocked my office with Eclipse stamps and sleeves so anyone interested can still purchase them from me or any other offices who still have them in stock. And it’s not too late to get the special cancellation postmark until September 21, 2017. Just send your cards and/or envelopes bearing First-Class postage stamps inside another larger self-addressed stamped envelope to any Post Office who are doing the special postmark.

I was very impressed by how calm and nice everyone was during the days before and after the event! ... The business people in Casper and Riverton interviewed on TV said ... they were very pleased with the amount of customers they had. So...

THANK YOU EVERYONE FOR MAKING THIS ONE OF THE FONDEST MEMORIES IN MY LIFE!

Finally, here are three photos from the day in Powder River, courtesy Postmaster Toni: getting ready for the big day, with glasses and special shirt for the occasion; viewers in from out of town, in front of the distinctively Wyoming cowboy-signed post office; and an image of the eclipse in progress, through a pinhole projected against the blue collection box. 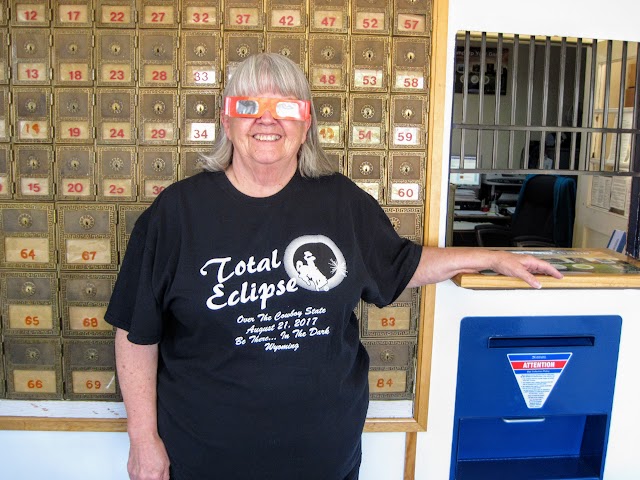 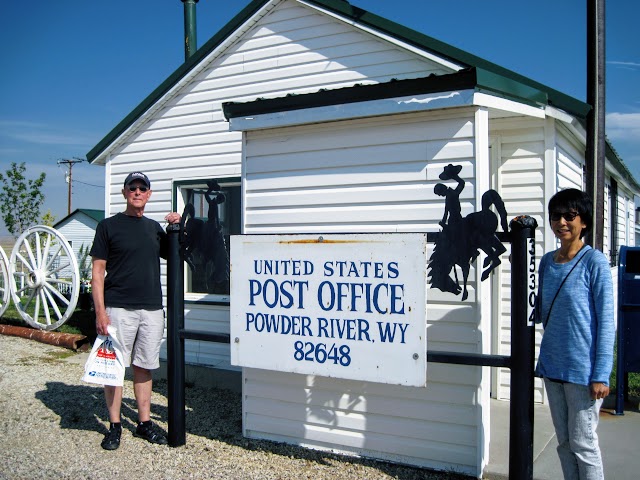