I was a little struck by this USPS Local News announcement published a couple of months back: Freehold Lafayette Postal Trailer will be closing. Set to close next Friday, July 29, I had to head down to Jersey to check it out.

Fortunately, the author had to head from New York to Philadelphia earlier this week to check out some apartments, and so had an excuse to spend a couple of days racking up more New Jersey post office visits. I learned a lot and got a couple of fantastic stories, some of which will be set forth in future GP entries.

Freehold is a township of nearly 35,000. I first visited its main post office, pictured below. Its architecture was relatively interesting, considering its blandness. It's located in a large shopping area west of the center of town. The office had many clerk stations, but only two were open. Neither clerk knew philatelic regulations and she who I had to deal with had a notable and condescending attitude. Fortunately, the supervisor approved a standard postmark request and I was on my way to check out the postal trailer. 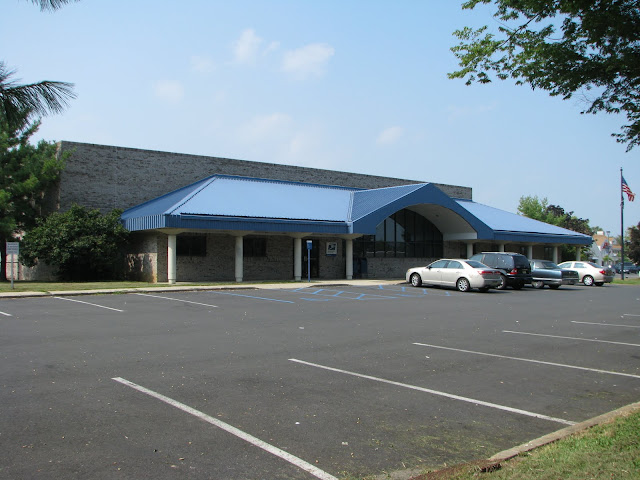 The postal trailer is where a main post office should be: in the center of town. Unfortunately, the trip from this location to what will be the only Freehold post office requires crossing two major north-south arteries and makes for an obnoxiously long commute, considering it's "only" a 2.4-mile drive. I didn't quite know what to expect, but it's literally a large trailer, specially made for USPS, plopped in the middle of a parking lot. Interesting.

There are two ramps along either long side of the trailer -- one for employees and one for patrons and box-holders. Banners hung on those sides stated: "Freehold Boro Temporary Post Office" and "Welcome to the Temporary Post Office in Freehold Boro". The front states the hours of operations: M-F 8:30 to 4:30; Sat. 9:00 to 1:00. Here's the USPS listing.

That temporary operation, Lafayette Station (as it's located at 13 Lafayette Street), has been in place for 8 years. Previously, downtown Freehold postal operations were handled by a CPU (date of closure unknown to the Post Mark Collectors Club). I think a new CPU would be apt for this location, but who knows? Let's get to photos already! 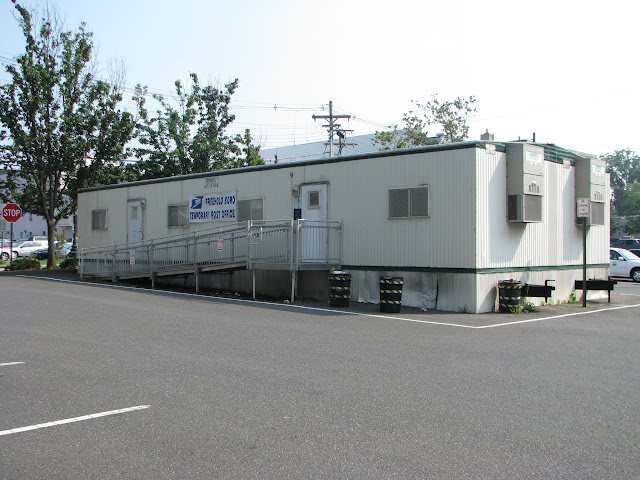 Inside, the experience was more pleasant than Freehold Main: the clerk was friendly and readily gave me a postmark. The dater used at the trailer is identical to the one used at the Main Post Office, so it wasn't so exciting; still, it's something. The trailer is a full-fledged post office: There are hundreds of PO Boxes and two window stations operating the standard USPS POS (Point of Sale) computer retail system. I was curious how the hard-wired machines were set up, so I bought $1 of stamps to get a receipt, which states "Freehold Downtown Station".

As in most instances, I find this closure to be disappointing. Three teenagers had just walked over to buy $60 of stamps for their mother, and there were two other people using the office while I was at the facility.
Posted by Evan K. at 12:14 PM