Taste of Salem, OR

So, before I headed off to Hawai'i for two weeks back last March, I visited a friend at Willamette College in Salem, OR and revisited Portland. Driving to Portland was also good prep for renting a car.

Salem I toured one day by bus, visiting all of its stations east of the Willamette River, all of its CPUs, and its DCU. I finished off its branches and West Salem Station while visiting 24 post offices in one day, mostly in the Portland area. So, let's see what we've got: 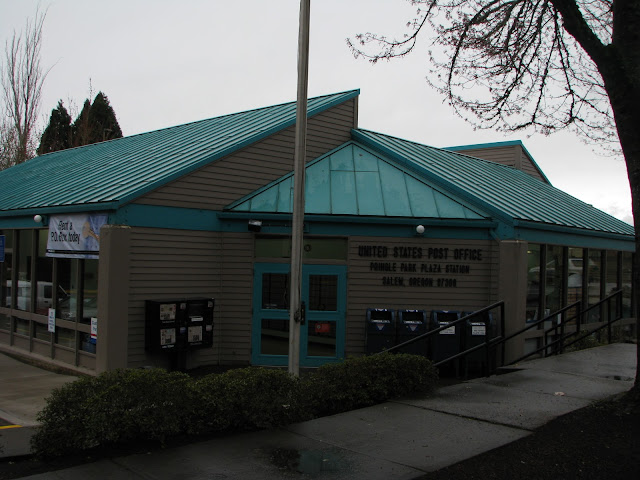 It was raining the day I set out in Salem. First I visited the Pringle Park Plaza Station, which had, interesting enough, a postmark that said "Pringle Park Station" and "Pringle Plaza Station". That's the post office nearest Willamette College and the Oregon State Capital (a really cool building).

In the drizzle I set off on bus #1 to the Liberty Ave. Station. I got out and caught the same bus on its return run 10 minutes later, transferring to another line to get to the Vista Station. Another bus over to the Salem MPO, where I met a friendly woman (the former philatelic clerk) who offered to mail me back my card with the Postmaster's autograph for my collection.

Now off to the eastern Salem CPUs: Southeast Station, which I got to by walking and got some photos nearby of crews working on power lines; and the Oak Park Station (the subject of another post), next to the Oak Park Lockbox [P.O. Box] Unit, which I got to using yet another bus. The Oak Park CPU had seen another collector six months prior to myself, whom I can only assume is another member of the PMCC.

I then walked two miles to the Hollywood DCU [Detached Carrier Unit], which does indeed have its own cancel. On the way I chatted with a crew that was installing a red light camera system. They explained to me that not only does the camera take photos of your car entering and exiting the intersection from the back, but it also does so from the front, along with video cameras that monitor the driver and speed of the vehicle. There are no excuses when this thing catches you. A ticket in Beaverton, OR could cost $400, and could also entail a moving violation -- two of which negate your license.

Another bus later and I was getting drenched near the Hollywood Station, so I went in and got a sandwich at a newly decorated Subway. The clouds had not left, but diffuse afternoon light enabled some nice photography of the Oregon State Capitol and Salem's flowering cherry trees.

Like I've always said, good things and interesting adventures happen when you Go Postal.
Posted by Evan K. at 4:53 PM