Ah, Providence. Imagine: I spent four years at Brown University and didn't even consider photographing every post office within 50 miles! That changed somewhat one day last summer as I was heading back from Boston to New York.

Any postal tour of Providence must begin with the Main Post Office, whose retail operations share a building with the Providence P&DC, carriers for a few ZIP codes, and formerly the Southeast New England District offices (whose operations were removed and divided among Greater Boston and Connecticut Valley last spring as part of USPS's cost-cutting measures).

The Providence MPO was featured on a four-cent 1960 postage stamp, celebrating the fact that it was the nation's first automated post office in the U.S., as part of a project known as Turnkey.

You can read all about the then-$16 million post office and stamp at The National Postal Museum and Trains on U.S. Stamps. 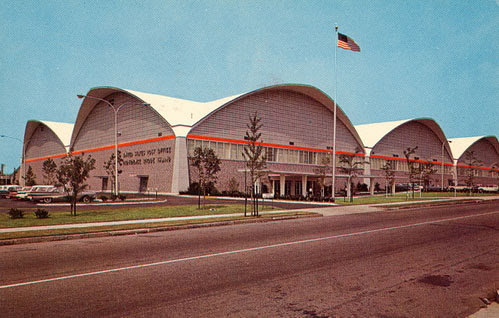 By now the flora has filled in, making scenes tougher to capture. Here's the front customer entrance: 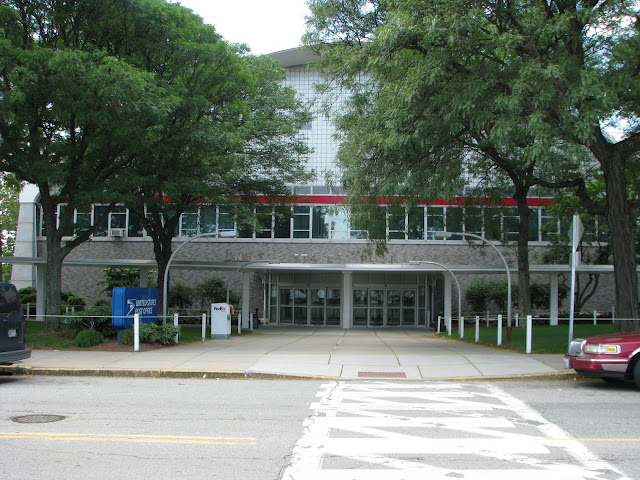 In college I did use a post office all the time, and it wasn't the official Brown University Station: it was the East Side Station on the main commercial row, Thayer Street. Believe it or not, I chose my upperclassmen year residence partly due to proximity to the post office. (Back then I sold used books; my busiest day resulted in three full trips to the post office.) The clerks were great and had character. Here's a photo: 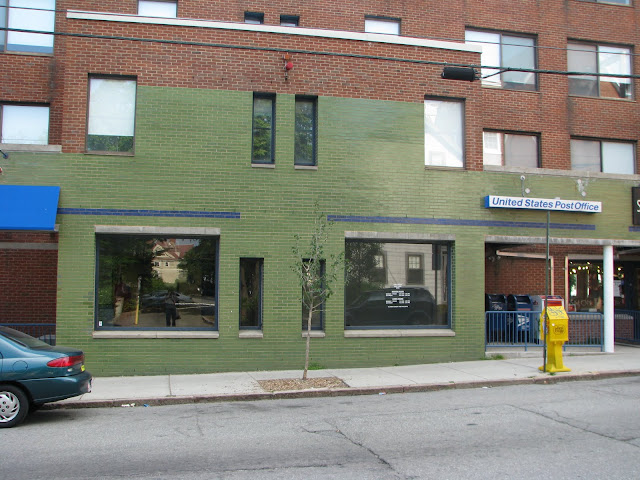 The Brown University Station was discontinued in 2008, when adjacent university mail operations were transferred from historic Faunce House to Walter Hall across the street. Here's a photo of the exterior of the former site. 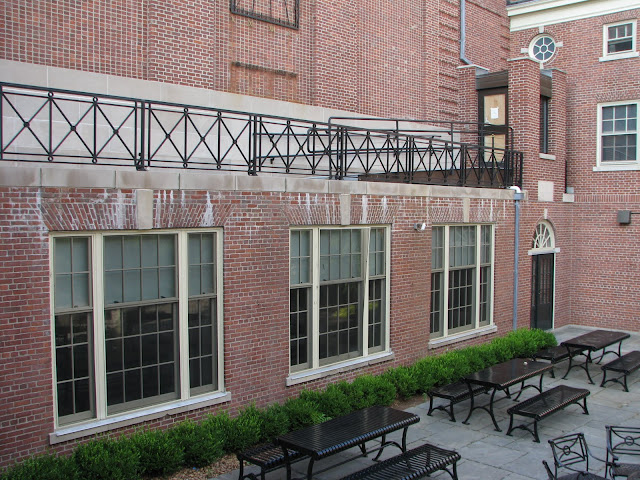 Normally I would say that closing a campus post office is a bad idea. In this case, the East Side Station is rather close to the campus PO site that the effect on the community might not be significant -- although the discontinued site is closer to the administrative buildings on campus.

Providence's Friar Station is a classified unit located above the mailroom on the Providence College campus is being considered for discontinuance under RAOI; in this instance it would be a bad idea to close the office. Students who live on campus and who don't have a vehicle would have to walk a mile to the nearest facility: North Station (which is also being considered for discontinuance -- another poor idea), or find their way under a highway to the industrial-area Providence MPO. Neither comes across as a particularly reasonable alternative, especially if you want to build a relationship with your supposed future generation of customers.

Friar Station closes for the summer. Here's a photo: 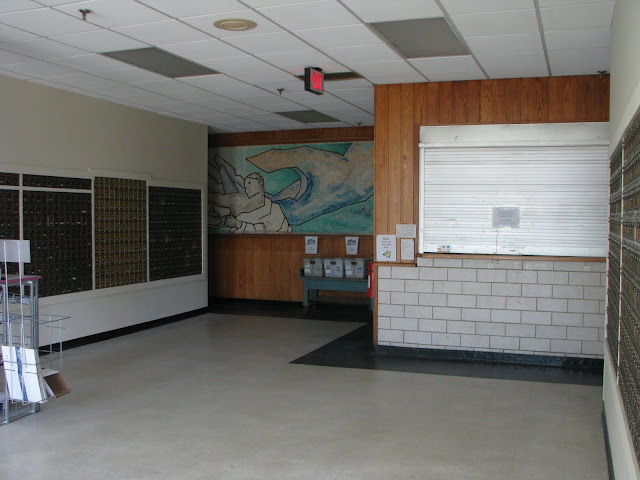 The stately North Station post office. Note the gorgeous integration of the signage into the building: 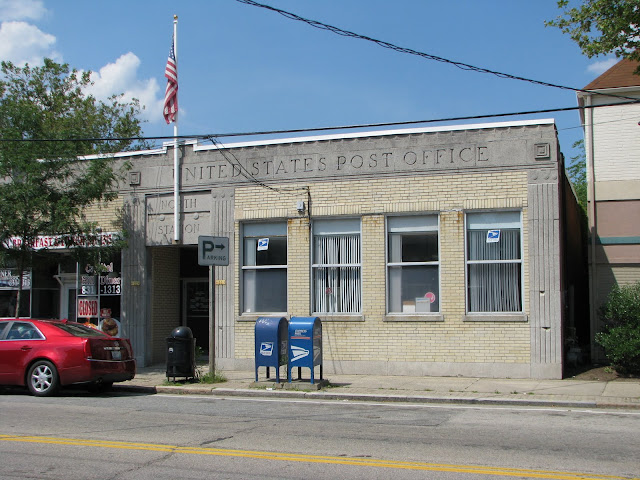 Downtown you've got the Annex Station, which shares residence with the federal courthouse. Here the procedure for mailing a package is unusual, one I've never seen before in analogous settings elsewhere: You have to first walk over and get your package scanned through the x-ray machines (metal detectors?) at the courthouse security checkpoint before it can be given to the PO. This is to assure that the mail won't pose a threat to the building once it is accepted. Interesting. 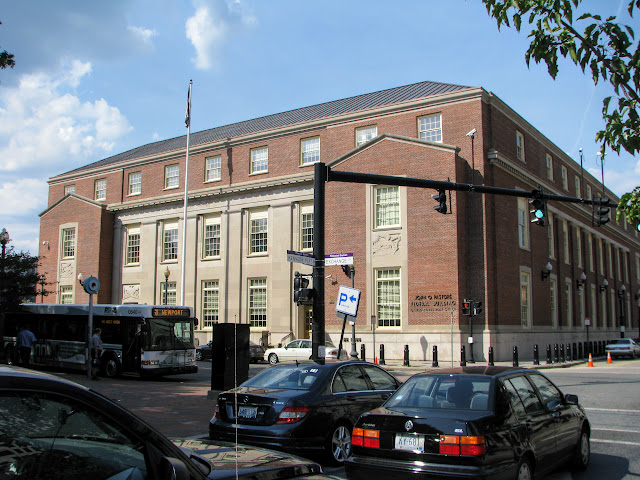 Another Providence post office being studied for closure is the Weybosset Hill Station, which seemed busy enough when I visited it. I doubt it'll actually be discontinued since it's the only facility in the area. 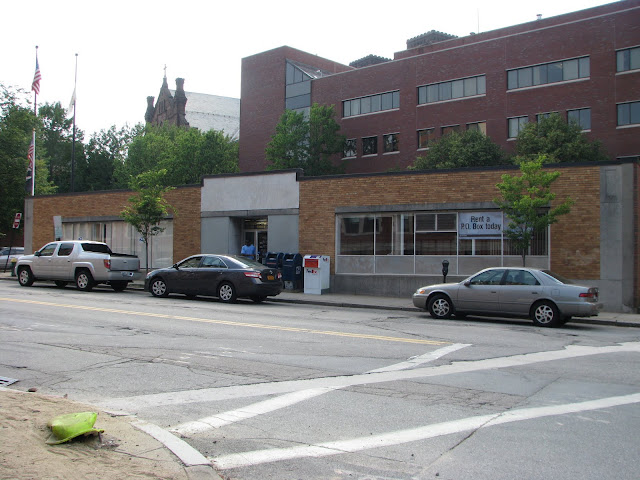 Providence has some other offices, but I think that's sufficient for now. Hope you enjoyed the postal tour!
Posted by Evan K. at 1:05 PM