Or, How to Have a Fun Afternoon in a Seemingly Nondescript Part of New Jersey!

For the second time in a week I had the pleasure of having the company of a lovely lady for an afternoon of postal adventures. Accompanying me on Friday was Sara, a senior at Penn who's writing a 25-to-30-page paper about me for her journalism class. Totally awesome. I picked her up at 12:30 and we shipped on over to New Jersey, though only after 20 minutes of halted traffic on I-95 courtesy a large incident. I had 11 offices on the agenda for the afternoon. With each visited I officially completed a corridor of post offices from Philadelphia to New York City, as well as all New Jersey post offices west of I-295.

Sara had never been to a post office to have fun. Poor gal. First up were the 'twin' offices of Palmyra and Riverton, about a mile apart. Driving up Broad St., I saw the Palmyra post office about 1,000 feet out, across the NJ Transit River LINE, which I'd taken from Trenton to Camden as part of a transportation class field trip last semester. It took Sara a few seconds to catch up in the spotting. I remember many of these towns as having had a nice main street. In any case, the Palymra post office was of a classic late-mid-century vintage. To the best of my knowledge the signage is not the original; it is unusual in that the font has serifs. 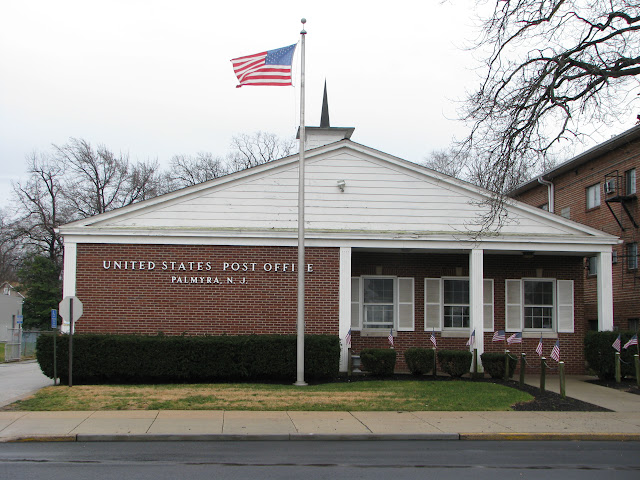 The clerk was friendly and I bought 50 of the new 32-cent postal cards (item #224100). Got one cancelled for my collection. Many offices seemed to have them in stock from the get-go, which from my experience couldn't be said with the inauguration of the 29-centers last year.

This telephoto, taken opposite the post office, captures one of the River LINE trains headed to Camden.

Next up was Riverton, which I could tell right away had only recently been opened. Not only was the signage that bland new small-white-lettering-on-blue-rectangle vintage right inside the front door, but the POS station looked remarkably clean. The clerk confirmed that it was just three years old, and informed us that the old building was three doors down the block and was undergoing renovation courtesy its current owner. Sara's first unscheduled photo-op! She enjoyed chatting with the clerk a lot. 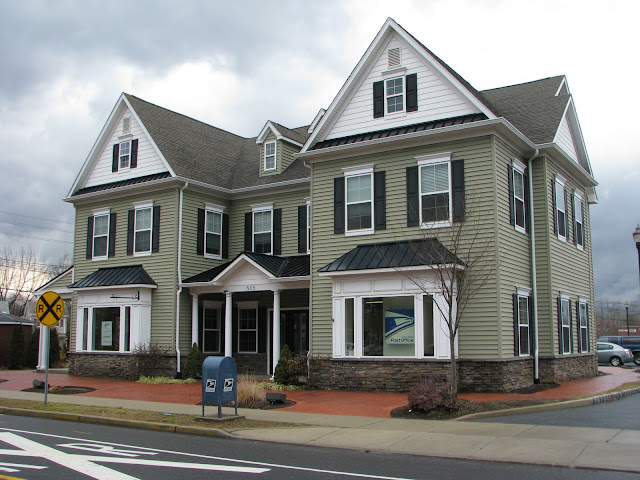 The former site of the Riverton post office; WPA, 1939. No artwork inside. 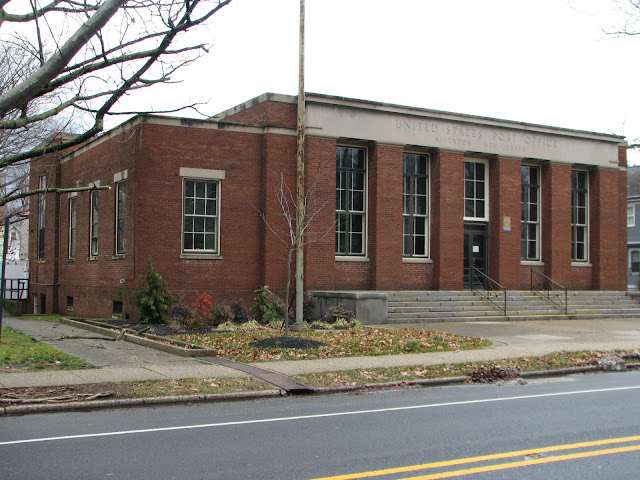 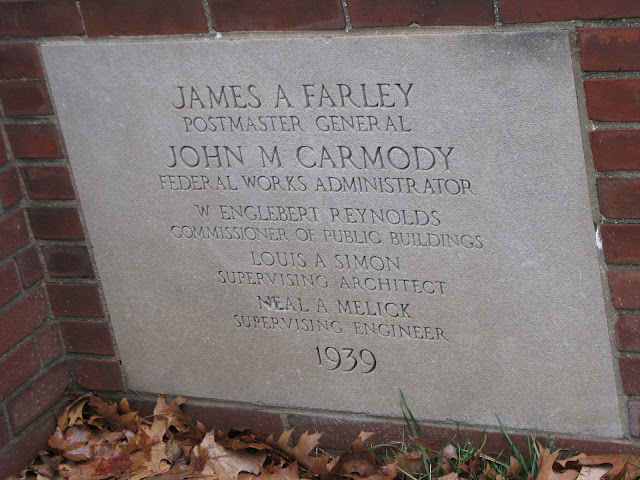 There used to be carriers at the former Riverton post office, but they were recently moved to the branch office at Cinnaminson. This is the uncommon case of a post office branch being larger than its parent office. I believe the Postmaster is stationed at the branch, as well, while parent Riverton is now a one-clerk retail operation.

This office could have been terribly difficult to get to if you missed the turn at Andover Rd. It's recessed from the main pike. If you miss a turn on a pike in New Jersey, thanks to all the jughandles and the general distaste for anything left-turn, it can take a long time to recover. In this case, a 1.2-mile detour recovery would have been necessary. In any case, here there was no wait; walked in, got the postmark, took the photo, headed out. Sara was impressed. 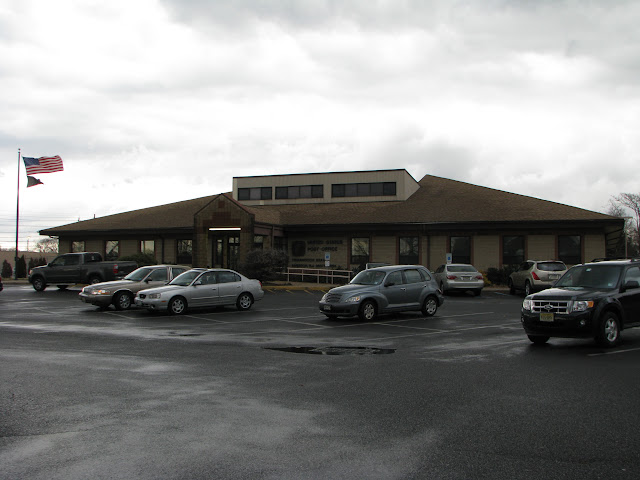 Riverside provided a pleasant stop at another nice WPA post office. This was a 1937 building complete with painted mural, which depicts the hotel that used to occupy the site on which the post office was built. The clerk has worked at the office a very long time, and she has a sense of humor about it. Occasionally she declares to customers that the girl with the goat in the painting is her! 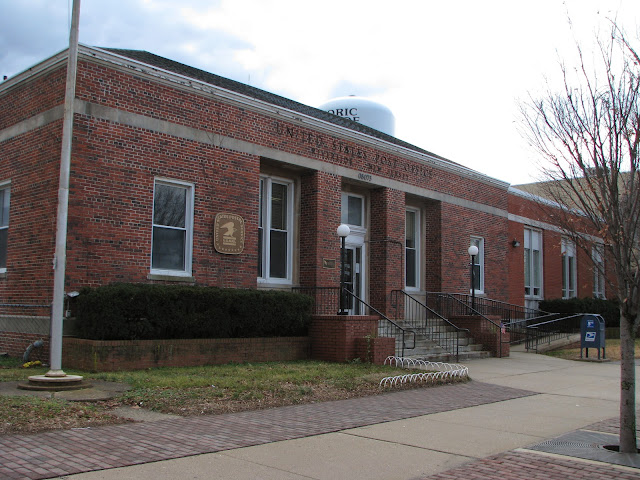 The post office is a bit unusual in that it posts not only a Roll of Honor featuring all of the office's Postmasters, but also a Roll of Honor for Letter Carriers(!) and a Roll of Honor for 'Distribution & Window Clerks' as well! How cool is that? They're framed and everything. It was very classy. Furthermore, I got to learn a few other features of the town's history at the P.O., namely that the town was founded as Progress, and that the Progress Post Office was first established Dec. 22, 1854.

A couple blocks down was a gorgeous building that I was told now houses the town's historical society. 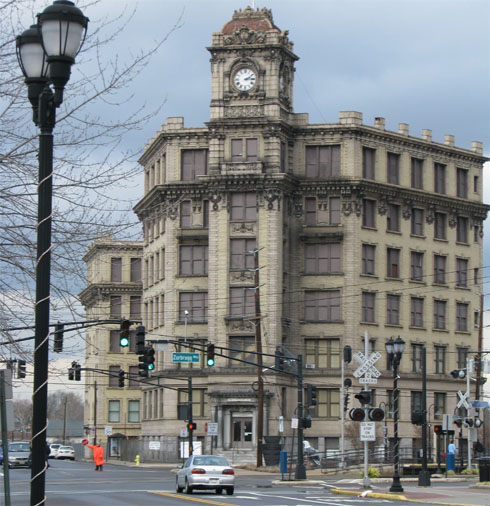 Delanco, New Jersey! Or, technically, the Delanco Branch of the Riverside post office. I must confess, when I saw its setting I was a bit let down, after the grandeur of our previous stop. But I wasn't about to let its nonchalant strip mall character impede the adventure! Here I am at #3,000, and we'll find out why it was such a cool stop just below. 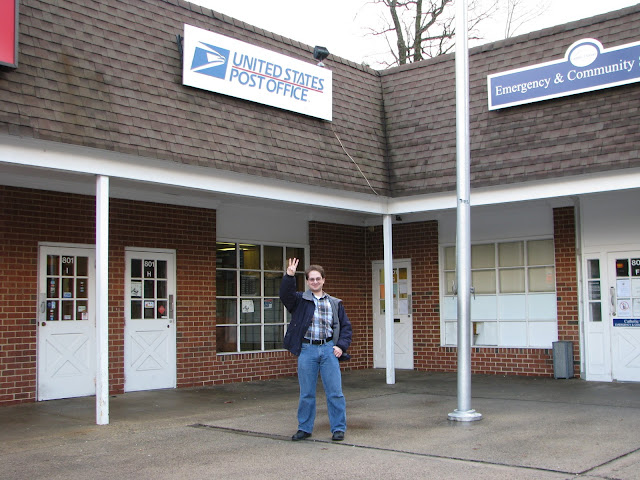 Here, too, was a framed certificate of all the Postmasters of Delanco, NJ, up to its termination as an independent post office on May 31, 1954. The best part of the post office, beyond some of the other goodies I discovered and the nice brass P.O. Boxes, was senior clerk Sal, who took a bow when I told him that his was office #3,000. As a small-town Postmaster would, he knew every customer who came in. The customers, in turn, each professed their love for him and the service they receive in Delanco. A veteran, Sal was also knowledgeable about the post office's and town's history, and regaled me and Sara with a couple of stories.

One ties in to a large commemorative plaque on the wall: 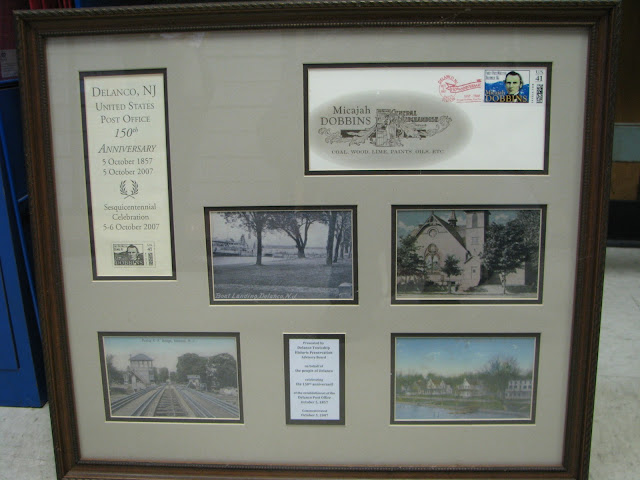 The 150th anniversary of the founding of the Delanco Post Office was celebrated by the entire town, and this was presented to the post office by the Delanco Township Historic Preservation Advisory Board. They did a beautiful job, didn't they?

I always say that even after 3,000 post offices, I can always come across something new. In this case it was the commemoration of the first Postmaster of the town on a custom-made stamp specially by a local artist to be cancelled by the pictorial cancellation. (Yes, it's legal postage.) The artist also prepared this handsome philatelic cachet:

Sal explained that this first Postmaster, Micajah Dobbins, ran the local general store and was known for selling home-grown and -prepared pickles alongside his operation of the post office. As part of the sesquicentennial commemoration on October 5, 2007, Dietz & Watson, which operates a large facility in Delanco, brought in a huge barrel of massive pickles, free for the townspeople to enjoy. Stuff I never would have learned had I not stopped in to visit the local post office!