While I've spent what is now a near-innumerable number of days on the road visiting post offices, I've never actually documented a full day's travels -- until now. We began the afternoon of January 27 visiting post offices #2,996 to #3,000 in my previous entry. Let's see what else happened as the day progressed. 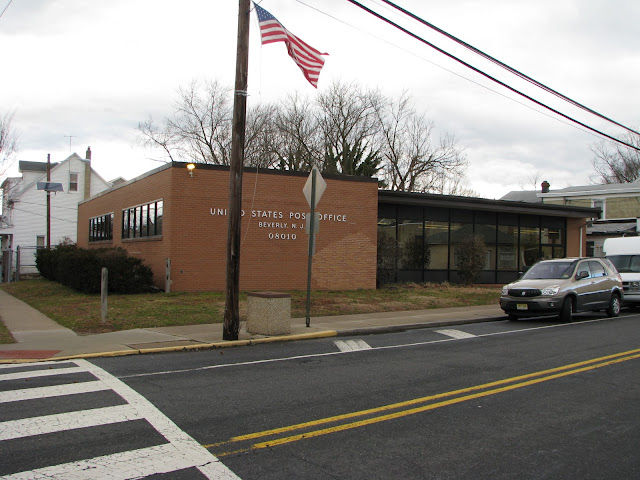 While this building was nothing out of the ordinary, the large, 2.5-inch-diameter postmark with massive, slightly warped lettering absolutely was, and makes a stand out in my postmark collection. Speaking of postmark collections, and speaking of Beverly, Beverly Proulx is the curator of the Post Mark Collectors Club's non-profit philatelic museum in Bellevue, Ohio -- which maintains the world's largest collection of postmarks. She does a wonderful job and would love to speak with you if you think you might have a donation. Just sayin'. 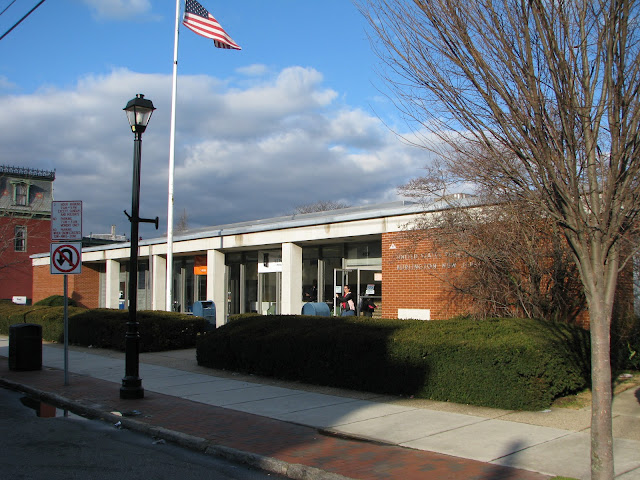 The nice clerk at Burlington (whose name I remembered for three days and then forgot -- bah) made efficient work of the three-package customer in front of me and gave me a handsome large double-ring postmark. I inquired as to the friendliness and philatelic interest with regard to the nearby CPU, and he said they were fine, though their cancel wasn't unique to the location. ... 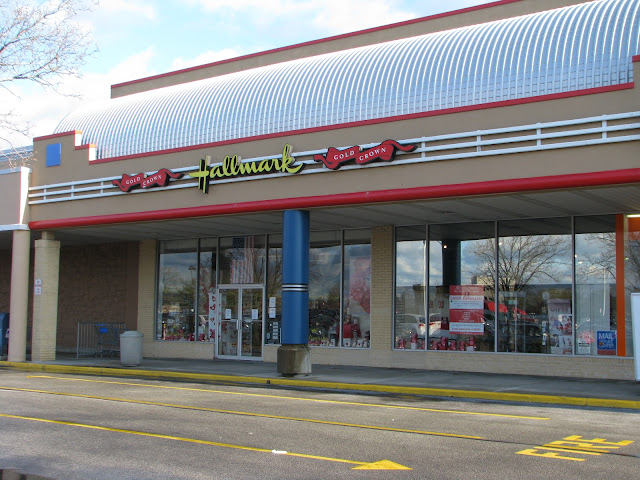 Sara liked this CPU -- her first visit to a postal contract unit! In fact, she found a little gift for her friend here. I bantered with the postal clerk in the back and received a nice four-bar cancel. While it wasn't designated explicitly to the office, it was a different dater than the Burlington PO's. All minor postmark variants are valid collector items in my book. 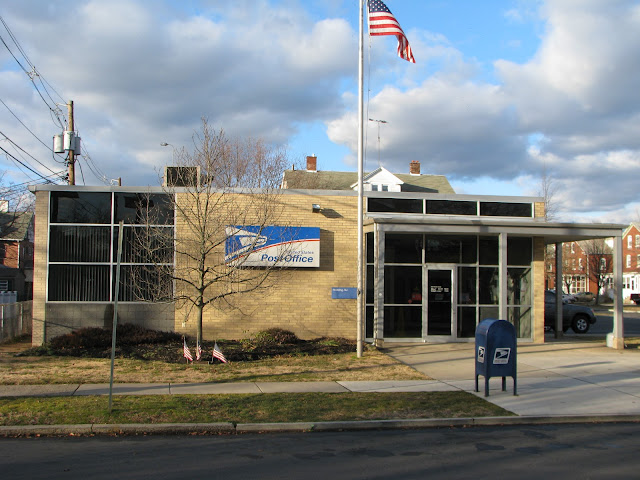 This was a surprise. Not the post office itself, which was architecturally bland with that new white-on-blue signage... Rather, it's what happened next is one of those first-times-for-everything experiences. To understand it, it helps to know a little bit about Roebling.

If the name sounds familiar, it might be because John Augustus Roebling, among his other accomplishments, designed the Brooklyn Bridge. He designed it to withstand loads of more than seven times what he thought the maximum could even be, and that helps to account for the bridge's resilience. Roebling also had a company to make his own wire. Roebling, NJ was founded by J.A. Roebling's son as a steel mill town. This mill made, among other things, the cable wires for the elevators of the Empire State Building, as well as the cables for the Golden Gate Bridge.

Mill towns and mill housing can be found all over New England, and I suspected something similar was afoot when I witnessed housing of similar designs and the gorgeous streetscape:

Okay, so I'm sure it's more gorgeous during the spring, and on days whereupon it hasn't rained earlier. But this view I was quite fond of: 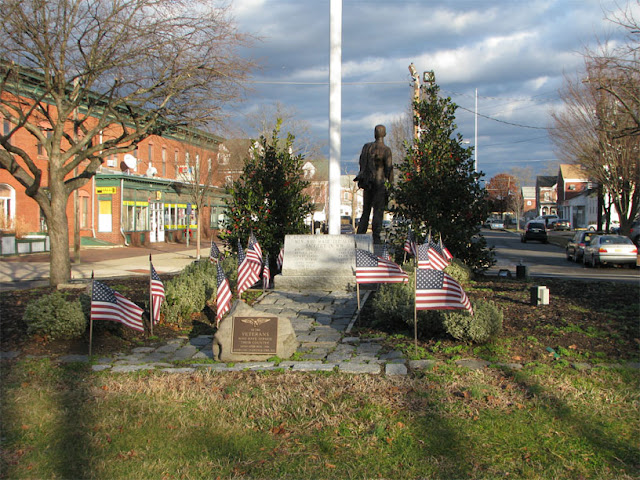 This isn't too unusual in and of itself -- but my taking these photos caught the attention of a local resident who was returning home, and she invited us to follow her to see something interesting, since I told her that I enjoyed exploring the history of the towns that I visit. Obviously, we followed.

Apparently, this woman (here to be unnamed, but an absolute sweetheart) along with her husband maintain one of the original houses and have the only 'original' kitchen left in the town. Original since it's all reproduction, but the effect is fantastic. They were very gracious and explained a lot about the town, the houses, and the various items and appliances they had around. (For instance: The large windows at the front of these houses were in place so that a casket could be brought in to a home for mourning, as this was before the advent of funeral parlors!)

That said, this was the absolute coolest part. Yes, it works. And yes, physically dialing a phone number took a realllly long time. Wow. 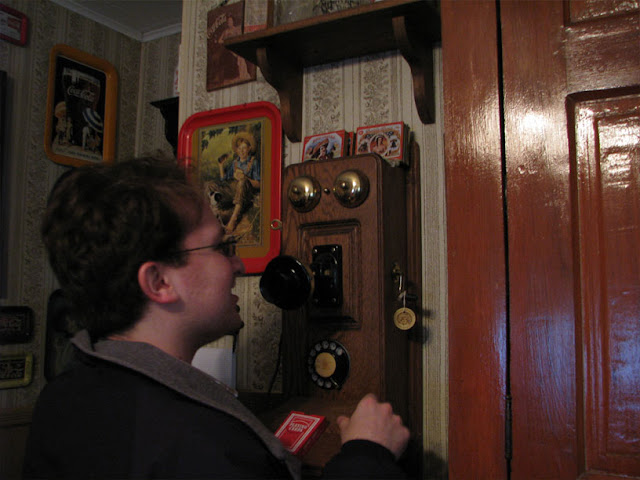 So that was an amazing experience, and the gracious husband even gave me a philatelic cover from the town's October 15, 2005 Centennial celebration! It's a gift fr my dad. ::Shhhh:: 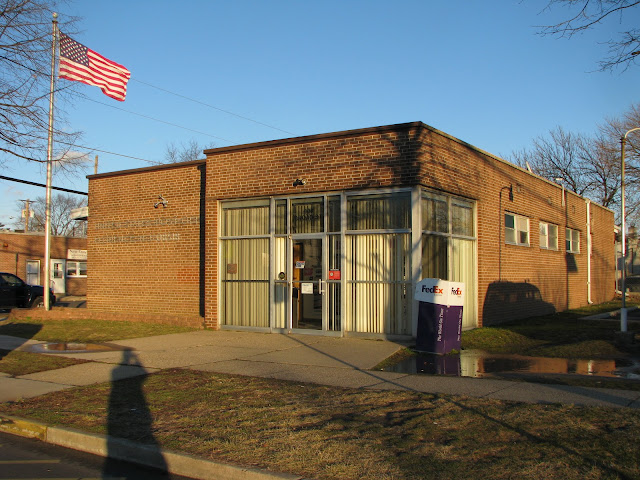 Okay -- I hate to call offices out by name for things, but they closed at least five minutes early, and I had to knock and plead for them to give me a postmark -- which they did, thankfully. Still, I have rarely (if ever) known that to happen ... and in the other two instances I can recall offhand, the locations in question were CPUs. 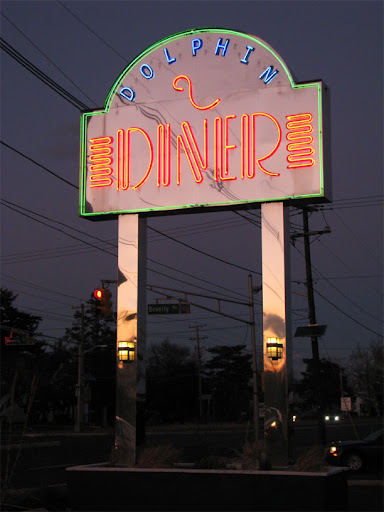 No afternoon in Jersey is complete without a dinner at a Jersey diner. Sara and I cruised down Rt. 130 and settles on the Dolphin Diner in Burlington, which we'd seen on the way north. The specials were akin to Floridian Early Bird specials -- awesome! Sara had breakfast for dinner.

Here the New Jersey traffic patterns utterly defeated me, and I could find absolutely no way to convert my travel from southbound 130 to the Dolphin Diner parking lot. So we settled on parking in the residential neighborhood behind it, walking all the way around, and just heading in. (Apparently there was a jughandle U-turn a half-mile down the road... but how are outsiders supposed to know this?)
Posted by Evan K. at 11:26 PM