While volunteering at the PMCC [Postmark] Museum in north central Ohio a year and a half ago, I took a day off to explore some of the region's POs. In doing so I was able to learn about a little facet of history known by a few. In visiting 26 towns' POs I noticed that many of the names looked very familiar: New Haven; New London; North Fairfield; Greenwich. Norwalk lies to the northwest. Each of those is a prominent town in Connecticut. Here's a map of the region of Ohio in question:

Now, I'd been meaning to write about this connection for a year, but I wanted to be able to present the perfect map that demonstrates why this is the case. In September I stopped in the library after visiting the post office in Rocky Hill, NJ, and walked right into a massive wall map depicting exactly what I was looking for:

(Don't you love it when that happens?)

The land in question is what was known as Connecticut's Western Reserve (see also: Case Western Reserve University, Cleveland), a great history of which can be found on the Thompson, Ohio Township website. Connecticut lay claim to these areas through and west of Ohio as part of its 1662 charter, which, by the King of England, granted the colony "land claims to the colonies westward to the mythical 'South Sea.'"

During the Revolutionary War, the British burned many Connecticut settlements to the ground -- including Fairfield, as detailed in this article by the Fairfield Citizen -- in retaliation for local colonists' supporting American independence. "In 1792," the Thompson, OH website notes, "the Connecticut legislature granted 500,000 acres of the western portion of New Connecticut to those of her citizens whose property had been burned by the British during the war. These lands were called the 'Fire Lands.'" And that's why so many of its towns bear the same names as Connecticut cities. 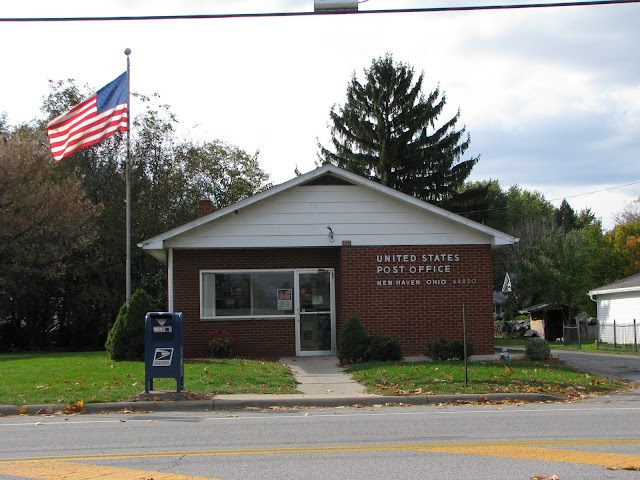 The most fun part of this stop was meeting the friendly Postmaster and getting his autograph -- which, when I first saw, made me do a double take. USPS's Postmaster Finder confirms that I did, indeed, meet James Bond: Postmaster! 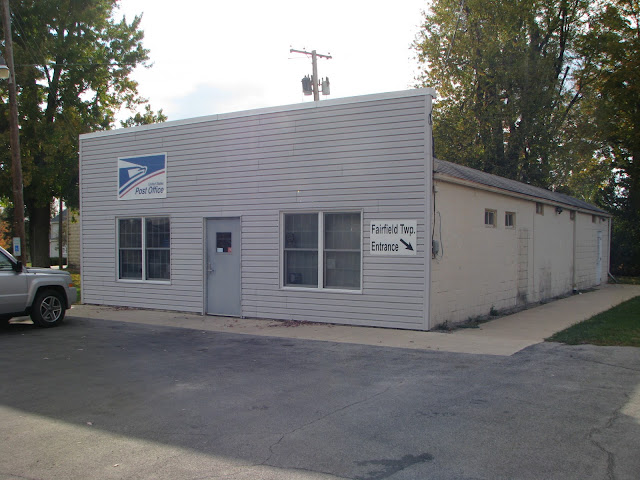 I'm actually not sure whether or not that is a town office in the back. 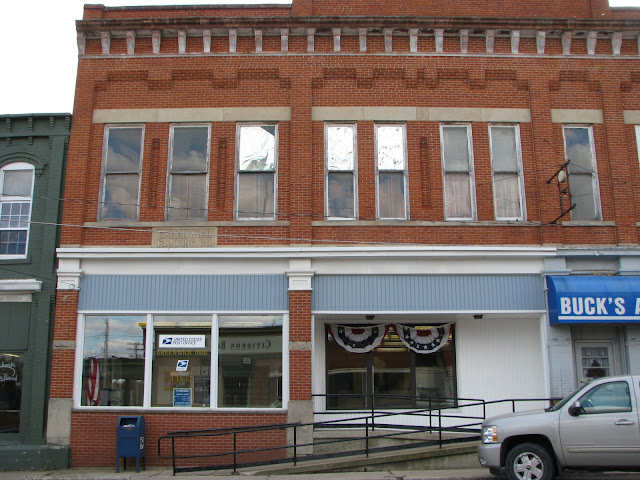 Very photogenic -- love the setting, the gorgeous stenciling on the window, and the bunting. 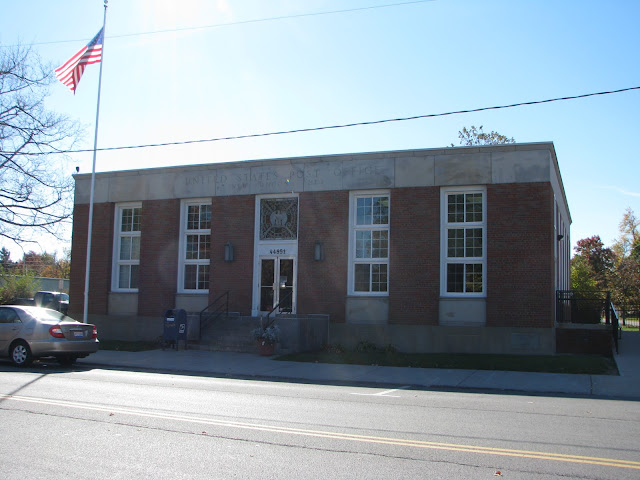 A WPA post office with a wonderfully, fantastically unique mural inside. It was an ABSTRACT mural painted in 1940. Have you ever seen such a thing? WPAMurals.com has the details:
New London Facets by Lloyd R. Ney.
Oil on canvas, 5 3/4 x 14 feet, 1940.
"The abstract style employed by Pennsylvania artist Lloyd Ney for his New London mural was unique among Ohio post offices. This was apparently not the result of any inherent dislike of abstract art by Ohioans, but rather from aesthetic prejudice within the Treasury Department's fine arts section. Only with the help of leading New Londoners was the artist able to convince administrators to approve his original proposal."

The mural, which appears to be relatively recently restored, was presented on PMCC member jimmywayne's Flickr photostream. (Jimmy is another PMCC member who's been to a lot of post offices.)

And this is why visiting post offices is so enjoyable.
Posted by Evan K. at 7:18 PM