On this blog I've shared with you some wonderful and unique experiences I've had during my postal adventures around the country. By now I've visited nearly 10% of all USPS facilities: independent post offices, branches and stations, CPUs, annexes, and processing plants; but there is still plenty more to go. What follows is a list of offices to which I've not been, but which, by my understanding, are either in such bizarre locations or otherwise so unique that a visit to them has to be made. So, without further ado, I present to you: 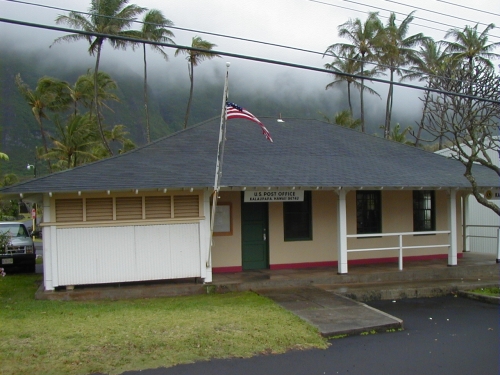 The beautiful and tranquil setting, in a valley along the northern rim of the oft-overlooked island of Molokai, belies a fascinating history. Established in the 1860s, Kalaupapa is the site of what was effectively an island prison: lepers were banished here in accordance with mandatory isolation by Hawaiian King Kamehameha V, and the facility housed as many as 1,200. This held for a century: until 1969, ten years after Hawai'i's becoming a U.S. state, the policy of isolation was still in effect. The site has since become a National Historical Park operated by the National Park Service.

Today, there are still about 14 former sufferers of Hansen's disease living on the site. By law they are allowed to remain there, and it is probable the location will cease once the population dwindles to 0. The post office serves only that population, as access to the site is highly restricted. Access to the valley is granted only to those who take specific tours:

State law requires all individuals to secure a permit to enter from the State Department of Health prior to visiting Kalaupapa. Damien Tours arranges for permits for individuals booking with them. Persons that do not prearrange their visit to the park with Damien Tours (808) 567-6171 will be denied access to the park. [nps.gov]

Last summer, USPS announced the study for closure of the Kalaupapa post office. By December it was determined that the office couldn't be closed, despite the small population served. Even former sufferers of leprosy have the right to universal postal service, too!

My friend, a fellow member of the PMCC, took a tour to the site last January, and notes that while it's possible to photograph the office, access to get a postmark in person is frequently denied so as to prevent interactions of tourists with the town's residents, who have been scarred by leprosy in the past. In this instance tour operators will take philatelic materials to be hand-cancelled at a later date.

This website tells a story of visiting the Kalaupapa P.O. (as well as the actual town) and meeting Ellen, Postmaster Relief, shown below:

2. Hoolehua, Hawaii -- home of the Post-A-Nut service
It's not every post office that gets its own review page on TripAdvisor. Clearly, this place is cool.

The island of Molokai also houses the small town of Hoolehua, the story of which I first read in my Let's Go: Hawaii travel book. The premise is that you can actually mail a coconut, free of packaging, so long as you have a postage/address label affixed to one side.

First, let me validate that yes, you need no packaging (so long as the coconut is not being shipped internationally). Heck, here's a company that lets you order them, slaps a shipping label on them, and puts them in the mail. Coconuts are considered so resilient, and otherwise tamper-proof, that USPS and the Postal Inspection Service will indeed allow a coconut to be mailed free of external packaging. The cost ranged from perhaps $8 to $12, depending on its size.

Now that's cool in and of itself, but the Hoolehua Post Office takes it one step further: they provide the coconuts for shipping themselves. They even have permanent markers that you can write the recipient's address on. Definitely a must-visit.

Here's a photo of some coconuts ripe for the sending at the Hoolehua P.O. (Source)

The guy's got lots of photos of the process on his Flickr page.


3. Post Offices of the Pacific Islands -- way beyond Hawaii
USPS not only administers the mail for Guam and American Samoa, but also for other 'commonwealths in political union with the United States' (the Northern Mariana Islands) and other countries closely associated with the U.S. (the Marshall Islands). They are U.S. Post Offices!

One will note that the Northern Mariana Islands appeared, along with Guam, Puerto Rico, etc., on the Flags of Our Nation stamps (image by USPS):

My lovely friend and her husband, a Marine stationed on Okinawa, took a trip to Guam and took these photo for us: 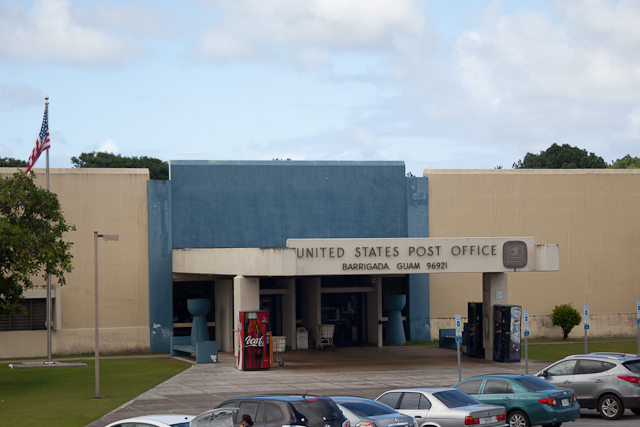 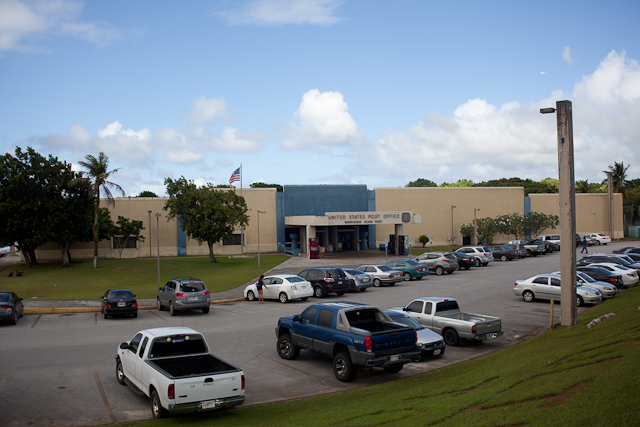 Of course, you can read about all the post offices of Hawai'i and other Pacific Islands in the PMCC Directory! I 'adopted', and was responsible for editing, the Hawai'i list this time around.
Posted by Evan K. at 12:07 PM