[Edit: Welcome, HDNet viewers! I just found out that the segment on World News aired tonight, but I haven't seen it so I have no idea how it came out or how I came across. Regardless, I hope you enjoyed it! You can review some all-time favorite entries at the left, find posts by labels (Pennsylvania, great signs, etc.) below that, or follow the Going Postal Facebook page. Also, I volunteer for the PMCC postmark museum in Ohio.]

I'm always happy to publish photos from other postal fans showing post offices from around the country -- especially if they provide stories to go along with them. I thought it was about time to publish a few submissions here!

Our first, and a gorgeous, submission is that of an office currently being studied for closure: 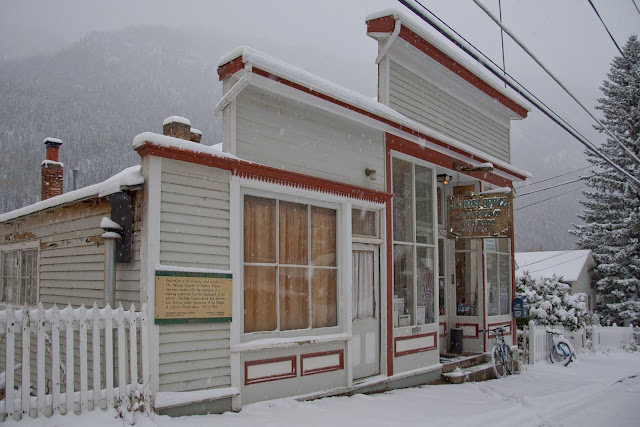 Located in north central Colorado along the I-70 corridor, the town was so named as a former silver mining camp. The population of the historic town was 203 as of 2000. It's a popular tourist town during the summer, with some of the activities detailed on the Colorado tourism site.

The next closest post office is about two miles away as the crow flies, though walking to it would be out of the question: you can only access the neighboring town, Georgetown, CO, by the Interstate. And if it's snowing, you would probably rather admire your town by walking.

It was brought to my attention by a regional reporter that Inyo County, California currently houses 10 post offices, but "four are in some state of closure". One of which is Darwin, and some local postal protagonists established an Occupy site in their efforts to keep their local post office open. Photos of residents in front of the post office can be found on their Facebook page. Here's a photo from said: 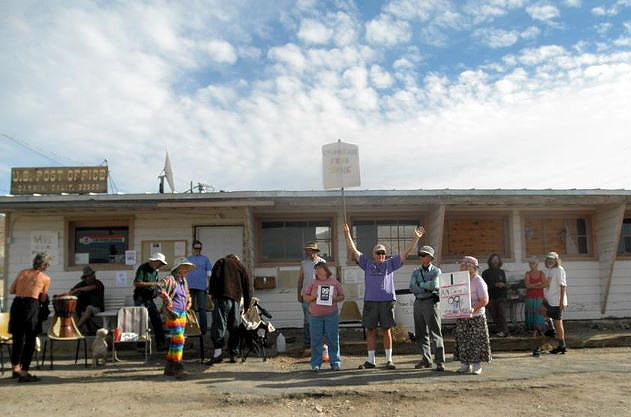 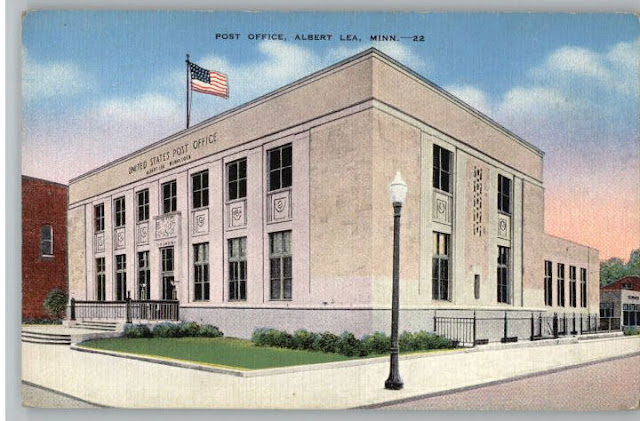 Albert Lea is located near the southern border of Minnesota:

A local postal employee notes that while the Albert Lea post office is not in danger of closure, the town takes pride in its WPA post office. There are lots of beautiful details that employees and customers admire alike: "There are carvings on the front of the building depicting the history of the postal service, including images of pony express and early air mail. The inside has a lot of beautiful woodwork and terrazzo tiles in the lobby in intricate patterns. There is also a lot of decorative plaster designs on the ceiling around the light fixtures."

I love unique and humorous stories, and I particularly enjoyed reading this one:
"Many of the original glass globes for the light fixtures were cracked or broken. About a dozen years ago the maintenance man was looking to replace them but could not find anything like them. Then he happened to go into a kitchen store in a nearby town. Here he found many salad bowls that were the same size and shape as the original glass ones he was looking for. He bought enough for each fixture, drilled holes in the bottom of the bowls, and attached them to the fixtures. People cannot tell that they are not original. There is also a beautiful stained glass window in the lobby stairwell going up to the second floor. Today the building looks the same as when it was first built."

Pool, West Virginia:
[I've got no photo! Alas.] Jeff, who has since moved to Pennsylvania, writes:

"I lived in Pool for 3 years back in the early 90's. The Post Office there was in one corner of an old farm house. It was about 9' by 12' big. Two sisters and two brothers lived at the farm and raised sheep. The farm had belonged to their parents and none of the four had ever married or left. Colorful, friendly people. They invited me into their house once to show me their Charlie Brown Christmas tree.

One of the sisters (the names escape me) was the postmaster and seemed to always be there no matter what time of day you stopped. You walked through the yard, where the sheep roamed, to get to the PO which had it's own entrance. When I first moved there I went in to get a box and the lady said "Which one do you want?" She had about 50 boxes but it seemed that no more than 20 were ever used at one time while I lived there. I picked PO Box #25 because it was easy to remember.

Interesting enough, that was the first place I ever bought the self-adhesive stamps when they were brand new. I remember the lady telling me about them when I was buying stamps and offering the choice of the old ones or the new ones. When I moved to Pennsylvania (near Philadelphia) shortly after that I went to the West Chester, PA post office to buy stamps and when I asked for the self-adhesive kind they had no idea what I was talking about! They actually had them first in that little PO in Pool. Pretty cool!"

Note:
And, if you can't get enough post offices images, another website that focuses on Illinois and Iowa facilities can be found at Post Office Freak!