Instead of Prescribing Sound Policy, The Times Plays Parrot and Discovers VPOs 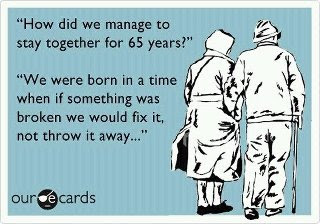 The New York Times should know what it's like to be seen as an institution in decline, considered by many to be a dinosaur in a modern age (and destined for extinction). There are many parallels that can be drawn to The New York Times's recent past and USPS's present. Its core business model, its bread and butter – circulation and advertising – has been declining steadily for years. The thing is, whereas the newspaper has applied its core values toward new business models that have rejuvenated the organization and increased its revenues over the past year, its recent editorial declarations vis-à-vis USPS run counter to everything the newspaper has supposedly learned. What The Times has recently advocated is effectively USPS's continued hurtle toward obsolescence.

Here's a recent Editorial by the Times to which I'm specifically referring: March 1, 2012. It could've been written word for word by Mr. Donahoe's secretary himself. (Replies by the National Association of Letter Carriers and the Direct Marketing Association were published one week later, with the former stating some common sense and the latter agreeing with the editorial in pursuit of its own interests.)

Over much of the last decade The Times floundered, but it didn't succumb to its new competitive environment; rather, it staked out its claim in the digital landscape. Postmaster General Donahoe calls himself USPS's CEO because he thinks of USPS as more of a business than a service. Good businessmen don't throw up their hands and declare societal defeat. Rather, they adapt their business models by providing new services to maintain their organizations' relevance in changing societal landscapes. (It also helps to get their billions in pension overpayments back from Congress, but that's another story.) Consider: Netflix was named in anticipation of its original DVDs-by-mail business model's evolution.

Allow me to provide a quote from The Times's 2011 annual report: "... [I]f our cost-control strategy is not managed properly, such efforts may affect the quality of our products and our ability to generate future revenue." So The Times was smart about it, and didn't compromise its core values – namely, maintaining its legion of news journalists, even though cutting its reporting staff would have made for easy cost reductions. That is, Times executives insisted on maintaining the publication's relevance to society through (hopefully) top-notch journalism. Now that retained network of reporters is producing material that the paper is extracting new revenues from by virtue of its new online business models. Perhaps USPS could learn from this? (I always thought that was called "If business is down, maintain your core values and leverage your existing infrastructure toward the provision of additional services for increased revenues." But I digress.)

That all said, it is supremely disappointing that The Grey Lady has offered little constructive analysis of the situation that USPS is in; instead its Editorials and the reporter whose work follows make the paper come across as a mouthpiece for USPS Corporate Communications.

The following is in response to a piece that ran today, heralding the advent of the cheap facsimile of a post office known as the Village Post Office or VPO, also known as "Hey, it's better than having absolutely nothing at all in your town, isn't it?" (Or, alternatively, Glorified Stamp Sales Locations. By no means are VPOs deserving of the title "post office".)

Here's a link to The Times's drivel regarding Village Post Offices. This reporter appears to have done nothing beyond expressing USPS's corporate stances. He quoted four people: the man who runs a new postal-esque operation; a USPS Corporate spokeswoman; the Postmaster General; and a Senator whose views generally parallel the PMG's. That's not good journalism practice. Let's see how many misleading or otherwise non-insightful statements we can find, and let's set the record straight... or at least express alternative views.

The Postal Service has long allowed retailers to sell postage. But now it is arranging to provide some basic mailing services [1] in stores in rural areas like Brant, Mich., a town of just over 2,000 [2] about 30 miles southwest of Saginaw.

[1]: If, by "basic mailing services" you mean "having Priority Flat-Rate boxes on-hand, and absolutely not one thing more", then this statement is accurate. [My friend Kelvin presents an interesting comment below this post, incidentally.]
[2]: No town of 2,000 people should be without a U.S. Post Office. Though that figure entails 40 square miles of land. Satellite views show "downtown" Brant's appearing more like a crossroads... That population figure is extremely misleading; absolutely no physical town of that size can be adequately serviced by such an alternative access location. That readers could be led to make such invalid inferences given the information in the article is irresponsible journalism.

The post office there closed last year because it did not have a postmaster [3] and another post office was nearby [4].

[3]: USPS could assign a Postmaster anywhere it pleases. They elected not to fill the job. That's no excuse.
[4]: What editor approved the term 'nearby'? Even in USPS's own judgment there is not a post office 'nearby'. In calling for the dismissal of the PRC appeal regarding the closure of the Alplaus, NY, CPO (page 6), 'nearby' appears to constitute a postal site within five miles: "[f]ormer customers of the Alplaus CPO may obtain postal services ... [at] other alternate access options located within 5 miles of the Alplaus CPO." Let's see how many locations are "nearby" Brant:

Precisely none. And as the car drives, it's 6.5 miles to that post office. That image comes courtesy USPS's proprietary postal locator.

Last October, the Postal Service contracted out services to Nixon's Grocery, a store known primarily for its produce and fresh meats. Although it does not provide the full range of mailing services [5], residents can mail letters [6], buy stamps [7] and send packages [8]. There are also 20 post office boxes for rent [9].

[5]: It does not provide ANY mailing services. There's no delivery confirmation, there's no certified mail, there's no weighing of packages, there's no insurance available, there are no money orders, there's no...
[6]: USPS put a collection box out front. They can do that anywhere. This has nothing to do with the VPO.
[7]: They can buy exactly one type of Forever stamp. If you want Owney the Postal Dog, International Rate stamps, some $5.15 Priority Mail stamps for all those Flat-Rate boxes you'll be sending, or one-cent makeup rate stamps for your old 44s, you're out of luck.
[8]: You can't send a package unless it's inside a prepaid Flat-Rate box. You can't send a package Parcel Post, Media Mail, or Express; you can't use your own box.
[9]: How many more P.O. boxes were in service before the closure? (How much revenue did USPS give up when people turned to supplying their own mailboxes for rural delivery?)


The store’s owner, Gary Nixon, said he received about $500 a year [10] from the Postal Service for the setup.

[10]: This figure is not representative of VPO contracts to date. Courtesy a Freedom of Information Act request filed by a friend in Chicago, Going Postal has learned that the average VPO contract costs USPS $3,350 per year [median: $2,950]. The largest contract is $9,200 in "nearby" Glenn, Michigan (137 miles away).

"We didn't do it for the money," Mr. Nixon said. "It's a service for our customers. People really appreciate it. [11]"

[11]: I respect and commend Mr. Nixon's efforts in offering to serve his community as best he can. But do you know what his customers might appreciate even more? A real post office. USPS could've at least offered the community a CPO. What Mr. Nixon is really saying is that the residents of his town want their real post office, yet USPS is refusing to provide it for the community. In its stead he's basically doing volunteer work on behalf of USPS for $1.50 a day, because the town was given no other option.

The village post office is one of the many ways the Postal Service is seeking to cut cost as revenue declines. The agency said it could not tell how much it would save by setting up shop in small groceries and hardware stores, but it did say it expects to save $200 million annually by closing branches [12].

[12]: That's just a line straight from the top. On the one hand, we have 10% of the postal network, representing every community in America. On the other hand we have the supposed whopping savings of 0.3% of total operating costs. Even if USPS momentarily realizes $200 million per year in direct costs, how much is it losing in (a) damage to organizational reputation; (b) revenue from those who would rather not head to the next available post office; or (c) revenue from those who would rather not wait in the now-more crowded neighboring operations? Also, "branch" was not the proper term to be used in that context.

Sue Brennan, a spokeswoman for the Postal Service, calls the arrangements with stores a win-win for local communities and the service. [13]

[13]: Why, it's almost as though the closure of the post office is really a blessing in disguise for the community! As opposed to, say, a detriment to business districts, a competitive disadvantage for communities that can no longer sport this fundamental service, and a drain on local economies: here. (See "Economic Development Effects of Losing a Post Office", page 21-22. The whole document's a pretty good read.)

"We want to have a presence in these communities, but we simply can’t continue to do what we are doing," Ms. Brennan said. "These village post offices saves [sic] us money and still provides needed services in the communities [14]."

[14]: USPS could have at least provided a reasonable facsimile for a post office by way of a CPO. By contrast VPOs do not provide all needed postal services to communities. One wonders if this reporter headed over to the "nearby" Saint Charles post office to ask how many Brant residents have walked in with their shipments, exasperated that their new and improved local "post office" wouldn't let them ship a package using their own box. (Noting, of course, that Mr. Nixon, surely disappointed that he couldn't help his residents in these instances, told them that they had to head to the nearest real post office to handle their transaction.)

[15]: Because Walmart employees are most assuredly highly trained in the postal arts, and will certainly offer you the same care as the local Postmaster they're replacing.

"Any savings we can get helps us move toward financial stability," Ms. Brennan said [16].