No businessman in his right mind would pull his consumer-oriented retail operation out of a high-traffic shopping plaza and place it, instead, miles away, in an industrial building, behind iron fences, at the end of a difficult-to-access dead-end road beside a highway.

Of course there are some operative words in that statement; I'll let you figure out which words those are.

Facilities folks in California have been consolidating operations left and right, taking postal retail operations out of commercial districts and shoving them into carrier annexes along the edges of communities: Ukiah, Santa Monica, and El Segundo come to mind from the past year. Many of the retail operations being closed and unceremoniously disposed of include historic buildings from the early 20th century and the Great Depression. (See: Venice, Santa Monica, La Jolla, Berkeley, and Ukiah.) This has been accomplished done over many of the communities' dead bodies. But the most absurd plan stems from the area of Thousand Oaks, which lies between Los Angeles and Ventura. Here the Postal Service wants to consolidate the Newbury Park Branch [retail operation] into the Newbury Park Carrier Annex. I actually spent two nights at a hotel right by the Newbury Park post office last summer when my car needed brake work.

To give you a geographic fix:

USPS currently leases the Newbury Branch post office for $179,232 a year. There seems to be good reason for this; according to the USPS California Leased Facilities Report, the post office has been in this shopping plaza since May 1968. The present lease expires in April. This site was chosen to be as accessible to members of the community as possible, and has clearly served this purpose well. Let's access a visual: 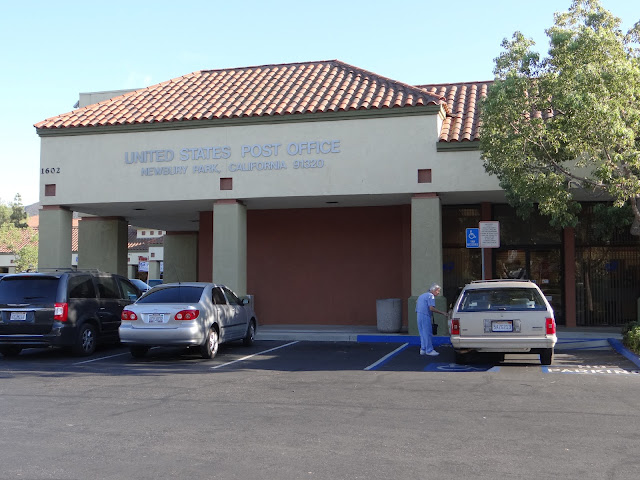 I was one of five customers at the time I visited the branch. The location also has stacks of P.O. Boxes and is accessible to box customers after hours and during weekends. One guesses the woman in the photograph above finds this location very convenient.

As Save The Post Office has previously detailed, there are 14 retail outlets, including a UPS Store, in that shopping plaza. My hotel was across the street, and three more shopping plazas are nearby. All the restaurants, grocery stores, drugstores, car repair shops, and In-N-Out Burgers are over in this commercial district. Basically, anything a Californian wants is here, and that's why the post office is here to begin with—people go here.

The Postal Service owns and has operated the Newbury Park Carrier Annex since 2001. It's a facility that was designed to be on cheap remote land, accessed only by carriers who head in and drive their trucks out of there as soon as humanly possible. As you can see, it's not exactly the epitome of warm and inviting: 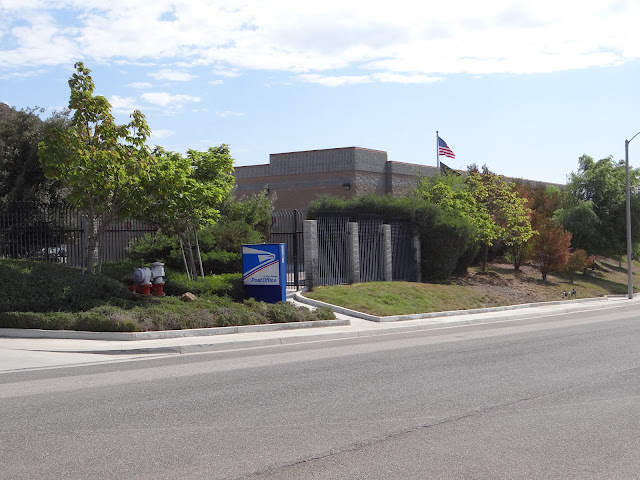 It's incredibly unappealing even if you can see the actual building: 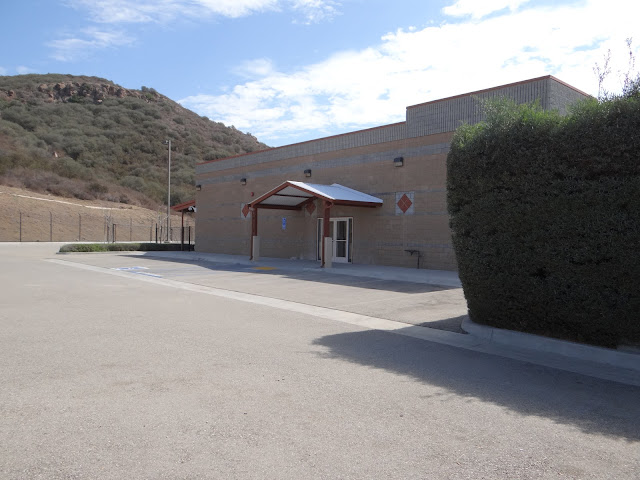 (Behind this is the stunning vista of six lanes of asphalt!)

Clearly, it's an utilitarian structure. It's in the industrial part of 'town'. Though, actually, it's not in any part of town. There's a steep hill behind it, so don't expect much development nearby anytime soon. And out of curiosity, can you find any windows on here? Google has a nice 45-degree aerial view of the site:


Let's check out some maps!

The Newbury Park Carrier Annex is a 2.5- to 3.1-mile drive from the Newbury Park retail site, depending the route you take. I drove the route and can tell you firsthand that the directions are not straightforward. There are immediate-turns-after-turns, curves, and freeway entrances to avoid. That, and any customer expecting a commercial venue would wonder whether they're even on the right road when heading to the Annex. Without an accurate map you will most likely get lost at least once.

The satellite view shows a clearer picture of the Newbury Park land use patterns. 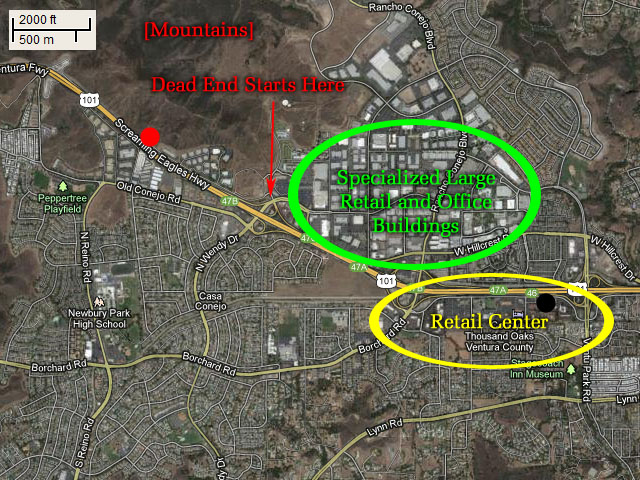 Residential areas are located primarily south of the highway, as is the primary retail District including the present Newbury Park post office. North of the highway, you find primarily office parks, industrial companies, and The Home Depot -- specialized operations not designed to be visited by everyday consumers on a daily basis.

So Where's Waldo the Carrier Annex? Down 0.6 miles of dead-end road, past a church and operations such as Verizon Wireless Business Services, Westlake Sheet Metal and Advanced Solar Electric. This location could be physically closer for some residents, but mentally it's a complete pain in the butt. No matter what other errands or plans you have that day, you have to head 2.5 miles in the other direction.

This said, what would you expect to result from the Postal Service's current plans? Well I wouldn't want to have to drive three miles out of my way to access my P.O. Box, so maybe I'd close the Box. Perhaps I'd move it to the still-conveniently-located UPS Store instead. Maybe I'd give UPS a chance for my packages, because I'm conducting all my afternoon shopping right in the shopping plaza, and not three miles to the middle of nowhere. Tell me the Newbury Park post office will not lose a great proportion of its revenue as a result of Facilities' charade.

If the Postal Service were intentionally trying to drive away customers -- if it were intentionally trying to make itself less relevant to the public than it claims it has already become, then it could do no better than to move its retail operations here. At the moment, the Postal Service is located in a prime retail spot that has served it well for nearly 45 years. If it ain't broke, don't fix it; right? Instead, USPS could not have picked a better location within the entire community to make itself more inaccessible and uninviting.

The site for the Newbury Park Carrier Annex was chosen for cheap land and to be used by employees only. It should remain that way. 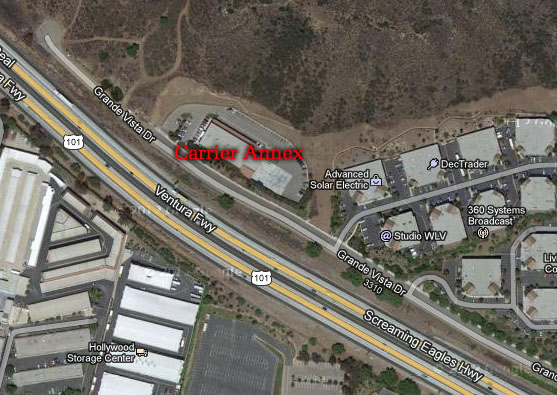