Hi, everyone! It's been a while. Life; motivation; etc., y'know? I have been feeling motivated to write a bit since I just took my first post office trip in a while. It was actually a pair of weeklong trips, in early October, through northern New England and Upstate New York, and during them I photographed 306 post offices both old and new. (Actually, just about 250 of them were new. The other images are generally greatly improved pictures of places I visited on the order of ten years ago.)

It was peak tourist season in northern New England for leaf peeper season, and so I bounced around a lot to track down decent rates for lodging. One unexpected detour took me to the coast of Maine, where I spent several afternoons taking ferries to visit post offices on more islands. This will be the fourth Postlandia post to feature post offices on the islands of Maine; the first three were published just about exactly ten years ago: November 2011. Here's a link to the first post!

The posts of ten years ago featured MacMahan, Squirrel, and Bustins Islands. This time we head further east along the Mid-Coast region, to several post offices accessible via ferry from the towns of Port Clyde, Rockland, and Lincolnville.

I'm not sure exactly how this post is going to play out at this time, but I think I'd like to get back to basics and share some fun findings from my experiences. Adventure time! Let's go.

It's not often one takes the last boat out to Monhegan and returns the same afternoon, so I was asked if I'd meant to park in a short-term parking spot along the dock. Yep—I had! I'd be joining laundry and one of the employees at the Island Inn, as well as several visitors and residents, on the journey out, and once offboard I'd have about a half hour to find and photograph what I wanted, and return. This was indeed how I was spending the greater part of my afternoon (having driven the hour 45 minutes from Portland) and $38, I reassured them. The ferry departed Port Clyde at 3:00 and returned at 4:30. 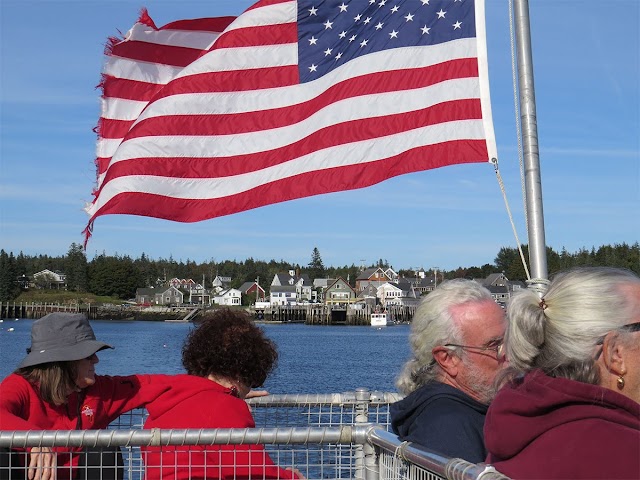 View from the ferry, looking back toward Port Clyde.

Monhegan features a lighthouse, a museum, multiple lodgings, and art studios to explore for those not popping off the boat for a mere 20-minute jaunt. During that time, however, I was able to get nice photographs of the Monhegan post office and, on the 0.3-mile walk there encountered an intriguing little spot called "Elva's Old P.O."—something that definitely demanded a little visit.

But first, here are a couple of scenes from the island on my way to the post office: 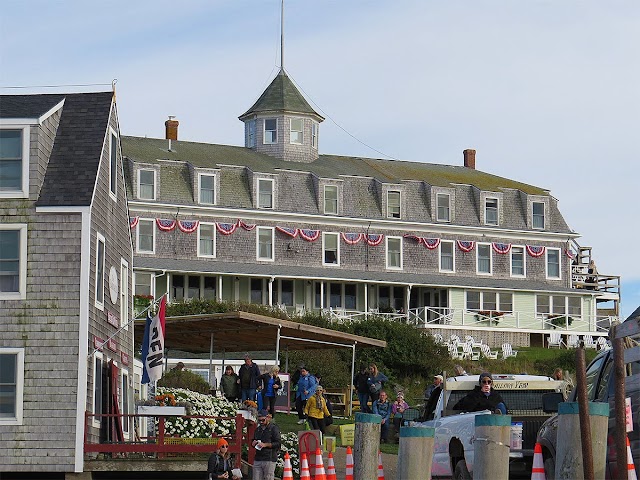 Waiting at the dock on Monhegan; Island Inn in the background. 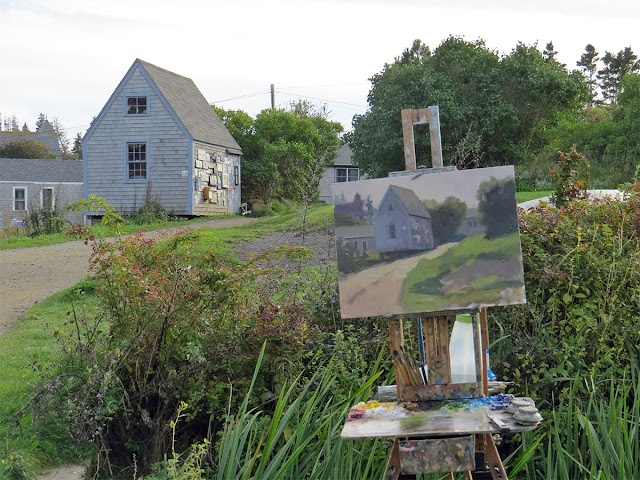 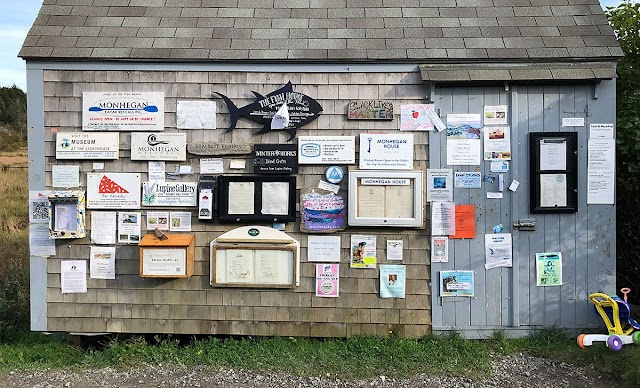 The community "bulletin board." 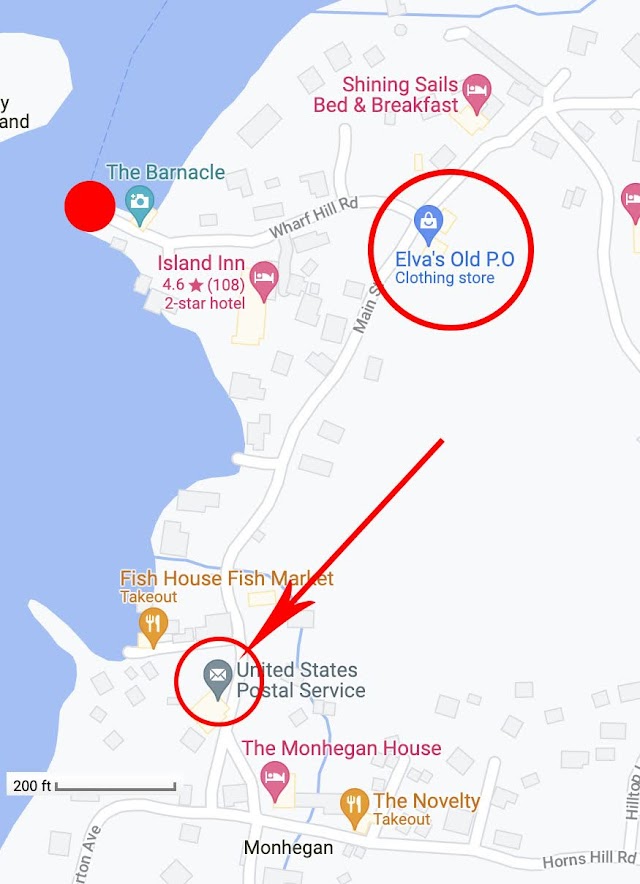 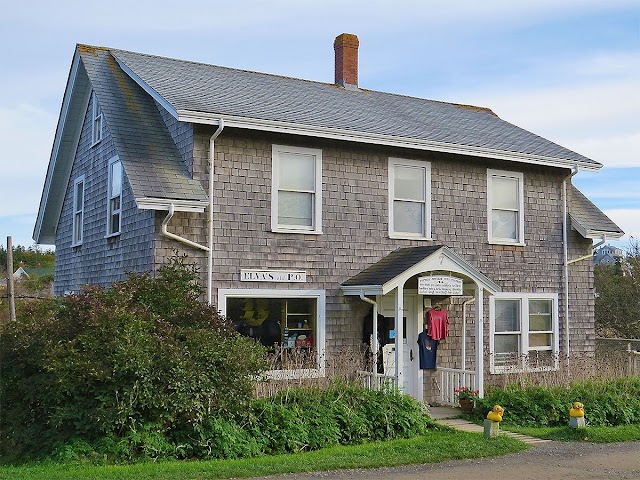 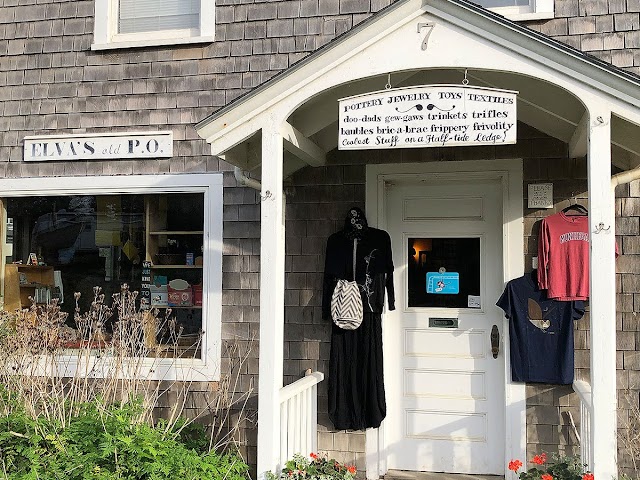 How could you possibly resist?

The store was named after Mrs. Elva B. Moody, who served for decades as Monhegan's Postmaster. The store, indeed, served as the post office until the mid-1970s.

It is lovely inside, and the proprietor is very nice. Here's a scene from inside. Note the old post office sign on the wall! 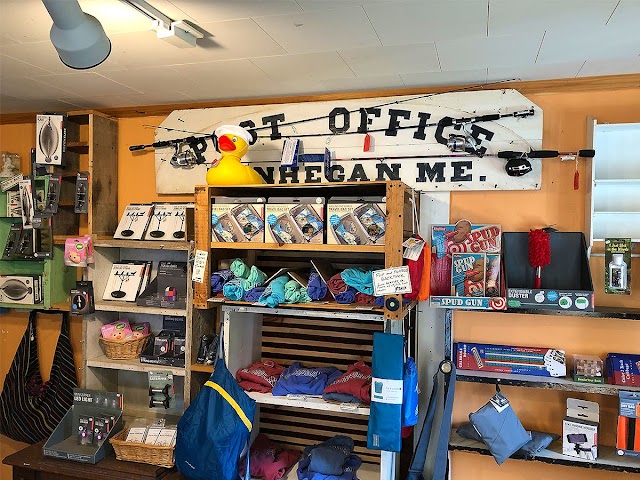 The book "The Fortunate Island of Monhegan: A Historical Monograph," by Charles Francis Jenney (1922) details the postal history of Monhegan:

The route and schedule were reversed June 1, 1885, Monhegan being made the head of the route.

In 1889, upon the division of Boothbay, the terminus on the mainland became Boothbay Harbor. The schedule in effect for the contract term beginning July 1, 1889, was as follows: Monhegan to Boothbay Harbor, three times a week on Tuesday, Thursday, and Saturday, from April 1 to November 30, and twice a week on Tuesday and Saturday, from December 1 to March 31 of each year. No change was made until June 1, 1902, when an order was issued increasing the service to six times a week, from June 1 to September 30 of each year and the winter service to three times a week.

Effective July 1, 1908, service was established between Thomaston and Monhegan, six times a week between June 1, and September 30, service being performed the remainder of the year from Monhegan to Boothbay Harbor, three times a week, by a schedule satisfactory to the department.

Mail is still transported by ferry to this day. USPS's Postmaster Finder tool fills in the rest of the gaps in Monhegan's Postmaster history. It, combined with the information above, reveals that Elva served as Postmaster for more than 42 years.

I was told (alas, only once I was on the boat on my way back) that the P.O. then relocated to a white house behind the Island Inn, and that there had been an extension built onto the structure. I'm unable to identify the exact property at this time.

According to a slightly old version of USPS's Leased Facilities Report*, the post office has been at its current site as of November 1987. A community association owns the property, and as of a few years ago the 526-square-foot space was being leased for $12,000 per year.

* The USPS Leased Facilities Report has stopped including original building / site occupation dates. Why? I have no damn clue. There was no reason to retract or remove the information from its databases. I presently use an archived (2015) version of the Report for such information.

The post office is located in what looked like a well-kept building with texturific New England-style siding. The P.O. features a worn, handmade sign and its hours are Monday through Friday: 8:00 am—1:00 pm, 1:30 pm—2:30 pm, and Saturday: 9:30 am—1:00 pm, meaning it would be closed (and, indeed, locked) when I stopped by. This just meant I'd have to mail out for a postmark at a later time! 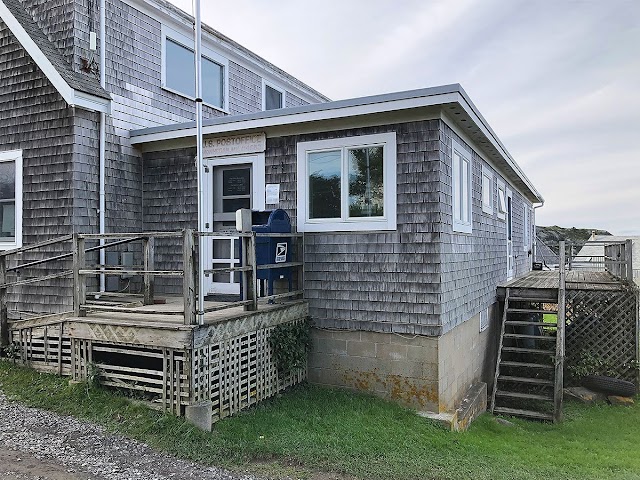 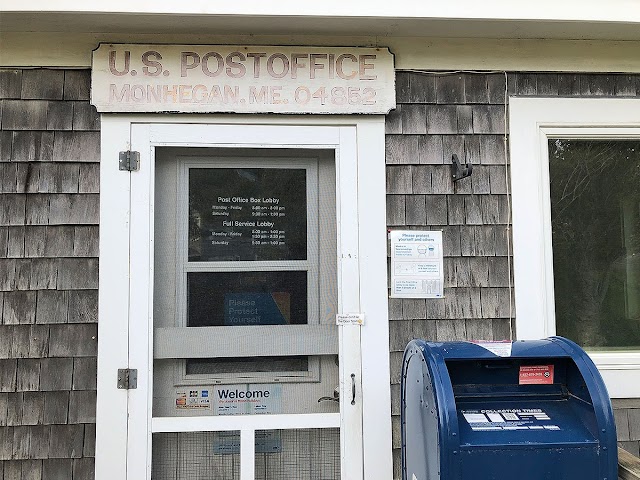 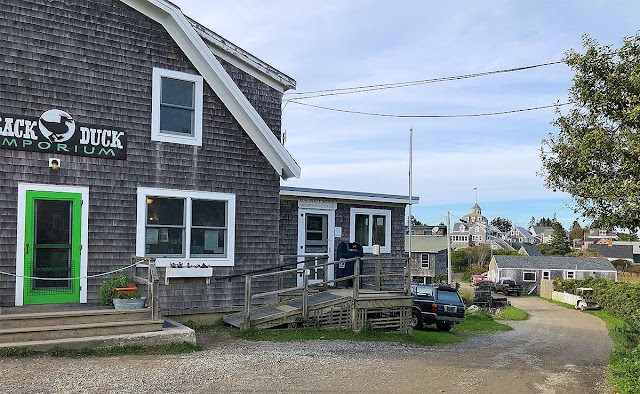 Directly adjacent to the post office is the Black Duck Emporium, a pleasant-seeming gift shop and café that was closing for the day at about the time I arrived. There appeared to be living quarters above the store.

And with that, it's time to return to the mainland. For now I'll leave you with a photo from the Port Clyde—Monhegan ferry. See you next time! 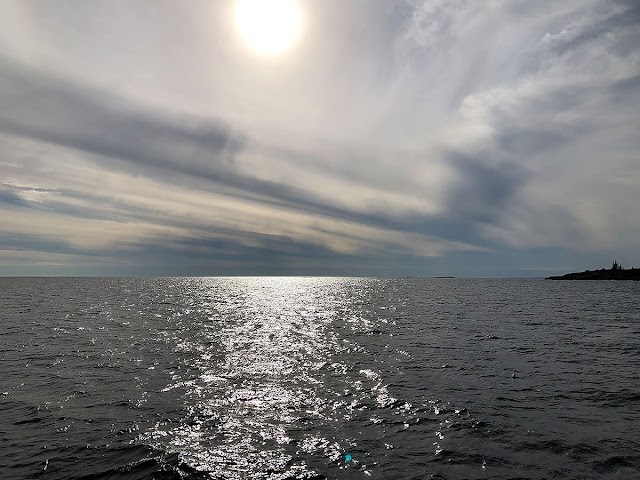