[The Five Islands dock; view from the boat to Macmahan Island (and its attendant PO):] 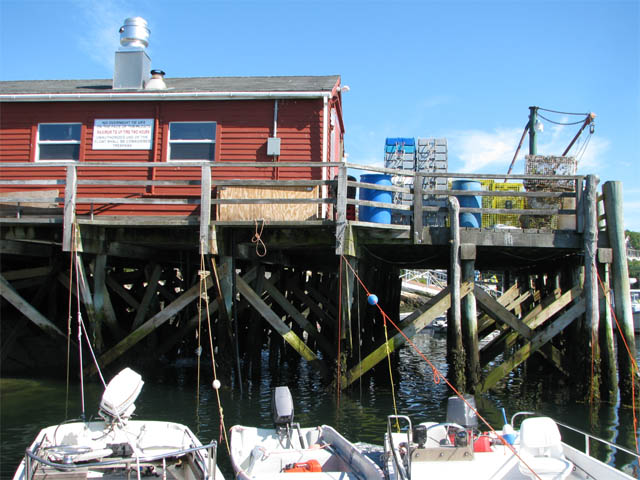 When you're invited to partake in a postal tour of islands of Maine, you don't say no. Assuming your job is over for the summer and school doesn't start for another month, anyway. Together, three postal tourists with a combined 38,000 post offices visited set off and discovered some astoundingly quaint offices on some of the small islands off the Maine coast. (Yes, that number is correct. Some folks have been doing this for decades. Here I was the lightweight.)

There are 17 Post Offices or CPOs (discussed later) on islands inaccessible by bridges within the state of Maine. Three will be presented in this trio of entries.

We happened to make the trip that week in July during which USPS announced its closure study for 3,700 post offices as part of its "Expanded Access" (read: Many Fewer Post Offices) initiative, which put 34 Maine post offices in jeopardy. (During my last day in Maine, I visited three of those locations -- one of which is Portland's Station A.)

This is not about any of those offices. While each of the following facilities is in fact much smaller than most of those on that list, these are not run by postal employees -- they are Community Post Offices (CPOs), postal operations run under contract (and a subset of CPUs -- Contract Postal Units). CPOs exist where full-fledged U.S. Post Offices formerly resided, and many have been around for decades. The "new concept" of a Village "Post Office" (VPO) is like a CPO, but VPOs offer no real postal services. Those are designed to be as bare-bones as possible; it's a P.R. ploy. CPOs offer a respectable range of services and serve small, otherwise postal-less towns much better than their newly promoted [cheaper] alternative. (Of course true Post Offices, staffed by USPS Postmasters, are best; only they offer the full breadth of services that the Postal Service provides.)

That said, let's start looking at some nice post offices!

Here, what might be your initial mental vision of Maine -- sleepy harbors, boats and lobstermen -- would be spot-on. Upon arriving at the Five Islands harbor (which, of course, used to have a post office), we quickly realized that there's no easy way to get to MacMahan Island unless you're a local lobsterman or an Olympic swimmer. There are no scheduled ferries. Unfortunately, swimming with philatelic materials tends to result in the erosion of their quality, so we opted to find a boat.

A captain's phone number was posted at the side of a shack on the main pier. A phone call foreshadowed his arrival 15 minutes later. He took a rowboat out, started up his vessel of pride, and for $45 [which eventually became $60 -- returning to the boat I realized that I'd left my camera at the post office and had to run back for it, so the waiting time kicked the price up a tad...] the three of us were able to take the mile-and-a-quarter trip to visit the island and the MacMahan post office.

Here's a view of the harbor from the back of the boat: 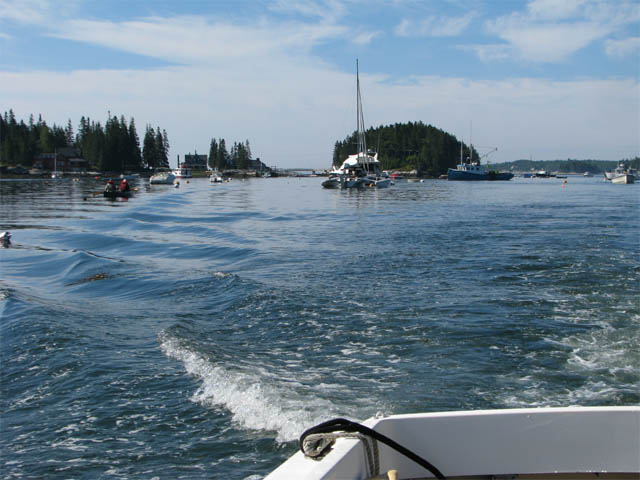 Of course, there are no roads here -- just unmarked trails through the woods. And our captain didn't know where the PO would be. Fortunately, someone was at the shack that is the Yacht Club, by the pier; he told us that the PO was the top of the hill, past a few houses, about five minutes away. Here's what we found:

This building is the MacMahan lodge and post office: 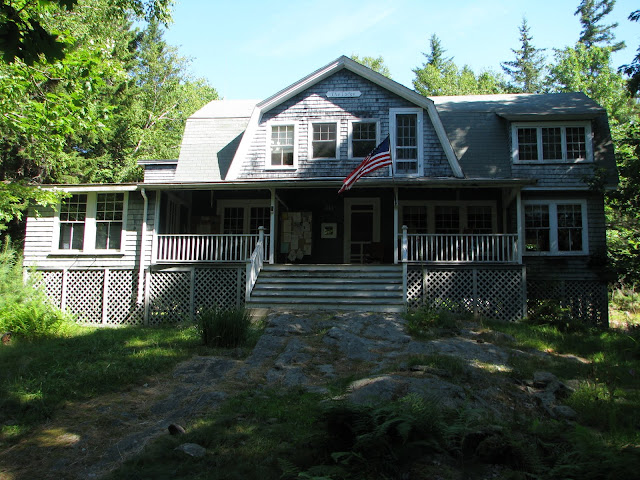 Here's the entrance. Make sure you see the sign above the door: 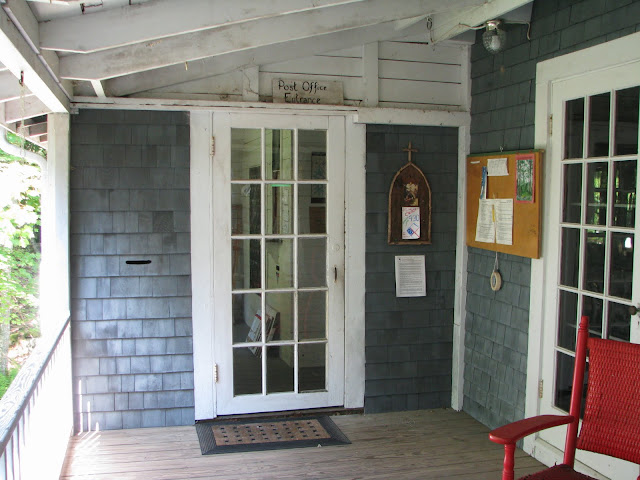 Inside were some of those nice old PO boxes that one would have seen back in the 1930s. There window was wooden and was shut for the day... Since the post office wasn't open at the time, we all took our photos, slipped in our postmark requests with philatelic materials, explored the lodge a bit, and scurried back down to the main dock.

Here's a snapshot of [part of] a map of the island, posted within the lodge. Isn't it fantastic? This is something you definitely don't see every day... Note the lodge and P.O.: 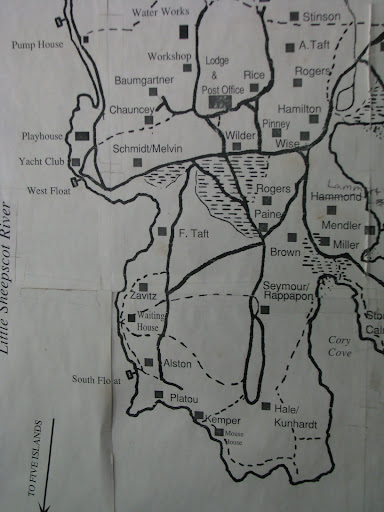 (If you really wanted to track our progress through the woods, we had docked at the West Float and made our way up the hill to the lodge/PO -- and back, of course.)

MacMahan used to have its own independent Post Office. For a while it was a Rural Station [former designation for a CPO] of the large town of Bath, about 14 miles away. It subsequently became a CPO of Five Islands -- when it still had a post office, and is now a CPO of Georgetown.