What to do... It's late afternoon in rural north central Maryland and one is expected to be at one's friend's place in Pittsburgh at 7 p.m., yet you're tipped off that a post office has recently closed in a small town a few miles south of I-70, and the beautiful postal façade still stands in the general store. I'm guessing the obvious thing to do is to put off meeting your friend and have dinner on the road, because I definitely had to see the post office that was literally imported from Pennsylvania. (From where? I don't know. If my research turns any further details about this story, I'll keep you 'posted'.)

Originally established as the Lydia post office on July 15, 1889 with first Postmaster John F. Rowland (and renamed Saint James on Aug. 1, 1946), the post office served the community until it was discontinued earlier this year, April 30, 2011. The last acting Postmaster was Carolyn 'Cookie' Kline, presently at the Keymar, MD post office. She served from 2002 to 2007. The office was subsequently headed by two O.I.C.s (Officers-in-Charge), the last of whom is now a clerk at the Cascade, MD post office.

The U.S. Census Designated Place of Saint James covers six square miles and houses more than 1,600 residents. The nearest post office is Fairplay, MD, a 2.4-mile drive away. (Saint James residents must now also use the Fairplay ZIP code.) Packages must be taken to Fairplay, though residents can pick up their mail at a cluster box in front of the store. (In the photo below, the boxes are obscured by the gray Hyundai.)

Most recently, the post office was housed in the Saint James general store, which also houses a gas station, hardware store, and a gun shop. There is also a "collectors" store next door. Given this, it's not as though residents would otherwise have to, and it's doubtful that they would prefer, to leave town to conduct their business, so the discontinuance of postal operations is disappointing. Here is the store: 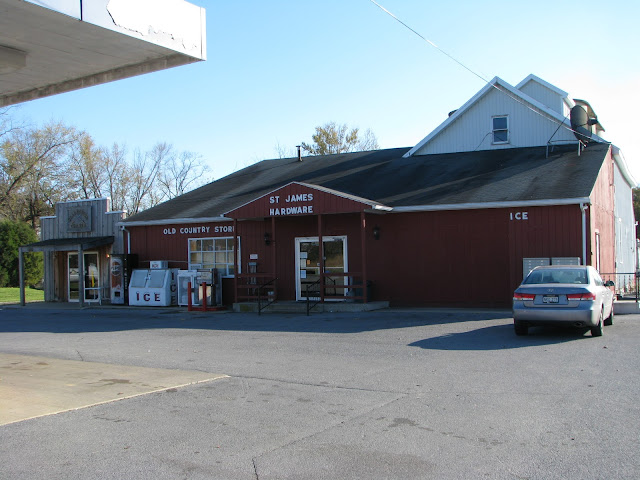 Here is the fantastic "imported" post office from Pennsylvania. Admire the craftsmanship and the woodwork, the old boxes, and the marble Money Order window. THAT's a post office. 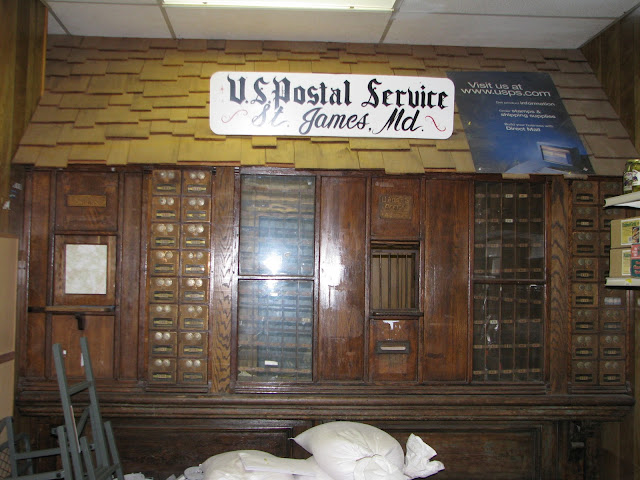 Here are closeups of some of the details: 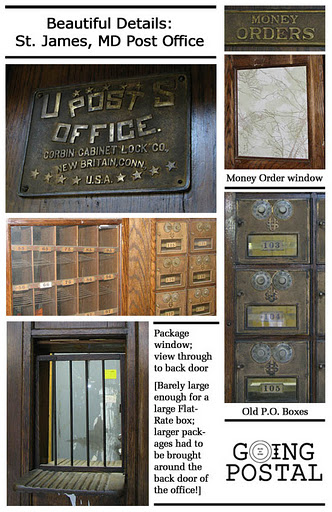 The most interesting detail was that the package / retail window (which measures approximately a foot square) was small enough such that packages larger than, say, a Large Flat-Rate Box had to be brought around by the customer outside and through the back door of the building. Similarly, large packages had to be given to the customer through the back door. How unbelievably quaint is that? (It's less of a security risk than you might think; the door has a peephole, and small-town Postmasters have this habit of knowing every local resident in any case.)

Furthermore, those P.O. Boxes aren't P.O. Boxes in the normal sense. They were actually General Delivery customer boxes (22 of which were in service before closure); General Delivery box owners, who had to live within a quarter-mile radius, had to come in during business hours and their mail would be handed to them only then.

The store is adjacent to a freight rail line. The post office itself was about 30 feet from the right-of-way. When trains rumbled by, this often caused the whole store to shake! I'd hate to be filling out my change-of-address form when this happened.

So you can get an even better sense of scale for the place, that package window, and the location in which it resides, here's a photo of yours truly: 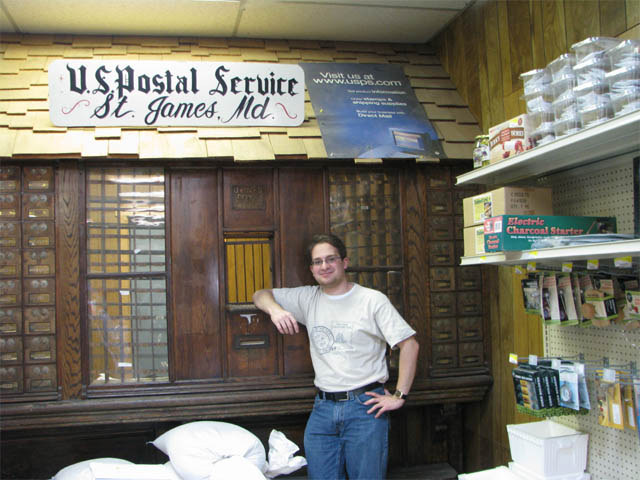 I was told that the general store, Shawley's, was hoping to apply for a Village Post Office to continue to serve its customers in any way that it can. They were in discussions with postal officials, but no official plans are in place at this time.
Posted by Evan K. at 12:55 PM