In 1995, Maryland's second-largest incorporated city heralded the advent of a new sectional mail processing facility. Smaller than a full-blown Processing and Distribution Center (P&DC), this P&D Facility (P&DF) housed 180 postal employees who were involved with the processing and cancellation of mail entering the mailstream from, as well as the distribution of mail getting delivered to, at least 60 217XX, 215XX, and some 267XX-ZIP-coded offices. The plant has been subject to a protracted two-year closure procedure which has gradually stripped away all of its responsibilities, and which will result in its final day of [diminished] operation this Friday, November 18. 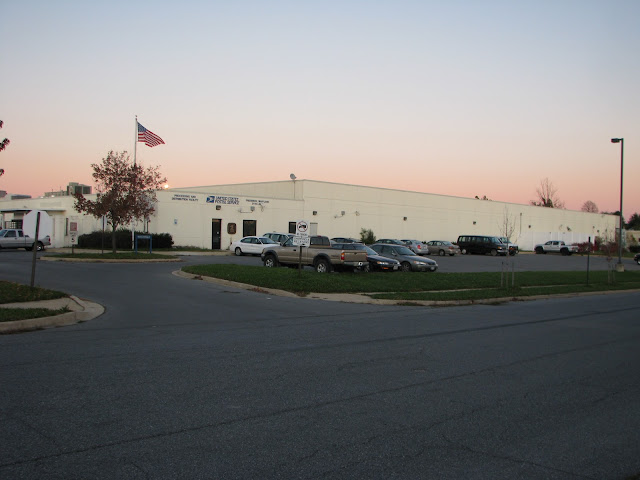 I recently visited the facility while touring threatened post offices of northern Maryland.

The facility is located in Frederick's Industrial Center East southeast of town, south of I-70. Its address is 1550 Tilco Drive, an industrial loop which features a number of auto shops and equipment companies. Near to the P&DF is a colorful attempt at an industrial strip mall which is largely vacant. The processing site, too, will be added to the real estate market.

The building itself is par for the course as far as the architecture of small USPS processing facilities: a squat, flat building approximately 300 feet square, for an estimated 90,000 square feet of overall floor space.

USPS shifted mail processing and cancellation operations to the Suburban Maryland processing plant by July 1, 2010, although consolidation with the Baltimore processing plant is the end result of the operations transfer, which was approved this August 3. In Frederick their machinery is gone, and distribution to local offices has been phased out since Columbus Day. When I recently arrived at the facility, there were a handful of cars in the lot. Again, the plant closes for all time this Friday, November 18.

Mail that would otherwise be processed in Frederick and stay within Washington County, MD still arrives overnight according to USPS's Postal Price Calculator, though I question whether service to portions of Pennsylvania suffered; a letter being sent from Frederick, MD to Altoona, PA, 130 miles away, or to Harrisburg, PA, 70 miles away, arrives in two days. I do not know what the service standard was before the shift to Baltimore, but mail originating in Baltimore receives the same treatment.

Of those 180 workers at the Frederick plant, nearby Hagerstown's newspaper the Herald-Mail states that workers will most likely be shifted to Baltimore's larger processing facility, which is 50 miles away. Of course, they aren't the easiest 50 miles for mail trucks when Baltimore traffic and Maryland hills are involved; but I digress. Some workers could be transferred to closer-by post offices.

Here is the main entrance (or at least, that for visitors) of the building:

Philatelically speaking, since the P&DF no longer processes mail, it has no cancelling devices, although it still possesses one black-inked round dater which is unique to its 21704 ZIP code; it says "Frederick MD 21704"; there is no indication of "P&DF" or the like.

USPS closed, -- rather, consolidated -- the plant due to what it claimed were $4.2 million in annual savings. Of course that number is not without dispute, but I don't know the details. Some against the change: "There are numerous reports across the country about the botched attempts of consolidations at other facilities," the workers wrote, citing audits by the U.S. Office of the Inspector General. Part of the justification for the Frederick closure involved workload declines; regardless, at the end the plant still processed nearly one million pieces of mail a day. (These figures, once again, are from the Herald-Mail article.)

The author's back-of-the-envelope calculation (est. 160 workers transferred * est. 350 work days a year * extra 100-mile commute / average 22 mpg * est. $3.50 per gallon of gasoline) suggests that savings realized by the postal service result in the transferal of nearly $900,000 in direct out-of-pocket expenses for affected postal workers in fuel costs alone. (Not to mention the wear and depreciation incurred by putting one's car through an extra 30,000 miles of driving per year.) Of course, there are additional transit costs incurred by USPS's fleet to bring all the mail down to Baltimore and back. I also suspect it will inhibit other mail processing, such as bulk mail. (Which to some might not come across as the biggest sin.) I don't know enough about parcel processing.

Further details of the Area Mail Processing study about Frederick can be found here -- note that there are two listings for Frederick, one for originating, and one for destinating mail, along with those from processing plant studies across the country.
Posted by Evan K. at 5:34 PM