To get a good semblance for what this photo journal is about, I suggest exploring the Favorite Entries at the left side of this page.

I would like to commemorate two special occasions this fine November 30th: First, my father's birthday. My father was the man who inadvertently got me into the hobby of postmark collecting. He's been collecting postmarks and visiting post offices since 1960. I must confess, my first impression of the hobby, as a kid, was one of pain endured while waiting in the car for him to stop in post offices and get cancels during our family vacations. I wanted to start playing Mini-Golf already! He also spurred me on to my first attempt at obtaining a postmark at the age of 15 in Northampton, MA, while I was up in the area attending a summer math program. This was also my first unsuccessful attempt at obtaining a postmark. "We can't do that," the clerk at the counter told me. Lies.

During my post-college, all-American cross-country road trip of 2008 (which my father helped finance), I thought it would great to drop by some post offices near where I had some memorable experiences, thus documenting my trip and getting him some new postmarks. By the end of the trip I was hooked on the hobby, traced a postal path clear across the country, and presented him with a stack of 250 postal cards, each cancelled in a different town. He says it was the best present he ever received. (Even better than that mug I got him for his birthday during my freshman year? Fine.)

(And I've got a lot to be thankful for in this regard, don't I? After all, there's the fact that you're here reading this now!)

Second, I would be remiss if I didn't commemorate an important occasion in the life of my stalwart traveling companion: my 1999 Toyota Camry. (Let's put it this way: humans with both the time and postal wherewithal are difficult to come by.)

On November 28, 2011, at 3:02 p.m., my Camry traveled its [her?] 100,000th mile. The setting was the majestic [cough] West Shore Expressway of Staten Island, just south of Victory Boulevard: Exit 7, and approaching the site of the Great Kills garbage dump (now park). There isn't even a post office there! Perhaps 150,000 will be more photogenic. My Camry has helped me explore 42 U.S. states and four Canadian provinces. I fully intend on driving it to Alaska some summer. 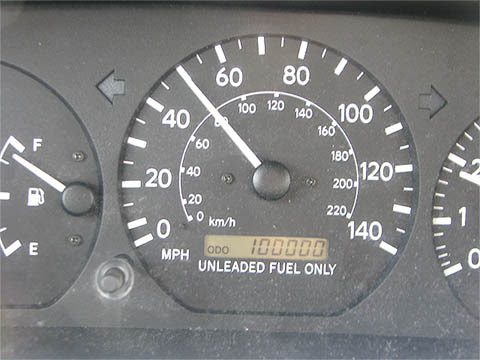 (Yes, I was still watching the road.)