(For those who missed, it, Part I is below on the homepage, or at this link.) 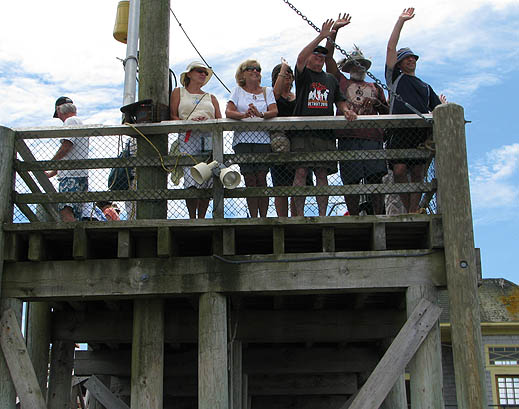 One of the wonderful things about USPS's pictorial postmark program is that any small community around the country can receive its 15 minutes of fame with publication in USPS's biweekly Postal Bulletin (and Linn's Stamp News).

For example: When USPS unveiled its popular Pixar-themed stamps this summer, one little island in Maine, as well as several towns across the country -- including the town-of-135-people Woody, CA -- were graced with their own limited-time pictorial postmarks which folks from all over the world mailed out for:

With these special cancellations, USPS was very clever -- commemorating Toy Story in Woody, CA? Right on. What about the Up stamp, featuring a dog? Why in the world would they give it to Squirrel Island, ME? It's actually exceedingly clever, and hopefully this brief YouTube clip [opens in new window] will help shed some light on why. That clip tends to repeat itself a lot in this film.

The three postal tourists headed to Squirrel Island the same day we visited MacMahan. We spent a bit of time exploring downtown Boothbay Harbor, and had lunch at a hot dog truck while we waited for the next ferry. Fortunately, in this instance, a ferry does serve the island. It's a few-dollar, half-hour trip from Boothbay Harbor.

The ferry agreed to wait a couple of additional minutes at the island while our trio walked the couple of minutes to the office and snapped our photos. The P.O. itself had already closed for the day [it's open from 10 to noon], which probably worked in our favor since we would have felt like chatting.

That all said, let's have a look! 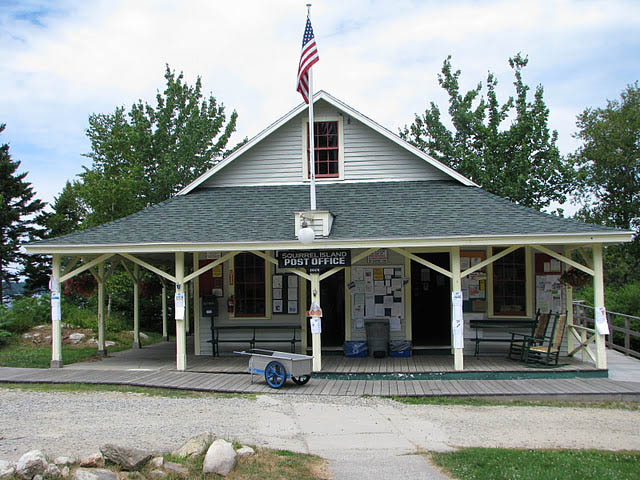 Absolutely beautiful. You'll note the wagon out front; since no cars are permitted, Squirrel Island residents use wagons that they'll wheel around with groceries, luggage, and whatnot. (Reminiscent of an earlier experience on Fire Island -- see third photo. [Opens in new window.]) Residents leave their wagons on the pier:

The 'Ora S. Dodge' post office is one part of the de facto community center. Women had gathered inside the other end of the building and were discussing news of the day. The building also features several community bulletin boards, a couple of benches, a fire extinguisher, and an emergency phone as one might see on a college campus!

Here is the front of the post office. I suggest looking closely at the Ora S. Dodge sign and appreciating the adornment. As I've always said, post offices are a mark of community pride. 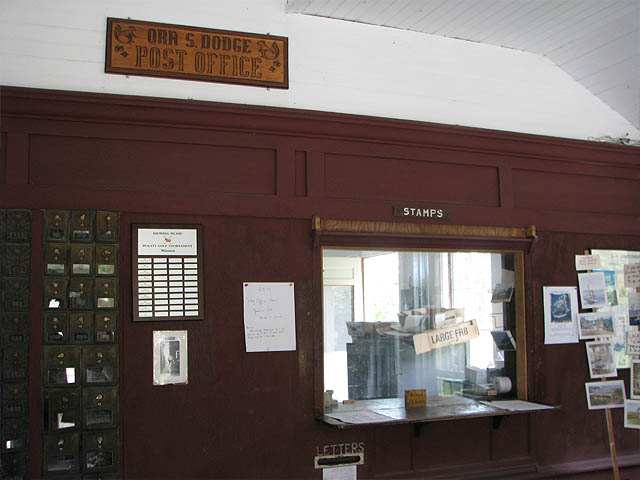 You can see a couple of the aforementioned items by the beautiful, old-style mail collection box. To this day I've seen fewer than ten of them in my travels. 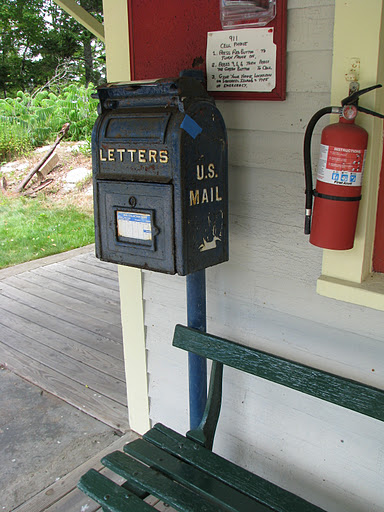 (Note: You can see more examples of pictorial postmarks, including the above, in this Postal Bulletin. Click down to the Stamps / Philately section. This happens to be a particularly thorough edition.)

You can read more about Squirrel Island here.