The thought should have occurred to me to write about Rozet earlier. It was one of my first postal experiences while I was exploring the country during the summer of '08, and to this day I would still call it the most meaningful. (Not to mention it's nice having people visit your blog, and several hundred of you have done so by searching "Greenville, PA post office" after my touting of it on NPR. I'm sure several hundred more have also tried with "Rozet, Wyoming post office".)

I have quite a lot to be thankful for this year. Not only the fact that you're all here, actually reading this (thank you to the fantastic writers and editors at The Washington Post, Time, NPR, and Save the Post Office, as well as to several other outlets to be unveiled shortly). Thank you to those who have contributed, through comments or email: photographs, suggestions, and your own meaningful post office stories. Keep 'em coming! This year I've not only started to do interesting graduate work at the University of Pennsylvania, but I've been able to make the time to visit more than a thousand post offices -- getting postmarks, taking photographs, meeting some very wonderful people, and learning many unique stories.

I know that millions of you nationwide are thankful for the fact that your community is [still?] served by a U.S. Post Office. Remember, the U.S. Postal Service's core mission, by its birthright, is to serve us; it was founded to bind our country together -- and this means all the communities of our great nation. Its mission is most certainly NOT to be profitable in every small town or non-affluent community: it's the U.S. Postal Service; not the U.S. Postal Business. I ask that you do not take this distinction lightly.

But back to Rozet...

Let's explore this corner of Wyoming. I suppose it's best to do so the way I did it: starting with Devils Tower, our nation's first National Monument. That was one of my intended destinations for my cross-country road trip; it fit in-between the Badlands of South Dakota and the wonder that is Yellowstone.

But to fully comprehend the story behind Rozet, Wyoming, you need to understand Devils Tower: 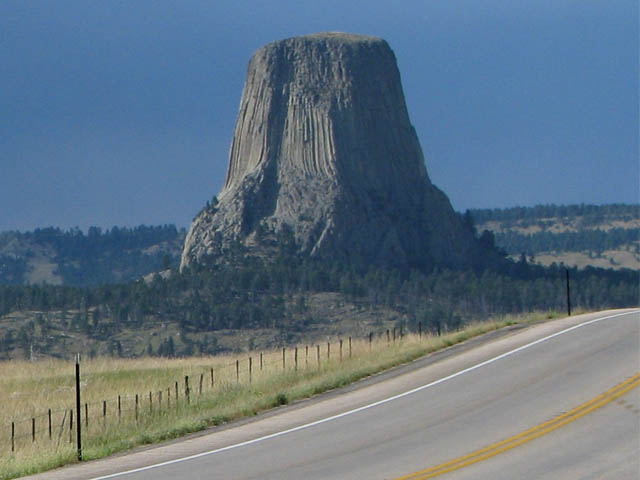 What is now one of the recreational climbing meccas of America has been a sacred location for Native Americans for centuries. Many tribes' legends pertain to bears -- the "Bear's Tipi" is a common reference. Many tribes' legends and rituals are kept private, but you can learn more about Devil's Tower as a sacred site here. The site was formed about 50 millions of years ago -- underground -- as an intrusion of magma that bubbled up, separated the sedimentary rock, and solidified. The hexagonal columns you can still see are a result of the cooling of the molten rock. Scientists believe that the formation was exposed as the covering rock was worn away within the past couple million years. Experienced climbers can register and go up; an experienced guide can lead you up for $250 (at least back in 2008). The National Park Service provides an FAQ about the site. The total height of Devils Tower, from base to top, is 867 feet. Approximately 4,000 visitors climb Devils Tower every year.

I write all this so you can appreciate what the Postmaster in Rozet, WY gave to me. But as for Devils Tower, which became our nation's first National Monument on September 24, 1906, a post office was established in 1925: 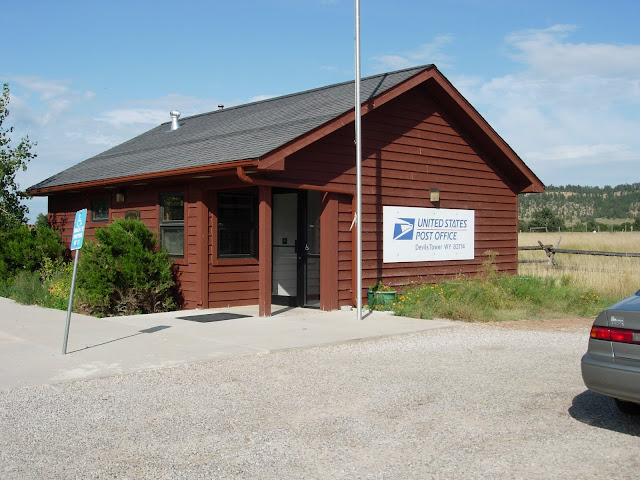 On to Rozet:
Here's a photo from a railroad overpass, showing the town of Rozet, several miles away, in the distance. If you can look closely, you can even see a coal train making its way from one of the coal mines around the large town of Gillette. 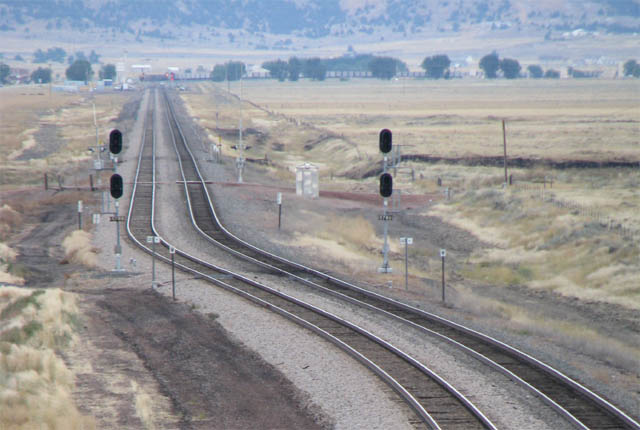 Postmaster Bruce Redfield has served Rozet since 1990 as an Officer-in-Charge. He's been Postmaster since February 23, 1991, and as I stated over the air, he was responsible for "servicing" a set of seven commemorative, limited-time, pictorial cancellations honoring Devils Tower. (That is, post offices around the country can commemorate events by using postmarks that aren't just circles, but which feature images -- they're available for a limited time, but you can find out about them through Linn's Stamp News or USPS's Postal Bulletin. You can mail items, bearing proper postage, to be cancelled at that location, which will then be mailed back to you ("servicing"). Generally the time window to obtain such special cancellations is 30 days.)

I've gotten dozens of pictorial cancellations, but this was different: Postmaster Redfield literally climbed the sack of mail with thousands of people's requests for postmarks from all over the world, and applied the postmarks ON TOP of Devils Tower. He had the sack of mail on his back while he climbed that 800-foot, vertical-walled behemoth. That is astounding in and of itself. 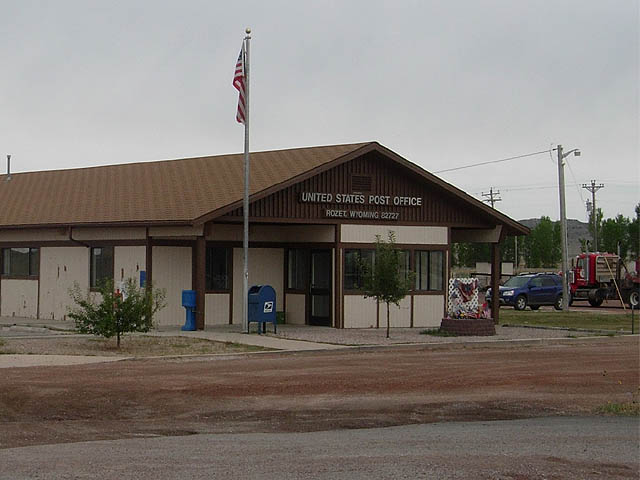 So when I stopped by Rozet, stated that I drove out from New York and that I wanted his postmark, not only did I get a standard Rozet postmark... he saved a special set of those envelopes ("covers") which he had carried to the top of Devils Tower, each with a different commemorative pictorial postmark on it, and he gave it to me. It was incredibly generous and meaningful, and so I thank you, Postmaster Redfield, today. The envelopes are in a safe place.

This day also included experiences at other offices in northeastern Wyoming, which I detailed in my fourth-ever entry for this blog: As Rural as it Sounds -- Recluse, Wyoming, et al. This was the very day that my appreciation for post offices first took hold, and during which visiting them became an integral part of my overall experiences while exploring America.

Here's a parting scene of some of the residents of Rozet. I'd never seen antelope before! 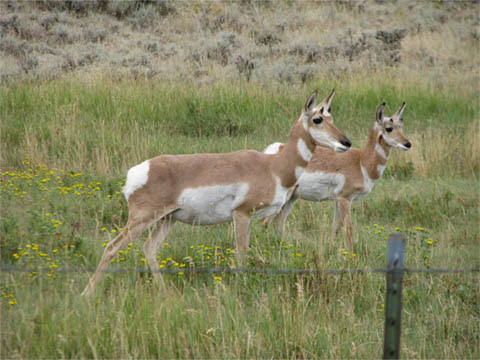 Followup: 11/28/11 10:47pm
This quote is taken from a comment left below the NPR writeup of the All Things Considered piece. His perspective of the story is fantastic, and I thank him for sharing:

I am Proud to be the climbing guide that was privaledged to take the Rozet, Wyoming Postmaster Bruce, to the top of Devils Tower, for the Special Hand Cancelation of the envelopes. It was in 2006 and Devils Tower was celebrating its 100th anniversary of being a National Monument. The Special Cancelation was set for July 4th!!! The Post Office collected mail,for anyone who wanted that Special Cancelation. We started our climb to the Tower Top that afternoon, arriving at sun set. Bruce had me haul a large cutting board, along with all the mail, so that he had the Best possible place to work. And work he did; hundreds of envelopes, each carefully stamped and cancelled!!! We were able to enjoy the view, looking DOWN at the local fireworks going off BELOW us!!! AMAZING!!! When the fireworks were over and the cancellations were completed, we rappelled down, with the headlamps on. What a Wonderful Night.

The Real Story is Postmaster Bruce!!! He CHOSE to do the job himself, although he had never climbed before. He trained with me through several weeks, learning to climb! On top that night, his feet barely touched the ground! He radiated American and Postal Pride. It is a Huge Shame that his Post Office is slated for closure...

(Rozet's post office is not presently being studied for closure; but I could see why one might think it was, given the context of the article.)
Posted by Evan K. at 10:27 AM