The Postal Bulletin announces that the post office at New York's La Guardia Airport saw its last day on December 31, 2010. It's another one that was expected, since it had been on the consolidation 'Hit List' for over a year.

I was questioned by Postal Police for taking these photos in September '09 and warned that I couldn't publish them. Now, as a New Yorker I'm as concerned about security as anyone; but since the post office is now closed and these photos no longer pose a perceivable threat, here we go!: 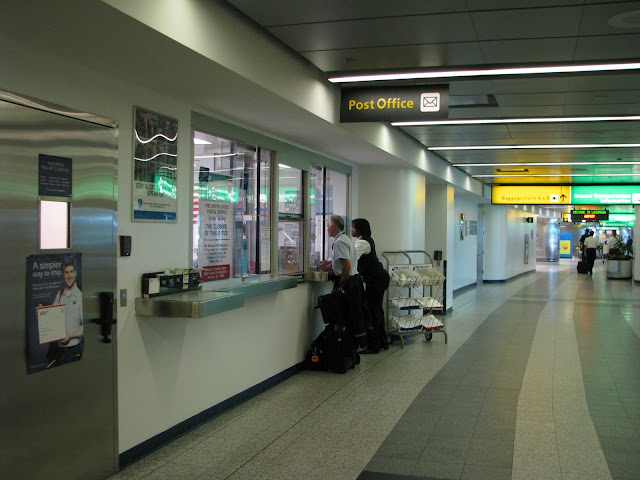 Airport post offices have been easy targets for closure by the postal service since they don't service or represent residential communities, and so people are less attached to them. In fact, the post office at Hartsfield International Airport in Atlanta -- which was usually open 18 hours a day and held hours seven days a week -- was discontinued just two days ago! (Jan. 31, 2011.)

The facility seemed to be used by pilots and other aviation staff members, as well as businessmen catching flights. The post office took in $120,000 annually. Here was signage noting the possibility of closure at LGA back in 2009: 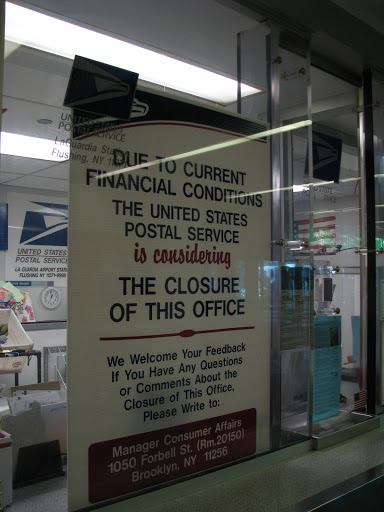 For the record... The address represents the USPS Triboro District office; it is in charge of Queens, Brooklyn, and Staten Island post offices and mail processing. Its spray-on cancel reads "TRIBORO NY 112 // BKLYN QNS STATEN ISL // [[date]]"; 112 being the three-digit prefix for offices in Brooklyn only. (The Triborough Bridge in New York City, for the record, connects Queens, Manhattan, and The Bronx! This "Triboro" exists in postal name only.)
Posted by Evan K. at 1:43 PM