Save the Post Office is a fantastic website that details all you could ever want to know with regard to keeping your local post office open. This entry discusses the ways in which I've determined I would like to "save" post offices -- that is, preserve their memories through physical items you can actually obtain from your local post office before it closes. I'll share why it matters to me and how you too can get involved.

If you'd like to contribute your own postmarks / stories / signage, allow me to recommend getting in contact with (or joining!) the non-profit Post Mark Collectors Club (PMCC), a group for which I've volunteered for a couple of years now. It maintains a fantastic philatelic museum in Ohio, featuring at least two million postmarks. (That's where the signs and my printed-out photographs go!) Or, get in touch with me and I'll think of something. This is not intended as a shameless plug, I swear.

Above: Postmark from the discontinued River Street Station, Paterson, NJ. Obtained while driving from NYC to Ohio.

Why postmarks? They're really small pieces of history. This mail-piece was in X place on Y date, and the postmark proves it. My father's been collecting them since 1960 and I've more than doubled our collection over the past three years. We now have 8,500 overall, from every corner of the country. Of special interest are last-day postmarks, from the final day of operation for a post office that is discontinued or suspended. The difficult part has been to find out about postal closures in advance; while the [old] Post Office Department used to announce them in advance, it is now exceedingly difficult to obtain a national list with such information. Since it's public information anyway, this development is disappointing.

So if you'd like to help either my father's-and-my collection or a real-life museum, please let me or the PMCC know of impending closures / suspensions or actually forward us an item with a last-day postmark on it! I might inaugurate a PO Box for this purpose.

Every post office has a hand-cancellation device [that is not always, but should be] unique to its facility.

1b. Postmaster Autographs
Postal employees are allowed to accept or decline requests for autographs at will, so long as they do not discriminate to whom they give it, and so long as they do not accept anything of monetary value in return. My father and I now have autographs from about 1,500 Postmasters / OICs / PMRs alongside their appropriate postmarks. (Generally, I draw the line for autograph eligibility at "presently at the helm of an independent post office" -- though I have been known to obtain signatures from an especially memorable clerk on occasion.)

Once an especially cool Postmaster signed the card for our collection along with her clerk and rural carrier. I've also gotten autographs from [Postmasters] James Bond and Marge Simpson!

2. Photographs
Don't let the rumors scare you. It is not true that "it is illegal to take a photograph of a federal building." You can take a photo of whatever you darn well please so long as you're on public grounds, and you can see anything using Google Street View anyway. Snap away! (If you're out on a street anyone has the right to ask you what you're doing, but no right to impede your photography or confiscate your film. When I visit POs I always go in and get my postmarks first so Postmasters know my story.) Taking photos inside is a different story -- let's not go there right now.

Below: The Massey, Maryland post office is in danger of closing. 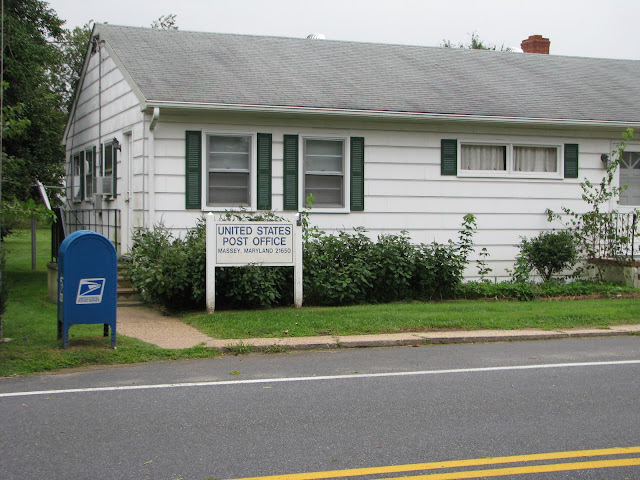 The PMCC Museum has what I believe is the world's largest collection of post office views (old postcards, etc.) and printed photographs: more than 50,000 in all. It's quite astounding! You can submit your own photographs to myself or the other webmaster at postmarks.org; we've got a two-year backlog but will definitely get to them all eventually.

3. Stories
See if you can learn about the history of your local post office. In small towns, Postmasters often know a lot about it, or can direct you to someone who can. Feel free to share the information with me, and I'll do my best to both preserve the memories or even feature your stories here! My efforts have yielded a couple hundred fascinating name origins and stories from all corners of the nation.

4. Physical postal signage
There are certain items that you can never legally get your hands on, like blue USPS collection boxes. (It's in a postal manual that they must all be impounded and recycled or sold for scrap metal.) However, some other non-sensitive items from discontinued facilities can be sold off. Items like site-specific postal signage (along the lines of "U.S. Post Office // Wonderful, Wyoming") are semi-restricted; they will usually be destroyed, but can be donated to recognized non-profits under certain conditions! The organization I volunteer for, the Post Mark Collectors Club, qualifies, and I've been able to get two post office signs donated to the group's museum for preservation.

I was going to write about the exact procedure, but let's just say it's in USPS's handbook AS-701: Materials Management. Essentially, you need a formal written letter from an officer of the non-profit stating the item and intent, and permission needs to be granted by an appropriate local official as well as the USPS Postal Historian.

Here I am holding the sign from the discontinued Malone, WA post office -- the first post office to be replaced by a VPO. The sign currently resides in the PMCC Museum. Again, it's a piece of history. 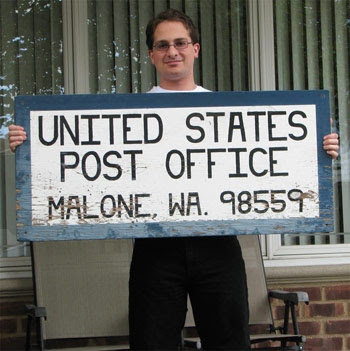 A second sign, from the Wissinoming post office in Philadelphia, took me several months to obtain. It will be brought to the PMCC Museum as soon as I finish having it examined at the UPenn School of Design preservation department. I knew it had to be preserved as soon as I saw the post office last December: 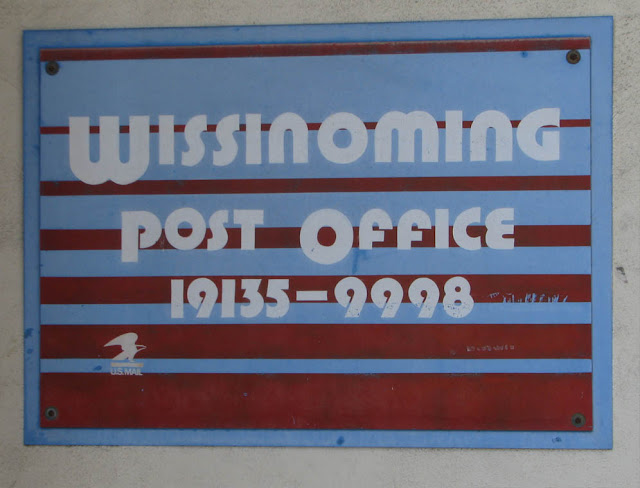 My thanks to the wonderful people at the Seattle District, Philadelphia post office, and at the Historian's office in D.C. for allowing these signs to be preserved at our museum!

Which sign would you like to see preserved, were it to close?
Posted by Evan K. at 2:22 PM