I've been spending a lot of time in New Jersey lately; as such that's the subject matter of the bulk of my recent entries.

These photos were all taken one morning last month when I drove down to Philadelphia. They lie in the corner of New Jersey just off the southwest tip of Staten Island, New York. In fact, all four offices lie within this map: 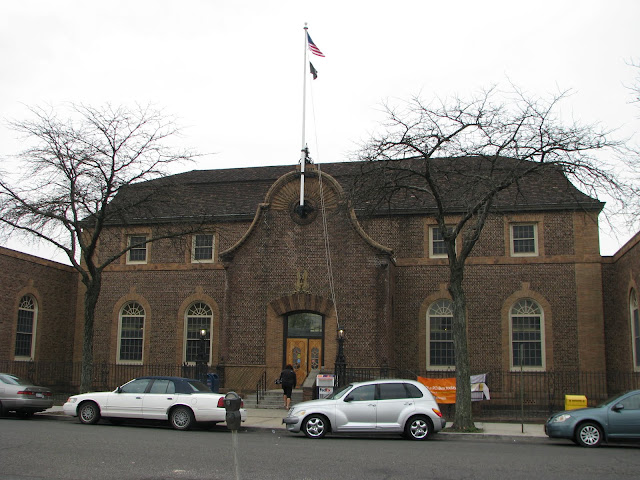 The Perth Amboy post office dates from the early 20th century, and bears many artistic flourishes. Note the brickwork by the base of the flagpole, and the metal eagle (around which are the words United States Post Office). Inside are Art Deco light fixtures and wonderfully unique golden wall tiles. There are also nuanced little tile sculptures featuring airplanes and other modes of mail transportation.

Keasbey's post office was relocated in the mid-2000s, and a fire burned through the site of the former building a year after it moved. It only occupies the ground floor, but as new offices go, this one's fun to look at.

In the back of an industrial office park, Edison's Raritan Center post office can be difficult to find and is little known by the general populace, but very well used by workers nearby.

Fords: Common design for a mid-century office, but a nice one nonetheless. The signage font is a little more bold than most post offices of this character. That might be because the letters are plastic. If that is the case it might explain why the "0" fell off the ZIP code.
Posted by Evan K. at 10:41 AM