In the town of East Haven, CT (a suburb that is, remarkably enough, just east of New Haven), USPS had the incredibly stupid idea of attempting to close the Trolley Square post office, which is located in a strip mall in the center of town. This will have been one of only a few Consolidation 'Hit List' finalists that have been saved. Here's the scoop:

There were two post offices in East Haven. Well, two facilities: the Trolley Square retail branch at the center of town, and the East Haven Branch carrier facility, which is north of the Interstate. (They are both considered branches of the controlling New Haven post office.) A shows Trolley Square, and B shows the East Haven facility. [Update, 2017: The Google Maps code is no longer valid, and I have removed the map.)

Located at 151 Frontage Road, an address whose position is agreed upon by no two internet major mapping services, the East Haven facility was a remarkably difficult find for this seasoned post office hunter. Its exact position is, alas, within that little 'hook' that leads you to position B at the map above.

So, USPS planned to go all 'Wild West' on the town of East Haven and tell its residents that the town wasn't big enough for the two offices. Okay, it's most probably true. Thus they decided to keep the huge carrier facility and shove the retail operations inside, allowing them to ditch the small finance (retail) office. That's a common move around the country. Okay, but it's just a terrible idea. Let's see why.

In addition to making access to basic postal functions inconvenient for everyone, senior citizens would have been especially impacted by the move, which would have taken operations from a central point in East Haven across Interstate 95 and its service roads, to a remarkably inaccessible location with no sidewalks or direct public transportation access. In fact, the seniors protested, demonstrating how difficult it would be for them to access the facility. This story features a video. This letter by a Connecticut State Senator demonstrated continued support for the Trolley Square post office.

In the end, USPS decided to keep retail in East Haven and instead close its carrier facility. Essentially, everything stays the same for the customer but the carriers move elsewhere. Good, because it was always the logical thing to do! I wasn't able to find any sources, but it's my suspicion that carriers were moved to the New Haven Main Post Office, where I suspect a decline in workload made space available for the East Haven folks to move in. This September 2010 real estate listing shows the discontinued USPS facility. Visiting the location last weekend, I looked through the front door to see that the building was dedicated in 1991. A shame, I suppose. 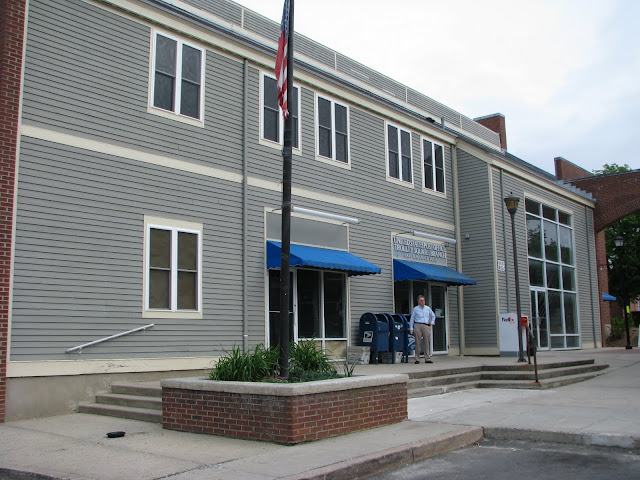 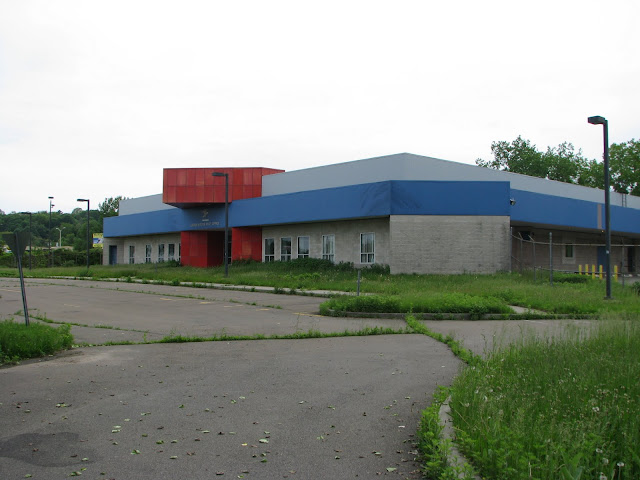 P.S. For more than two years, the Trolley Square post office has been inaccurately located on the USPS Locator tool: it is the 12th closest office listed to East Haven, CT, listed as being in New Haven, about 4 miles from East Haven. That's three pages of sifting for the proper location. Tsk.
Posted by Evan K. at 8:25 PM