To my knowledge this is the first outlet to publish this information! That might be because I was able to pick up on this in person earlier this afternoon. It also apparently means my blog's an outlet now.

(Perhaps what you're about to read is a solution to USPS's monetary woes?)

If you've been to a post office within reasonable bounds of civilization, you've probably seen the computerized system, known as POS, that takes care of every conceivable operation that a postal clerk needs to do on a day-to-day basis. In this case, what's important to know is that the system is used to scan the back of stamp sheets being sold in order to ring them up for sale. That is, it reads barcodes and places the cost on the screen. The machines are rather sophisticated: they're coded not to allow the sale of an item before X day, not to allow it after Y day, and so forth. They require an Internet connection to the outside world so that they can obtain their data from a central USPS server. They're basically on a universal standard.

(These machines are now so pervasive in the postal service's operations that offices have been known to completely shut down if their POS machines weren't working that particular day. In two instances I've been to post offices that didn't even let customers into the building, when they were supposed to be open. To be fair, that is a pretty rare occurrence.)

So, someone who codes at USPS screwed up: the brand-new set of four stamps honoring artist Romare Bearden, which were released for sale today, happen to come on a sheet of 16. If you've bought a sheet of stamps recently you know that most designs come in a sheet of 20. Well, if you tried to buy a $7.04 sheet of 16 stamps at any post office that uses the electronic POS system, it wanted to charge you for 20 at $8.80. By default; it's just the way these machines are. I'm guessing that in some cases it succeeded: if neither you nor the clerk knew about or remembered the error, then you could have gotten ripped off to the tune of $1.76 per sheet of stamps.

Fortunately the system can be overridden, so there was a solution that clerks nationwide had to put into practice all day: Scan the barcode on the sheet, say the customer's really only buying one stamp, but then multiply that $0.44 by the 16 or however many stamps the person is actually buying.

The postal service was aware of the issue and from what I hear issued a nationwide memo to all of its postal Districts. My research finds that individual offices were notified at different times: one reports receiving a fax early in the morning Tuesday (the day before the stamps went on sale), one area notified all its offices this [Wednesday] morning at 8:00, though another was notified this [Wednesday] afternoon after its District was notified of scanning issues at other locations. Since every clerk had to manually override the system in every instance regardless, it's possible that a few forgot.

The stamps are of a nice design. Here are the four distinct stamps: 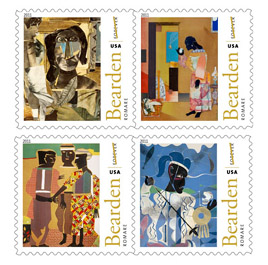 ** Reports indicate the paper used for this stamp is 'glossy', so hand-cancellation ink fails to absorb and bleeds across the surface of the stamp. **

A fix for the issue is on the way. A source at the managerial level tells me the issue should be resolved by tomorrow; the "Universal Source" is supposedly sending out a software fix this evening.

My question is, if this was known beforehand: Why in the world can't USPS change a single number in a computer somewhere to fix the problem for its offices around the country?
Posted by Evan K. at 7:11 PM