I Can't Believe It's Not Idaho!

This weekend was the Post Mark Collectors Club's 50th annual Convention, and this year it was held in Easton, MD. Which is a good thing, since it's only about two and a half hours from school; much further and I wouldn't have been able to make it this year. That said, I've been busy with post office runs and with actual work, so my next couple of entries might be a bit short. Never fear: I do have a couple of positively fantastic postal tales from this weekend, however, and they will be up when I get the opportunity.

Okay, so Delaware. Until a month ago I'd only been to one post office in the state. As of yesterday I've been to about 30% of its offices. It's actually not too difficult. With less than a week's worth I'm sure one could visit all the offices in the entire state, save perhaps that on Dover A.F.B.

Believe it or not there are agricultural elements to this small state. About 30 miles south of Wilmington and 20 miles north of Dover, there's a small farming community called Townsend. I swear, this scene is a dead ringer for parts of Idaho. Combine that with the lighting and you get one photogenic scene. 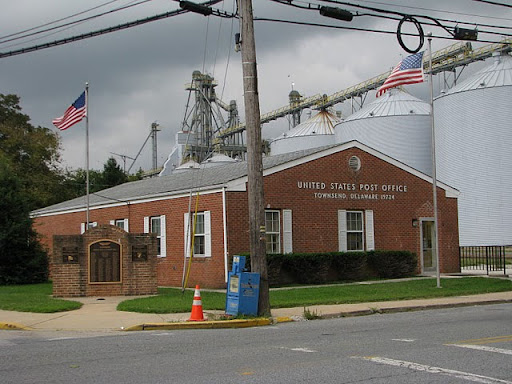