For the Record: What's a Carrier Annex?

(Folks can get full information about Carrier Annexes, at least if they know where one is, or if one's mail is delivered from one, by using 1-800-ASK-USPS, selecting option 5 from the main menu, stating "delivery offices", and entering the ZIP code in question. These locations' addresses are also noted on USPS's published Leased / Owned Facilities Report. So what I'm posting here, while not commonly known, is not really sensitive information. The photos I provide here are solely of the buildings' fronts and taken from public roads. For the record, the fantastic resource that is the Post Mark Collectors Club (PMCC)'s impeccable Post Office Directory notes the existence of annexes.)

The postal facilities with which most of the American populace is familiar are USPS retail facilities -- Post Offices, classified branches and stations. Of course, USPS involves the delivery of mail as well as its intake. Excluding the world of CPUs, P&DC/Fs, Vehicle Maintenance Facilities, and other various postal knickknacks, of interest in this entry is the delivery operation, which is often conducted at a postal Carrier Annex. Many post offices will have both retail and carriers in the same facility, but sometimes these operations are separated. Retail-only urban locations are often called Finance Stations, and carrier-only bases are called Carrier Annexes (or, at times, Detached Carrier Units).

Since not many people get to see them, I thought it would be fun to show a couple and explain how they can come to be.

Standalone Carrier Annexes
A good example of a standalone carrier annex is Connecticut's Guilford/Madison Carrier Annex, which lies between the two pleasant towns on the state's coast (south of I-95). Constructed in 2000, it is overseen by the Guilford Postmaster and is responsible for the delivery of mail to two towns. 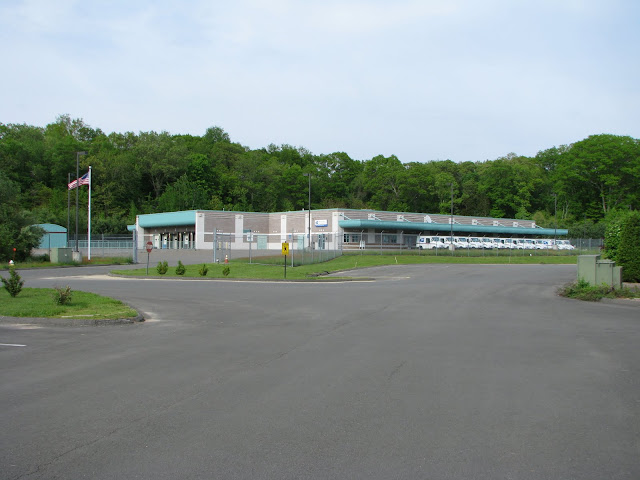 I don't believe there's customer package pickup at this location.

Similar to the Guilford/Madison Annex, this serves multiple towns, and it reports to the Saco post office. Based on what I saw there is no passenger pickup at this location. 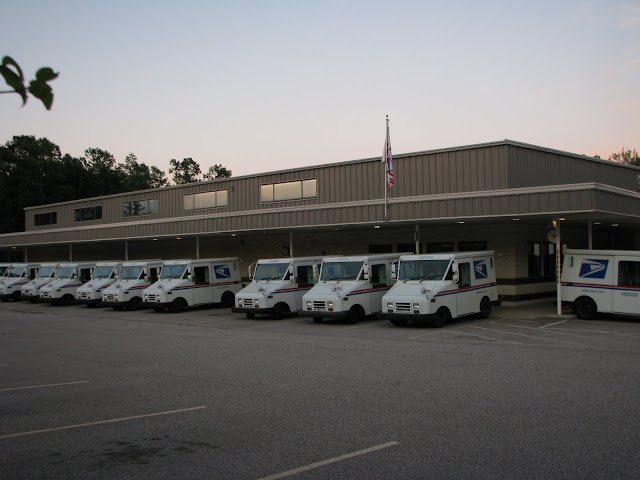 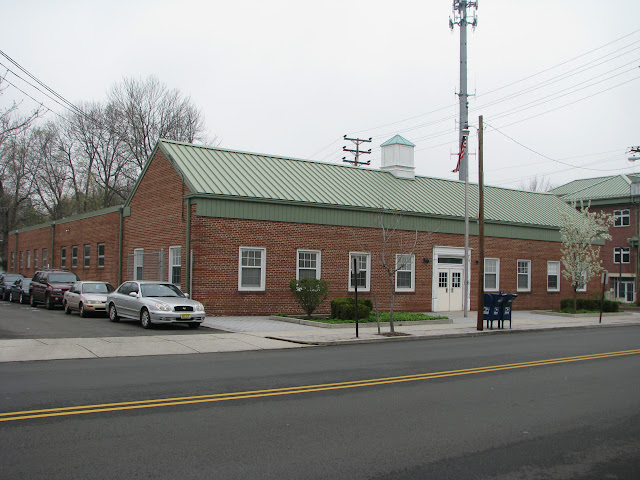 There is customer package pickup available at this location. 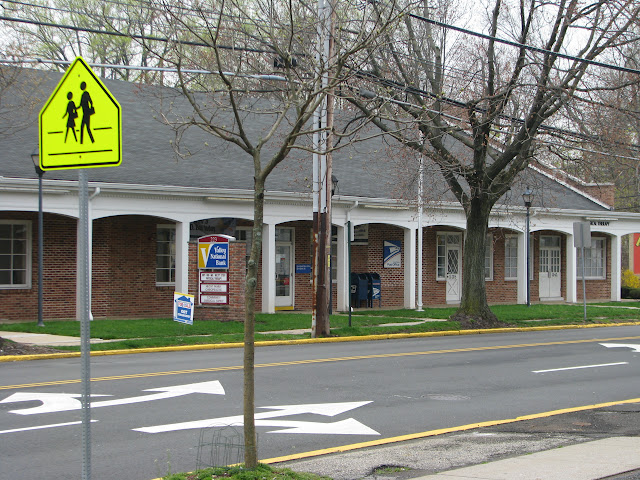 In large cities it is often the case that a classified station, which used to maintain both retail and carriers, has split into two operations. One great example is my favorite carrier facility, the Ryder Carrier Annex in Brooklyn, NY. I wrote all about that in this GP entry. (If you haven't seen that entry before, check it out -- I promise it's worth it.)

Several such splits have occurred in the Philadelphia area, wherein the retail operations of at least three post office stations bubbled off and left their carrier operations behind. One is the Fairmount Station / Carrier Annex, both shown in this post. Another is the Roxborough Carrier Annex, which, as seen from the signage, used to be a full Station: 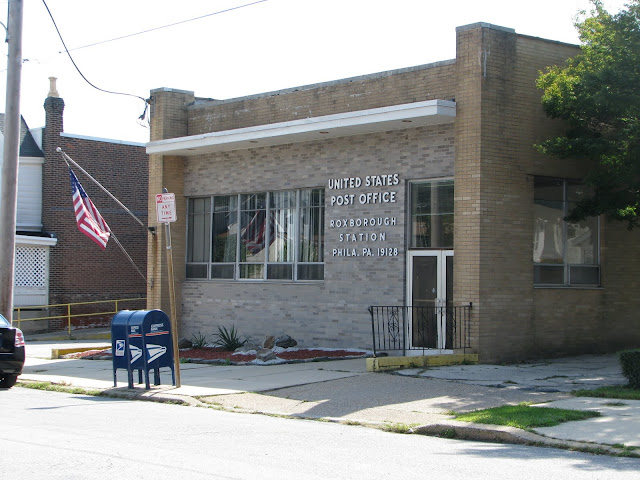 The retail operations moved a couple of blocks away, into a former movie theater.
Philadelphia, PA: Roxborough Station post office 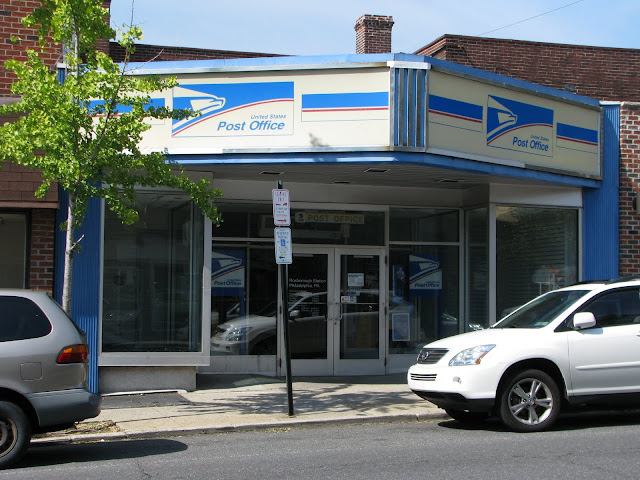 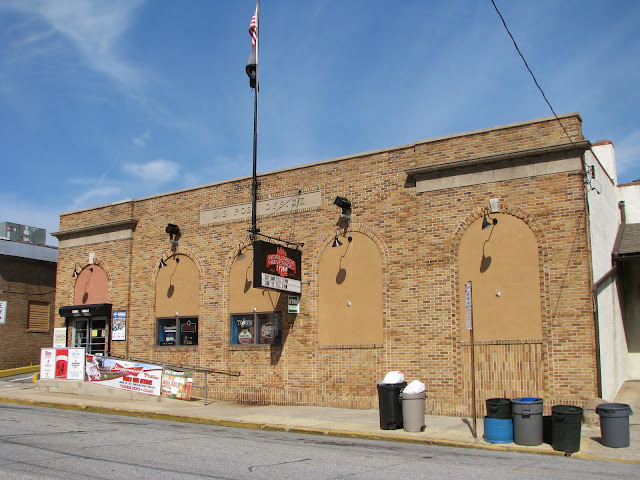 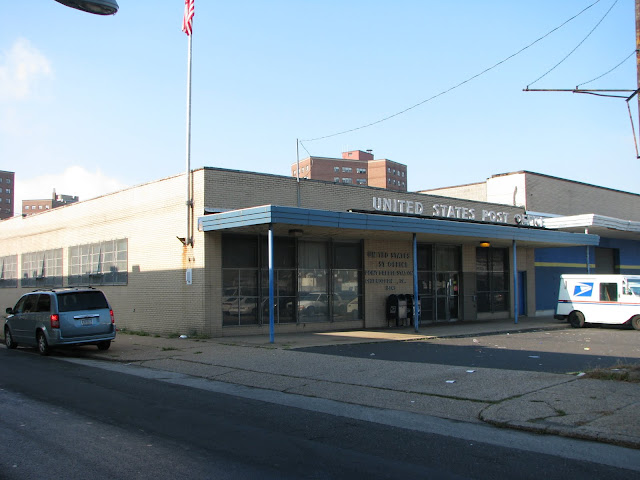 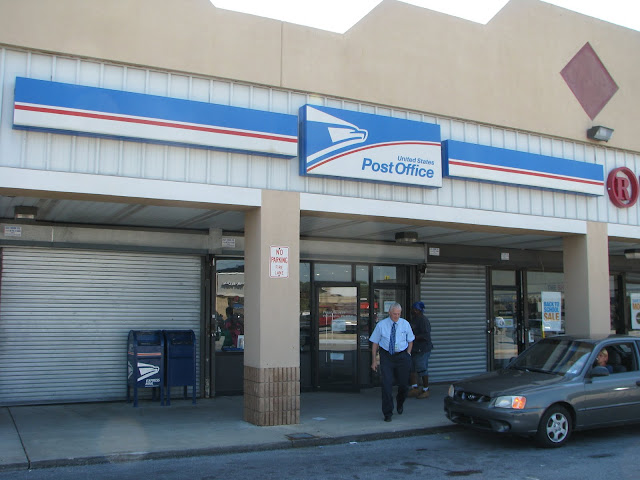 I've witnessed a couple of instances in which one town's carrier annex is attached to another town's Main Post Office. One such example is the Scarsdale, NY Carrier Annex, attached to the Hartsdale, NY post office. They occupy the same building, but the Scarsdale Postmaster runs the Annex while the Hartsdale Postmaster manages his operations separately.

Here's a view of that building, focusing on the Scarsdale Annex side: 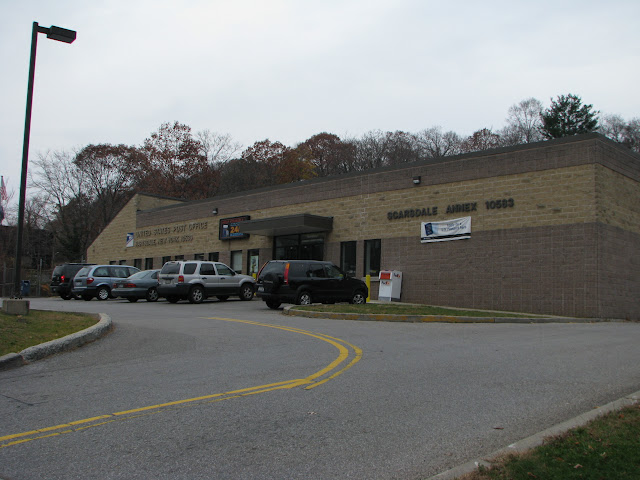 The Bear, DE post office houses the carriers for Newark ["Nu-WARK"], DE; so in the front is the Bear Post Office, and in the back is the Newark Carrier Annex. Here is the building: 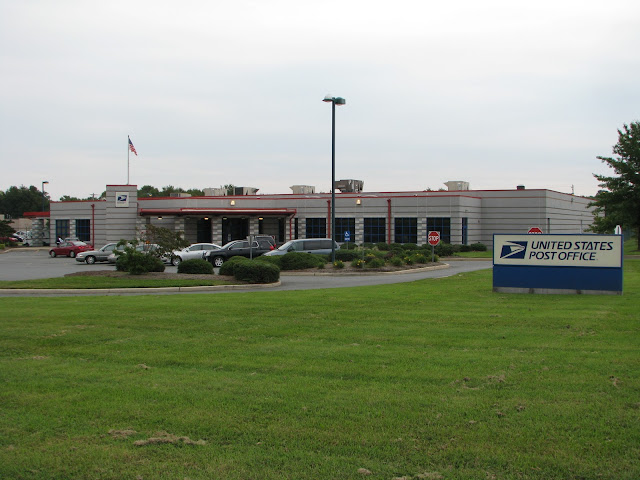 Some annexes can be rather large, like the Trenton, NJ Carrier Annex, which is located in Yardville and is located near the Main Office on Rt. 130. 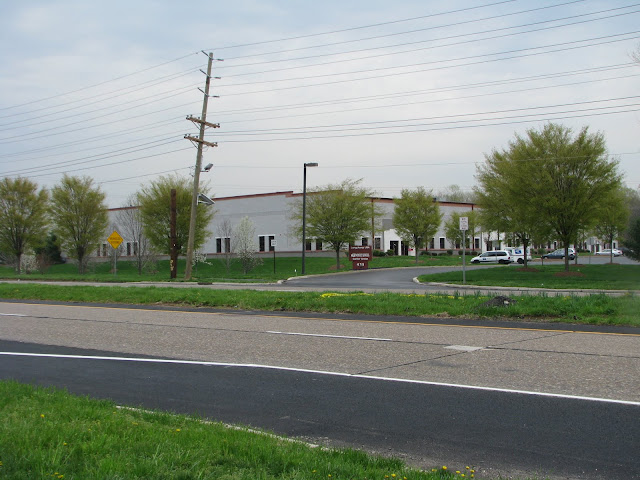 In Camden, NJ, the carriers for many ZIP codes are all located in one facility known as the Camden Delivery Distribution Center: 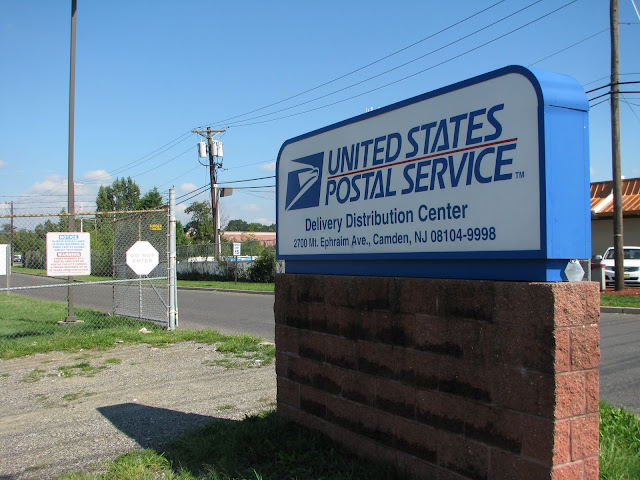 This is among those annexes that are off-limits to the general public. Only postal employees are allowed to enter. You wouldn't believe how many No Trespassing signs they have put up there. 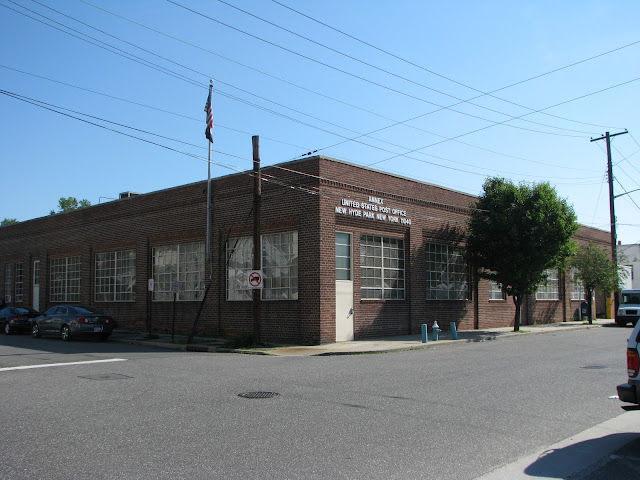 The only standalone annex in Salem, OR is known as the Hollywood DCU [Detached Carrier Unit]: 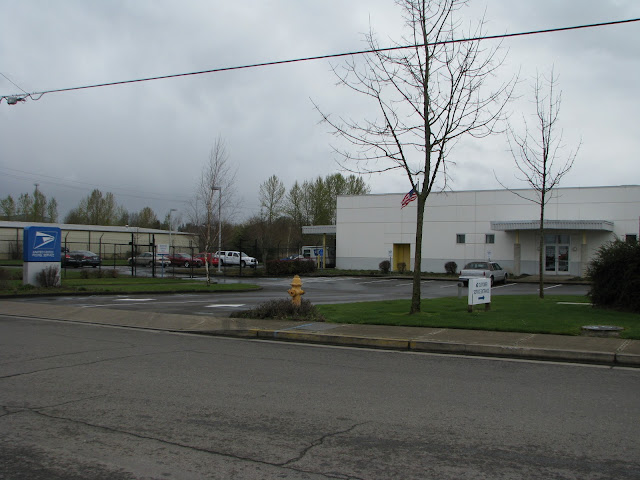 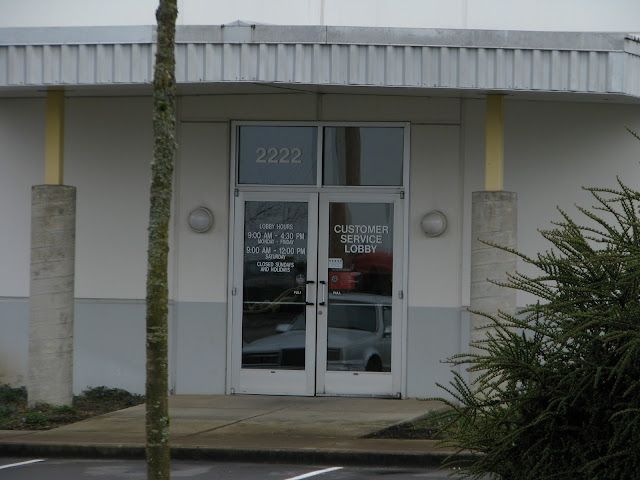 (Yep, that was off postal property; just a telephoto.) There are plenty of DCUs in the Portland, OR area as well.

In many cases, carrier annexes, which might have been founded ten years ago, are being reconnected with their long-lost retail counterparts due to the consolidation of carrier routes (or, as USPS would say, 'diminishing mail volume'). This often results in a game of what I like to call "Musical Carriers", in which (for one example I know), carriers are being moved from a Main Post Office that is being sold into two outlying carrier facilities; a few months later one of those buildings is expected to close and the carriers once again move into another or two carrier-only facilities. It's not easy being a carrier these days.

Hope you enjoyed this hodgepodge of an entry!
Posted by Evan K. at 12:23 AM