Edited 10/9/11: 5:25pm: I had some facts wrong; not all of these facilities are being studied for consolidation into the Brooklyn P&DC. Information has been revised.

Edited 5/28/2017: This entry has long merited revision, since some of my statements might have jumped the closure gun. USPS revised many of its consolidation plans well after publication of this entry. Noting that this page is cited on Wikipedia, to fact-checkers, please conduct additional research to validate more recently approved and disapproved consolidation activities. For example, as of 2017 the following facilities continue to process outgoing first-class mail from New York City and Long Island: New York, NY (Morgan Annex) and Mid-Island, NY. Brooklyn P&DC only distributes destinating mail. Queens P&DC processes packages only. The New York L&DC in Bethpage has since been renamed. And Western Nassau doesn't do too much anymore...
For those of you who don't already know, USPS not only wants to close down its small-town and poor-neighborhood post offices; it also wants to shutter half its processing plants and make our mail substantially slower as well! Yet another brilliant idea to re-invigorate the postal service and rally the American people to its side. [End sarcasm.]

Currently, Long Island [Nassau and Suffolk County for our purposes] maintains three mail processing and/or distribution facilities, each with different functions. USPS is studying the closure or reshuffling of [read: Management would like to close] just about everything. Let's see what we've got: 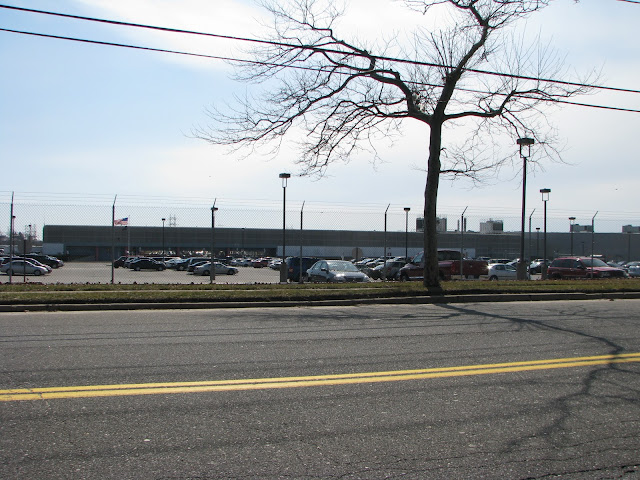 This is Long Island's heavy lifter. It takes care of the First-Mail cancellations and processing for about 190 post offices that serve 2.5+-million Long Islanders. Its spray-cancel reads "LONG ISLAND NY 117", though it also has a mechanical canceling machine whose '[stamp-]killer' is in the shape of Long Island itself! Mail processing operations from the Western Nassau P&DC [see below] have already been consolidated into this facility; USPS would like to shove the "Mid-Island Annex" into here as well. I don't know the exact function of that nearby location, but since its listed address is the same as the plant itself, the consolidation sounds rather trivial. 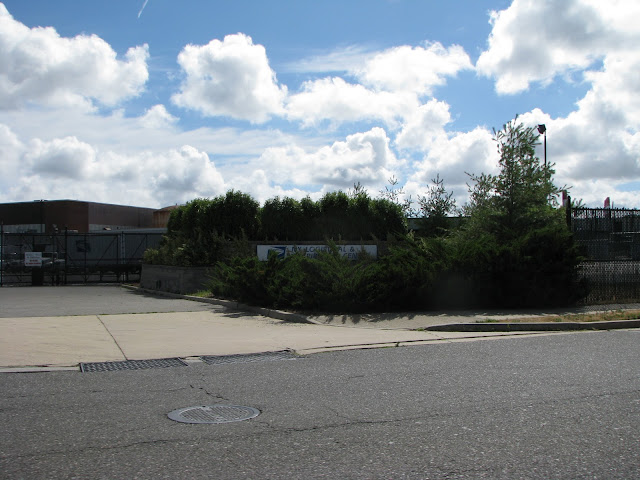 Formerly known as Priority Mail Processing Centers (PMPCs), L&DCs expedite rapid-delivery parcels. This is a positively huge facility, and based on the photo of exterior hedges above, not one the public ever gets to see. (I DID get to see a bit more of it around the back, but so as not to piss too many postal lawyers off I won't post a photo of the giant yellow cube that is the employee/visitor entrance here.) We're talking dozens of large trucks. They'd like to shove this into the smaller Western Nassau P&DC which is odd because the Western Nassau P&DC is... well, let's find out. 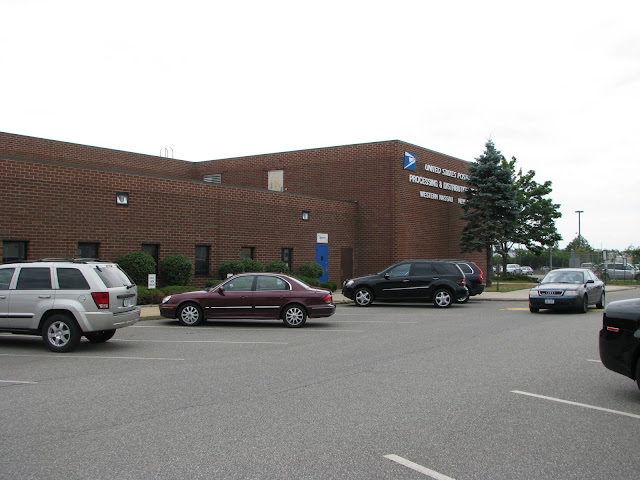 This facility no longer cancels mail; its purpose is to get the mail distributed to its local offices for final delivery to businesses and residences. Unlike the other facilities described in this post, this facility also maintains a retail window for customers. If this gets closed, I'm guessing that window would be gone as well. Now USPS is looking at taking this out of Nassau and shoving it all into the Mid-Island complex.


But wait, there's more! Act now and if you close three, you get one free! 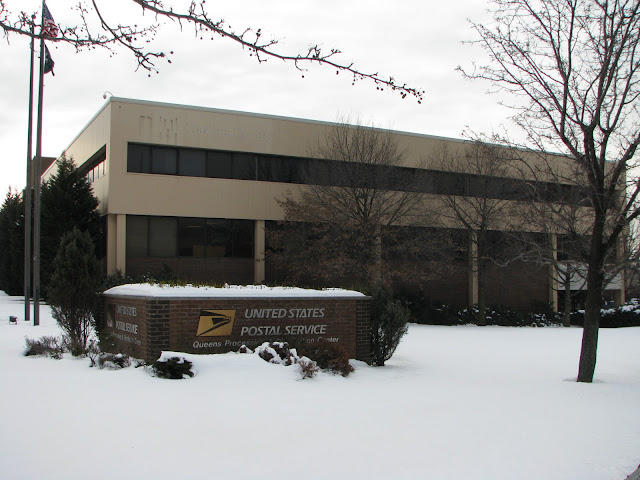 [Seen from the shopping center across the street:] 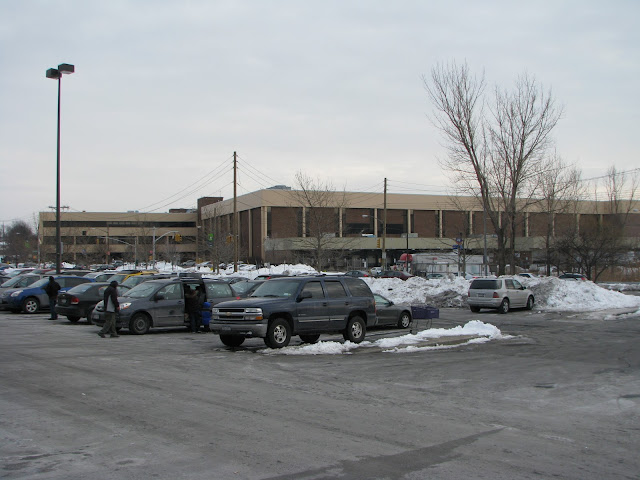 All mail cancellation and processing operations were moved from Staten Island and Queens two years ago: any mail deposited anywhere within the boroughs of Brooklyn, Queens, or Staten Island gets this handy-dandy postmark that reads "TRIBORO NY 112 // BKLYN QNS STATEN ISL // [[date]]". [The name "Triboro" is mythic and arbitrary, referring to the fact that this postal District covers Queens, Brooklyn, and Staten Island -- NOT the three boroughs connected by New York City's Triborough Bridge, for the record.] The Queens P&DC currently maintains mail distribution operations for Queens offices, but even that seems likely to be relegated to Brooklyn or the Morgan Annex in Manhattan. I think it's stupid to drive mail into Queens from Manhattan. Are they all going to depend on the L.I.E.? Consolidation into Brooklyn is likely inevitable. 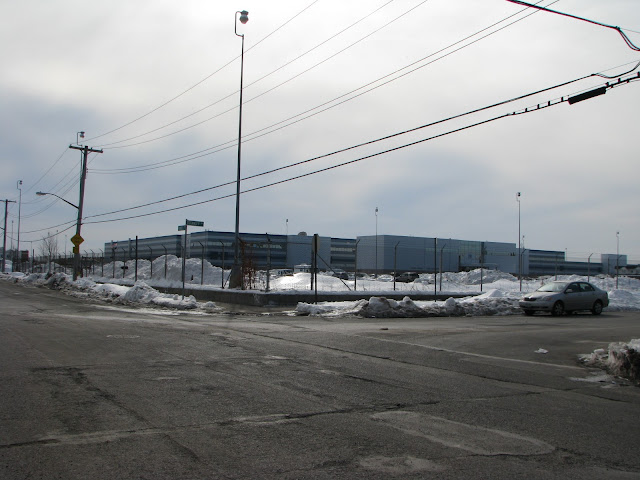 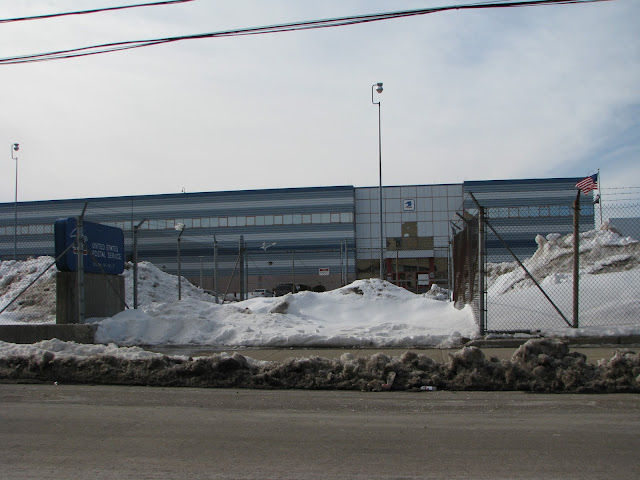 This location is positively huge. Or as some might say, it's ginormous. It's got tens of acres of floorspace, as well as postal District offices upstairs. It even has its own bus stop right in front of the primary employee entrance! Once again, since these photos were taken on public streets, off postal property, it's perfectly legal to take and publish them. You could just as easily see the same thing on Google Street View, here.

Annnd, USPS is thinking of consolidating the Brooklyn P&DC into the Morgan P&DC in western Manhattan. How would we get hundreds of additional mail trucks into and out of western Manhattan all day? No idea. To USPS management, the pluses of closing these processing facilities go beyond perceived cost efficiency. You see, each USPS plant has its own labor union, and in this instance they could effectively eliminate four entire union branches. So the whole procedure also serves as a convenient way of cutting the power of USPS's labor unions which would, of course, make it even easier for USPS to get its way in the future. With USPS's current plan, not only would half the country's mail processing infrastructure be eliminated, but 250 organized sets of workers could be wiped off the map. I should note that this is just my personal speculation, but I would still put money on it. Yet another depressing facet to the whole plan.
Posted by Evan K. at 7:25 AM