A Mark of Pride: Junedale, PA

My third-to-last stop in my relatively light 16-post office Monday was the post office in Junedale, PA -- one of the 203 post offices in Pennsylvania being "studied" for closure [read: its fate is most likely already sealed]. The town is just south of Hazleton, which itself is near the intersection of Interstates 80 and 81 in northeast PA. This was a meaningful visit for me; there was a local resident in the office who detailed to me the story of the beautiful landscaping in front of the post office. Let's take a closer look: 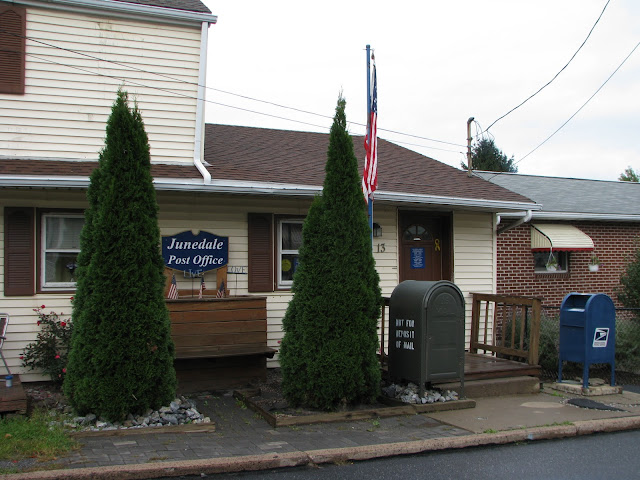 Three years ago this post office looked very different. A local Boy Scout earned his Eagle Award for providing community service. What did he do? He fixed up the front of the post office and made it beautiful.

First up: You see the trees and roses out front? This Eagle Scout planted them. The rock gardens? Also his work. If you look closely, you can see a bench right below the sign between the trees. Guess who built it! Yep, he did. He donated the new Junedale Post Office sign as well. Isn't it fantastic?

By my understanding, the final item was to extend the flag pole. Literally, he made it taller. Why? The Postmaster told me that it's because the flag used to drag on the roof of the post office. Now it waves without interference. (It wasn't windy when I arrived there, so we couldn't really see it in action; but we can see how it clears the roof, right?)

This is one anecdote that demonstrates the social importance of the post office to small communities such as Junedale across the country. Even though it's the only business in town, residents sure take pride in it. Outside the post office, when I was taking these photos, I told a resident "I hope you can keep this office open." Her response: "We do, too."

The post office suffers somewhat from a lack of parking; the main street in town isn't wide enough to maintain cars along the side of the street. (This New Yorker's solution: just leave the car wherever you please and leave the blinkers on. It worked out just fine.) The post office is on the town's main street, amongst rows of houses on either side. As with other mountain towns I'll note in later entries, it does make one somewhat appreciate the wonders of zoning, though I doubt the residents really mind being able to walk across the street to pick up their mail. (Or in a couple of cases, right next door.) 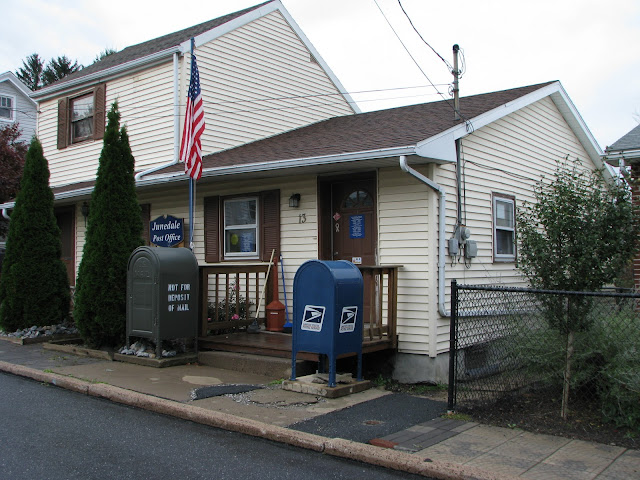 Rural communities across America are experiencing the indignity of being exposed to boilerplate 'public meetings' wherein they're basically informed that the decision has been made to close their post office. According to a resident I asked outside this post office, the public meeting felt canned and the residents felt the decision had already been made to close their office. This story was repeated to me in small towns all across Pennsylvania this weekend. Every single time I asked, I got back the exact same response.

[Note: Postal employees are actually not allowed to express views on these topics; therefore I don't solicit or publish such views from them. These views were expressed by concerned residents, not by our nation's fine Postmasters, clerks, or anyone else affiliated with USPS.]

Back inside the post office, I did ask the Postmaster how long she had worked at the office: 18 years. Doing a bit of research on Postmaster Finder, it would be 19 right when USPS is likely to close her office.

I did ask the Postmaster for a bit of history about the town. The town was formerly known as Coleraine; indeed, there is a Coleraine Welsh Congregational Church in town. Why does that sound an awful lot like 'coal'? Well, it's the middle of Pennsylvania.. need I say more? Even further back in time, the town was known as Leviston. The area was generally settled in the early 1800s as a coal mine.

Local legend has it that that car featured in the movie Titanic -- you know, the one Jack and Rose made steamy in -- was actually supposed to end up in Junedale: the local baron's new toy.

Junedale is an example of a post office wherein the Postmaster really cares to serve her community. Residents are known to use Junedale Post Office monthly planners, pens, and refrigerator magnets [all free of charge!]. All provide the office's phone number, and the magnet also contains the address and the office's working hours. They state "Thanks for being a loyal customer," and the residents love the office indeed. The Postmaster creates the items out-of-pocket.

Herein lies the irony: While the 2012 monthly planner has already been ordered, there might not be a Junedale post office as of the beginning of next year.
Posted by Evan K. at 6:45 PM